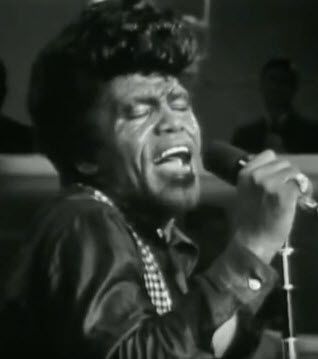 James Brown, all four songs from “The T.A.M.I. Show” 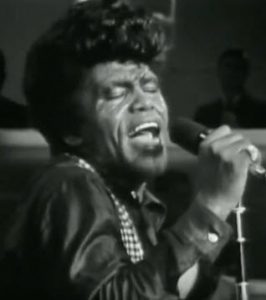 In December, 1964, a legendary music video was made called “The T.A.M.I. Show”.  It’s notable because there’s a remarkable roster of stars of the day giving career-defining performances which were captured on an early version of hi-definition TV.

And it’s remembered frequently because The Rolling Stones agreed to follow James Brown (and close the show), which both Keith and Mick still good-naturedly rue today as the biggest mistake of their careers.

I admit I’ve never been a big fan of James Brown, even though I’m aware that behind the pro wrestling façade of silly drama and staged emoting, he is a musician’s musician, together with his Famous Flames. As a bandleader and performer, “The Godfather of Soul” is considered the epitome of tightness in all aspects of performance, not to mention being the inventor of funk and the source of what Michael Jackson bleached and diluted with such great success.

But I do admit that the four songs he performs on The T.A.M.I. Show are probably the most intense and exciting performance I’ve ever seen. 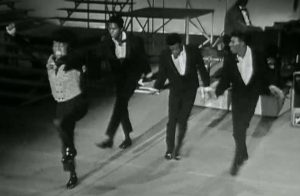 James Brown is a better performer than I am a writer, so I’m not even going to try to describe in mere words how energy-charged these performances are. How you’re really admiring The Famous Flames’ moves (in ‘Please, Please, Please), and then you see James stomping his feet like a baby throwing a tantrum, and get that he’s stomping in perfect triple time. Or how he falls to his knees in utter faux counterfeit exhaustion and lands SLAM! on the downbeat.

Seeing is believing. Or in this case, maybe not. It was Edgar Allan Poe (of all people) who wrote “Believe nothing you hear, and only one half that you see.” Apparently Edgar had seen The T.A.M.I. Show.

James Brown ‘warms up’ with ‘Out of Sight’ and ‘Prisoner of Love’. ‘Warms up’ is somewhat of a misnomer, since the heat he generates there can compete with that generated by the sun on a Nevada afternoon in mid-July. But even that unlucky old sun can’t compete with ‘Please, Please, Please’ and especially the encore ‘Night Train’. 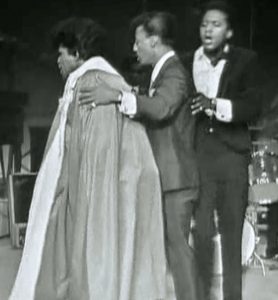 ‘Please, Please, Please’ showcases his dancing and introduces the WWE cape-trick routine. It really does defy the imagination. But wait. Then comes the finale:

‘Night Train’, his encore, includes no less than six false endings, and everyone’s on their feet, screaming for him to come back: the 14-year old black girls, the 14-year old white girls, the band, the three backup singers, and you, and me. All of us. And we really mean it.

But today I’d like to take a look at the musical backdrop to The T.A.M.I. Show.

As a kid, I was a member of the Caucasion persuasion, so I listened to white pop stations. The black music I was exposed to consisted mostly of black music in white face (Johnny Mathis, Nancy Wilson) or black music diluted till it was a very light shade of ebony (The Supremes).

Heaven only knows how WSAI compiled the Top 40 charts which were the maps of my youth. An amalgam of sales, quirky taste and payola, I’d assume. Let’s take the 1964 Top 50 as an example. The mainstays were no surprise: Beatles (five songs), surf music (three), Motown (three), the Four Seasons (two), the early British Invasion (three) —they were indeed what my friends and I listened to. 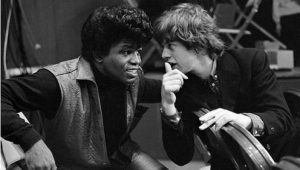 But there was always a strong presence of impossible white boxer shorts, Republican-voting ‘hits’ that no one I knew had ever willingly sat through, let along purchased:  ‘Hello, Dolly’, Louis Armstrong (#3); ‘Everybody Loves somebody’, Dean Martin (#10); ‘Dominique’ The Singing Nun, (#11); ‘Java’, Al Hirt.

On the far end of the spectrum, you also had the occasional real R&B hits sneaking in: Rufus Thomas’ ‘Walkin’ the Dog’(#41) and Garnett Mimms’ ‘Cry Baby’ (#50).

What’s the difference between those two and the other black artists on the chart? You got your Motowns, ranging from pop-light whitefaced ‘Where Did Our Love Go’, the Supremes (#15); to smooth, commercial but with James Jamerson’s so-cool ‘Canadian Sunset’ bass   on ‘My Guy’, Mary Wells (#7); all the way to ‘Can I Get a Witness’, Marvin Gaye (#34), displaying some real grit.

And then you have an amazing sundry group of ‘others’:

So in 1964, the heyday of the Civil Rights Movement, radio was still segregated. But look at the audience of The T.A.M.I. Show. Free tickets had been distributed to local Santa Monica high school students. Look at the shots of the audience during James Brown’s set:  white teenie-boppers screaming at black acts together with black teenie-boppers screaming at white acts. That’s what social change looked like in real life. Well, ‘real life’ for those of us for whom the music was the mainstay of our reality.

The pictures here are all in black and white. But in a very short time, everything would be multicolored.

Of course, the late 60s race riots were just around the corner. But already for us in 1964, it was clear that a change was gonna come.

James, a belated tip of the hat.  I just watched ‘Night Train’ for the umpteenth time – and I still only half believe it.