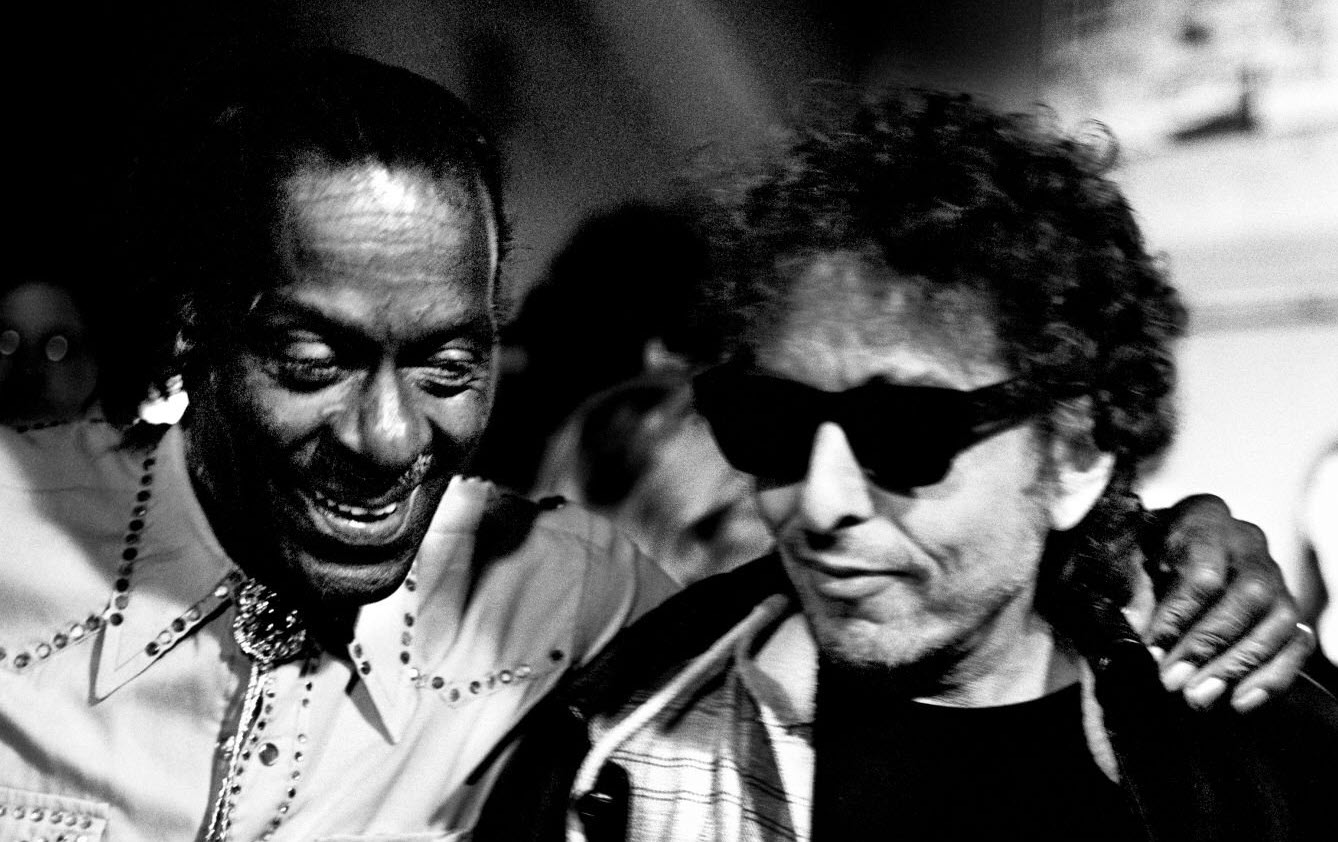 Chuck Berry – ‘Too Much Monkey Business’ 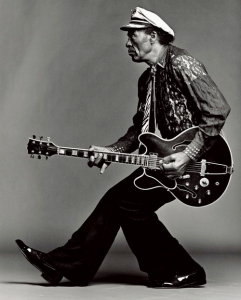 I don’t know bubkes about hip-hop, and I can’t say I feel any pervasive sense of inadequacy or overwhelming need to learn. The sum total of my ignorance is from good old Wikipedia: Hip Hop “usually refers to Hip-Hop music, aka MCing, aka rapping. But Hip-Hop culcha is also marked by DJing/scratching, breakdancing, and graffiti writing.” There’s some conceptual dissonance in the parallelism of that list, but I guess that’s the point.

I’ve heard enough of it at the gym to know that ‘rapping’ is rhymed verse to chanted a strong 4/4 beat and the attitude is distinctly anti-establishment. There’s Gangsta Rap, there’s West Coast rap, but there’s apparently no Trumpian rap – unless I missed something by Pat Boone.

The origins of rap have been attributed to everything from Pigmeat Markam’s ‘Here Come the Judge’ (1968, Chess Records) to the opening scene of “Music Man” (1962) to Glenn Miller’s ‘The Lady’s in Love with You’ (1939), not to mention Woody Guthrie’s talking blues, Gilbert & Sullivan and the Beat Poets. 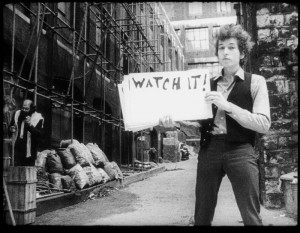 Even Rolling Stone Magazine has asked “Is Bob Dylan Hip-Hop’s Godfather?” Sure, there’s the obvious heavy, in-your-face, chunky, chutzpadik rhyming, performed by a sullen, gum-chewing, too-inured-to-touch punk. Oh, the world’s such a mess but I’m so cool.

Of course, the quintessential expression of that particular Dylan persona is ‘Subterranean Homesick Blues’, the opening track on “Bringing It All Back Home” (March, 1965). This was a few months before the infamous Newport Folk Festival Fiasco. The album was the public’s first exposure to Electric Bob, ‘Subterranean Homesick Blues’ the first-punch KO.

It’s eight minutes of frenetic, seditious lyrics packed into 2:22, immortalized by the famous visual gag in D.A. Pennebaker’s documentary “Don’t Look Back”, in which Poker-Faced Bob peels off key words in a series of cardboard signs in an alley with Allen Ginsberg (in a tallis?) chatting in the background. 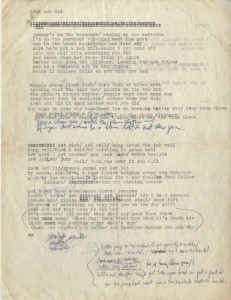 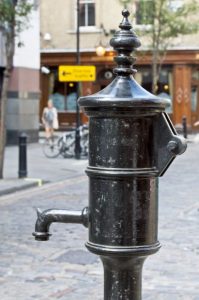 The song’s impact was ubiquitous. John Lennon was so overwhelmed when he first heard it, he was quoted as saying he didn’t know how he would ever compete. The Weathermen, the 1960s radical terrorist group, took their name from the song’s famous line, “you don’t need a weatherman to know which way the wind blows.” (The Weathermen went on to bomb several political targets in the late Sixties.) A 2007 study of legal opinions and briefs found that that was the song line most often cited by judges and lawyers. For many of us, ‘Twenty years of schoolin’ and they put you on the day shift’ expressed the essence of the baby boomers’ abrupt collision with economic reality. (My first job after graduating with a BA in English Lit in 1970 was the night shift in a Pepsi Cola bottling factory.) 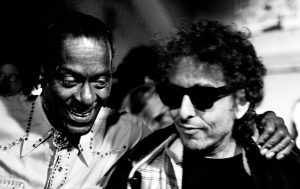 Detail from Photo by Anton Corbijn

But the line my friends and I loved most was ‘The pump don’t work ‘cause the vandals took the handles.’ Fifty years on, it still loiters around my consciousness.

So if ‘SHB’ is the daddy of rap, who’s its forefather? Dylan: “It’s from Chuck Berry, a bit of ‘Too Much Monkey Business’ and some of the scat songs of the Forties.”

If you had to pick one person to credit as the father of rock and roll, it would probably be Charles Edward Anderson Berry (1926-2017).  Brian Wilson says Chuck wrote “all of the great songs and came up with all the rock & roll beats.” And Brian should know. John Lennon said, “If you tried to give rock and roll another name, you might call it ‘Chuck Berry’.” We’re not going to try to discuss the totality of Chuck’s songwriting, guitarism, lyric sophistication, showmanship, or musical impact here. His oeuvre and artistry won’t share the stage with anyone. Today we just want to credit him as

The Grandaddy of Rap 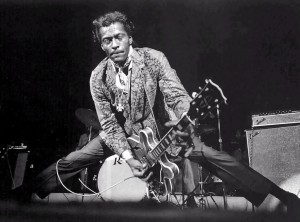 When Chuck received the PEN award from the JFK Library, Dylan wrote him: “To Chuck, the Shakespeare of rock and roll, congratulations on your PEN award, that’s what too much monkey business will get ya… Say hello to Mr. Leonard [Cohen, another recipient], Kafka of the blues, and Lord Byron Keith (Richards) if he shows up. In all seriousness, Chuck, congratulations on this prestigious honor. You have indeed written the book with a capital B, and congratulations to Leonard, who’s still writing it – Bob Dylan”

‘Too Much Monkey Business’ was released as the B Side of ‘Brown Eyed Handsome Man’ (a 1956 euphemism for ‘brown-skinned’). The insistent beat, rapid rhymes, monotonous reliance on a single chord, the disaffected litany of kvetching – people who know a lot more than I do about rap have credited it as a seminal progenitor. (Listening to the guitar solo, I can’t help but remember a take on it that I saw in a Mothers of Invention concert in 1966 – Frank Zappa playing the guitar break on ‘Louie, Louie’, a single note that must have gone on for three minutes.)

Here’s Chuck performing it with acolyte Keith Richards in 1987. He may be past his prime, but check out his dance at 1:20 in the clip. Here’s Hippie Chuck performing ‘Monkey Business’ in 1969. And just to remember what he looked like in his hey-day (1959), here he is performing ‘Little Queenie’. 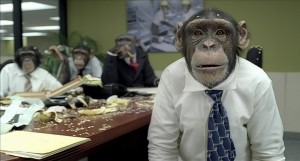 ‘Too Much Monkey Business’ isn’t even one of Chuck’s dozen greatest songs, but it is one of his most influential. It’s been covered by no less than Elvis (a knock-out treatment, well worth listening to), The Beatles (a live BBC recording), and other British Invaders such as The Hollies (that’s Graham Nash with the white guitar), The Kinks, and Eric Clapton and the Yardbirds (1964).

So, hey, all you hotshot gangstas out there – who da meanest mothafucker on da block? Y’all listen up to yo’ grandaddy:

Salesman talking to me,/Tryin’ to run me up a creek,/Says you can buy it, go on try it,/You can pay me next week–Ahh–/Too much monkey business…

Blonde hair, good-lookin’,/Trying to get me hooked,/Wants me to marry, get a home,/Settle down, write a book./Too much monkey business, …