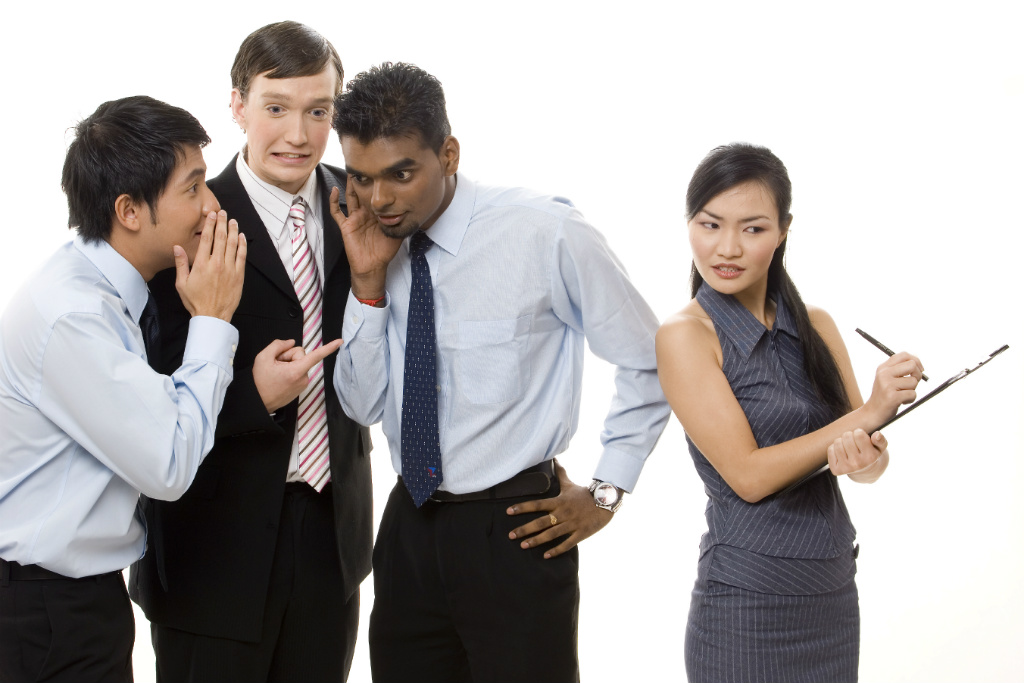 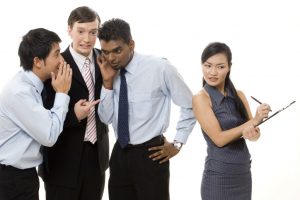 Hah! I fooled you!!
I dangled this Grammy Hall of Fame song in front of you and you bit. Sucker!

But, okay, you paid your admission, so here goes: the shortest treatment of a SoTW ever. 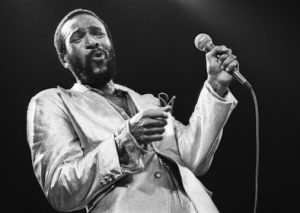 History: ‘I Heard It Through the Grapevine’ was written by Barrett ‘Money (That’s What I Want)’ Strong and Norman Whitfield, first hit for the team (‘Papa Was a Rolling Stone’, ‘Ain’t Too Proud to Beg’) that fathered Motown’s psychedelic soul. IHiTtG was recorded (in order) by:

and released (in order) by: 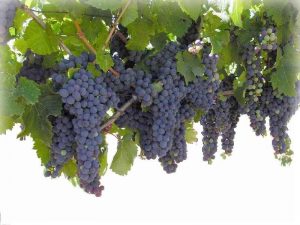 Appraisal: It’s a pretty fine song, with appropriate Motownic infectious melodic hooks, a memorable verbal cue, a great vocal, and one frigging incredible Motown production, with strings supplied by the Detroit Symphony. The metaphor of spreading rumors by word of mouth as a human grapevine is attributed to the mode of communication employed by black slaves in America. In the song, the narrator discovers through the grapevine that he’s being cheated upon.

But what we really want to talk about today is Lawrence Kasdan’s brilliant extradiegetic (I also had to look it up) use of Marvin’s ‘Grapevine’ for the opening sequence of “The Big Chill” (1983), showing each of the main characters learning (through the ‘grapevine’) about the death of their college friend and reunioning at his funeral – sans dialog. Put me on hold for four minutes. It’s a fine piece of cinematic exposition.

What was so resonant about “The Big Chill”? It portrays a group of baby-boomer college buddies, 15-20 years after graduation, mired in their various adultish lives – wishing they had a partner, wishing they didn’t, or just bored flaccid. We all left our hearts in college, didn’t we? When every day was an adventure, when we were all handsome and hot and sexy and adventurous and witty and optimistic. And now in our 40s, we’re just plain numbed and on a fast track to old age. Who doesn’t identify? 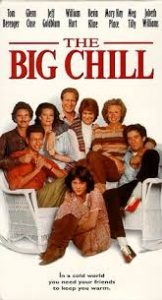 William Hurt (b. 1950), angrily: “It was easy back then, no one had a cushier birth than we did, it’s not surprising our friendship could survive that.”

The Big Chill: In 1983, writer-director Lawrence Kasden (b. 1949) killed (and then cutting-room floored) poor Kevin Costner in order to bring the old college gang together to seek some solace in each other’s company, a wake of a homecoming weekend. In reality, we were mired in our jobs and diapers and car insurance. But at night, we could potato up on the couch and in our minds bop to ‘Ain’t Too Proud to Beg’ in the kitchen with our ex-besties.
For at least one weekend, we’re back in college. 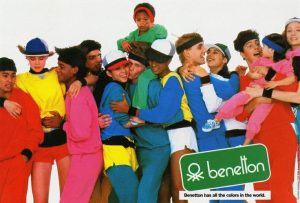 Benetton: In 1984, Madison Avenue sensed the appeal of a row of very handsome young adults (sometimes peppered with cute kids) all standing in a row looking cool and relaxed, a rainbow of individuals, shades in a collective spectrum. The buddyhood meme has arrived.
Want to belong? Want lots of cool friends? Just buy our sweaters. 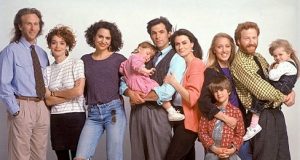 ther not for one weekend, not to sell sweaters, but for a 4-season run? So they created ‘thirtysomething‘, a gang of seven, replete with jobs and kids and singledom and endless naval-contemplating yuppie angst cohered not by mortem ex machina, but by personal individual commitment to the septangle itself.
What if we could live our real lives, but with friends? 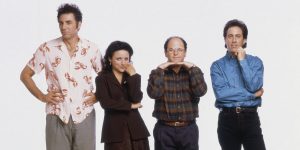 Seinfeld: In 1989, Jerry Seinfeld (b. 1954) and Larry David (b. 1947) figured out that Real Life was an obstacle to humor, so they jauntily dispensed of it. Re-enter post-adolescent group nihilism.  We don’t have jobs, we don’t even have exams, but we sure do have friends.
Buddy-hood sans reality. So much easier that way.


Friends: Then in 1994, three young suits (b. 1953, 1954, 1957) mixed 30something-ish Life Lite with Seinfeld vacuity in a 22-minute sitcom package, complete with laugh track. Six Peter Pans subsisting on coffee and sex. Jump back into the fountain of youth (arrested development) with us, right after this word from our sponsor. 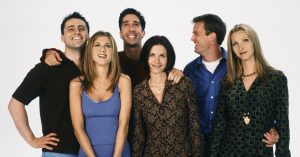 Getting older without growing up – what more could an aging baby-boomer ask for?

Just to get the record straight—IMHO (in my haughty opinion):

Not that I’m so grown-up. I’m willing to pitch my immaturity against anyone’s. Just ask my wife. I find regular attendance at the house of worship of my choice a venue preferable to Central Perk or even Michael and Hope’s living room for nurturing buddy-ship. I really do meet real friends there, in real life, on a weekly basis (same time, same station). Or at least I did before the plague.

I’m a social animal, compulsively gregarious, a snob who watches as much TV as I did when I was chronologically still a Jung ‘un. I won’t grow up! I don’t have to!! How do I know?

I heard it through the grapevine.