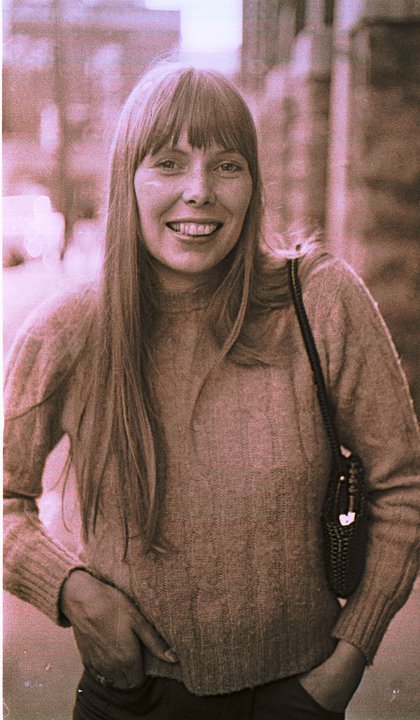 It seems our Joni is the Lady of the Hour, so I’m going to share with you the whole shaggydog tale of how I encountered her, how I fell in love with her, and how I broke her heart. Okay, hurt her feelings. A little bit. Maybe. Or not. Whatever.

First Flowers in a Fertile Field

Rebellious young Joni Anderson left Saskatoon, Saskatchewan at 21 for Toronto, to become a folk singer. She got pregnant, gave the baby away for adoption, married a folk singer named Chuck Mitchell, and began playing around Detroit and the East Coast. A prolific songwriter even then, a number of her songs were picked up in 1967 by well-known folkies – Tom Rush (‘Urge for Going’), Judy Collins (‘Both Sides Now’, ‘Michael from Mountains’, ‘Chelsea Morning’), Buffy Saint-Marie (‘The Circle Game’), Fairport Convention (‘Eastern Rain’). In early 1967 her marriage dissolved, and she moved by herself to New York City. David Crosby, recently expelled from The Byrds for overall weirdness, heard her singing in a club in Coconut Grove,Florida, and convinced lean and hungry Reprise Records to let him produce her in an acoustic album. 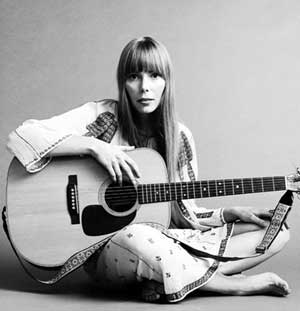 What was brand new when her album was released? “The Notorious Byrd Brothers”, “The Graduate” soundtrack, the first Blood, Sweat & Tears, Otis Redding’s “Dock of the Bay”, Vanilla Fudge’s “The Beat Goes On”, the Mothers of Invention’s “We’re Only In it For the Money”, Dylan’s “John Wesley Harding”, Traffic’s “Mr Fantasy”, The Stones’ “Their Satanic Majesties’ Request”, Laura Nyro’s “Eli and the 13th Confession”, Leonard Cohen’s first album. 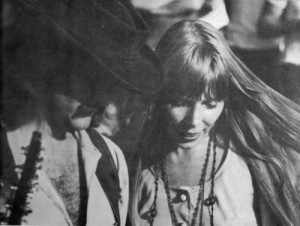 What excited me when I first saw “Song to a Seagull” on the shelf? Not the mother-earth hippie queen look (Judy Collins had already ruined that niche), not the music (I’d vaguely heard of ‘Urge for Going’, and Judy Collins’ ‘Both Sides Now’ was cloyingly diabetes-inducing). It was the small print on the back of the album, Produced by David Crosby, Bass by Stephen Stills (the driving force behind the still-extant Buffalo Springfield). The best member of The Byrds collaborating with the best member of Buffalo Springfield? Both with a melodic, acoustic bent? Wow, that could be a really fruitful partnership. This was months before I read a blurb in Rolling Stone that the two of them were hanging out with an ex-Hollie, thinking of forming a new group. Of course, CS&N, together with Joni Mitchell, would soon form the core of a Laurel Canyon social and sexual circle which would produce some of the best music in the last half century.

The Day I Broke Joni’s Heart 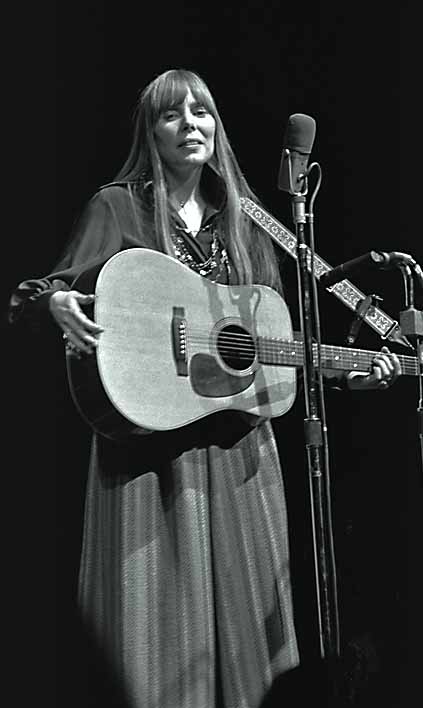 I met Joni Mitchell once, for a brief moment—in Nashville, outside the Grand Ole Opry, on June 17, 1969, where I had driven with my friend and photographer (now author) Rod Pennington to see Bob Dylan make his first announced appearance in two full years, on The Johnny Cash Show. It felt like were the only two long-hairs in the entire Confederacy. We were hanging around the artists’ entrance when Joni drove up. I was virtually the only person in Tennessee who had ever heard of Dylan, let alone Joni Mitchell. I was chatting with her when Dylan Himself drove up. Rod tells me I jettisoned Joni in mid-sentence to run and catch a glimpse of the living legend, and that she looked rather hurt.

I’d like to take this opportunity to apologize in public, Joni. I hope you’ve gotten over the incident.

But I’ve had a long and intense musical relationship with Joni for these 50-some years now. In each of the first eight years of her recording career she created a masterpiece. Some were love at first hearing, some took me even decades to embrace. One thing I’ve learned with Joni Mitchell – the more you focus and dig and concentrate and delve, the more you discover. You always get more than your money’s worth. 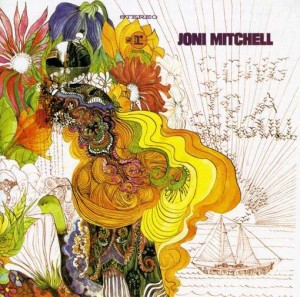 “Song to a Seagull” is one of her more elusive albums. The next two, “Clouds” and “Ladies of the Canyon” were chock full of memorable songs–’Both Sides Now’, ‘Chelsea Morning’, ‘(He Sang Real Good) For Free’, ‘Woodstock’, ‘Big Yellow Taxi’, ‘The Circle Game’. But this first album had only three songs which reached out to grab even a serious listener, the first three cuts on the album, all energetic, melodic, thematically clear, accessible, even memorable–. But then comes a series of six minor songs in minor keys. Then our SoTW, ‘Cactus Tree’, the last track, hiding behind that six-song string of bummers.

The album is a series of thematically connected vignettes. The liner notes indicated that the 10 songs were divided into two cycles, “I Came to the City” and “Out of the City and Down to the Seaside”. The auteur speaks in a clear, distinct voice throughout, spinning her tapestry of events and relationships in the cusp of freedom; her home, her child, her marriage, even her struggle for recognition all left behind. Now she’s in New York, she’s getting acclaim, she’s having relationships. Even the weak songs combine to give a rich picture of this life. ‘Marcie‘ a solitary, anonymous young woman, lost in the city (covered by Chris Thile/Brad Mehldau). ‘Nathan La Franeer’, her encounter with a rapacious cabbie. ‘Sisotowbell Lane‘, an idyll of domestic bliss, replete with rocking chairs and curtains. ‘Dawntreader‘, which sinks in the obscurity of “peridots and periwinkle blue medallions”. ‘The Pirate Of Penance’, a seafaring allegory. ‘Song to a Seagull‘, strong lyrically, but underdeveloped melodically.

Mama Cass, Mary Travers & Joni Mitchell – I Shall Be Released 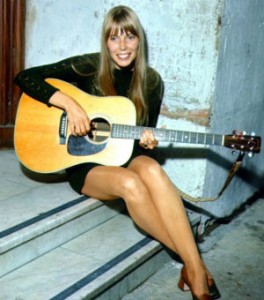 But before them we have the three gems that open the album. ‘I Had a King’, a declaration of independence from her ex-husband, moving on with determination, without regrets or recriminations (“There’s no one to blame/No there’s no one to name as a traitor here”). It’s immediately followed by ‘Michael from Mountains’ an exhilarating paean to new-found love, a beautiful, weaving melody, a stunning performance, a moving song. And then the best song on the album, ‘Night in the City’. It’s the only really produced song on the album, Joni on guitars, Joni on tinkly piano (the only cut to use a keyboard), a great vocal canon, Stills’ knockout bass, giving an impetus to the mix that renders drums unnecessary.

Most of the little I understand of the female psyche I’ve learned from Joni Mitchell. I don’t take her to be emblematic of Womanhood. She’s an individual, with a unique vision of the world, but one that is profoundly female. She has thoughts and feelings and desires and disinclinations that seem to me engendered in that other side of the fence, visions and versions that would never cross my testeronic landscape. 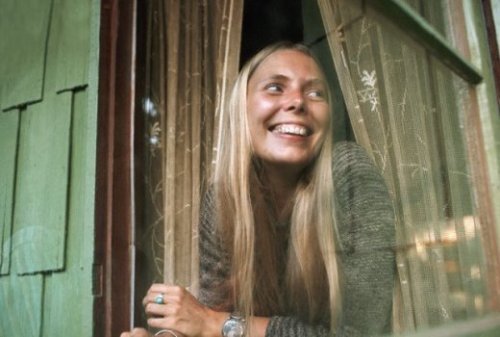 ‘Cactus Tree’ is a catalogue of her ex-lovers. She’s new to the city, untethered and unbridled, liberated, exploiting to the fullest the sexual freedom just becoming available to the fairer sex circa the spring of 1968. The imagery is seaside hippie throughout, the schooners and the beads and the flowers and the harbors. And her endless list of lovers, flaunting her freedom/promiscuity.

The first three verses talk about one man each, a sailor and a mountain man and a businessman, him wanting her, her valuing her freedom too much to commit. Remarkably, she presents the view of the relationship through the men’s eyes, not through her own. It’s such a personal, intimate song—yet she chooses to spend most of it looking through the male eyes, perhaps to define her ‘self’ via her lovers. 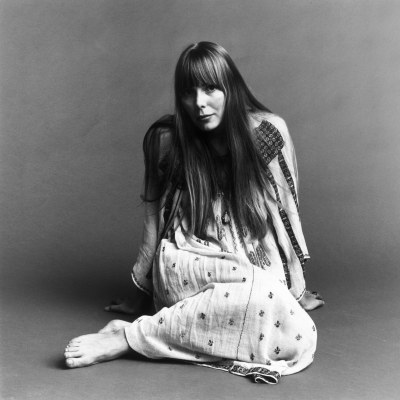 At the beginning of the fourth verse, our narrator appears casually, almost obscured in the crowd of her lovers – “There’s a lady in the city and she thinks she loves them all.” ‘Love’, Joni? She has a genuine affection towards each and every one, albeit transient. But we’re talking about a girl who knows how to have a good time. Every night, a new good time.

“She has brought them to her senses” –  not ‘brought them to their senses’, because she’s done the opposite, she’s confused them. How has she done that? With her womanly passion, by making love to them, by taking them to her sensual place, the place of her senses. “They have laughed inside her laughter”, profoundly intimate, but not too serious. “She rallies her defenses”–you can come inside me, you can laugh with me inside me, but only for a little while. Then you have to go, because I have to go. “For she fears that one will ask her for eternity–and she’s so busy being free.”

“She will love them when she sees them,” each and every one on his own terms. For the time that she sees him. Till she moves on. And if they try to hold her, they lose her. Don’t forget, this was March, 1968—the very dawn of the sexual revolution. Prior to this, women did not have sex outside marriage. Certainly not with innumerable partners. Or at least they didn’t talk about it. 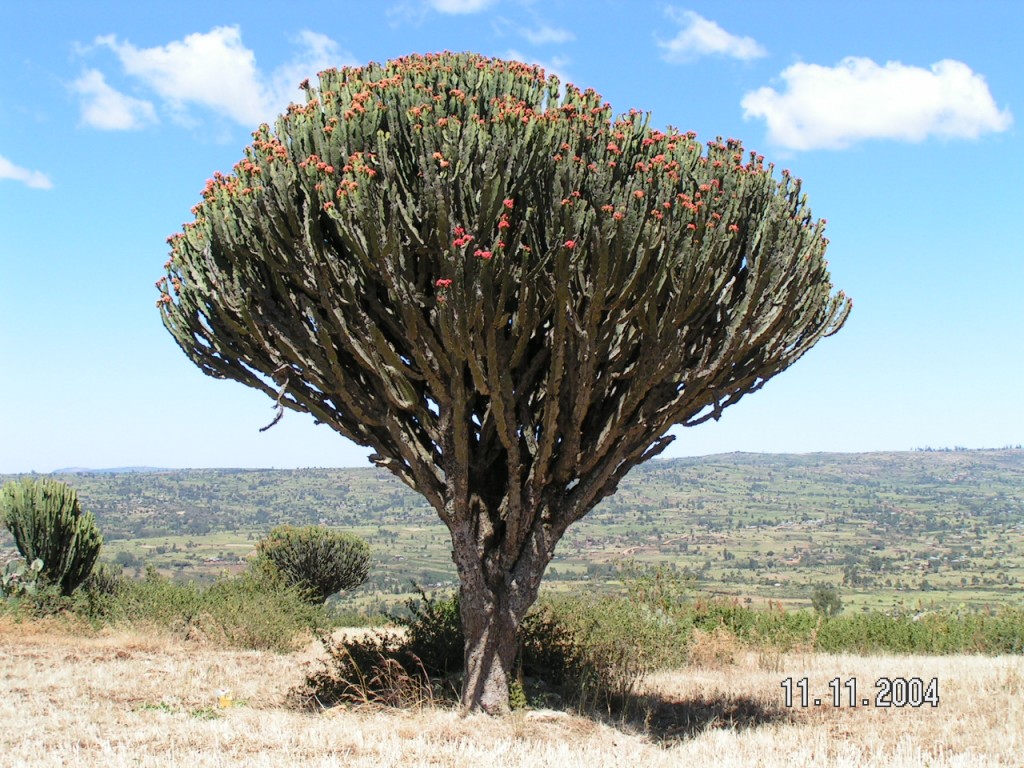 And then that evocative line, ‘you know there may be more’. On the recorded version, there’s catch in her voice–second thoughts? Regrets? Confession? It’s certainly not ‘matter-of-factual’.  She has doubts about her butterflyness? The vestiges of her mother’s moral system? Self-criticism that this is her limited and limiting modus operandi?

“She only means to please them”. That’s the key line for me. A man’s ultimate goal is to achieve pleasure. A woman’s ultimate goal is to give pleasure. It’s hardwired into our brains and our psyches and our genitalia. But “Her heart is full and hollow like a cactus tree”. Who knows if a cactus tree really is full and hollow? Go ask a botanist, but who cares? Joni knows, and that’s all that matters.

Two years later, in this stunning performance on the BBC, there is no catch in her voice. But the melody is so melancholy. So what’s the point? My gut tells me that she’s undercutting the validity of the narrator’s point of view, that we aren’t meant to buy into it without reservation, that there’s an implicit self-criticism, the speaker towards her life, Joni toward her song, the listener towards the work of art. That she’s too busy being free. Joni’s a consummate enough artist to work on that level of complexity. But that’s certainly arguable here. Indeed, 54 years later, I continue to debate it with myself.

And this is just the first album. “And you know there may be more.” Well, there were, another seven or so masterpieces. And her relationships deepened, and she got her very large heart broken. Over and over. And in her magnanimous femininity, she invites us in to partake of it all. She brings us to her senses. Thanks, Joni.