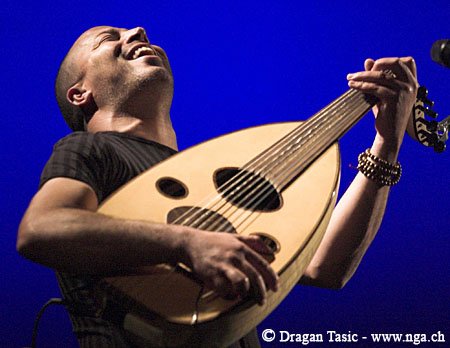 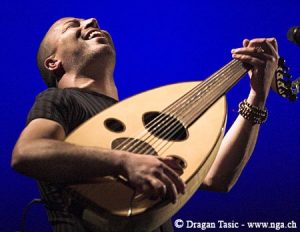 Summer, 1968, I’m volunteering on a kibbutz in Israel. There’s a copy of “Sgt Pepper” (only a year old,  less of a household ikon than it is today). There’s a cool Indian guy on ulpan. He’s heard of The Beatles, but not of Sgt P. “You have to hear it!” I tell him. “George Harrison, the guitarist, plays sitar, and they use a tabla and a tamboura and stuff. They’re playing Indian music!” 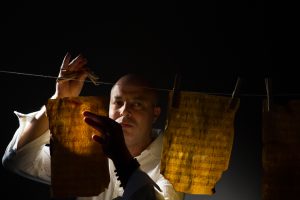 I drag him. He listens attentively, lolling his head sagaciously. At the end he looks up with a big grin displaying his pearly teeth and chirps affirmingly: “Rock and roll!”

Since then, I’ve been very careful not to make assumptions or judgments in cultures (musics) whose basic vocabulary is foreign to me.

That being said, the Dhafer Youssef quartet, with Tigran Hamasyan on piano, creates the best music I’ve heard in years. If I gave grades to music, I would give this 100.

Now, Dhafer hails from Tunisia, Tigran from Armenia. I live midway between Tunisia and Armenia, but I speak neither language. They met in Paris, where they were both playing jazz. I do speak some jazz, and have no difficulty following their quatralogue here. Even if some of it is in an exotic accent. Who knows, perhaps due to that. 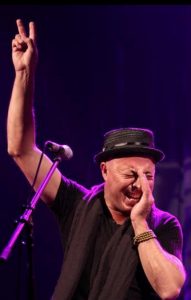 A while back I wrote a post about Tigran Hamasyan in which I was rather overwhelmed by the breadth and variety of his musical projects. I’ve been listening to him ever since, of course, and this collaboration with Dhafer brings a critical point into clearer focus for me: Tigran Hamasyan is for my money the most interesting jazz pianist working today. He’s a brilliant, exciting musician, period. 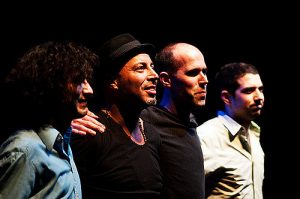 Dhafer Youssef (b. 1967) grew up in a fishing village, from a long line of muezzins (leaders of prayer in the mosque). His grandfather exposed him to religious vocal music, which he practiced in his kitchen and refined in the cavernous hammam of the village. The resonances produced by his voice were his favorite toy.

He began singing with a local liturgical singing troupe, learned oud and then moved on to electric bass, playing at weddings and singing music from the radio in the traditional liturgical style. (Remind anyone of Ray Charles?) From the music conservatory in Tunis, he moved on to Paris and Vienna, where he’s been based since.

He recorded his first album in 1996, and since then has moved from project to project, each one exploring new territories, new sonorities, including the juxtaposition of the oud and northern European electronic-jazz textures.

From 2009-2012, his quartet was composed of Armenian pianist Tigran Hamasyan, Canadian bassist Chris Jennings and American drummer of everyone’s choice Mark Guiliana. Inspired by texts from the seventh century Persian poet known for his odes to wine, Abu Nawas, the collaboration produced a number of high-quality filmed performances, as well as the album “Abu Nawas Rhapsody” (2010). 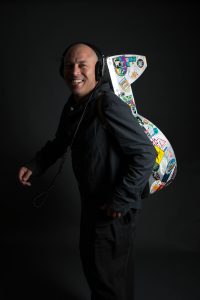 His latest project is fascinating in itself. “Birds Requiem” takes a more Western, exploratory look at the Eastern materials. It employs an Estonian pianist, an incredible Turkish clarinetist, a British bassist, an Indonesian-Dutch drummer, a Norwegian rock-oriented guitarist, and a knockout virtuoso Turkish kanunist. Tigran’s latest, by the way, is “Luys i Luso”, an exploration of Armenian sacred music from the 5th through the 20th centuries, arranged for piano and chorus.

Both artists are well worth following in every project they do. But when they joined together, they reached a pinnacle, higher than Tunis’ Atlas Mountains, higher than Armenia’s Mt. Ararat (yes, the one where Noah got stuck), certainly higher than Mont Blanc. I urge you to take the time and have the patience to expose yourself to this quartet’s music at leisure. They make great, great music. I don’t give out 100’s lightly.

They can be just purely entertaining, providing unadulteratedly pleasurable, accessible-without-borders music. Like you can enjoy The Four Tops.
They can be emotionally wrenching, especially Dhafer’s vocal flights into nasal, hyper-falsetto stratospheres. Like Janis Joplin at her rawest, purest, most expressive.
They can be mindbogglingly, jawdroppingly dexterous, especially when Tigran gets that Keith Moon look in his eye and starts taking you places on the keyboard that no one’s ever been before. 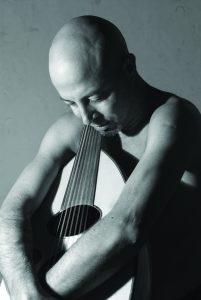 Take for example ‘Les Ondes Orientales’ (‘Oriental Waves’). It begins with an oud/piano exposition, improvising on what will become the theme with utter gentleness, a warm group embrace. In the third minute it begins to accrue energy, then at about 4:20 begins to rock the theme a tempo.

At 5:30 Dhafer lays down the oud for his rubato vocal ‘solo’, backed by Tigran. The interplay between them half reminds me, surprisingly, of the legendary Bill Evans/Tony Benett duets. Nowhere else have I ever heard a pianist providing such eloquent support for a vocalist. But Dhafer ain’t singing ‘The Touch of Your Lips’. Check out the vocal climax at 8:45. Tony Benett never scaled those heights. And I’m not talking pitch.

The next section features Tigran. It is the finest piano trio music I’ve heard since Bill Evans died. Passionate, brilliant. At 12:30 Dhafer joins them to revisit the theme. It’s not George Harrison dabbling in sitar. It’s not pandering with exotica. It’s new, great music.

Dhafer: “Old meters are inspiring for me. It gives me the possibility to think the melody and bass line differently and opens doors. The most I hate in music is when it doesn’t groove. Old is really groove.”

Do yourself a favor, venture out of that old comfort zone, check out this quartet. Open your ears, I’ll betcha it’ll speak to you. Their language is universal – within you and without you.