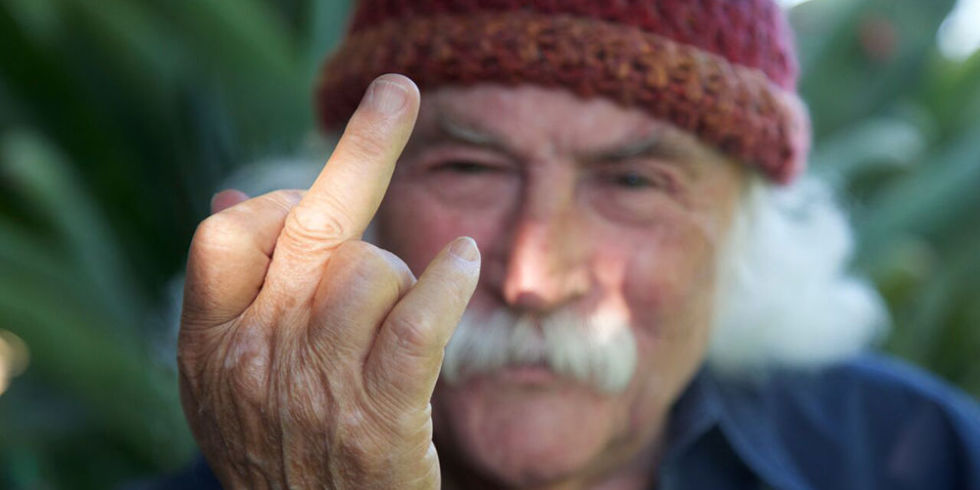 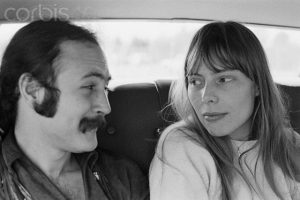 David Crosby is one elusive sonofagun.

At his best, he’s as magical as a perfect high (‘Guinnevere’, ‘Everybody’s Been Burned’).
At his worst, you want to find something high to jump off of (‘Mind Garden’).

To tell the truth, he’s not much of a songwriter. Almost all of his best music is written/performed/created in collaboration. He most frequently shines in the light reflected off a partner he’s enhancing, as happened so frequently in The Byrds (‘Eight Miles High’) and CSN. Sometimes, he’s the best harmony singer ever (CSN, SoTW 171, Jackson Browne’s ‘Something Fine’). 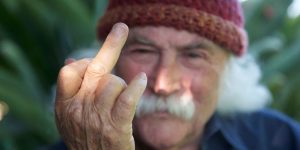 Left to his own devices, I’ve found him to be more often than not just annoying.

But when he’s on, he’s just so damned good that you keep going back for more. Then you get ‘Where’s the meat?’ frustrated, and you leave. Then you come back, looking for just a “little bit of instant bliss”.

I followed Crosby closely up through “Déjà Vu”, even that lovely contribution he made to Jefferson Starship’s first album, ‘Have You Seen the Stars Tonight?’ – co-written (no surprise) with Paul Kantner. But then I admit, I abandoned starship. I tried to keep an eye out for what he was doing, all the subsequent CSN and CSN&Y reunions, and most of the solo albums – 1971, 1989, 1993, 1995, 2014, 2016. I even read his autobiography, for which I should get extra credit.

But I just couldn’t generate the energy to really follow Crosby closely. There were always glimpses of magic, but in the morning I was left with a headache. But then you think again of that instant bliss…

The same with his buddy Stills, the same with CSN, not to mention &Y (for which I always had limited patience).

But then I recently had the urge to revisit some of Stills’ output over his latter decades, and discovered that Graham Nash had compiled box sets for each of C and S and N himself. The recent SoTW 258 on Stills was a result of checking out his 4-CD retrospective, “Carry On”. In short – if Stills were as sensible as he is talented, he would have been inside the pantheon instead of in the entry hall. Proof: SoTW 072, ‘Suite: Judy Blue Eyes’ (from “Just Roll Tape”). There’s an awful lot of shouting and carrying on in those latter decades, very little memorable music. 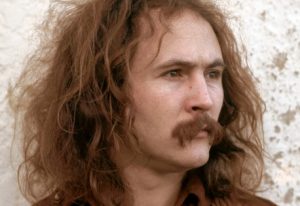 Crosby’s 3-CD retrospective, “Voyage”, is more enlightening and more satisfying. The first CD includes 3 Byrds cuts, 5 CSN/&Y, 5 from his 1971 solo album “If I Could Only Remember My Name”, 7 from early Crosby & Nash. The earlier stuff is great, the latter fine. The third CD is unreleased demos which, for me, might better have been left unreleased.

But that second CD? It’s Crosby. Maybe not at his very best, but at his very good. It’s like staring at a beautiful woman, or (they tell me) a chemically-induced hallucinogenic experience: it doesn’t mean anything, and it leaves no imprint on the memory or the soul. But it sure is lovely while it’s happening. 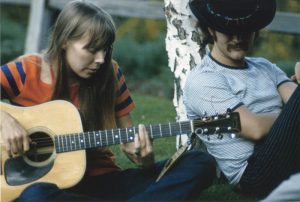 There are three songs from the 1977 album “CSN” (‘Shadow Captain’, ‘Delta’, ‘In My Dreams’) and one from the 1988 CSNY “American Dream” (‘Compass’), then one from his 1989 solo album, ‘Tracks in the Dust’ . They’re lovely, but so blatantly lacking in the inspiration that made the early material an indelible part of our brains and our hearts that we’re left a bit depressed by the contrast.

‘Arrows’, from the 1990 CSN flop “Live It Up” fares a little better. But then come two cuts from a much disparaged 1993 “A Thousand Roads”, a collections of slickly produced cuts written for him mostly by mercenaries: Jimmy Webb, Marc Cohen, John Hiatt.

‘Hero’ is co-written with Phil Collins. It’s not a great song, perhaps more Phil than Dave. But at least it’s a song. It coheres, and I enjoy it every time I hear it. (And every time I hear it, it sounds like it came from Brian Wilson’s darned good new album “No Pier Pressure”.)

But then there’s one cut that made all this rather depressing work worthwhile, our SoTW, ‘Yvette in English’, co-written with one Joni Mitchell. 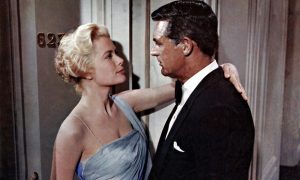 It’s a lovely, enigmatic bossa nova vignette. Like so many of Joni’s finest songs, it rings patently autobiographical – full of precise, evocative details, seeming to allude to real people, real events. I don’t know the back-story here. Joni recorded it a year after David, and the other persona in the song is a male. So my imagination draws Joni watching a French girl with short hair in a short skirt and black tights (I keep thinking Brigitte Auber from “To Catch a Thief”, but upon checking, that’s wrong; I guess Grace Kelly addled my visual memory there) sidling up to him and offering him some heavily-accented mind-altering substance.

When Joni’s songs work best, then entice you into connecting the details. That’s pleasure enough for me, but if someone out there knows The Facts, I’d be glad to hear them as well. From past experience, the real versions do not diminish the imagined ones. 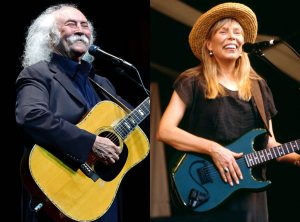 How many other songs has Joni co-written? I can think of none.
But she certainly owes Crosby. In late 1967 she was just starting to attract attention as a solo artist. Even though her success today seems inevitable, Crosby was instrumental in jump-starting her career.

He ‘discovered’ her in Florida in 1967. They hooked up, he took her back to LA, got her a manager Elliot (Rabinowitz) Roberts and a record deal (including artistic control, a rarity for a rookie), produced her first album, and brought in his buddy to play bass, the recently unemployed (Buffalo Springfield) Steve Stills. The rest is history. Well, the rest for the 3-4 few years, anyway. After that we have 50 years of non-history.

So in 1993, with Crosby floundering in drugs and jail and sundry shit, Joni did him a solid, wrote him a song/poured a bucket of cold water on him to get him to co-write a song for his covers album. She recorded ‘Yvette in English’ a year later, on “Turbulent Indigo” – not one of her standouts, produced by Larry Klein shortly after their divorce. Still, it’s got soprano sax from Wayne Shorter.

Postscript With a Twist Ending 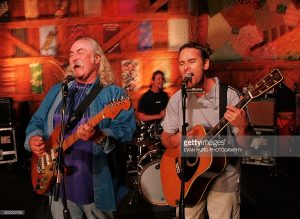 Then Crosby got a new liver and a new son-bandmate. James Raymond, a young musician Crosby had fathered but didn’t know (as Joni wrote about her abandoned daughter, “my child’s a stranger/I bore her/But, I could not raise her”). They formed a band, CPR, which did little to resuscitate his career (sorry, couldn’t resist), but I’m sure gave him a lot of paternal pride. “Voyage” contains 5 songs by CPR—they’re mostly lovely, all forgettable.

Crosby’s had somewhat of a comeback recently. In 2015, Michael League, leader of Snarky Puppy, just about the hippest act in music these days, invited him to perform a song with them, ‘Somebody Home’. It may not be ‘Triad’, but it’s pretty darned affective. League then gave Crosby a butt-kick, inviting him to record together “Lighthouse”, a quickie album (Crosby was used to belaboring recordings to death), including 5 co-written songs.

“Lighthouse” won’t get Crosby inducted into the Rock and Roll Hall of Fame, as he was twice (as a Byrd and as C. But like so much of his corpus, it’s limpidly perfect one moment, annoying as stepping in dog-do the next.

Well, he’s still alive, happy, making music. That’s a pretty remarkable feat in and of itself. And if we look hard enough, we can still find some gems like ‘Yvette in English’ to remind us of just how pure a talent he was and, in his own unique 75-year old way, still is.

[Surprise, surprise. In 2018, Crosby released another League/Stevens-inspired album, “Here If You Listen”. It’s stunning, as good as his best. I promise you a posting about it soon. JM]

He met her in a French café, she slipped in sideways like a cat
Sidelong glances, what a wary little stray, she sticks in his mind like that
Saying, “Avez-vous une allumette?” with her lips wrapped around a cigarette
Yvette in English saying, “Please have this little bit of instant bliss”

He’s fumbling with her foreign tongue, reaching for words and drawing blanks
A loudmouth is stricken deaf and dumb in a bistro on the left bank
“If I were a painter, “Picasso said, “I’d paint this girl from toe to head”
Yvette in English saying “Please have this little bit of instant bliss”

Burgundy nocturne tips and spills, they trot along nicely in the spreading stain
New chills, new thrills for the old uphill battle. How did he wind up here again?
Walking and talking, touched and scared, uninsulated wires left bare
Yvette in English saying, “Please have this little bit of instant bliss”

What blew her like a leaf his way? Up in the air and down to Earth
First she flusters, then she frays, so quick to question her own worth
Her cigarette burns her fingertips, as it falls like fireworks she curses it
Then sweetly in English she says, “Please have this little bit of instant bliss”

He sees her turn and walk away skittering like a cat on stone,
Her high heels clicking, what a wary little stray.
She leaves him by the Seine alone with the black water and the amber lights.
And the bony bridge between left and right.
Yvette in English saying, “Please have this little bit of instant bliss”