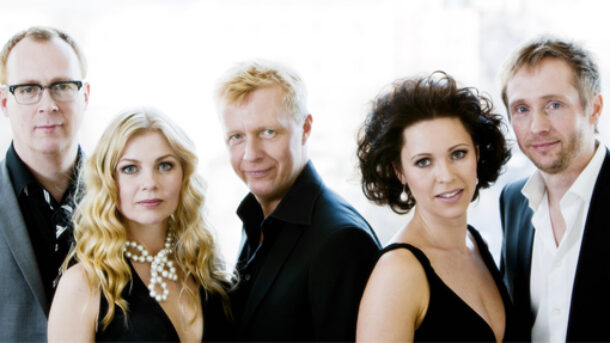 Joy Spring, Walking Down the Street, There Will Never Be Another You 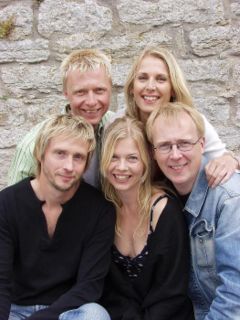 A proud, card-carrying, dues-paying proselyte, full of missionary zeal, collaring unsuspecting wedding guests, subjecting them to my fanatic preaching of The Word. Or, in this case, The Music.

A cappella (unaccompanied vocal) jazz has been pretty much the fulcrum of my thoughts for the past three or four years. Now, that may sound pretty silly to you. That’s because a cappella jazz most commonly connotes rosy-cheeked college kids tooting away at geeky renditions of hackneyed pop hits. But that’s because our musical vocabulary is too often narrowly American. With all due credit to the good old Stars and Stripes, there are other scenes out there, and this is one genre where the action is elsewhere. And I’ve had the good fortune to be exposed to the vocal jazz scene in Scandinavia, and the myriad of wonderful groups making amazing music there.

So it is my distinct honor to introduce you to The Real Group, the acknowledged masters of a 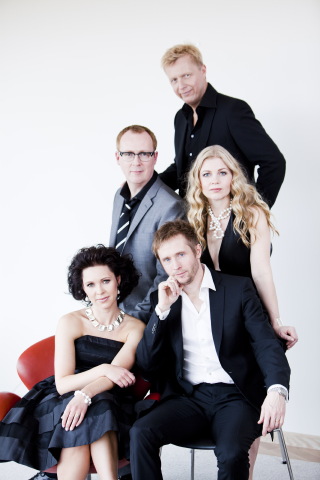 cappella jazz. TRG is a Swedish quintet, working together for 25 years with only two (recent) changes in personnel. They met in music school in Stockholm, and were inspired by Bobby McFerrin’s then-new release, ‘The Voice’, a groundbreaking experiment, an entire solo a cappella album. What one remarkable voice can do.

TRG convinced their school to allow them to pursue a custom-made program, two years of working together, forging a unit of precision and quality that is unmatched anywhere. If Mr McFerrin’s album is a virtuoso showcase, TRG’s music is the Rolls Royce of vocal ensembles. They’re singers’ singers. I know–I’ve sung their music, and that’s the only way to really get to know it inside out. They record and perform without any kind of embellishment. They write their own arrangements. It’s mind-bogglingly intricate, sophisticated, exacting, fine and fun.

They’re a contrabass, baritone, counter-tenor, alto and soprano. When the soprano (the contrabass’s ex-wife) left them a couple of years ago, the alto switched to soprano (I still can’t figure out how that’s possible) and they brought in a young former studio singer. They’re family people, and they made a decision long ago not to travel for more than a week at a time, and that only a few times a year. So that precludes making any kind of a serious impact in the US. They’re pretty well known in Scandinavia, and for some bizarre reason they’re superstars in South Korea, which suffices them commercially.

Beyond that, they pursue their musical and personal interests, and take very seriously their role as acknowledged leaders of this cult—maintaining a very fine academy website about their many pedagogical activities, organizing festivals, and exploring new venues such as on-line workshops. I like to think that I can call them my friends, and I can attest that they’re fine, warm human beings. 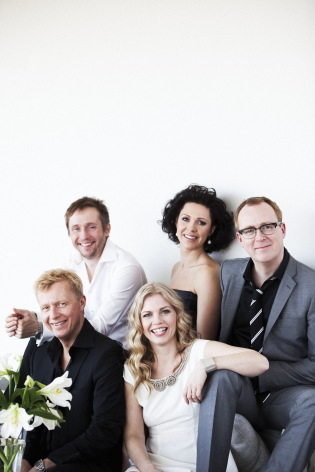 Their material does not always match their technical abilities. Their albums contain a lot of pale original compositions and traditionally-based material in Swedish that I find difficult to fully grasp or appreciate, although their new CD (“The Real Album”, all-original) is pretty darn fine. But throughout their recording career there are gems, no fewer than in the Czarina’s private dressing table. The music can and should be purchased at their very rich website.

Their best material is mostly jazz standards – ‘Misty‘, ‘As Time GoesBy’, ‘Good Bait’, ‘My Romance’, ‘Night and Day’, ‘There Will Never Be Another You‘, a stunning ‘Waltz for Debby‘ . Here’s Duke Ellington’s ‘It Don’t Mean a Thing‘, and Count Basie’s ‘Splanky‘ and ‘Li’l Darling‘.

Here are a couple of their originals from a terrific video (2001, Korea): ‘Acappella in Acapulco‘, ‘I Sing, You Sing‘. Here’s a whole different kind of work, ‘Gota‘, a recent potpourri of modern pop in a traditional Swedish idiom. It may take some getting used to, but I assure you it’s worth the effort. And I don’t know who wrote ‘Walking Down the Street‘, but it’s perhaps their ultimate showpiece.

And here’s perhaps my favorite clip of theirs, from the same video—a medley of 5 songs from the Count Basie big band, 4 of which are written by Neil Hefti for the ‘Atomic Basie’ album, including the great ‘Li’l Darling’ (here by TRG, here by Basie) and ‘Flight of the Foobirds’.

What are we going to offer you as our SoTW? Well, it’s a particularly hard choice for me, but let’s go with Clifford Brown’s 1954 jazz classic, ‘Joy Spring’, which has had oodles of renditions, none better than that of The Real Group. The lyrics were written by Jon Hendricks (one of the greatest jazz vocalists ever) for Manhattan Transfer. I don’t mean to dis the Transfer, but their version can’t stand in the same room with that of The Real Group, of whom Hendricks said, “I wish I was in this group.”

I’m assuming that this music is new for most of you out there, and I really hope you like it, because it’s been giving me great pleasure for a number of years now. And there’s a lot more Nordic vocal jazz up there, a sampling of which I hope to be bringing you in the not too distant future. There’s a wide variety of really great music in this too-little known vocal jazz scene, but The Real Group really are in a league of their own.