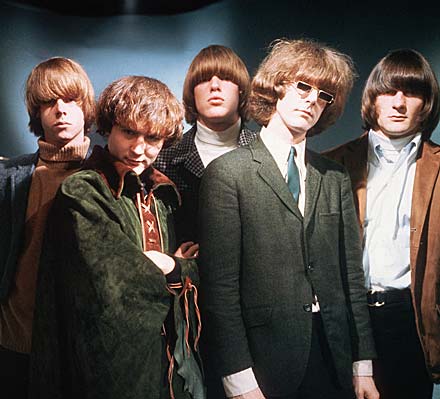 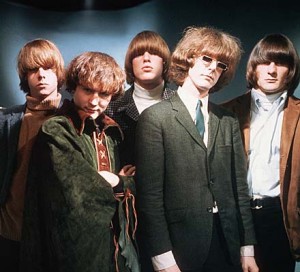 You can’t overstate the importance or achievement of the early Byrds (not the Miami Beach diners, the LA band). Going way out on a limb (Byrds can do that), there are strong arguments that they:

To no small degree, it was their version of ‘Mr Tambourine Man’ that shattered the Rock/Folk dichotomy. Prior to it—never the twain shall meet. After it—the floodgates opened. Folk-rock marked the crazed coupling of Beatle hormones intertwined with Dylan gravitas. 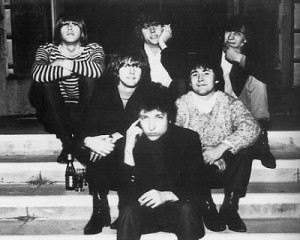 The Byrds and Dylan

Dylan’s “Another Side of” (August 1964) reached #43. “Bringing It All Back Home” (March 1965) reached #6. It’s hard to grasp today that the album did that well despite the fact that it had virtually no air play. Album-oriented rock FM radio did not come into being until the end of the decade. Until then, it was all about the Top 40. The new music had nowhere to be heard – that’s why they called it ‘underground radio’ in its nascent period. ‘Subterranean Homesick Blues’, Dylan’s first single to chart, only made it to #39. 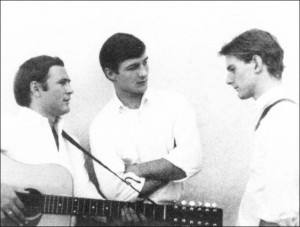 So circa 1965, the folk scene was just beginning to lose steam. Dylan was booed at Newport. The Beatles were at the apex of their initial mania period (“Help” July 1965), the British invasion had captured AM radio.

Columbia signed them, and their management got them a tape of a new, unreleased Dylan song. But by the time their first studio session was scheduled, they hadn’t yet mastered their instruments, so The Wrecking Crew was brought in to lay down the instrumentals together with McGuinn, who did do the vocals together with Clark and Crosby. 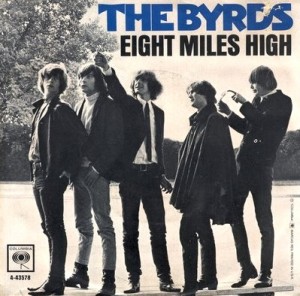 Their first two albums hit #6 and #17 respectively, spurred by their two #1 hits and a series of lesser hits (especially ‘All I Really Want to Do’). Columbia and the American public, eager for a homegrown group to rival all those Brits, made them into teen idols (see ‘So You Want to be a Rock and Roll Star’). McGuinn’s square specs, Crosby’s outlandish capes and hats, and their general stoned aloof demeanor, cultivated their pop star status.

Many maintain that the crowds gathered at Ciro’s in LA to see the Byrds perform “represented the first stirrings of the West Coast hippie counterculture”.

I have less enthusiasm for The Byrds’ first two albums than most rock critics. I find the material (Dylan and other folk covers, as well as a smattering of Clark-penned originals) pretty bland, to tell the truth. Columbia promoted ‘Another Side of’ with the slogan “Nobody sings Dylan like Dylan”, but the public was unconvinced. They weren’t ready for that voice unless it was sugar-coated by PP&M, Joanie B, then The Byrds. 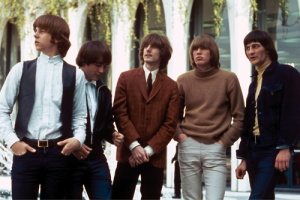 Me? I was 17. I struggled with Dylan. I understood that something was happening there, but I didn’t know (exactly) what it was. But I certainly didn’t need the watered-down versions to explain it. You tell me, would you have listened to Dylan’s ‘All I Really Want to Do’ or The Byrd’s?

Still, they were a force. They could indeed make some fine Amirkin Beatlish music, like ‘Feel a Whole Lot Better’, and yeah, the vocals were pretty darned cool.

In November they toured the US, listening to their new discoveries, John Coltrane (“Impressions” and “Afro Blue Impressions”) and Ravi Shankar. Coltrane was pioneering his ‘sheets of sound’, wild high-speed arpeggios of fluid, ‘vertical’ music. Listen to Coltrane’s ‘India’, the first cut from “Impressions”. The influence couldn’t be clearer. 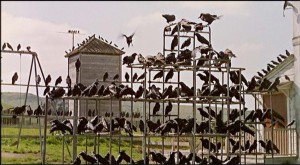 Ravi Shankar was soon to become the darling of the hippies, the mentor for George Harrison’s sitar experiments, star of Woodstock, the guru of the East. A decade later he would later father Norah Jones, no small contribution to the world in itself.

In August 1965, The Byrds migrated to England, the first American group to cheep back at the music the Beatles were making. The tour was hyper-hyped; the press panned them, and despite the warm personal welcome they received from The Beatles and The Stones, they were 21-year olds stoned out of their minds, overwhelmed by the noise and the adulation.

Returning to the US from after England, they experienced an epiphanous flight, seven miles high –a pun on the drugs. McGuinn: “The Beatles had a song called Eight Days a Week, so we changed it to Eight Miles High because we thought that would be cooler.” 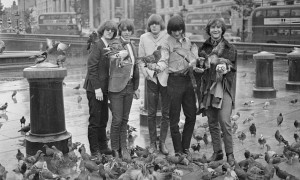 The Byrds and The Birds

In November, somehow the song “Eight Miles High” was composed, credited to Clark/McGuinn/Crosby. Gene Clark said it was almost entirely his composition. McGuinn says the song was mostly his and Crosby’s. Crosby said, “I thought it was Gene’s idea to write a song about our trip to London – he was a wonderful, talented man. But if Roger says it was his idea, maybe it was.” But the Byrds couldn’t get those Coltrane and Shankar sounds out of their ears, and the arrangement seems to have been a group effort.

On December 22, 1965, The Byrds snuck down the street to the RCA studio where their friends Jefferson Airplane had been working to record ‘Eight Miles High’.  They wanted to release it, but the Columbia suits insisted on a recording done in their studio. Both McGuinn and Crosby have expressed their preference for the original recording. Crosby: “It was a stunner, it was better, it was stronger. It had more flow to it. It was the way we wanted it to be.”

It was released in March, 1966, long (3’33”) and weird. Six weeks later, an industry report alleged that it was a drug song, resulting in a ban from airplay on many AM stations. Still, it reached #14 on the Billboard chart, The Byrds’ first great song, their last Top 20 hit. 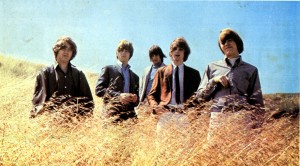 It is widely credited with being the first psychedelic rock song, catalyzing a mindset and soundtrack that would accompany us through Woodstock, Altamont, and the Vietnam debacle. If you want some perspective on just how innovative the song was, it was preceded by ‘We Can Work It Out’, ‘Daytripper’ and ‘Nowhere Man’, and followed by ‘Paperback Writer’ and ‘Rain’ (the Beatles’ first ‘other’ song). The Byrds beat them to the punch. A British music magazine stated at the time that “Paul [McCartney] admitted recently that the Liverpool foursome are working on a similar sound for their new album and single.”

‘Eight Miles High’ is not only a groundbreaking song. It is also a great song. The lyrics are indeed haunting, psychedelia at its very finest. The melody is a riveting amalgam of traditional folk chord progressions with Eastern drone. The vocals—well, David Crosby is the finest harmony singer in rock, McGuinn and Clark no slouches – are a shimmering sheen of peach-cheeked choirboys (who have just snuck behind the altar to drop acid). The angelic, mellifluous harmonies contrast with the raucous, grating instrumental track. (here’s the Columbia instrumental track isolated). Hillman’s thrusting bass launches the flight. For my money, he’s in the absolute top echelon of rock bassists. Clarke propels it to liftoff (hey, he was listening to Elvin Jones). I still remember how he knocked me out in concert (and I had seen all the biggies). Crosby’s jagged, punching, ballsy rhythm guitar (inspired by McCoy Tyner’s rhythm piano?) provides the off-the-beat edginess. And of course McGuinn’s Rickenbacker, heavily compressed to produce a bright and sustained wall of overtones. Oh, how he jangles.

The juxtaposition of the grave, melodious vocals; the muscular, brilliant high-octane rhythm section; and the feverish, hallucinatory lead guitar–unlike anything heard before – together comprise one of rock’s masterpieces. 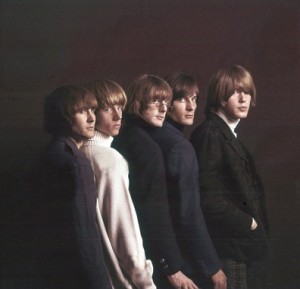 Time has dealt kindly with ‘Eight Miles High’. It’s been elected to the Grammy Hall of Fame, and is #151 on Rolling Stone’s list of The 500 Greatest Songs of All Time. There are oodles of articles about the song; and a flock of cover versions, including ones by various Phoenix-like reincarnations of previous Byrds, and solo efforts by both McGuinn and Crosby. Most are pretty embarrassing, the worst being by McGuinn and Gene Clark where they sing in unison! Out of all those harmonic options, unison?

I’ve always found McGuinn an annoying persona, despite his talent, and have refrained from following his music over the years. I did listen to a sampling now, with my reservations justified. But I did come across one acoustic version of his from 2006 which really knocked me out. He was (is) indeed an exceptional guitarist. Especially interesting for me is how prominent the folk roots of the song are in this treatment.

Immediately following the release of the single, Gene Clark left the band. They went on to record around it a mixed but fine album, “Fifth Dimension”, and then their masterpieces “Younger Than Yesterday” and “The Notorious Byrd Brothers” before Crosby left the band, McGuinn changed his name, and dressed the Byrds in a different feather.

But the early version of his band, even before they reached the zenith of their flight, (at the risk of hyperbole) invented folk-rock, invented psychedelic rock, and introduced both Eastern and avant garde jazz to mainstream rock. No small feats, those. The early Byrds indeed got the worm.