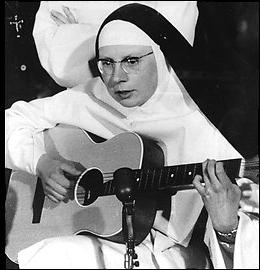 As soon as someone says “the music of the Sixties”, I tune out. They’ve already proven they don’t know what they’re talking about. No matter how you slice it, there’s pre-The Singing Nun ’60s and there’s post-Singing Nun ’60s.

It’s tempting to nostalgize the last year in the reign of rock & roll as the fertile manure from which the British Invasion sprouted.

This is the music I suckled. There were 8760 hours in 1963. Figure I spent half of them sleeping, another 10% eating chocolate bars – that still leaves over 4000 hours I spent listening to AM radio that year. I figure any song that hit #1 was on the charts for at least 8 weeks? Do the math: that means I’ve listened to every one of these songs at least 3.57 bezillion times. 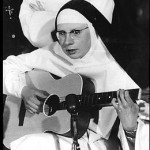 We like to remember the good times – UC coming within a tip of three straight NCAA championships, Shelley Fabares’ sweater on the Donna Reed Show. We conveniently forget the acne and the agony.

That musically pre-pubescent decade from ‘Shake, Rattle and Roll’ (May, 1954) to ‘I Want to Hold Your Hand’ (February, 1964) was about as fluctuous as the lights on the jukebox playing the 45s, or the moods of the gum-chewing bobby-soxers that were buying the 45s. Let’s don our white lab coats and take an unflinching, rigorous look at the corpus in its entirety, the top of the Top 40 heap, the 21 #1 Billboard Hits for the calendar year of 1963. What was AM radio feeding us? In chronological order: 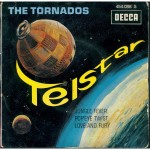 ‘Telstar’, The Tornados – The former backing band of Billy Fury, the only British group to hit #1 in the US before Les Beatles. Producer/writer Joe Meek capitalized on imaginary Sputnikish sounds (remember the Space Race, Virginia?). Four years later, on the anniversary of Buddy Holly’s death, Meek shot himself in his studio. Just goes to show you.

‘Go Away Little Girl’, Steve Lawrence (Sidney Liebowitz) – Gerry Goffin/Carole King’s fourth #1. We love to remember ‘Will You Still Love Me’ and ‘Up on the Roof’, romanticize ‘The Loco-Motion’ and ‘Take Good Care of My Baby’. But this one we hide in the closet of our memories. Blame it on the bossa nova. That same week, ‘Pepino the Italian Mouse’ was #5 on the charts.

‘Walk Right In’, The Rooftop Singers – Riding on the coattails of the folk music fad, Erik Darling  (Pete Seeger’s replacement in The Weavers) formed a group, remade a 1930 song by Gus Cannon, who was living in a shed, having hocked his banjo for coal. Gus got the royalties, we got the shlock. Do yourselves a favor, go run to watch Chrisopher Guest’s “A Mighty Wind”. ‘Hey Paula’, Paul and Paula (Ray Hildebrand and Jill Jackson) – Ray was on basketball scholarship at Payne College in Brownwood, Texas, but he dabbled in songwriting. He dabbled this one, inspired by Annette Funicello, recorded by the producer of Bruce Chanel’s ‘Hey, Baby’ in two takes. Then Ray found God. I hardly know what to say. I must have heard this song 3 million times. I’m still asking God why.

‘Walk Like a Man’, The 4 Seasons – Their third consecutive #1 hit, following ‘Sherry’ and ‘Big Girls Don’t Cry’. Frankie Valli and his Jersey Boys were so popular that The Beatles were called “Britains’ Answer to The 4 Seasons”. Can you imagine? 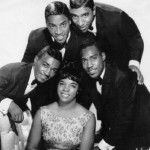 Ruby and the Romantics

‘Our Day Will Come’, Ruby and the Romantics – Somehow this unknown black group (formerly known as The Supremes, not to be confused with either the judges or the Diana Ross gang) finagled the song out of the hands of Jack Jones. How it got from there to Amy Winehouse is anyone’s guess.

‘He’s So Fine’, The Chiffons – George Harrison was found by a judge to have subconsciously copied the song in ‘My Sweet Lord’. GH: “I still don’t understand how the courts aren’t filled with similar cases –as 99% of the popular music that can be heard is reminiscent of something or other.” He tried to give away the rights to the song, just to get past the aggravation, but never succeeded. Perhaps he should have given it to Ray Hildebrand. Doo lang doo lang doo lang. The Chiffons later recorded Goffin-King’s ‘One Fine Day’. 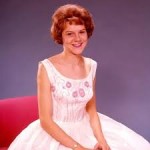 ‘I Will Follow Him’, Little Peggy March – Margaret Battavio of Lansdale, Pennsylvania was 15 years, one month and 13 days old when this hit #1, youngest chick ever. At 4’10” she may have also been the shortest. The song was originally an instrumental written by Paul Mauriat, then a hit in France for Petula (‘Downtown’) Clark, under the name Chariot.

‘If You Wanna Be Happy’, Jimmy Soul – Harlem-born, Trinidad-inspired, one-hit wonder. “If you want to be happy for the rest of your life/Never make a pretty woman your wife/So for my personal point of view/Get an ugly girl to marry you.” Oh, Bella Abzug. 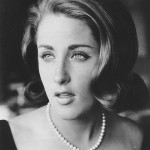 ‘It’s My Party’, Lesley Gore – Lesley Sue Goldstein’s father owned Peter Pan, a children’s swimwear and underwear firm. Lesley Sue was 17 when Quincy Jones produced and Phil Ramone recorded the demo, which was rushed to release before The Crystals could get their hands on it. Lesley had a string of hits, including the protofeminist ‘You Don’t Own Me’ and became a leading LGBT figure. It was always her party. (Amy also covered this—produced by the selfsame Quincy Jones!) 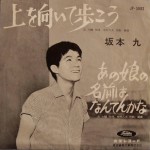 ‘Sukiyaki’, Kyu Sakamoto – ‘Ue O Muite Aruko’ means “I look up when I walk” in Japanese. Sukiyaki means a kind of beef stew. It sold 13 million copies (including one to me). What were you thinking, Jeff?

‘Easier Said Than Done’, The Essex – Written and recorded by three Marines, inspired by the beat of a room full of teletype machines. The original take was done in the last few minutes of a session, and was so short parts had to be spliced together. A great song, infamously covered by The Beauty and The Beast. ‘Surf City’, Jan and Dean – They had had several novelty hits – ‘Baby Talk’, and standards ‘Heart and Soul’ and ‘Linda’ (written in 1944 for infant Linda Eastman) retooled into white doo-wop. Then they met The Beach Boys. Jan finished Brian Wilson’s half-written ‘Surf City’, and continued with faux-surfing hits such as ‘The Little Old Lady from Pasadena’. They were so popular that they were invited to host the legendary “The T.A.M.I. Show” (a must, if you don’t know it.) Their macabre teen tale ‘Dead Man’s Curve’ turned out not so funny when Jan totaled his car on Sunset Strip and suffered brain damage, with years of rehab. ‘So Much in Love’, The Thymes – Many a feel was copped in the back seat of a 1956 Ford convertible to the sound of this Philly quintet, who presaged black soul versions of MOR standards.

‘Fingertips (Pt II)’, Little Stevie Wonder – A miracle of a song by a 12-year old genius. Read all about it in its very own SoTW. Thanks Steveland, for ensuring that our youth wasn’t a total embarrassment.

‘My Boyfriend’s Back’, The Angels – The first white girl group to achieve #1. Preceded by the kvetching ‘Til’ and ‘Cry Baby Cry’ (not The Beatles’). Producer/writers Feldman/Goldstein/Gottehrer hit the top again with the McCoys’ ‘Hang On, Sloopy’.  Bet you didn’t know that. 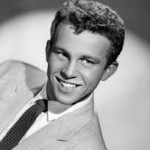 ‘Blue Velvet’, Bobby Vinton – With #1 ‘Roses are Red’ and #3 ‘Blue on Blue’ (one of Bacharach/David’s first hits) under his belt, pop crooner Bobby took the surprising step of  traveling to Nashville to record an album of all ‘blue’ songs. During the session (with Floyd Cramer, Boots Randolph, Grady Martin and Charlie McCoy!), someone mentioned this 1951 Tony Bennet hit. A secretary (that’s what they used to call personal assistants) was sent down the street with a dollar (that’s what they used to call money) to buy the sheet music for what was intended to be album filler.

‘Sugar Shack’, Jimmy Gilmer and the Fireballs – I loved this song. Why, God, why? JG&tF’s claim to shame? Members of the Norman Petty stable, he employed them to defile some of the recently deceased Buddy Holly’s most divine, pure acoustic demos by overdubbing electric guitars and drums. Think of drawing a moustache on the Mona Lisa. The original.  The souped-up version. 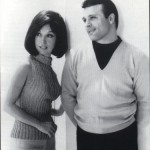 ‘Deep Purple’, Nino Tempo and April Stevens – a 1933 hit recorded here by Ahmet Ertegun, two takes in 14 minutes. Nino sang with Benny Goodman at the age of 7. His sister April was a serious singer with a serious figure, but it was her jokey ‘Teach Me Tiger’ that the astronauts aboard the Challenger shuttle requested as a wake-up tune.

‘I’m Leaving It Up to You’, Dale and Grace – just good friends, from Cajun country Louisiana. How this song got so popular is anybody’s guess. I’m as clueless today as I was 53 years ago. Dale and Grace were touring with Dick Clark’s Caravan of stars in Dallas the week their song topped the charts. Together with Bobby Rydell, Jimmy Clanton and Brian Hyland (that’s one heck of a lot of Brilliantine) they cheered the president’s motorcade as it drove by. Three blocks later, everything changed.

And the final #1 hit of 1963? Poetic justice strikes, the ultimate embarrassment: 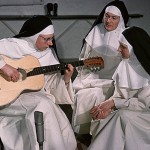 ‘Dominique’, The Singing Nun – the girls studying at the Fichermont Monastery in Brussels liked Sister Luc-Gabrielle’s singing and guitaring so much that the convent went to Philips Records to print a couple of hundred copies as Christmas presents. The single and the album hit #1 simultaneously, first time ever. Sweet, huh? But there was another “60s” lurking just beyond the horizon.

Soon after the Debby Reynolds’ 1966 bio-flick, The Singing Nun rebecame Jeanine Deckers, recording songs like ‘Glory Be to God for the Golden Pill’, a paean to Le Pill itself. She co-habited with a special, close friend of the female persuasion, got hit with a bill for $80k in back taxes on the song by the Belgian government (although she’d donated the proceeds to the convent), tried a revival (here’s the 1982 disco version of ‘Dominique’, inexplicably a flop). Fed up with both government and Church, Jeanine and her friend committed suicide together in 1985.

I was telling a friend a story from this period, and I confessed to him that I’d been telling it for 53 years now, and I really wasn’t sure where fact ended and where embellishment began. That’s okay. You gotta embrace your memory as a work in progress. We may not always find the car keys so fast, but we can also choose to delete from our collective memories  Allan Sherman’s ‘Hello Mudduh, Hello Fadduh’, Al (‘Johnny Fontane’ from “The Godfather”) Martino’s ‘I Love You Because’, Trini Lopez’ ‘If I Had a Hammer’ (sorry, I will not provide a link to that, even I have principles), Edie Gorme’s ‘Blame It On the Bossa Nova’ (saved from hell by the memorable West Wing scene), Herb Alpert’s ‘The Lonely Bull’ (the video helps illustrate just how imbecilic this music was), and Paul Peterson’s ‘My Dad’. The moral of this story, Virginia? If you can make it through January, 1964 (4 straight weeks of another Bobby Vinton croonery, ‘There, I’ve Said It Again’), you reach February, and The Beatles. And nothing, thank goodness, would ever be the same.