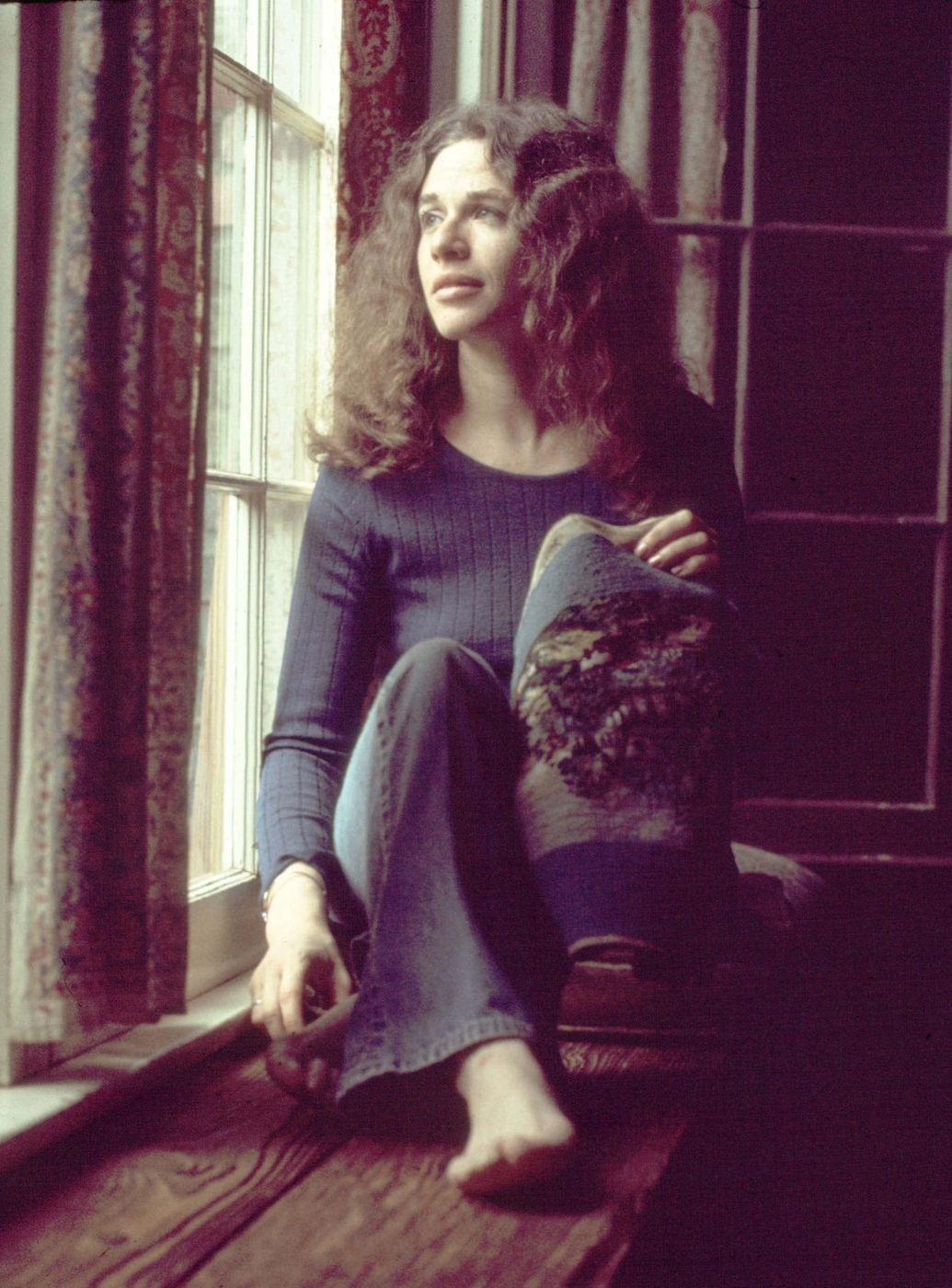 Today we’re going to tell a tale about the coming of age of a song and of its composer, their passage into (Wo)manhood, their bat mitzvahs. The song was only six years old when it started out on its unique path, and the whole process took a few years. But as music was the soundtrack of our lives, the song’s transformation reflected, colored, perhaps even nudged us along the path from adolescence to maturity (well, at least to majority–we’re still working on the grownup part). 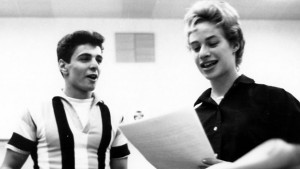 The story of how Jewish kids ground out hits for black artists in the Brill Building in the early 1960s is fascinating in and of itself. We’ve written about Doc Pomus, Leiber and Stoller, Bacharach and David, Phil Spector, and of course Gerry Goffin and Carole King, but the list also includes luminaries such as Neil Sedaka, Neil Diamond, Greenwich and Barry, Mann and Weil, MOTs all.

Of all the songs Gerry Goffin penned lyrics to, his favorite was ‘Up On the Roof’ – an AM version of West Side Story (‘Tonight’ on the fire escape, exactly one year earlier – add a bass, a drum and a vibraphone, and they’re twins), an urban vision of transcendence that you could hear on your transistor and dance to at the sock hop. When Mrs Goffin (Carole King) wrote the melody, she was twenty years old, in the eighth month of pregnancy with the couple’s second child. It was recorded by The Drifters (with Rudy Lewis singing lead) in late 1962, and hit #5 on the charts. 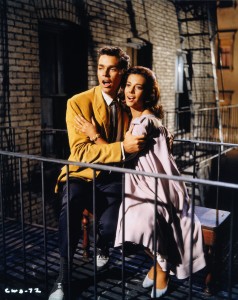 So Carole is this 20-year old kid knocking out babies and AM hits one after the other, both in collaboration with Gerry Goffin.  In the Brill Building office she literally would play the piano with one hand while holding a baby in the other. The songs (up to 1967) – ‘Will You Still Love Me Tomorrow’, ‘The Loco-Motion’, ‘Take Good Care of My Baby’, ‘Go Away Little Girl’ (all #1 hits!) – great as they were in their own terms, were commercial pap. Even ‘Up On the Roof’ was a fairytale, as gritty and realistic as West Side Story itself, a sanitized and romanticized version of the New York streets. 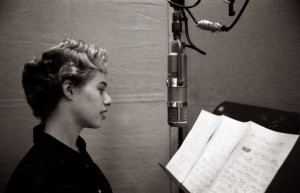 Here’s the demo Carole cut for The Drifters, with Gerry introducing the song. And here’s an early video of the Drifters singing ‘Up On the Roof’ up on the roof.

If Gerry Goffin ever went up on the roof of the Brill Building, it wasn’t to excape all that rat race noise down in the street. (For that he drove out to his lovely tract ranch house in West Orange, New Jersey). If Gerry went up on the roof, it was to fool around with the Cookies’ (‘Chains’) singer Jeanie McRea, for whom he and Mrs Goffin wrote ‘I’m Into Something Good’ (although it seems that Gerry was the one who was into something good), in return for which Jeanie gave Gerry a baby girl.

Carole knew about the baby, but reconciled herself to it like a good, obedient housewife. The problem was Gerry getting hallucogenicied and violent and utterly detached from West Orange reality. 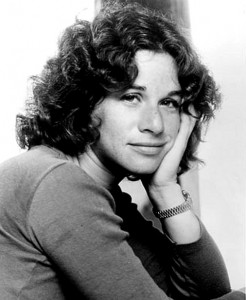 Carole started hanging out with a young band she and Gerry had signed, the Myddle Class, which included drummer Joel O’Brien, guitarist Danny Kortchmar, and bassist Charlie Larkey (b. 1947!). Carole was thrilled when the kids asked her to sit in on keyboards, and soon began a relationship with Larkey. The Myddle Class flopped in the Village clubs they played (outclassed by Al Kooper’s Blues Project, not to mention Sebastian’s Lovin’ Spoonful—the first American rock groups), as did their group The Flying Machine (led by Danny’s best friend, James Taylor).

Even as the fairytale world of West Orange was crumbling, Carole and the in-and-out-of-hospital Gerry kept stoking the star-making machinery behind the popular song, culminating in the harbinger of the times that were a-changing, ‘(You Make Me Feel Like a) Natural Woman’ for Aretha. 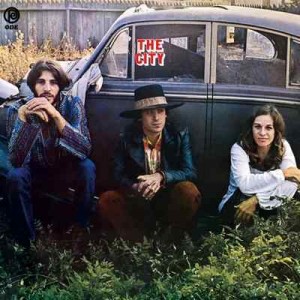 But the center could not hold. Carole felt threatened by Goffin and split for The Coast, Laurel Canyon, home of the burgeoning LA music scene. Her neighbors included The Byrds, The Mamas and The Papas, young Jackson Browne and many other future stars. As a single mother (long before it existed as a status) and legendary songwriter, she was the Earth Mother of the scene.

In late 1968 Carole formed a band in LA with Larkey and Kootch, The City. The album (“Now That Everything’s Been Said”) was a respectable effort, but flopped. It included ‘Wasn’t Born to Follow’, later a hit for The Byrds via Easy Rider.

At the same time, James Taylor was in London, recording his own flop, his first album (an unrecognized masterpiece, one of my Desert Island picks) for The Beatles’ Apple label. 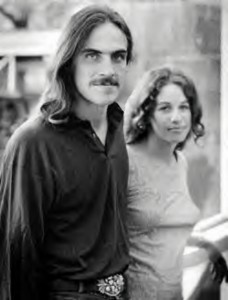 Back in LA in December 1969, James recorded the album that more than any other defined the new acoustic rock sound (and much of the pained, introspective zeitgeist) of the singer-songwriter era, “Sweet Baby James”, with Kootch on guitar and Carole on piano.

In March-April 1970, Carole cut her first solo album, “Writer”, with Larkey, Kootch, and with James on acoustic guitar and backing vocals. Goffin had been hanging around, to no avail romantically, but co-wrote and mixed the album. Who am I to judge? The new material included ‘Going Back’, another hit for The Byrds. For the closing cut on the album, Carole chose an ‘oldie’, ‘Up On the Roof’.

The song’s inclusion is sort of the point of this whole ramble. It wasn’t a gimmick to capitalize on her cred as ‘the gal who wrote’. It was a bold gesture: “That previous incarnation? That also was me.” I’ve known a lot of people who’ve shed identities, designed for themselves new ones. I myself did it in a major way, right back in the days we’re visiting here. I suppose in one way or another, most people change personae over the years to one degree or another. I’m no psychologist, but I’m guessing it’s always healthier if one can incorporate his former selves into the life he’s living. We all know people who ignore/hide/deny former incarnations. It’s inherently embarrassing. 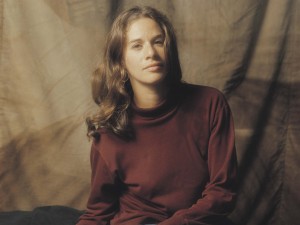 Carole, with her unique biography straddling two coasts, two eras, two realities, embraced her former self. And that proud acknowledgement, that ‘this is me, and that was me, too’ is to be admired. Of course, it helps that that other self was the author of ‘Will You Still Love Me Tomorrow’, the soundtrack to about 50 million backseat deflorations; and Barry Mann’s ‘Who Put the Bomp?‘.

Carole’s ‘Up On the Roof’ from “Writer”, although unfortunately burdened down by strings, is an early template for an entire catalog of hits, the piano/acoustic guitar-based, mellow palette of James’ ‘You’ve Got a Friend’ (January, 1971), ‘Handy Man’ (1977), and ‘Up On the Roof’(1979, unfortunately blighted by unka-BOOM! drums in the last verse).

During 1970, as “Sweet Baby James” took off, Carole toured as the pianist of James’ band. He would give her a guest spot on his shows, to which the audience responded with boos—they wanted to hear their James singing ‘Sweet Baby James’ and ‘Fire and Rain’, not some anonymous chick pianist, even if she had written some good oldies. She would sing ‘Up On the Roof’ and ‘Natural Woman’ above the boos. Here’s James’ beautiful solo version of ‘Up On the Roof’ from the Fillmore East in January, 1971. Returning from that tour to LA later that month, the band (Carole, James, Larkey, O’Brien, Kootch) went into the studio to record a batch of new songs that Carole had written by herself, working for the first time mostly without the help of lyricists Goffin or her new buddy Toni Stern. She called the album “Tapestry”.

The album also included the most vulnerable, powerless expression of a girl’s dependence on a guy’s caprice, ‘Will You Still Love Me Tomorrow’, an ‘oldie’ in the most profound sense: it’s beautiful, it’s full of nostalgic meaning for the me who once was, but its reality is in the past. ‘Natural Woman’, although written back in NY, belonged more to the new LA Carole. It became, justifiably, the anthem of the new womanhood—just as Carole’s life was a harbinger of the feminist revolution that was about to change the world as we know it. 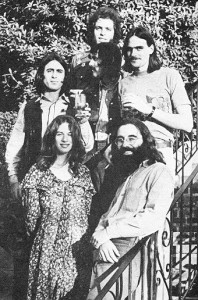 The new songs on the album – ‘I Feel the Earth Move’, ‘So Far Away’, ‘You’ve Got a Friend’ harnessed Carole’s masterful (mistressful?) pop-hit chops to the new womanhood (and concomitant malehood) she and her generation were creating. “Tapestry” justly earned its place as a seminal cultural landmark, as the soundtrack of its time.

In April, 1971, the still almost unknown Carole recorded seven songs for the BBC. She begins with a fully confident ‘I Feel the Earth Move’ and a heartfelt, definitive ‘Natural Woman.’ But her introduction to ‘So Far Away’ shows just how much she still saw herself as second fiddle to James Taylor. It’s the ‘Will You Still Love Me’ Carole speaking. Apparently for all her independence, Carole was serially subservient emotionally to the men in her life (but that’s a wholly other kettle of fish).

You gotta remember – till Carole (and Joni Mitchell and Laura Nyro) came along, male artists held primacy over women. Those three, each in her own way, created the persona of the new woman in music.

How strange it is to hear no audience response to the opening chords of the still-unknown ‘It’s Too Late’ (with James, Larkey and K 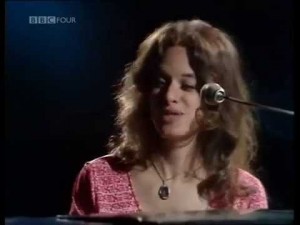 ootch). A fine, fun ‘Smackwater Jack’ shows just how much she’s the master – mistress? Why is the master by definition above, the mistress below? – well, she owns the pop song idiom.

She gives us a fine, heartfelt ‘Will You Still Love Me Tomorrow’, then ends with her definitive treatment of ‘Up On the Roof’. Her singing and her piano are confident, in control, fully mature as a performer and as a creative voice, absolutely ready for and deserving of donning the mantle of spokessongstress of her generation.

In an upcoming SoTW, via her early live recordings of ‘Up On the Roof’, we’re going to return to one of our favorite themes – just how major an artist Laura Nyro was.

On the roof, it’s peaceful as can be
And there, the world below can’t bother me
Let me tell you now

At night, the stars put on a show for free
And, darling, you can share it all with me
I keep-a tellin’ you