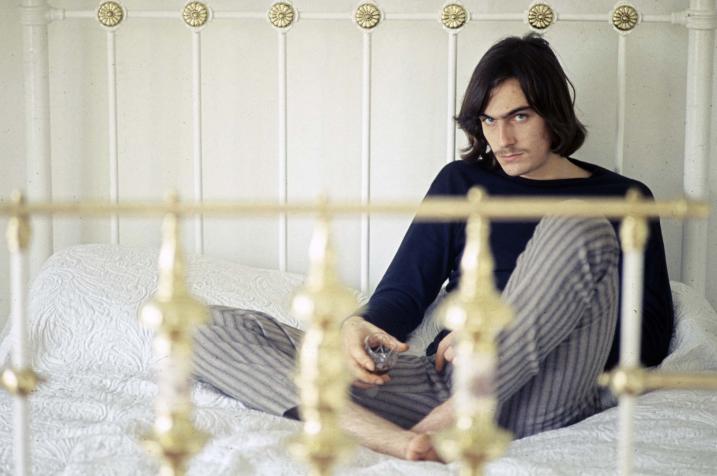 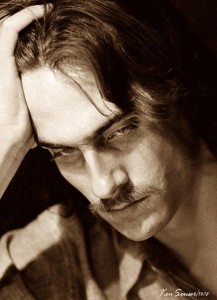 There’s some music I love so deeply, and feel so intimate with, that I refrain from writing about it, as if to do so would be to be to betray a confidence. There’s also music that packs so powerful an emotional charge for me that simply thinking of it wipes the grin off my face, hearing it can easily make me cry. And there’s music that I estimate far above its market value – no matter how many people tell me I’m overstating the case, in my eyes it’s almost as perfect as my granddaughter.

James Taylor’s first album, the one he recorded for Apple two years before “Sweet Baby James” is all of those for me.

James was born in Massachusetts in 1948, grew up in Chapel Hill, North Carolina where his father was dean of the UNC School of Medicine (when he wasn’t off drinking himself into a stupor or hiding from his family and the world in Antarctica). One of five musical siblings, James spent summers and went to prep school back in Massachusetts, but he soon spent a year in a mental hospital to deal with his depression. Something’s wrong, that restless feeling’s been preying on your mind. 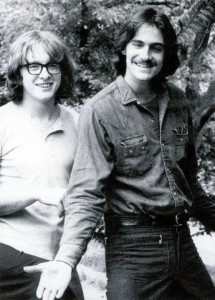 At 18 he was living as a musician in NYC and had begun using heroin. At 19, ‘sweet dreams and flying machines [his band] in pieces on the ground’, the heroin habit full-blown, his father drove up to New York to bring him home. A moment’s rest was all he needed.

Six months later, late 1967, James moved to London. Just a town like any other, a second brand-new start. A friend hooked him up with Peter Asher, formerly of the popular duo Peter & Gordon, who had hits with ‘World Without Love’, ‘Woman’, and a bunch of other songs written for them by Peter’s sister’s boyfriend, Paul McCartney. After the duo broke up, Peter went to work for the newly-formed Apple. He heard James’ demo tape, played it for Paul and the boys, and James became Apple’s first non-British signing.

He had some songs from his previous band (‘Knocking Round the Zoo’, ‘Rainy Day Man’, ‘Something’s Wrong’) and needed to fill out the material for a complete album. But with an Apple contract in his hand and pure heroin in his pocket, he was living the high life. “The whole thing was like a swirl. I stayed in lot of different places, I lived with a number of different women, writing a lot of songs like ‘Carolina in My Mind’ and ‘Taking It In’, and forming and breaking off and exchanging volatile romantic attachments.” Wrap your hands around that small change and tiptoe barefoot out the door. 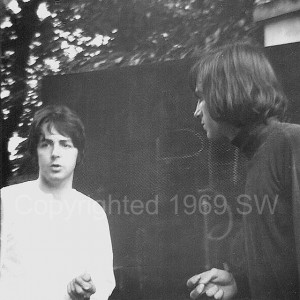 There was also that night when he was playing with a matchstick cabin and a candle, climbed out the window along a ledge, jumped from one rooftop to another and then onto a tree and then into his car for a wild spin and then climbed back into the apartment through the window, only to discover that the cabin had exploded and blown a hole in the table and ceiling above. “I later thought of that as pretty irresponsible.” (James Taylor bio by Timothy White, p. 136.) Road maps in a well-cracked ceiling, the signs aren’t hard to find.

Or as he said so perceptively years later in an interview with Charlie Rose, “When you’re 20, you’ve just been issued the equipment you’re going to be using for a whole lifetime—the body, the mind, the skills, the talents, the appetites…” 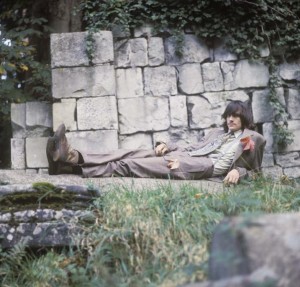 Thankfully and surprisingly, James made it into the studio in February, 1968, where he was booked during gaps between the Beatles’ “White Album” sessions. Although the Beatles and Asher recognized the personal, meditative nature of James’ music, Paul decided to couch it in an art-deco setting provided by Richard Hewson, who had done the arrangement for Beatles protégée Mary Hopkins’ hit, ‘Those Were the Days’.

Hewson added brass on the up-beat bluesy numbers, strings and oboes and whatnot on the downers, and a lot of artsy rococo harpsichord connecting tracks to create the faddish impression of ‘concept’ continuity which The Beatles had invented a year earlier in the same studio. 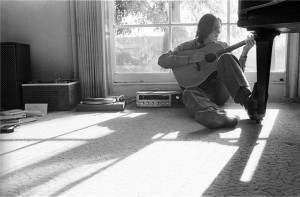 There’s lots of cute trivia we could tell you about the album. Paul plays bass on ‘Carolina in My Mind’, the first time a Beatle was credited as collaborating with another artist. George sings on the cut, uncredited. “It was the Beatles, by the way, that I was referring to when I sang about ‘There’s a holy host of others standing round me’”. George’s ‘Something‘ was inspired by James’ ‘Something in the Way She Moves.’ James admitted to being “stoned for most of the sessions” on speedballs of smack and methedrine. Driving strung-out through London, he knocked a drunk fleeing police eight feet into the air. His friend Suzanne killed herself at this time, but their common friends with whom James was living hid the fact from him till the recording sessions were over (“Just yesterday morning they let me know you were gone.”) 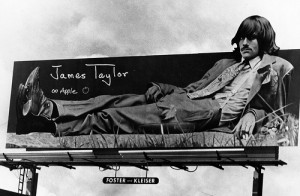 James has other pre-“Sweet Baby” material, all of it riveting in its unflinching candor: a full video of him on solo guitar at the BBC, and even better a bootleg audio of a concert in Syracuse (here are ‘Sunshine, Sunshine’, ‘Carolina’ and ‘Rainy Day Man’; I’ve also written a posting about his moving treatment of ‘Yesterday’ from this concert). And here’s Apple’s promo video of ‘Something in the Way She Moves’, 1968.

If I could approach the album “James Taylor” objectively, I might agree with all the critics and fans who dismiss it as a rough warm-up for the 1970 landmark “Sweet Baby James,” which contained two mega-hits and created a folk-rock sound (with Carole King on piano) which is still a profoundly influential template of the popular music palette.

But I can’t. I admit I find his 1968 vocals just a bit annoying–thin, reedy. His voice improves immeasurably over the next two years, settling into his oh-so-comforting gentle, warm baritone. 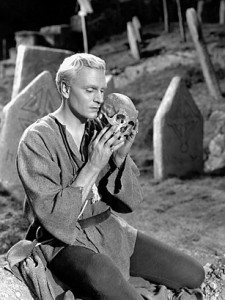 But these songs. ‘Don’t Talk Now.’ ‘Something’s Wrong.’ ‘Sunshine, Sunshine.’ ‘Something in the Way She Moves.’ ‘Carolina in My Mind.’ ‘Rainy Day Man.’ In my mind, in my heart, they’re associated with Hamlet, with Bach’s cello suites, with Bill Evans’ “Live at the Village Vanguard” – looking human life squarely in the eye for the first time and realizing down into the very marrow of your being that it ain’t no bowl of cherries. Who among us doesn’t know that that is the seminal moment of our life, when at 20 we first look out at the world from the vantage of an adult and first realize what actually awaits us?

Some of the other songs are more explicitly existential in subject matter. ‘Something’s Wrong’ is ostensibly merely about sneaking away in the early morning from an anonymous tryst, driven by anomie, restlessness, angst; moving on, yet knowing that to do so is futile. When things get bad I’m bound to pack my bags and just leave them all behind.

But it’s the futility here that is so harrowing. The inescapability, the inevitability, the permanence of this condition. That restless feeling’s been preying on my mind.

Something’s wrong, that restless feeling’s been preying on your mind.
Road maps in a well-cracked ceiling, the signs aren’t hard to find. 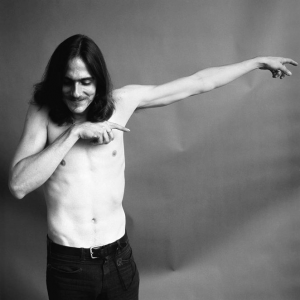 I won’t try to tell you that those are the fines words of poetry ever composed, or that they rival ‘To be or not to be?’ But they’re certainly talking about the same moment in a young man’s life, where he first understands the weight – the cost – of the life awaiting him.

We go along, day by day, year by year, decade by decade, humming to ourselves ditties of complacency and good cheer. We spend our lives trying to kid ourselves, trying to recolor it, trying to suppress. But since that terrible, profoundly horrifying day when we were 20, we have known the score: Something’s wrong.

Something’s wrong, that restless feeling’s been preying on your mind.
Road maps in a well-cracked ceiling, the signs aren’t hard to find.

Now I’m not saying that you’ve been mistreated, no one’s hurt you, nothing’s wrong.
A moment’s rest was all you needed,
So pack your things and kindly move along.

Like dust in the wind you’re gone forever.
You’re wind-blown leaves, you’re a change in the weather.

Just a town like any other, a second brand-new start.
A third or fourth hand wife or lover; no, you won’t break her heart.
Take some bacon, go on and leave your watch chain, she won’t count on nothing more.
Wrap your hands around that small change and tiptoe barefoot out the door.

Yes, something’s wrong, that restless feeling’s been preying on my mind.
When things get bad I’m bound to pack my bags and just leave them all behind.