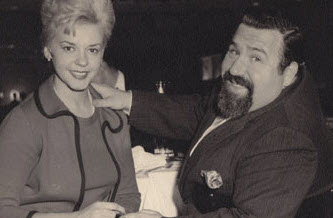 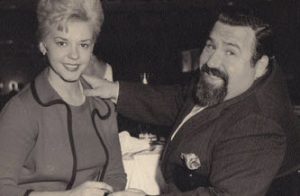 Doc Pomus’s wedding. In just a moment, she’ll be getting up to go dance with some other guy.

The Drifters – ‘Save the Last Dance for Me’

Such was our youth: looking at girls, looking for girls, dreaming about girls; cars, hamburgers, baseball; but mostly listening to the Top 40, songs about cars, hamburgers and girls. 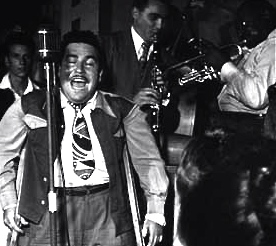 He also didn’t act Jewish. In the late 1940s and early 1950s you could see him hanging out in black clubs, performing with the likes of  Milt Jackson, Mickey Baker and King Curtis, cutting a stack of ‘race records ‘ such as ‘Give It Up’ and ‘Love My Good Pott’ (oh, yeah, Doc, that second ‘t’ really is really convincing). By the mid-Sixties he was focusing his efforts on writing for the likes of Lavern Baker, Ruth Brown, and Big Joe Turner, scoring with one of Ray Charles’ first hits, ‘Lonely Avenue’.

Wind it back. Jerome Felder (1925-1991) was a nice Jewish boy from Brooklyn, severely crippled by polio as a child—short, rotund, on crutches. Still, he had enough juice to marry a hot blonde actress, Willi Burke (more about their wedding in a minute). On their honeymoon, he heard The Coasters singing ‘Young Blood’, a song he’d written and passed on to Jerry Leiber and Mike Stoller. They’d rewritten it, but gave Doc a royalty check of $1500, convincing him to leave blues shouting and turn to writing songs for the white kids.

But he was already 33, fine for a bluesman, but an old man in terms of the pop loop. So he grabbed a nice boy who was dating his cousin when he wasn’t playing piano, Mort Shuman, 11 years his junior. Together they had a string of pantheon hits including ‘A Teenager in Love’ (Dion), ‘Hushabye’ (The Mystics, later The Beach Boys), ‘This Magic Moment’ (The Drifters), ‘Sweets For My Sweet’ (The Drifters, later The Searchers), ‘Can’t Get Used to Losing You’ (Andy Williams); and ‘Little Sister’, ‘Suspicion’, ‘Surrender’ and ‘(Marie’s the Name) His Latest Flame’, all for Elvis.

In 1965, Mort Shuman moved to Paris. Doc spent the next ten years working as a professional gambler, then returned to music to collaborate with Dr. John and others. It’s all documented in the book “Lonely Avenue” and the film “AKA Doc Pomus”. 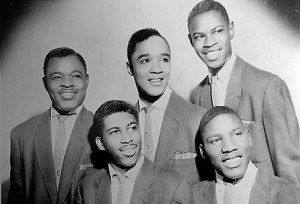 Mortie’s and Doc’s was a true collaborative effort. Doc would write 75% of the words, Mort 75% of the music. One afternoon, Mortie played a ‘soaring’ melody for Doc. That night, rummaging through a hatbox of memorabilia, Doc came across his wedding invitation and had a flash of his most vivid memory: he in his wheelchair watching his lawyer brother Raoul dancing with his new bride. He set to writing. By morning, he had finished ‘Save the Last Dance for Me’.

They gave it to their buddies Leiber and Stoller, who were having a string of successes with the Coasters at Atlantic studios. L&S had been given their first opportunity to produce another group – The Drifters, with lead singer Ben E. King – when owner Ahmet Ertegun and honcho Jerry Wexler were too busy. The song was originally slated to go to Jimmy Clanton. Thankfully, fate intervened. Doc and Mort wrote Jimmy ‘Go, Jimmy, Go’ as compensation. 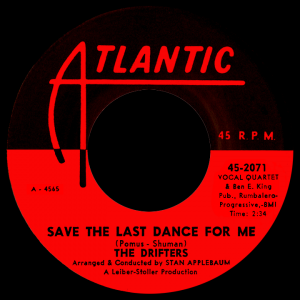 The resulting sessions were made under the tutelage of engineer Tom Dowd, who had installed at Atlantic studios one of the three eight-track boards in existence (the other two being owned by Les Paul and the Department of Defense). I recently rewatched this documentary about Dowd, and can’t recommend it highly enough. At 19 he was on the team that built the first A-bomb. Eric Clapton says that “Layla” was essentially Tom Dowd’s album. Go watch that film.

Those Drifters sessions included ‘There Goes My Baby’, the first commercial rock-and-roll recording to include a string orchestra (Leiber: “There were some string instruments lying around the studio from some other session”.) The subsequent sessions included ‘Mexican Divorce’ and ‘Please Stay’ (Bacharach-Hilliard); ‘When My Little Girl is Smiling’ and ‘Some Kind of Wonderful’ (Goffin-King); and ‘I Count the Tears’, ‘Sweets for My Sweet’, ‘Nobody but Me’, ‘A Room Full of Tears’, and ‘Save the Last Dance for Me’ (Pomus-Shuman). 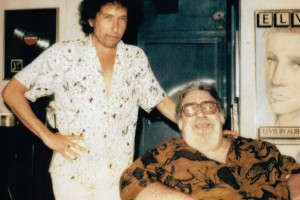 According to Leiber, Ertegun and Wexler were constantly giving the producers flack for bringing in more and more instruments (strings, kettle drums and whatnot). Do you think that had any influence on a young guy hanging around the studio named Phil Spector? E&W still were furious a few months later when a solo session with Ben E. King ran an hour overtime. The session yielded ‘Spanish Harlem’ and ‘Stand By Me’.

In a rare blunder, Ertegun and Wexler released ‘Save The Last Dance For Me’ as the ‘B’ side of the single headed by ‘Nobody But Me’. Thankfully, Dick Clark himself had the prescience to flip it over. The result was a #1 hit, #184 on Rolling Stone’s 500 Greatest Songs of All Time. 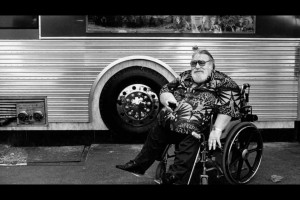 Do I need to tell you how great the song is? How brilliant the arrangement and production? Noteworthy covers include (take a deep breath): Michael Bublé, Bruce Springsteen (recommended), Emmylou Harris (one of many country covers), Leonard Cohen (why, Lennie?), Nilsson (in dark half-time), The Righteous Brothers, Blake Mills with Derek Trucks  from Eric Clapton’s Crossroads Guitar Festival CD, and Aaron Neville from the tribute album “Till the Night is Gone: A Tribute Album to Doc Pomus”. Even The Beatles gave it a shot on the “Let It Be” sessions.  Jimmy Clanton would have done it better.

There’s only one cover that can hold a candle to the masterpiece that is the original– Ike and Tina Turner, produced by Phil Spector from the same session that gave us ‘River Deep, Mountain High’! But thankfully one magic moment doesn’t preclude another.

Just before the recording, Ahmet Ertegun told Ben E. King the song’s backstory, inspiring him to express so eloquently the maelstrom of emotion raging in the narrator – secure in the knowledge that she is now wearing his ring; but yet wheelchair-bound, jealous and vulnerable, watching her dance ‘with another guy’. All in 2’34”. Oh, that stack of 45s contained a world of wonders.

You can dance every dance with the guy who gave you the eye, let him hold you tight.
You can smile every smile for the man who held your hand ‘neath the pale moonlight.
But don’t forget who’s taking you home and in whose arms you’re gonna be–
So darlin’, save the last dance for me.

Oh I know that the music is fine like sparkling wine, go and have your fun.
Laugh and sing, but while we’re apart don’t give your heart to anyone.
But don’t forget who’s taking you home and in whose arms you’re gonna be–
So darlin’, save the last dance for me.

Baby don’t you know I love you so? Can’t you feel it when we touch?
I will never, never let you go, I love you oh so much.

You can dance, go and carry on till the night is gone and it’s time to go.
If he asks if you’re all alone, can he take you home, you must tell him no.
But don’t forget who’s taking you home and in whose arms you’re gonna be–
So darlin’, save the last dance for me.