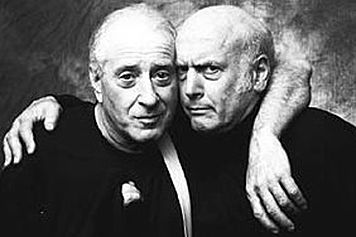 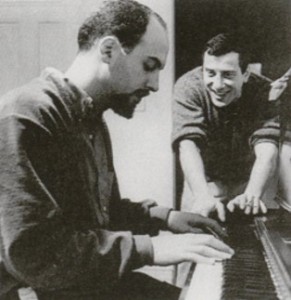 Jerry Leiber and Mike Stollerwere the first great record makers of rock and roll. This week’s song is going to a favorite among their many, many, many hits. I hope you’ll bear with me if a take a somewhat circuitous route in getting to it.

Know what a shaggy dog story is? “An extremely long-winded tale featuring extensive narration of typically irrelevant incidents, usually resulting in a pointless or absurd punchline.” Well, that’s me to a T. But maybe you’ll find some of those Leiber and Stoller incidents  as interesting as I do. If not, I won’t be hurt. Just click on the links and enjoy their very fine music.

Jerry Leiber and Mike Stoller were both born in 1933.

Stoller grew up in NY, his first exposure to black music was at an integrated sleep-away camp in 1941(!) where Paul Robeson was a guest artist singing spirituals and Hebrew folksongs. Stoller heard a black kid playing boogie-woogie in a barn, which he says changed his life. Back home, he took piano lessons with James P. Johnson (1894-1955), king of the stride piano, composer of “The Charleston”, mentor of Fats Waller, compadre of Willie ‘The Lion’ Smith and Bessie Smith. In his early teens, Stoller fell under the spell of Charlie Parker and Thelonious Monk, the luminaries of bebop. 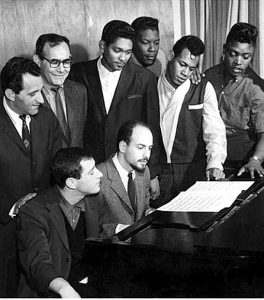 Leiber grew up in poor Baltimore, fought in street gangs, blacks and black music an integral part of the social landscape. He says that his musical revelation was as a kid washing dishes in an all-night diner, watching the short-order cook leaning back with a joint hanging out of his mouth, listening to Jimmy Witherspoon’s “Ain’t Nobody’s Business“.

Leiber and Stoller met up in 1950 in LA, two 17-year old Jewish boys bubbling with enthusiasm for R&B. In 1951 they managed to get a few songs recorded for some ‘minor labels with major talents’, including even the young Ray Charles. In 1952 they wrote “Kansas City” for Little Willie Littlefield, which became a hit for Wilbert Harrison in 1959, and was eventually recorded by some 300 artists including The Beatles.

One morning they got a call from guitarist/producer Johnny Otis. He was in his garage rehearsing with Willie Mae “Big 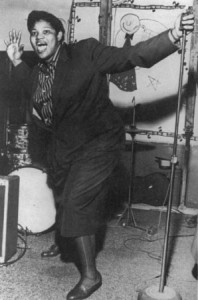 Mama” Thornton. He needed a song for her. Our boys wrote it in minutes and drove over to Otis’s garage. There they met Ms. Thornton attired in her combat boots and oversized overalls. Mike played the song on the piano, and she began to croon it.

“Come here, boy,” she said, motioning me to stand even closer to her. “I’ll tell you what you can attack. Attack this…” she added, pointing to her crotch.

Johnny Otis came to the rescue, saying “You sing it Jerry, you show Big Mama how it goes.” This is the result (you want to watch this clip, trust me).

Leiber and Stoller were paid $1200 for the song, but the check bounced. Released in 1953, it did fairly well by R&B’s modest commercial standards, but within one month 5 more versions had been recorded.

In the mid-50s, white kids were beginning to become attracted to the dangerous sexuality of black rhythm and blues – but it was a bit too raw and threatening, so they greatly preferred to buy white versions of black music. The first commercially successful rock and roll songs were Bill Haley’s 1954 sanitized cover of Big Joe Turner’s “Shake Rattle and Roll”, and “Rock Around the Clock” in 1955. 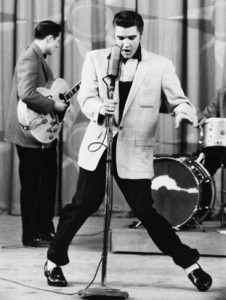 There were lots of clones and imitators of Bill Haley, including a long-forgotten Freddie Bell and the Bellboys. In 1956 They were having a successful run in Las Vegas, and one of their popular numbers was a jokey, novelty version of Big Mama’s “Hound Dog”. Elvis Presley and his band were having an unsuccessful run in Vegas at the same time. They watched Freddy Bell nightly. Elvis liked the song, and adopted it as his show-closer. When he appeared with it on Milton Berle’s TV show, over 40,000,000 people saw the performance, and the network received thousands of letters of complaint about how ‘Elvis the Pelvis’ was promoting juvenile delinquency. It’s well worth watching both this clip for the music, and this one for the sex.

I guess that’s when life as we’ve known it in the second half of the twentieth century really started.

In 1956, Stoller was vacationing in Paris. He and his wife were returning to New York on the luxury liner the S.S. Andrea Doria. It collided with another ship and 46 passengers died. Stoller and his wife made it into lifeboats. 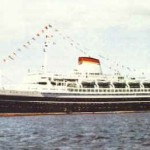 Jerry ran up to me on the pier saying, “Mike, you’re okay!” before adding, “We have a smash hit.”
“You’re kidding?”
“Hound Dog.”
“Big Mama Thornton?”
“No, some white kid named Elvis Presley.”

Although Leiber and Stoller had great respect for Elvis as a performer, they never really liked what he did to the song. They eventually became the main songwriters for his movies, producing dozens of songs which Elvis recorded, including “Love Me,” “Loving You,” “Don’t,” and “Jailhouse Rock.” For a while they were becoming quite friendly with Elvis, but Colonel Parker didn’t like those Jewish boys hanging around his golden rooster and kept them away. 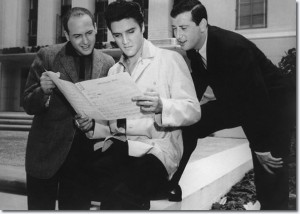 Meanwhile, back at the ranch, Leiber and Stoller had met up with Nesuhi and Ahmet Ertugun, sons of the Turkish ambassador to the US, great jazz and R&B fans, owners of Atlantic Records.  Leiber and Stoller were soon grinding out major hits for Atlantic for The Coasters.

They used The Coasters to paint aural pictures, their own very wonderful version of comic-book blues.

These hits left an indelible mark on popular music for two reasons. First, because as L&S said, “We didn’t write songs; we wrote records.” They wrote not just the song, but also the arrangement, the style, the sound, the nuances of the vocal performances, the entire production. And in that, they were the first real creative artists in the popular idiom. In that, they predated the Brill Building songwriters, not to mention The Beatles and Dylan and the generations of music makers they inspired. 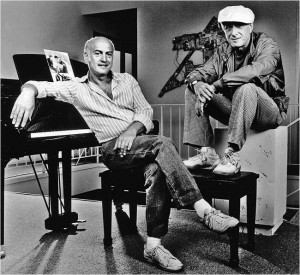 Impossible a task it is, but house rules say I have to pick just one for our SoTW. Should it be the first, “Riot in Cell Block #9“, the manic genius anarchical jailhouse opera production? The paean to STD “Poison Ivy” with the greatest couplet in rock annals, “You’re gonna need an ocean/of calamine lotion”? No, let’s just go with the greatest of the great, the anthem of all the sullen, acned, lethargic adolescents we all were–”Yakety Yak“. Written just for me and ‘all my hoodlum friends outside’. 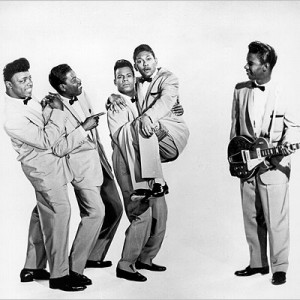 Don’t you give me no dirty looks
Your father’s hip; he knows what cooks
Just tell your hoodlum friend outside
You ain’t got time to take a ride
Yakety yak (don’t talk back)

Leiber and Stoller’s career didn’t end there. They had hundreds and hundreds of memorable hits (‘On Broadway’, ‘Stand By Me’, ‘Spanish Harlem’, ‘Ruby Baby’,  ‘Only in America’, ‘Is That All There Is?’, 20 songs by Elvis, many if not most of The Beatles first recordings), and still write on occasion. 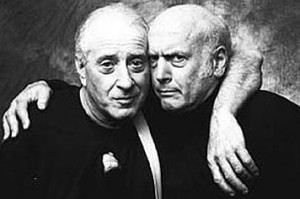 One reader told me that I was focusing too much on singers with morbid, sensationalist, Yellow Journalism sob story bios – Blind Willie Johnson, Eva Cassidy, Radke Toneff. Well, no one’s going to make an afternoon TV movie about Leiber and Stoller. But someone did make a very successful Broadway show.

In 1995, Smokey Joe’s Cafe: The Songs of Leiber & Stoller opened on Broadway – 39 songs by L&S, running for over five years, the longest-running musical revue in Broadway history.