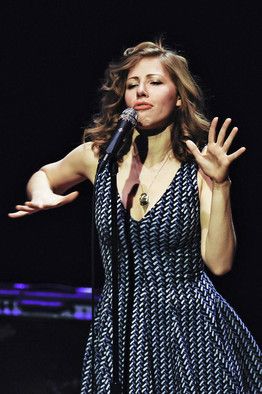 Something is happening here, but you don’t know what it is… 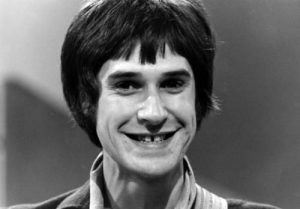 Remember him? – the butt (sic) of so many jibes in Dylan’s ‘Ballad of a Thin Man’, one of his hallucinatory masterpieces from “Highway 61 Revisited”. The song is a diatribe against a bespectacled, white boxer-shorted Republican with a pen protector caught at a gay bash. Perhaps he’s there on his own accord, perhaps drawn by a latent sense of titillation.

That’s how I feel. Well, kind of. Mama told me not to come.

I’m going to be talking here about sexual identity, particularly gender-bending, in a song written in 1970 by Ray Davies for The Kinks about an innocent lad falling for a transvestite, and covered in 2018 by Rachael Price and Lake Street Dive.

Full disclosure: I grew up in a world where there were ostensibly two genders, with very, very rare exceptions. I have always fully identified with the blue, outdoor-plumbing camp, and have been exclusively attracted to members of the pink, indoor-plumbing proclivity.

I get that the world has changed, that the rules and the terminology (and maybe even the taxonomy) have changed from when I first learned about birds and be’s. But hardwiring and cultural conditioning prevail—I still find some things difficult to process.

I watch a lot of Danish television. I’ve learned a new word there: “O-ka-ay”, pronounced with a lilt at the end. Example:
A: “My mother married her pet llama last week.”
B: “O-ka-ay”.
Everything goes. Enlightened, those Danes.

Not me. I’m still operating off an Ozzie and Harriet template, albeit struggling hard to avoid being judgmental. Bottom line: I don’t care what anyone does in private. There are lots of things that make me uncomfortable in public. Such as flaunting sexuality of any flavor. And I sincerely do apologize in advance if any cave-man prejudices slip out here. I really am trying.

When Ray Davies spun his tale of a bumpkin falling for Lola, who mysteriously ‘walked like a woman but talked like a man’ back in 1970, I got the humor. It was risqué, it was hilarious, and it somehow slipped past the Arbiters of Morality. 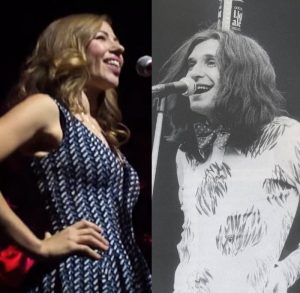 Who would you rather gape at?

The stuff everyone knows: The Kinks were one of the best bands to follow in the wake of The Beatles. The power-riff of their very first hit, ‘You Really Got Me’, had an inestimable impact on heavy metal and punk rock. Leader Ray Davies wrote a string of indelible, intelligent, touching songs: ‘Sunny Afternoon’, ‘Waterloo Sunset’, ‘Tired of Waiting for You’, and my personal favorite ‘See My Friends’.

The stuff no one knows about ‘Lola’: In the original version, Ray sings “Coca Cola” in the first line. In the middle of a US tour, he was flown back to the studio in London for one day (6000 miles) to change that to “cherry cola” in order to avoid the BBC ban on ‘product placement’. Band members offer at least three versions of the ‘authentic’ back story to the events described. The opening riff is a Martin guitar heavily compressed together with a vintage Dobro resonating guitar. The character of Lola reappears in the Kinks’ song ‘Destroyer’. 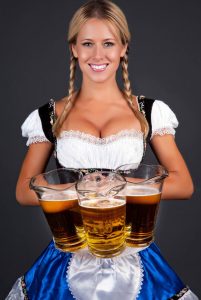 There’s a truish story about Sigmund Freud, Ludwig Wittgenstein, Bertrand Russell, Srinivasa Ramanujan, Albert Einstein, Herman Kahn and a few others being invited to a Great Minds of the 20th Century colloquium to discuss “The Meaning of Meaning”. They’re standing around, postulating and prevaricating and presumptuating away, when La Barmaid comes in with a tray of drinks (see illustration). And you know what happened? Dead silence. Décolletage trumps dialectics.

The band has a new album, “Free Yourself Up”.  They’re fine, serious musicians. Their minimalist setting (voice, trumpet, bass, tambourine) makes me think of the Gerry Mulligan/Chet Baker pianoless quartet, coolly but intensely interweaving two or three monophonic lines to create an ephemeral sense of a harmonic weave. They write hookless songs. Well, I guess there are hooks, they just don’t repeat themselves. Which is kind of the definition of a hook, isn’t it? 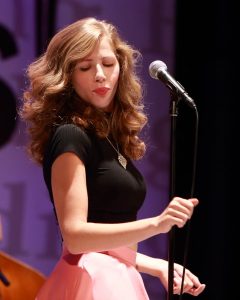 Not to diminish the band. I like ‘em just fine. But to tell the truth, I bought my ticket to hear Rachael. She is one prodigious talent. And to see her. She is, as Charlie Young says to Josh Lyman (regarding Mary-Louise Parker), “That’s one fine-looking woman”.

Here’s a straightforward live performance of the song ‘I Can Change’ from the new album. And here’s the official video. Mr Jones is sitting on my shoulder. I don’t understand the message of that clip. It’s a striptease about a striptease where the lady’s wearing a skin-colored body suit. Cognitive disconnect. Short-circuit. Bzzzzz and wafts of smoke coming out of both of my ears.

Recently LSD has been covering ‘Lola’. Rachael Price takes on the persona of the clueless lad rising to the come-on from sultry, seductive Lola, s/he with the prominent adam’s apple. She sings, “I’m not the world’s most masculine man, but I know what I am, I’m glad I’m a man!”

Rachel Price, the most non-man on God’s planet. Talk about gender fluidity! Something’s happening here, but you don’t know what it is—do you, Mister Meshel?

I mean, this is a woman who speaks a language I understand. Like when she puts her hand on that cocked hip. Or says ‘Oh-oh-oh’. [Editor’s tip: Watch that link a few times.] But that’s just the packaging. That voice? Such pipes, such strength, such emotional and technical control. I’m thinking Sarah Vaughan, if that’s not being disrespectful.

Or check out Rachael covering Aretha’s ‘Give Him Something He Can Feel’. Bring me a glass of water, will you? I didn’t blink for eight minutes. Heck, I’m not sure I breathed. Pardon the blasphemy, but I don’t remember enjoying a “blue-eyed soul” singer so much since Janis Joplin. But we come to praise Rachael, not to bury her in superlatives.

While we’re here, I can’t help but share Aretha singing the song live. Sure am glad she didn’t wear that outfit in her more corpulent years!

Introducing this live version of ‘Lola’, Rachael says “You can love whoever you want to love, and that’s what this song is about.” Oh, well. I’m reminded of that aforesaid barmaid.

I could sit back and say that LSD’s take on ‘Lola’ lacks conceptual coherence.
But with all due respect for contemporary mores regarding gender fluidity, I choose to let my DNA take the lead and just watch that clip again. To gaze at Ms Price, and feel my heart go thumpity-thump-thump.

I met her in a club down in old Soho
Where you drink champagne and it tastes just like cherry cola, C-O-L-A cola.
She walked up to me and she asked me to dance.
I asked her her name and in a dark brown voice, she said Lola, L-O-L-A, Lola.

I’m not the world’s most physical guy, but when she squeezed me tight she nearly broke my spine,
Oh my Lola.
I’m not dumb but I can’t understand why she walked like a woman but talked like a man,
Oh my Lola.

We drank champagne and danced all night under electric candlelight.
She picked me up and sat me on her knee and said, “Dear boy, won’t you come home with me?”

That’s the way that I want it to stay, and I always want it to be that way
For my Lola.
Girls will be boys and boys will be girls, it’s a mixed up muddled up, shook up world
Except for Lola.

Well, I left home just a week before
And I’d never ever kissed a woman before
But Lola smiled and took me by the hand
And said, “Dear boy, I’m gonna make you a man.”

I’m not the world’s most masculine man, but I know what I am, I’m glad I’m a man!
And so is Lola.