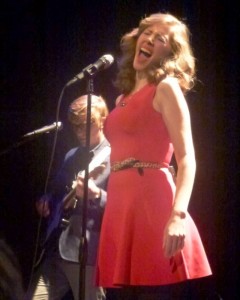 I tripped over this clip several weeks ago and am still floored. It’s the best music I’ve seen seen/heard in a month of Sundays.

It’s Lake Street Dive, an indie band with a unique and undefinable aesthetic covering ‘I Want You Back’, a silly Jackson 5 tune, on a Boston street corner. Drummer Mike Calabrese, bassist Bridget Kearney, and trumpet-playing guitarist Mike “McDuck” Olson. Oh, and vocalist Rachael Price—the eighth wonder of the world. Only chronologically is she only last on the list.

The clip is amazing. One drum, stand-up bass, trumpet, chick singer, some backing vocals. That’s it. It’s amazing enough that they get pristine sound and perfect balance in an almost spontaneous live outdoor take. But the music. Oh, the music. Here, watch it again. In case you’ve forgotten (I had), here’s the Jackson 5 original.

They can knock you out doing the minimalistest rock music you’ve heard since the Stone Age on a Boston Street corner. 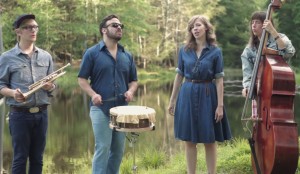 They can knock you out next to a lake outside Levon Helm’s studio.

They can knock you out in a recording studio (that’s Rachael singing her own song). 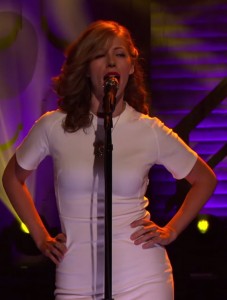 Writer, critics, and the band itself struggle to describe Lake Street Dive.

The band on the band: “The initial idea (2004) was for the band to create a ‘free country band” — as in country music, played free. This concept was quickly abandoned in favor of something that actually sounded good. But its roots remain.” “Pop-y, or perhaps Swing-ish, with a touch of Jazz.” “We want it to sound like the Beatles and Motown had a party together.”

Critics: “Country Punk.” “Sounds Like: Llewyn Davis’s favorite pop group; Motown meets the Brill Building in jazzy, soulful, woulda-been Sixties chart toppers.” They evolved from “a weird alt-country jazz group to a pop-soul juggernaut, with ’60s influences like Brill Building girl groups (‘Stop Your Crying’), British Invasion rock (‘Bobby Tanqueray‘), horn-driven Stax R&B (‘You Go Down Smooth‘), Motown soul (‘Use Me Up‘) and even The Band-like gospel blues (‘What About Me‘)”. 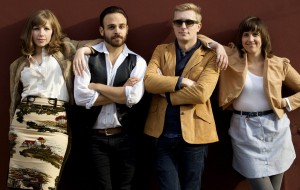 Jeff: “Oh, shut up and let me listen to (and watch) Rachael Price.”

My first association with Lake Street Dive was the Gerry Mulligan/Chet Baker 1952-3 pianoless quartet. No one tries to make group pop music without a harmonic instrument holding it all together—a rhythm guitar, a piano, a vibraphone, something. Mulligan/Baker explored contrapuntal group improvisation, which means that on top of the bass-drums floor, you have two monophonic instruments bobbing and interweaving with enough tightness and tension to create a harmonic fabric. It’s sort of like a trying to build a hummingbird nest by picking up twigs with your mouth, your hands tied behind his back. 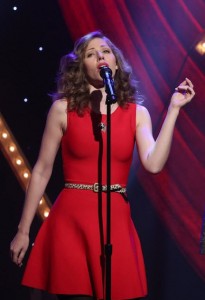 My second association was The Band. Not just because of the style of drummer Mike Calabrese, slapping on the kit with such humanity that the drums become not a necessary evil, but musical that’s worth listening to in and of itself (so reminiscent of Levon). Not only because of the tight, precise 2-and 3-part country harmonies kicked up into a whole new level of musical sophistication. Perhaps mostly because of their “D.I.Y. Sensibility”. (I asked a kid what that meant. He crooked an eyebrow with that ‘What planet do you live on?’ condescension. For those who want to avoid the humiliation, here’s a definition for you.) It has to do with an indie ethic vs The Industry, but I think also an organic attitude to the music itself—minimal orchestration, every note carefully and tastefully hand-picked, every phrase hand-crafted. Even the way the guy slaps his drums, just like a real human.

But my third association, and the one that’s stuck to my brain and my ears and my eyes and my kishkes is their singer, one Rachael Price. 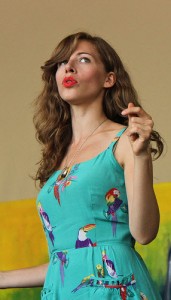 Try to forget the fact that she’s so stunningly sexy, one moment a librarian, the next a torch singer all aflame. She not only sings Lake Street Dive’s crazy indie-country-pop amalgam so remarkably, she has simply the greatest chops and stage presence I’ve heard/seen since forever. She has all the insouciance of Amy Winehouse, with whom she’s often been justifiably compared. But where Amy employed her Sarah Vaughan influences in the service of the provocative, Rachael is all femininity and sexiness.

In jazz, Rachael Price’s model is Anita O’Day. She’s influenced not only by her vocally, but by her 1950s feminine grace and panache. Here’s Anita in her legendary Newport performances. And here’s Rachael stunningly displaying her jazz abilities: ‘Cheek to Cheek’  (do you hear Anita’s vocals and style are all over it?). And here’s her recording of ‘That Old Black Magic’. Everybody’s sung it. Try to find a better version. Here’s her whole album of standards. Even without the indelible visual aids, Ms. Price is the best young female jazz singer I’ve heard (and I’ve listened to a lot of them).

And her range! Not only organic country punk. Not only classic standards. Check out Rachael Price singing Aretha’s ‘I Ain’t Never Loved a Man’ backed by the Muscle Shoals band. Do you know any other chick who can put over blue-eyed soul like that? I don’t. She’s one consummate vocal artist.

Lake Street Dive — you guys are great, and I wish you all the success in the world.

Ms Price – I bow to you, to your unlimited ability in such a range of styles, your taste, your presence, your sexiness, your prodigious talent.