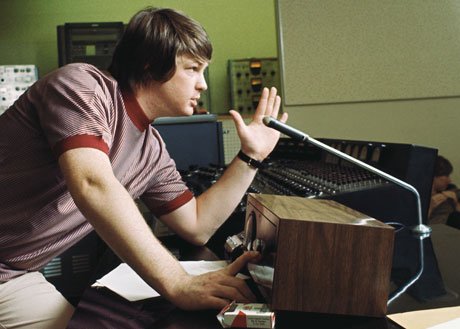 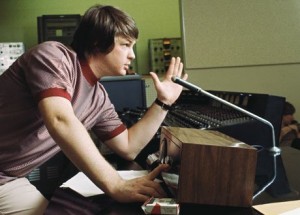 I’ve been perfecting my procrastination skills since I was bar mitzvahed. Well, even before—how well I remember avoiding practicing reading the torah portion before I pedaled off to meet the rabbi.

I’ve been listening to “Pet Sounds” regularly for 50 years now, and I’ve successfully put off writing about it. Because it’s too damned daunting. Because my respect for the album is so great that I know I don’t have a snowball’s chance in heck of doing it justice.

But if Mom shouted long enough and loud enough and persistently enough, I would finally pick up at least a couple of layers of dirty underwear from my floor. And so, I guess, the day of reckoning has arrived. 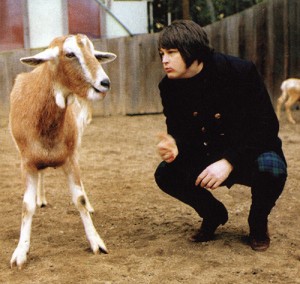 There are two kinds of people in the world – those who get “Pet Sounds” and those who don’t. If you’re one of those who say: “Oh, right, The Beach Boys. “Fun, Fun, Fun”. The stupid acned, hackneyed lyrics. The strident nasal vocals. Those painful striped shirts.”– I can only say, yeah, you’re right. (Except have you ever taken half a dozen fine singers and tried to sing “Fun, Fun, Fun”? Good luck.)

But if you’re one of those, you’re missing the transcendental melodies, the stunning internal harmonies, the genius of the orchestration, the utter beauty of the composition. You’re depriving yourself of what I think is – in strictly musical terms – the pinnacle of post-WWII popular music. I call the first witness, Sir Paul McCartney: “I love the album so much. I’ve just bought my kids each a copy of it for their education in life—I figure no one is educated musically ’til they’ve heard that album.” (Paul’s extensive commentary on “Pet Sounds”)

I call the second witness, Sir George Martin: “Without ‘Pet Sounds,’ ‘Sgt. Pepper’ never would have happened. ‘Pepper’ was an attempt to equal ‘Pet Sounds.'” (I highly recommend this clip of George and Brian listening together to the master recording of ‘God Only Knows’.)

I call the third witness, Brian Wilson himself: “After the Beatles heard Pet Sounds, they wanted to make a greater album, so they did Shargen Peppersh Lowly Harsh Cluband. And it was a very, very, very great album. Right up there with Pet Sounds, And it was, like, really good.” 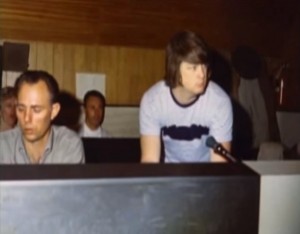 In case you just moved to earth from Planet 9: 1964 – in the plane setting out on yet another Beach Boys tour, 22-year old band leader Brian Wilson has a panic attack. He sends his brothers Carl and Dennis, cousin Mike, buddy Al, and replacement Bruce out on the road without him. “I’m going to stay in the studio and work, and when you guys get back, I’ll have lots of new material.” But unbeknownst to them, he called in The Wrecking Crew  LA’s premiere studio musicians (whom he’d met when observing Phil Spector sessions) to record the tracks. The boys added the vocals upon their return. 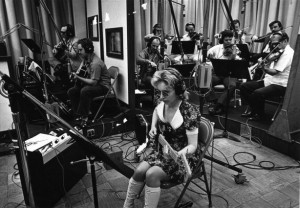 Rid of his abusive father and transported into other spheres by LSD, Brian felt liberated enough from the pressures of The Hit Machine to make his album. It was The Beach Boys’ first commercial failure.

I’ve watched films about The Wrecking Crew and The Making of Pet Sounds and The Art of Pet Sounds, listened to podcasts and read books and endless on-line accounts and analyses. I don’t remember a tenth of it, so I’m not going to try to write the definitive summary of all that is “Pet Sounds”. If you’re not already, I fervently hope you’ll be affected and infected enough to pursue it on your own.

If I have anything to contribute to the corpus of adulation, it’s from my subjective experiences from the literally thousands of times I’ve listened to the album. ‘My’ “Pet Sounds” consists of 10 of the 13 songs. I’ve always felt that ‘Sloop John B’ is an unfortunate implant, and that the instrumentals ‘Let’s Go Away for a While’ and ‘Pet Sounds’ don’t carry their weight. ‘Good Vibrations’, the original work for which was done during the “Pet Sounds” recordings, was wisely reserved for the next project (“Smile”).

Every one of these ten cuts is a world of beauty unto itself, to be relished and cherished and touched by. They are collectively as beautiful as music can be. 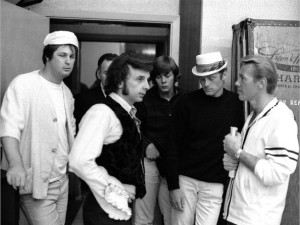 The heartwrenching slow pieces: ‘You Still Believe In Me’, ‘Don’t Talk’, ‘Caroline, No’.

The mid-tempo cuts, masterpieces each: ‘God Only Knows’, ‘I Know There’s An Answer’, ‘I Just Wasn’t Made For These Times’.

A few basic facts before we start – “Pet Sounds” was originally released in mono. In 1997 it was remixed for stereo under Brian’s supervision. Since then, there have been several rerereremasters and rerererereleases. Purists will go for the original, muddy mono. I go for the newer stereo remastered version – it lets me crawl inside the music, hear as many as possible of the bass harmonicas, ukuleles, bicycle horns, vibraphones, timpani, finger cymbals, Coke cans, accordions, modified twelve-string mandolins, and water jugs. 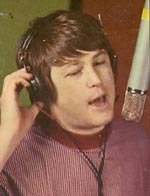 I do feel humbled, attempting to add my few sense to this magnum opus. But an arrested adolescent’s gotta do what an arrested adolescent’s gotta do. So today we’re going to pick one of the masterpiece cuts—‘Here Today’, a favorite among favorites – and walk through the recording process via “The Unsurpassed Masters”, a 21-volume, ~50-CD bootleg compendium of Beach Boys studio tracks in process, 1962-67.

I admit I haven’t listened to all the outtakes from “Beach Boys Party”. But I have listened to most of the “Pet Sounds” recordings, many of them numerous times. So here we go, 23-year old Brian, the finest studio musicians LA has to offer at his disposal, for the first time in his life in complete creative control. The Beach Boys Complete Unsurpassed Masters, Volume 14 (The Alternate “Pet Sounds”, Disc 2.

It’s mind-boggling to ponder that young Brian would order in for the next day’s recording session a string bass and an electric bass, a tack piano, two baritone saxes and two bass trombones. In other words, he had the orchestration of the arrangement down pat in his mind (he didn’t write musical notation), as well as leaving room for vocals when the guys would get back from Japan. 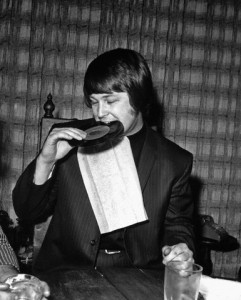 Takes 1 – 3 – Engineer: “I don’t have a title, Take 1”. Organ pumping on the beat, Carol Kaye’s bass introducing a stunning melodic counterpoint to the (yet unheard) main melody line (inspiring Paul’s lead bass on “Sgt Pepper”), then joined by the low drum ornament and the low brass and then the higher brass providing yet another counterpoint.

Take 7, Takes 8 – 10 – We know what the full track will sound like, so we can hear the ghost interplay between the heard backing track being compiled and polished, and the unheard future vocals. 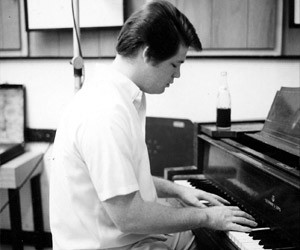 Insert Takes 1 – 4, 11 – 20 – Fine-tuning and tightening the glorious C-part, the instrumental break after the second chorus. Listen to Brian’s perfectionism, explaining to the musicians so precisely the sounds he’s looking for. I can’t help but think of Hitchcock’s saying that the actual filming was just technical work and rather boring—the creative process had occurred at home at his desk. Bruce Johnston has said “this is the break that Brian told me was influenced by Bach – and if you’ve heard any Bach at all, you’ll know what he’s talking about.”

1st Vocal Overdub by the band – Mike (“Don’t fuck with the formula”) Love’s initial attempts at singing the lead, mostly solo, backing vocals in the background.

2nd Vocal Overdub by the band – Mike double-tracked, with prominent backing vocals, The Beach Boys at their Four Freshman/Hi-Lo’s best. Worth the price of admission. 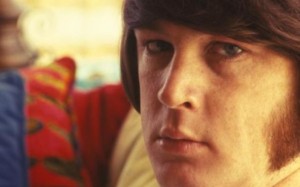 Brian, 1990: ‘Here Today’ was a work of art in my opinion. It was assertive track with utilization of basses played up higher. The trombones gave it that masculine touch…”
Brian, 1996: “‘Here Today’ was probably one of the mystery songs on the album. I don’t really know what it’s about. I liked it, but yet I didn’t. I don’t really identify with that song like I do with ‘You Still Believe In Me’, or ‘Caroline, No.’ It was just one of those songs in there, one little song.”

I get what Brian’s saying. ‘Here Today’ may not be the most emotionally affective cut on ‘Pet Sounds’. But it is indeed unsurpassed in terms of technical brilliance. In each of the 10 cuts, Brian creates a complete sonic universe of unique beauty.

That girls at puberty may find
The first Adam in their thought,
Shut the door of the Pope’s chapel,
Keep those children out.
There on that scaffolding reclines
Michael Angelo.
With no more sound than the mice make
His hand moves to and fro.
Like a long-legged fly upon the stream
His mind moves upon silence.

‘Quiet! Genius at work’ was never more applicable than here. Brian’s life after Pet Sounds was marred and scarred by drugs, emotional fragility and manipulative sycophants. In these tapes we can witness the process of Brian ‘reclining on the scaffolding’ in the Los Angeles studio. But still, it all remains ultimately a mystery. God Only Knows how genius creates such beauty.

142: Kat Edmonson, ‘Champagne’ (including her lovely cover of ‘I Just Wasn’t Made for These Times’)