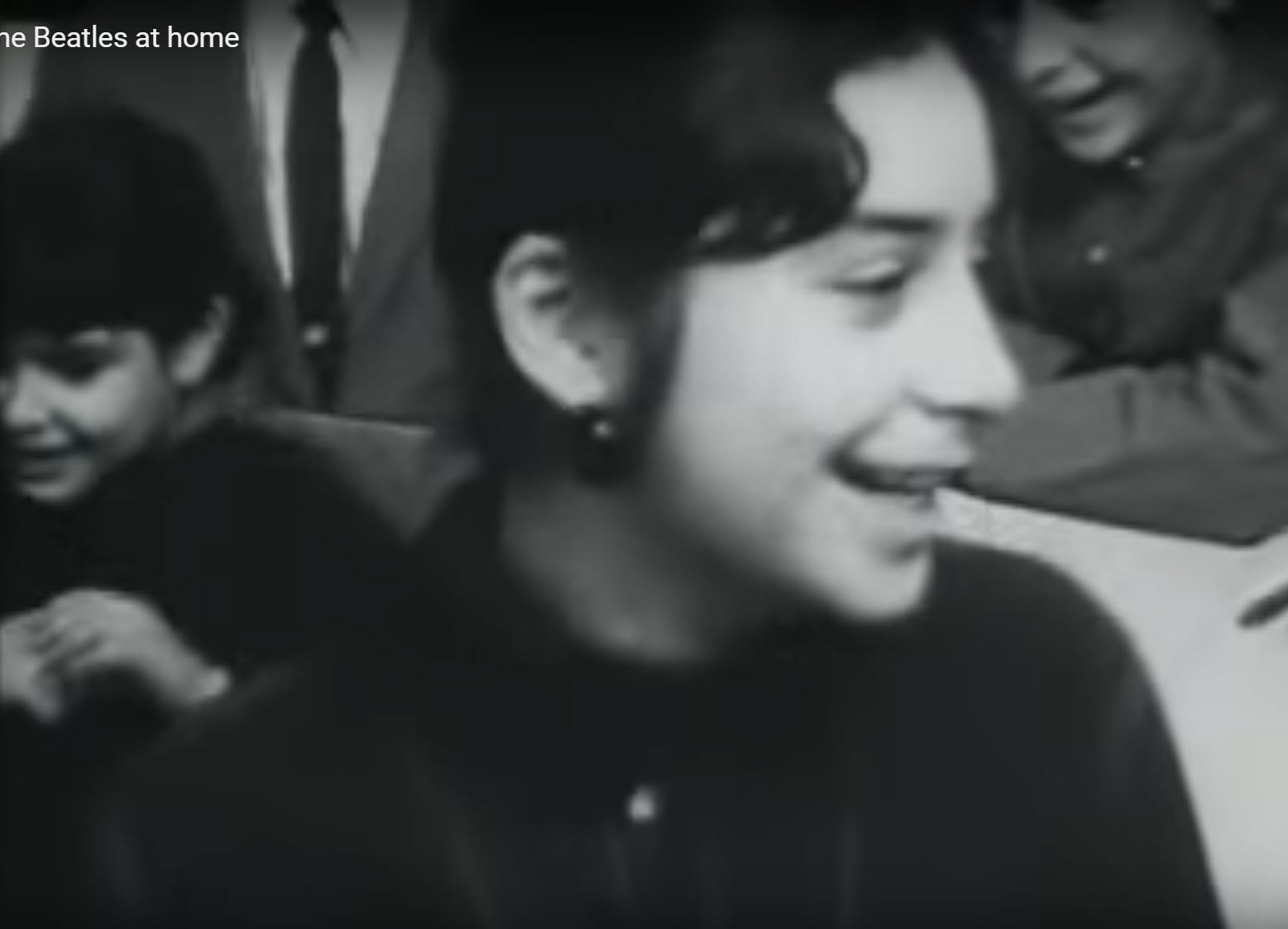 Yo readers! The various versious of the Maysles documentary of The Beatles’ first visit to the US pop up and disappear on-line. I heartily recommend tracking down the complete original. And I’d like to give a special shout out to Enid Gonzalez, featured in the clip below and a faithful subscriber to SoTW. Respect, Enid!!
And a very Merry Christmas to y’all out there.

“We got a call one day from Granada television in England. They said The Beatles were arriving in two hours in New York at Idlewild Airport. Would we like to make a film of them? I put my hand over the phone and asked my brother ‘Who are The Beatles? Are they any good?'”

Albert (1926-2015) and David (1931-1987) Maysles had been making documentary films for four years when they got that call. They had eschewed their conventional careers in psychology and Hollywood studio work to work in the new American style of “direct cinema” – a shoulder-held camera built by Albert, natural lighting, recording the natural unfolding of real events, akin to the French  cinéma vérité. 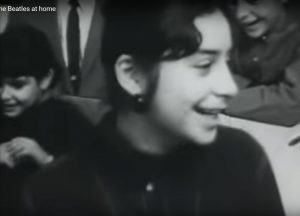 The Maysles made the 81-minute film, “What’s Happening! The Beatles in the U.S.A,” accompanying the lads from their disembarkment from the plane, through their entire first visit to the US, including the Ed Sullivan Show, travelling by train to Washington, D.C.  for a live show, and then by train again to Miami Beach for another Sullivan gig. Much of the film takes place in The Beatles’ hotel rooms, cars and trains.

I probably know more about The Beatles than either of my next-door neighbors. I first saw “Hard Day’s Night” only a month after its release (and then at a 10 AM weekday showing), because I wasn’t willing to subject myself to all those screaming girls in the theater. I wanted to hear the lads under pristine conditions. I’ve seen Richard Lester’s film dozens of times over the last half century, and still think it’s really groovy. The Fab Four with all the concomitant excitement and hysteria. 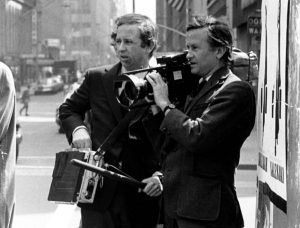 I don’t know why I wasn’t aware back then of the Maysles film. I was even aware of the Maysles when I was studying film in the late 60s, having seen their documentary of the Stones’ ill-fated Altamont concert, “Gimme Shelter,” including live footage (in color) of Hell’s Angels murdering a fan directly in front of the stage. (The Angel was acquitted on grounds of self-defence, the Maysles’ film showing that the attackee was brandishing a pistol.)

But somehow the Maysles’ Beatles film never received the attention it deserved. Until very recently, I was unaware of it in any of its incarnations. Nor, as it turned out, were any of my aging hippie Beatles friends, fans, freaks and fanatics. 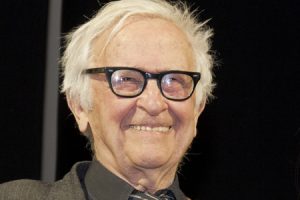 The film was an unnoticed revolution and a revelation – an intimate, candid, relaxed, jolly, amazing portrait of Beatlemania and its authors.

As far as I’m able to piece things together, the Maysles released the 88-minute 16mm version of “What’s Happening! The Beatles in the U.S.A” in 1964.  It’s virtually unavailable today, reportedly shown on occasion at festivals.

In 1991, Albert (David died in 1987) re-edited a 91-minute version, called “The Beatles: The First U.S. Visit”. It added 22 minutes of their appearances on the Ed Sullivan Show, but excluded 20 much more interesting minutes of the original version. Some of that is available on-line, such as this 6-minute clip of the lads fooling around in their hotel room and joking with astounded passengers on the train. 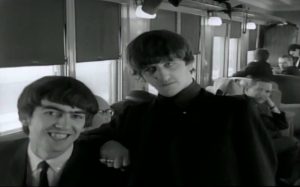 To make matters more complicated, there’s a 51-minute-long “The Beatles: The Making of the First U.S. Visit – Maysles Brothers Documentary” which I of course found even more riveting than the film itself (the 1991 version).

And to make matters even more complicateder, there’s an 80-minute version of the material with Albert Maysles’ voice-over commentary.

My recommendation? If you’re a casual fan, find the 1991 movie fast. If you’re one of us, watch the Making Of.

If you think American media circa 1964 was creaky, the BBC was the barely living incarnation of stodginess.  The Beatles had been coached by Brian Epstein to behave like well-trained monkeys for the press. The Maysles film shows one such an embarrassing photo shoot in the park. 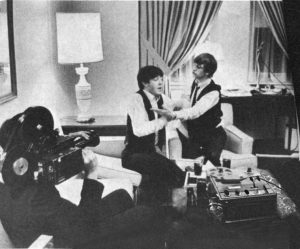 But for JohnPaulGeorgeRingo, the Maysles weren’t Them – they were these two cool young underground filmmakers. In 1964, John Lennon was 24 years old, David Maysles was 33. The film shows the boys thoroughly enjoying hanging out with the film crew, absolutely comfortable and candid with them, as Beatlemania rages everywhere outside their room.

You see everything. The lads joking with each other, joking with the Maysles. Them against the world. Brian and the crew trying to manage the unimaginable unmanageable. The horrific, embarrassing Murray the K foisting himself upon the Beatles. Murray, in a phone interview with them live on the air: “We got one more week of this, then I’m gonna become the fifth Beatle, okay baby?” 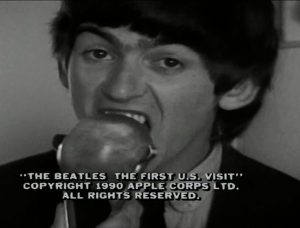 Paul (to the lads, covering the mouthpiece of the phone): “Does anybody understand him?”

And you see the boys taking a keen interest in the film-making process. Think about it – they’re crazy talented, successful 24-year olds. Of course they’re interested in learning how a film is made. They’d soon be doing it themselves (albeit with limited success).

Maysles tells how no one knew if there would be five or 5000 people at the airport, that the Granada reps on the plane wanted standard archaic Auntie Beeb-style interviews. “We’d rather get information that is spontaneous, people experiencing something.” 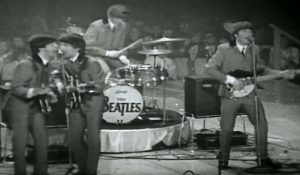 You see the amazement on The Beatles’ faces as they step off the plane. I mean, this is America.

You see them at their charming, most insouciant best fielding imbecilic questions from the American press:

And then Paul carefully reading the transcript of the press conference in the paper, commenting in retrospect on each of the questions and answers. But he doesn’t come across as calculating or manipulative. He’s overwhelmed. He’s as surprised by it all as we are.

You see all the lads with the Pepsi Cola transistor radios glued to their ears, listening to ‘I Want to Hold Your Hand’ and ‘Twist and Shout’. Paul, “Oh, I like this America.” You see Ringo climbing onto the dance floor at the Peppermint Lounge – from the dance floor itself, the camera bumping and grinding and hitchhiking and frugging and whatever, girls throwing themselves at him.

You see John in the hotel room playing a series descending chords on a melodica – which would three years later become the chord sequence and sound of “Living is easy with eyes closed”. If you’re me, that penetrates to a very deep spot.

You see girls stalking their room in the hallways and boys dressed up as a adults trying to crash into the hotel. You see the boys get a phone call from Col. Tom Parker. You see George doing an imitation of Dylan singing a talking blues. You see Ringo, in total earnest, saying “I hope we’ll be coming back to America”. 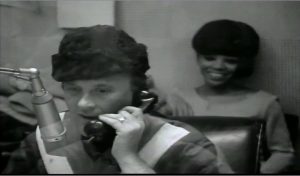 The Maysles are brilliant filmmakers. In one early scene, Murray the creepy, sleazy K is talking to the lads on the phone while Marvin Gaye’s ‘Pride and Joy’ is playing in the background. But the Maysles keep the camera on this very, very sexy black chick hanging out in the waiting room on the far side of the glass partition. You see a 30 second shot(!) of Murray out of focus in the foreground, with her moving (in focus) to Marvin Gaye in the background, with the implicit message of ‘There’s a giant pile of hype here driven by Murray’s ego; but there’s also tremendous, real, palpable excitement’.  Then they cut to an extreme close-up of a gaggle 14-year old girls shouting “We want The Beatles, we want The Beatles, , we want The Beatles”. Exactly what they mean by that I’ll leave implicit, a gesture to the more gentile among our readers. 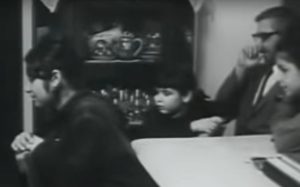 I’m tempted to say that The Beatles brought sex to the 1960s.

The pièce de résistance of the Maysles’ footage stars Enid and Eva Gonzalez.

You see the Maysles accompanying The Beatles to the CBS studios that Sunday night for their first American appearance. But they’ve been told that only union technicians are allowed on-stage. You see Paul try to get them in the stage door, to no avail.

Maysles: “Murray the K told us, ‘If you just walk down the street, go into the first tenement building, somewhere along the corridor there’d be a family watching The Beatles on television.’ So when we heard through one of the doors The Beatles’ music, we knocked, the mother came to answer it. We explained to her that we were making a film of The Beatles, could we film her family watching them, she said ‘Come on in.’” American, 1964, two and a half months after the Kennedy assassination. The Family watching The TV. The Father in his tie. The Boyfriend sulking in the background. The Little Sister’s eyes following her older sisters as intently as a baby python or a tiger cub or a Bird of Paradise chick watches its mother to see just how to stalk the prey, how to dance the dance. You see the light flicker on in that 5-year old head, and you see the girl smile that “what only-women-know” smile.

But most of all you see Enid and Eva transfixed – undulating and squirming and squealing, far more intimate and sexually revealing than any home video by Paris Hilton or Kim Kardashian.

The Maysles are brilliant filmmakers, flies on the wall at a fascinating, memorable moment. I’m sorry I missed their film back then and all along. So I’d just like to now grant them a much-belated Meshel Prize for their eloquent, revealing storytelling of a story most near and dear to my heart.

Tags: BeatlesEnid and Eva GonzalezMayslesThe Beatles: The First U.S. VisitWhat's Happening! The Beatles in the U.S.A