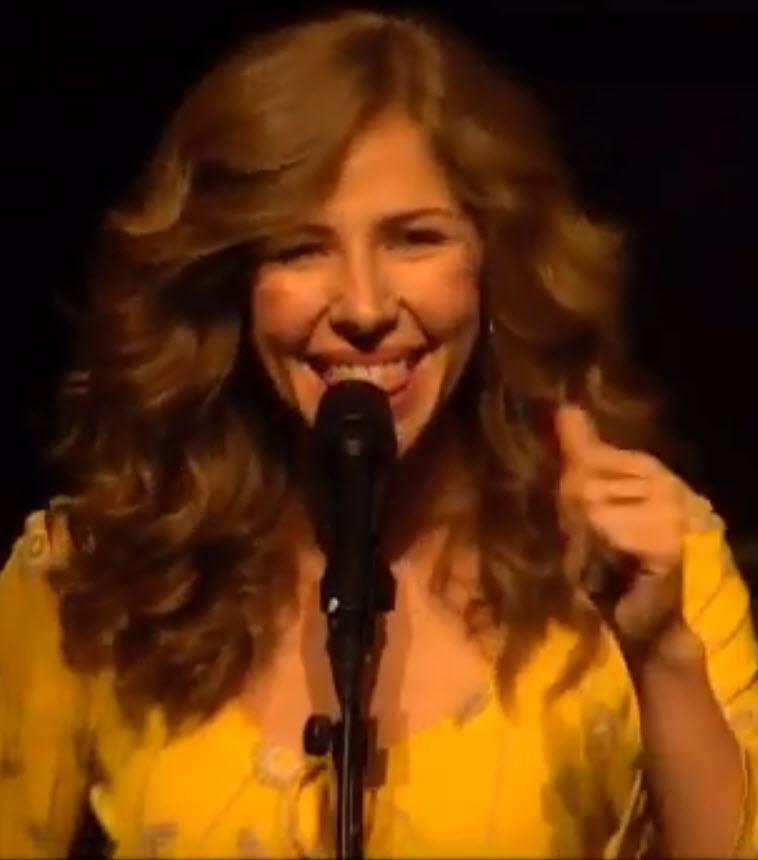 Rachael Price, ‘They All Laughed’  (the whole song) 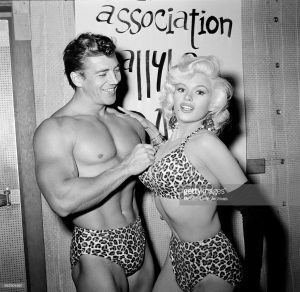 But I’ve matured. I no longer want to be a DJ on a Hit Parade station. I want to have a late-night slot on a very hip FM station, where I can wear shades (sunglasses) On Air and pick songs not by teeny-bopper sales (or by the $ of the distributor’s gift to the DJ) but by my very meandering rivulet of semi-consciousness.

So I’m going to fulfill my little fantasy this week, and present you with my personal Top Ten of the past fortnight or so, the best of the music that tracked its dirty little feet across my virtual turntable. In ascending order, just like at WSAI, to keep suspense at its peak. 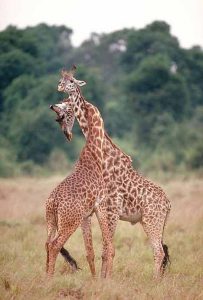 [If you click on the What’s New tab on this page, you’ll see a chronological list of all SoTWs]

Yes, we dedicated SoTW 270 to this very cut, and SoTW 271 to a wider sampling of bootleg covers by Laura. I’ve been binge-ing on her bootlegs, and you’ll probably be hearing more about this inspiring music. But for a month now, I just can’t get enough of this thrilling, chilling treatment of a superb song I had previously not appreciated sufficiently.

I’ve listened to BS’s version of ‘Stoney End’ a couple more times, trying to figure out why that was a hit instead of Laura’s original, but to no avail. The world is not a fair place. I wrote a posting a long time ago (SoTW 20) about why I admired Barbra Streisand until she became famous at the age of 22, and never since. I listened to the “Stoney End” album. It’s not embarrassing, just a waste of vinyl. Or bytes or whatever. Barbra trying to be hip. She should just be Barbra. 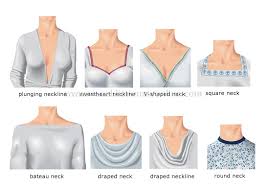 But I did trip over this little gem—Randy Newman’s stunning ‘I Think It’s Going to Rain Today’, recorded for the “Stoney End” album (1971), released only in 2012 on her “Release Me” CD. It’s just Streisand with Randy accompanying her on piano. It doesn’t have a single electron of the sincerity of the original, from Randy’s masterpiece first album, which had its own posting in SoTW 85. But still. The girl’s got pipes.

While we’re on the subject of chanteuses shouting, I happened to hear the original version of Burt Bacharach/Hal David’s ‘Alfie’, by Cilla Black, orchestrated and conducted by Burt himself. Coincidentally, this song also had its own dedicated SoTW 220.

There’s a great clip of that session, mucho recommended. And here’s the two of them reflecting back on that recording session years later.

Cilla Black (nee Cilla White) was born in Liverpool (1943), a pal of The Beatles, managed by Brian Epstein. They gave her ‘Love of the Loved’, ‘It’s For You’, and ‘Step Inside Love’. Like many non-Brits, I was surprised to learn that Cilla became a major media ikon in the UK, hosting her own TV variety shows and whatnot. You might enjoy the rather charming and unpretentious TV biopic, “Cilla”. 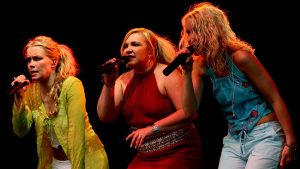 Flowing along the ‘women singing strongly’ stream, Värttinä is a Finnish world music band that’s been around for 30 years. They started out as a youth group collective, and have morphed into a successful group with floating membership, which “revived the unique polyphonic music of the Finno-Ugric people of Karelia”, eschewing ‘the long-accepted cultural notion that women should sing unaccompanied’. Oh, those Finns!

Come on, give it a chance!. No dedicated SoTW to these gals (yet), but we have explored the Finnishish band Folk‘Avant in SoTW 264, Nordic Roots music in general in SoTW 71 about Lyy, and their cousins The Bulgarian State Radio and Television Women’s Choir (Le Mystere des Voix Bulgares) – SoTW 30. 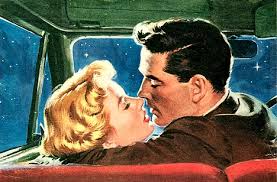 Scandinavian singers. And in two weeks, Maestro Peder Karlsson is coming to our shores, so you know who I’m going to be listening to: the young The Real Group. Here they are in a favorite of mine, written by Neil Hefti for Count Basie’s seminal album “Atomic Basie”. Here’s SoTW 168 on ‘Girl Talk’, another great song by Hefti. And here’s SoTW 101, featuring Kurt Elling’s version of ‘Li’l Darling’.

The Real Group in its young days made a lot of pretty perfect music. I’ve written about them a lot, including SoTW 59 ‘Joy Spring’ and SoTW 209 ‘Waltz for Debby’.

The human voice. The only instrument created by God. You listen to the young The Real Group, and you know He really knew what He was doing. 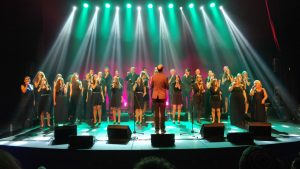 Well, that’s easy. The Real Group inspired the entire genre of Modern A Cappella, of which I’m a proud devotee. Four years ago, together with my partner and buddy Ron Gang, I formed Vocalocity, a 40-voice rock choir/power vocal ensemble. I’ve written about us in SoTW 207.

One of the many aspects of the group that I’m very proud of is that we sing pretty much only scores that were custom-written for us by the greatest arrangers of this genre in the world. We also get a big kick out of commissioning foreigners, especially them Nords, to revisit classic Israeli rock-pop standards.

The song is from 1982, when Israelis were feeling isolated and threatened militarily, politically, economically. Young people would take off for Nueiba for a few days, an oasis in the Sinai desert on the shore of the Gulf of Aqaba. It was an ultimate escape, an isolated, idyllic getaway from all the world’s stress (the first 8 bars of Line’s arrangement). I was there in 1971, the week before my wedding. Sand, sea, surf, quiet, peace. Unspoiled, peaceful, natural beauty (all the rest of the song). 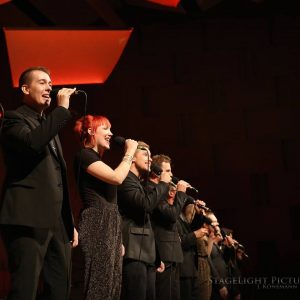 Paddling along the a cappella stream, Jesper Holm is a great conductor of Modern A Cappella. We in Israel just brought him to teach a group of conductors as part of a course given by the Royal Academy of Music from Alborg/Aarhus, the only institution in the world (I believe) to offer a degree in conducting this music. His group, Touché, is the closest I’ve heard to vocal perfection. You hear a cut and say, ‘Okay, they gave it a face-lift in the studio’. But I’ve heard them live, twice. They’re perfect live on stage as well.

‘But Beautiful’ was written by Jimmy Van Heusen and Johnny Burke for Bing Crosby to sing to Dorothy Lamour in the movie ‘The Road to Rio’ in 1947. I think Jimmy and Johnny would be pretty darned pleased to hear what Jesper and Touché have done with it.

If you want to know what’s new in music, listen to what Jacob has done in the last two months. Here’s a new live performance of his treatment of the Michael Jackson song. I think it’s pretty great.

I’ve sung Jacob’s praises in SoTW 236 and will probably continue to do so in the future. He’s been working with a singer I admire, Becca Stevens (I had the opportunity to ask her all my geeky questions.) Here’s their brand new clip together. They seem to be having a lot of fun.

I have some reservations. He’s an overwhelming genius, everyone agrees. But he has yet to touch my heart. Is he freakishly talented, but merely a millennial with a digital personality? Or is he being expressive, just in a language I don’t perceive, let alone understand? Ah, Jeff, why spoil the party? 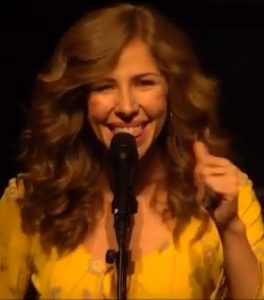 #2 Rachael Price, ‘They All Laughed’

Guesting on Chris Thile’s “Prairie Home Companion” (PBS) just two weeks ago. On the site you can find links to a whole bunch of really outstanding videos which I recommend highly.

Chris Thile is a great musician (see SoTW 131), and I saw a side of him I hadn’t seen before on clips here such as ‘Calvin and the Ghosties’ and Your Lone Journey / Hell Among the Yearlings , by Chris and Rachael and an all-star band. This (and a bunch of other clips from the show) are knockout music.

But it’s Ms Price who steals the show with the Gershwins’ standard ‘They All Laughed’. By all rights, this should be #1, but I wrote about Ms Price in collaboration with Vilray in my very last posting, SoTW 272, and previously about her band Lake Street Dive (SoTW 206), and you gotta give someone else a break with the headline.

She does the Peggy Lee ‘I Love the Way You’re Breaking My Heart’ and Simon’s ‘American Tune’.

But it’s ‘They All Laughed’ that’s been keeping me awake at night. I’d like to tell you what Rachael Price does to me when she does that thing with her shoulders and her hands on “Ooh-ooh-ooh, who’s got the last laugh now?”—it’s like… it’s like… Well, there might be kids reading this, so I’m not going to write it.

Isn’t the suspense killing you? Drum roll, fanfare, and– 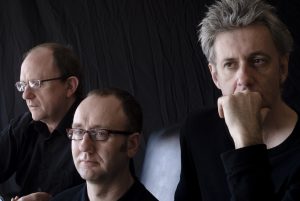 Some of my friends and I have been listening to The Necks pretty much non-stop for the last few weeks. They’re an Australian jazz-rock minimalist piano trio that’s produced about 20 distinguished but indistinguishable albums over the past 20 years.

Most of the albums, like “Sex”, contain one single hour-long cut droning along timelessly on only two chords, or even one, with miniscule changes. It’s hypnotic, it’s a trip. I really enjoyed writing SoTW 86 about Steve Reich and Minimalism, because I learned an awful lot doing the research. One needs music like this. Intelligent entertainment. I need music all the time. But you can’t listen to ‘Visions of Johanna’ or ‘Crescent’ when you’re just waking up, or when you’re trying to fall asleep. Or when you’re trying to concentrate. Yeah, sometimes The Real World raises its ugly little head and demands the focus of our attention. Like Work, or Wife, or just mental Weariness. But I still need music. And The Necks are so darned useful for sharp, convincing, meaty background music.

All of The Necks’ albums sound pretty much alike (and I’ve been listening to all 20, over and over). Full disclosure: I chose “Sex” just to catch your eye, because I’m pleased to promulgate obscure music which deserves to be heard. I admit, they’re not the most inspiring music I’ve ever heard, but one can’t be inspired all the time.

They keep me going. But when I’ve caught my breath, I keep going back to #2, Rachel (‘Ooh-ooh-ooh, who’s got the last laugh now?’) Price. She takes my breath away. She tries harder.

November 3, 2017 by jeff A Cappella Jazz Nordic Other Rock Song Of the week 7