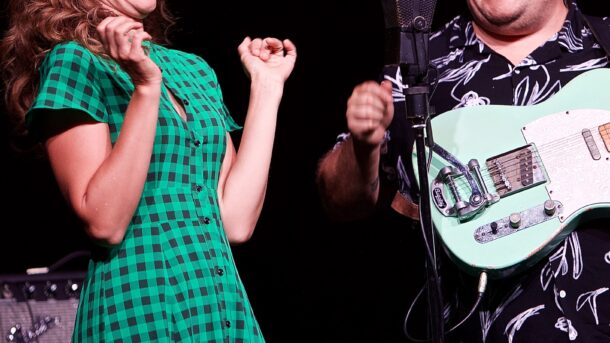 Vilray and Rachael Price, ‘Do Friends Fall in Love’

I’m a member of that dwindling species, the heterosexual male. I was raised (by a professional feminist) before the sexual revolution. I’ve never had the opportunity to really explore Mars (though I’ve looked at a lot of very beautiful pictures of Venus). I’ve never consciously cultivated my female aspect, painted my nails, or willingly ordered a “nice salad”.

I’m simply not wired to sense the attractiveness of males. I get that young Marlon Brando in a tight t-shirt can turn a head or two. But James Dean? I never wanted to cuddle or coddle him.

The female of the species—that’s another story. Take for example, Rachael Price, singer of the fine group Lake Street Dive, whose praises I have previously sung in somewhat hyperbolic terms. What can I say? She makes me a more than a little dizzy. She is, according to all five of my humble male senses, the epitome of what a woman can/should be. A chanteuse, a siren. A visage that demands my testostironical attention, a call of the wild to the fundaments of my DNA.

So when I see her dueting with this guy Vilray, whose abdomen – how can I put this delicately? – looks more like a 40-pound bag of melting ice than a frosty 6-pack – I’m struck by the incongruity.  Not just struck. Floored. Astounded. And filled with hope.

Because physically, Vilray reminds me of myself in junior high. More girth than glam, more Bud than bod, more stagger than swagger. And here he is, harmonizing right up close with that most divine Ms Price.

I’ve been told a million times that for the female of the species, the brain is an erogenous zone. I guess I believe it, in theory. But in practice, my mind can only believe that women are as shallow and superficial as us guys.

Vilray – in the strictly Chippendale sense (we’ll get to his fingers in a moment) – is a 5. Being generous, because I really admire the guy. Rachael Price is easily a 17 out of 10. Seeing her harmonize intimately with him is for me a miracle of nature: the zaftig guy winning the hand (that’s a euphemistic synecdoche, folks) of the fairest of damsels.

Vilray, I’m telling you right here and now: You are my hero, the representative, the proxy of every male who has bewailed his less than Graecian physique and overcome. Go for it!

But Vilray is not just a symbol. He’s a flesh and blood young artist, a prodigiously talented one. And if there’s a guy from our sub-species who deserves to get the girl and sell a lot of records, it’s him

Vilray, born and raised in NYC, got his biggest exposure when he was filmed busking with bassist Damon Hankoff at the Metropolitan Lorimer station of the G train. The song is Frank Loesser’s ‘(I’d Like to Get You) On a Slow Boat to China’, originally recorded by Peggy Lee and Bing Crosby in 1948. You can hear Vilray’s warm, Sinatra-esque vocal, his 30s swing guitar picking, and his virtuoso whistling. But that’s just the tip of the aforementioned bag of ice.

Vilray is a man out of time, an anachronism. He is of the 30s, Tin Pan Alley and (fortunately) was somehow time-tunneled several generations forward. He sings and writes pre-war (that’s WWII for you kids) songs, wears flamingo-hued jackets, sports a pencil moustache, and uses vintage gear “for the warmth”.

Check this out, Vilray’s ‘So This Is Love’, originally sung by Ilene Woods for the Disney film “Cinderella”.

“I do what I can to be both original and evocative of the earlier time but you can only write what comes. I have been steeped in this music since I was 16 so it’s very instinctual now.”
I know, Vil, I know. At 16 I was collecting stamps and reading Sports Illustrated. At 16 Rachael Price was being taken to the drive-in by guys who looked like Brad Pitt.

“Fats Waller is a particular touchstone for me. I play two tunes which I wrote for him to sing, ‘She Calls Me MacLeish’ and ‘Go On Shining’. The first is the kind of joke tune that he sometimes sings, ‘Pent Up In A Penthouse’ or ‘What’s Your Name’. The other one is one of his spacey mysterious songs like ‘Inside This Heart of Mine’ or Jitterbug Waltz. My approach to writing is usually to write for a singer or band from that 1925-1944 period of recording. That’s what the writers were doing then.”

If you skimmed the quote from Vilray above, let me reiterate: He writes songs for Fats (d. 1945!) to sing. That’s my kind of guy.

I readily admit that Tin Pan Alley/pre-war swing aren’t my areas of expertise. So I’m listening to Vilray’s ouvre, boning up to write this, cramming as it were. Who are his predecessors? I get that the guitar is emanating from an earlier era, but I can’t put my finger on just who played that way.

Listening to new music, asking myself questions. Like I’ve done several trillion times in my life. Then I remembered Facebook. So I shot Vilray a note, late at night for me, late afternoon for him. And he responded. Hence ensued a short but fruitful Q&A chat, with the artist himself supplying the very information I’m interested in hearing. I think that’s the coolest thing in the world.

I once heard Jacob Collier say that he was fortunate to be of a generation which offered the tools for him to make whatever music/video was in his mind In His Room at the age of 18 (and what music it was!), then press a button and export it to the world (and become an internationally-recognized genius within months). Others would say that it’s this generation that’s fortunate to have a Jacob Collier to explore the potential that this digital revolution offers.

In any case, the next time I’m tempted to bitch about the internet’s effect on the way we don’t communicate, I’ll try to remember that I can sometimes engage an artist in real time. Amazing.

Anyway, Vilray told me that Les Paul was a major influence. I know Les invented the multitrack mixer all by himself. I wasn’t aware that he invented the solid-body electric guitar and a whole bunch of other doodangles. And he’s a remarkable guitarist, a remarkable musician, as you can see here, with his charming and talented wife Mary Ford. Les Paul is only person to be included in both the Rock and Roll Hall of Fame and the National Inventors Hall of Fame. I’m sure going to be listening to some more of him.

But of course Vilray isn’t just influenced by Fats Waller and Les Paul. He’s a throwback to that era (and Ms Price looks very happy to be joining him on that hayride), but he’s an original. He’s clever and suave and prodigiously talented.

“We share one 1930s Amperite ribbon microphone like the one Sinatra sang into when he was getting started and I use a Premier 76 tube amplifier from the 1950s (bought through Retrofret Vintage Guitars). Nothing sounds as warm and comforting as this old stuff.”

Vilray says that dim lights, both in concert and in his apartment, are part of the warm, vacuum-tube parlor-concert atmosphere he’s creating. I tried that line a couple of times. Luckily for us, when Vilray tries it on Rachael, it works.

Vilray looks and sounds like another time, but he is in fact a seriously creative young artist who right now deserves to be listened to and supported. He’s funny and sharp, a super singing stylist with a great voice, knockout chops on the guitar, and a wow-level whistler to boot. He’s got an interesting website, and lots of fine clips on YouTube and Bandcamp. I signed up on Patreon to help him record. Nu, for a few bucks you too can be a big shot patron of the arts.

A 1930s microphone, a real-time Q&A session, writing songs for a long-gone legend to sing, turning down the lights with Rachael Price. You gotta love this guy. So he’s not Brad Pitt. Who among us real people is? He really does deserve our respect, our attention, our money, and the hand and heart of that most amazing young lady. That’s the way the universe should work.