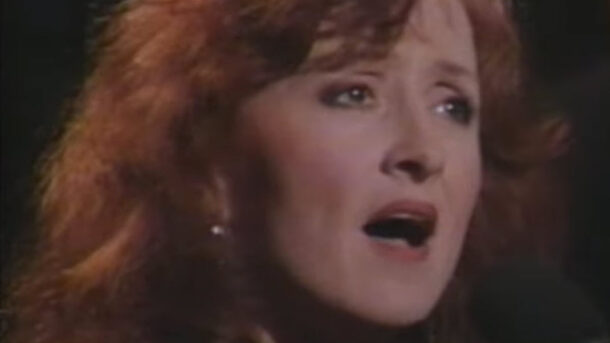 Bonnie Raitt, ‘I Can’t Make You Love Me’

Those Special Pop Songs, that’s what Maslow’s Hierarchy of Needs is missing. They should have been right up there with food, water and a comfortable pillow.

Sometimes a mere musical phrase married to a few simple words can grab your soul and take you on an express elevator to transcendence. You know what I’m talking about. When we’re exalting, when we’re devastated, so often it’s a pop song that gives voice to exactly what we’re feeling. How often at moments of emotional extremes have the lyric and the music and the arrangement and the interpretation of some scratchy 45 combined to tell us The True Meaning of what we’re feeling? It refines for us our falling in love or our breakup, encapsulates it, defines it, makes emotional sense of it better than our sister, our therapist or our own selves.

Bonnie Raitt’s ”I Can’t Make You Love Me” is one of Those Special Pop Songs. It was a hit (#18 on Billboard’s Top 100) when it was released in 1991, helping catapult Ms Raitt into commercial stardom. Over the years it has grown into a pop standard—Grammy Hall of Fame, lots of GOAT lists. Prince and George Michael and Carrie Underwood have all had a go at it.  In the last decade, ICMYLM has been covered by hundreds of singers.

Adele introduces it thus: “This is one of my favorite songs ever. It makes me really really happy and really really devastated and depressed at the same time. I do love this song. It’s just fucking stunning.”

And Bonnie herself: ‘I Can’t Make You Love Me’ is no picnic. I love that song, so does the audience. So it’s almost a sacred moment when you share that, that depth of pain with your audience. Because they get really quiet, and I have to summon … some other place in order to honor that space.”

Her live performance of the song at the 1992 Grammies is legendary. Look at what comes over her as the music fades. It’s a paragon of a performance–she inhabits the song. That’s Bruce (‘The Way It Is’) Hornsby on piano, whom Raitt describes as “Bill Evans meets the hymnal.”

Bonnie Raitt’s career is too long and rich for me to tackle here. Let’s just say you should be aware that her father John starred in the Broadway productions of Carousel, Oklahoma!, Annie Get Your Gun and The Pajama Game.

‘I Can’t Make You Love Me’ was written by the professional Nashville-oriented songwriting team of Mike Reid and Allen Shamblin. Reid was an NFL All-Pro Defensive Tackle –i.e., very very large and very very strong. In this interview, he says he got the idea for the song from a newspaper article about a guy who shot up his wife’s car as she was leaving him. When the judge asked him what he had learned from the experience, the guy answered, “You can’t make a woman love you if she don’t.”

The song is about a woman who finally accepts that her man’s heart has gone cold, but she needs just one more night for closure. Instead of lying to herself or trying to work things out, she confronts the reality with that final night together. In the morning, she’ll be on her way.

Producer Don Was: “We knew this was a great song; we had Bruce Hornsby in there playing piano with her. But when she connected to this thing, I don’t even know how to describe it. But I guess it’s like someone hooking you up to an electrical current; it was a physical experience to sit there and listen to it as it was going down there in the studio. And it was incredibly emotional. The only thing we ever had to change was a couple of lines where she started sobbing while she was singing. It was just an emotional thing, and she connected to the core of the song, and it was magnificent. And you can hear it today. It’s tough for me to listen to that record today and not get really emotional. And I can’t even relate to the song. It’s, like, a woman’s song. It’s not what the song is about that gets me, it’s some indescribable thing about the raw emotion in her performance.”

I’m with Don on that one. I would like to confess, though, that there’s one part of the song that I don’t really understand. I get her needing one last night with him before giving up. I’d think that that’s demeaning, humiliating, but I certainly get it. ‘I need you even though I know you don’t want me.’ Yet she sings, ‘…in these final hours I will lay down my heart and I’ll feel the power, but you won’t.’ That I don’t understand. It’s probably due to my life-long failure to fundamentally grasp the female psyche.

But you know what? That doesn’t stop me from feeling what Bonnie is feeling. Screw understanding. Screw my brain. This songs grabs my innards the way only Those Special Pop Songs can.

They’re right up there with food and water, Professor Maslow.

Turn down the lights, turn down the bed
Turn down these voices inside my head
Lay down with me, tell me no lies
Just hold me close, don’t patronize