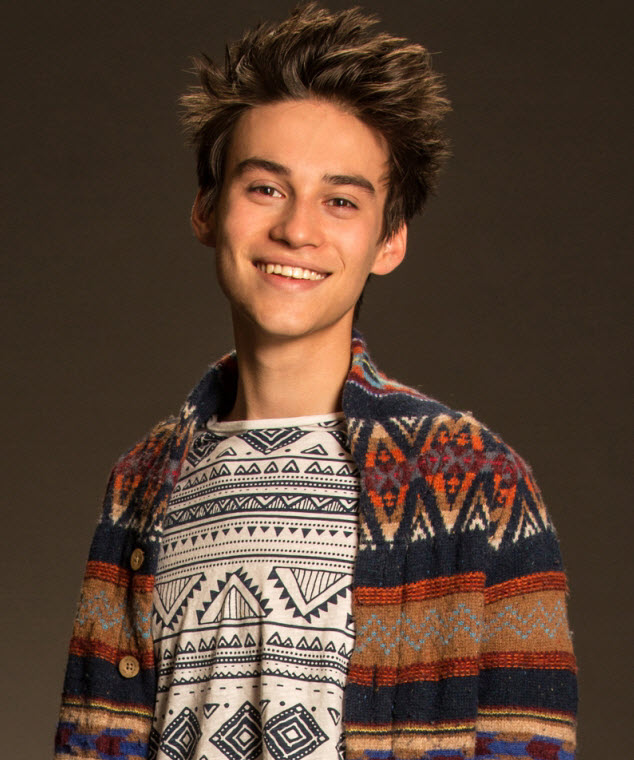 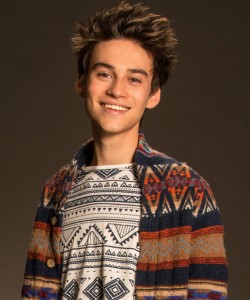 Since achieving majority, he’s been releasing videos he’s produced and recorded all by himself. In his room in his parents’ home. Alone, as it were.

At least that’s his cover story. I don’t believe a word of it. I’ve been watching his videos, and I’m convinced he’s an alien. He displays musical and visual abilities way beyond the ken of Homo sapiens from Planet Earth. It wouldn’t surprise me if he turns out to be the front man for some nefarious intergalactic conspiracy to invade our minds.

Skeptical? Watch ‘Hideaway’, the first video for his debut album “In My Room”, due July 1.

See what I mean? The superhuman, multi-octave, mind-bogglingly rich vocals? His prowess on every instrument you’ve heard of and a few he seems to have invented (a miniature acoustic bass)?  The outlandishly inventive visuals?

The humans I’ve encountered, even the musically gifted ones, can’t conceive of stuff like that, let alone execute it. By themselves. At the age of 22. Alone in their room in their parents’ house.

I remember, for example, hearing The Beatles’ ‘Rain’ and ‘Strawberry Fields Forever’ for the first time. I remember the quantum shock in my brain experienced witnessing the leap of imagination those recordings presented:
This is something new.
This is a new world of aural and conceptual possibilities.
Jacob Collier brings to mind that degree of innovation. 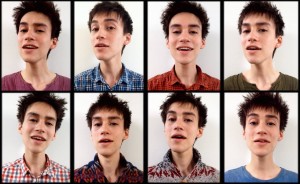 One of his favorite formats has been multitracked videos of jazz and pop standards, driven by (by his own account) Brian Wilson-inspired vocals, often a cappella but occasionally garnished with a knockout lead instrument or five. I wanna tell you, this is seriously impressive stuff.

But he’s also been venturing out into the big world, starting at the top – here he is guesting with the hottest, coolest band in the world today, Snarky Puppy:

‘QuarterMaster’, a live performance in which he solos on the melodica. Seriously.

‘Don’t You Know’, from Snarky Puppy’s new DVD/CD “Family Dinner – Volume Two” in which he plays piano and sings multi-tracked, live!!, using a device he invented with a team at MIT, the ‘harmoniser’ – a thingie that enables him to sing in chords that he’s playing on a keyboard. Huh? Did we mention that he’s 22? 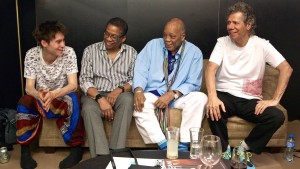 But he’s also been starting to appear live, using another home-made invention in collaboration with the MIT guys, a  one-man, multi-instrumental, multi-visual tool that allows him to simulate on stage the multi-track vocals/videos.

This is the kind of impression he’s been making on people:

“Talent oozing out of every pore”— Jamie Cullum
“Fucking unbelievable” — David Crosby
“The most talented kid on Earth today” — K.D. Lang
“Magnificent!” — Chick Corea
“Blown away” — Steve Vai
“I have never in my life seen a talent like this… Beyond category. One of my favourite young artists on the planet – absolutely mind-blowing” — Quincy Jones
“Wow!! Jacob, your stuff is amazing” — Herbie Hancock
“Staggering and unique… Jazz’s new messiah” — The Guardian 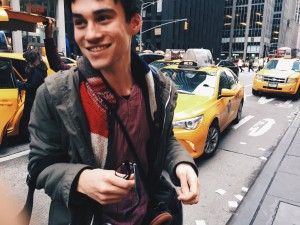 I don’t know how far he’ll go, this alien whippersnapper.

His guiding light is Brian Wilson. His new album is named after the Beach Boys’ song, ‘In My Room’. Here’s Jacob’s ruminative piano treatment of the Brian song. (For comparison, check out Paul Simon’s solo treatment of ‘Surfer Girl’).

Gary Usher, co-writer of the lyrics with Brian: “‘In My Room’ found us taking our craft a little more seriously. I played bass and Brian was on organ. The song was written in an hour… Brian’s melody all the way. The sensitivity… the concept meant a lot to him. When we finished, it was late, after our midnight curfew. In fact, Murry [the Wilson brothers’ father] came in a couple of times and wanted me to leave. Anyway, we got Audree [the Wilson brothers’ mother], who was putting her hair up before bed, and we played it for her. She said, ‘That’s the most beautiful song you’ve ever written.'” 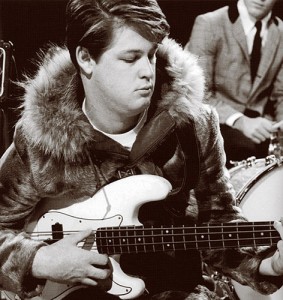 Brian: “I had a room, and I thought of it as my kingdom. And I wrote that song, very definitely, that you’re not afraid when you’re in your room. It’s absolutely true.”
Jacob echoes not only Brian’s harmonic and orchestrational genius. He also speaks of ‘his room’ as his natural environment.

One of the innumerable talents of Squire Jacob that I find profoundly unsettling is his self-assurance. He’s out there doing mind-bogglingly new and exciting stuff with folks like Quincy Jones and Herbie Hancock and Jamie Cullum, and he behaves with aplomb and confidence as if  as if he’s been selling tens of thousands of copies of this stuff for 10 years.

Let’s step for a moment into the form/content dichotomy. 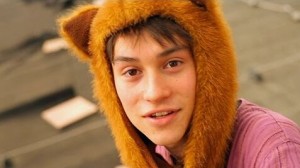 In purely musical terms, at 22 Jacob is way beyond Brian. He’s not churning out the original surfing/hot rod hits that Brian was at that age; but he is going to town harmonically in a way Brian would only begin to attempt several years and several albums later in “Beach Boys Today!” But as an innovator of sound, technique, tools? Jacob is standing on Brian’s shoulders. The Wilson brothers had a midnight curfew, and the personal computer was 30 years away. I don’t know if Brian even had a reel-to-reel machine when he wrote ‘In My Room’. Jacob really does create a new world every three or four days (that’s how long it takes him to make a multitracked ‘cube’ vocal video).

I see Jacob potentially playing in a league with Brian Wilson, even John and Paul, some day. Why maybe? At the same time that they were creating new worlds of options, they were creating indelible, lasting music. Jacob’s not doing that yet. My sense is that he’s still rather overwhelmed by the tools and techniques he’s inventing as he goes along.

‘Hideaway’ is a big step forward. It’s an original song, although I admit that I thought at first it was penned by that prolific songwriter Trad, sort of like James Taylor’s ‘That Lonesome Road’. (I don’t think I was thinking of Bing Crosby’s 1933 ‘In My Hideaway’.) After you’ve amazed your brain a few times watching the video of ‘Hideaway’, try listening to it without the carnival of lights and images and personae and invention.

The song. It’s almost as good as the video. 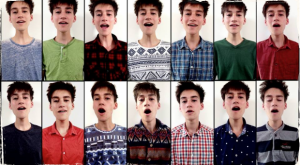 Brian Wilson’s genius goes beyond those harmonies and that orchestration. Both serve to celebrate the core, the song. As brilliant as is the whole of each of the worlds contained on the Beach Boys’ finest songs, it’s all finally in service of the song, even “Pet Sounds”, even ‘Good Vibrations’.

As a musician, Jacob Collier is still a kid, albeit a prodigiously gifted one. He’s just beginning to venture outside his room, almost literally. If he has the focus, the fiber, the soul, to concentrate on core values – melody, lyric, song structure – Jacob Collier could well be one of the major musical voices of his generation.

Here’s a fine video of Jacob explaining how and why you should consider reaching into your pocket and supporting him. Know what? I did. It makes me a patron of the arts, to kick in a little dough for a kid I have so much respect and hopes for. Think about joining me in supporting him.