A while back I visited the Princeton Record Exchange, “one of the Leading Independent Record Stores since 1980”. I picked up my usual eclectic batch of weird and exotic obscurita, including one you might have heard of, “The Isley Brothers Story, Vol. 1.” (I figured at $1.99 I couldn’t go wrong). 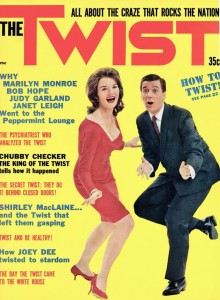 Sit down here, Virginia, and I’ll tell you a story. It’s about how before the Jerk, the Pony, the Watusi, the Mashed Potato, the Monkey and the Funky Chicken, there was the big mamma pelvic rotator of them all, The Twist. And all the kinetic energy emanating from all those gyrations powered more Twist songs than the number of ants on a Tennessee anthill. And before there was The Beatles, Virginia, there were The Isley Brothers. But we’re putting the cart before the bandwagon.

The early 1960s were a very happy time in America (except for the threat of nuclear war with the Russkis), so people danced. Mostly young people, but also some fat and balding older suburbanites. And the really hip (culturally-aware) ones danced a jig called The Twist, which is performed by squaring the feet at shoulder width, extending the arms slightly and grinding the feet grind back and forth on the floor. Sounds like fun, doesn’t it? Here’s what it looks like in American cultural mind (excuse the oxymorons, they know not what they do). 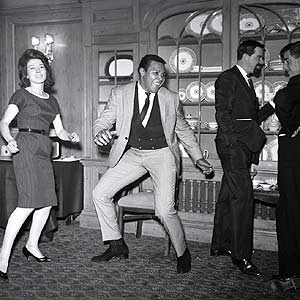 The Twist was the invention of rock and roll luminary Dick Clark. He heard the potential of the original‘The Twist’ by R&B baaadman Hank Ballard, but realized it was too gritty and raunchy for white teen audiences, so he got a local Philly label to record wholesome (read: ‘very light-skinned Negro’) Chubby Checker. His ‘original’ version of ‘The Twist’ hit  #1 on the charts twice, in 1960 and 1962, and inspired a virtual musical epidemic, including gems such as Chubby’s ‘Let’s Twist Again’, ‘Peppermint Twist’ (good old Joey Dee), ‘Twistin’ the Night Away’ (the great Sam Cooke bringing home the bread), an entire album “Bo Diddley’s A Twister”,  ‘Oliver Twist’ by Rod McKuen (I jest not), and  the big mamma of them all, The Isley Brothers’ ‘Twist and Shout’.

They say The Twist came from an American plantation slave dance called “wringin’ and twistin,” and the pelvic and shuffling foot movements can be traced all the way back to West Africa. Sure sounds to me like all the Africa’s been bleached out.

Meanwhile, back in 1956, Ronald, Rudolph and O’Kelly Isley (15, 17 and 18 respectfully) boarded a Greyhound in Cincinnati (where they’d grown up in gospel) bound for New York (read: Sodom), where they were eventually signed by RCA. They built a local fan base due to their energetic live performances. James Brown once described the Isleys entering the stage flying through ramps “like Tarzan”. 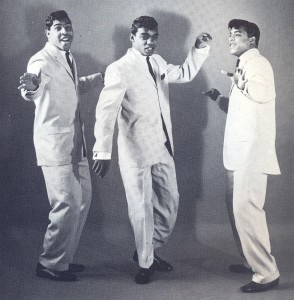 Opening for Jackie Wilson in Washington DC, they performed his ‘Lonely Teardrops’, during which they improvised the line “You know you make me want to shout” which developed into a gospel-charged call-and-response that drove the audience wild. RCA encouraged them to try it in the studio, and kept the bleach locked in the cleaning cabinet. The almost-spontaneous ‘Shout’ (1959, split into two parts for the 45 RPM), became a hit and an icon, covered by everyone from The Chipmunks to the movie “Animal House” to a laundry spray named after the song to a popular American wedding dance to the NFL Buffalo Bills to innumerable raucous Arak-sodden nights in my army reserve unit. The 4:39 of bedlam really is a wonder. It’s a shame Hamlet didn’t know the song – I’m sure it could have lifted his spirits. The organ and the guitar, by the way, are played by two guys brought especially for the session from the Isley’s church back home.

Here they are singing it live on Shindig circa 1965, the energy level hardly diminished by the years and the network lights.

Here are The Beatles singing ‘Shout’ live on TV in 1964 (they never recorded it). The sound and picture are out of synch, but they’re clearly enjoying themselves immensely. In fact, I don’t remember a clip where they look like they’re having so much fun making music. Note that all four lads share the lead vocals in turn. 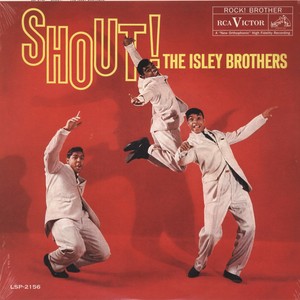 The Isley’s follow-up single, ‘Respectable’ is regrettably little known — no less gospel energetic than its predecessor, and containing the lyric “Rubbedy-dub-dub-dub, she’s never been in love” (because she’s so Respectable).

Don’t get impatient, Virginia. We’re getting to the point now.

In 1961, Atlantic Records wanted a young group named The Top Notes to record ‘Twist and Shout’, written by staff newcomer Bert Berns and Phil Medley. Jerry Wexler decided he’d produce it with the help of another newcomer, Phil Spector, a 22-year old whose portfolio already included involvement in ‘Spanish Harlem’ and ‘On Broadway’. Berns watched from the recording booth while Wexler and Spector butchered his song. Wexler: “It was horrible…Phil changed the middle around, we had the wrong tempo, the wrong feel…Afterward, Bert said, ‘Man, you fucked it up.’”

Berns wanted to give them the musical finger, so he took The Isley Brothers into the RCA studio himself. The “raucous, uninhibited, swaggering” result was released on June 16, 1962. It reached # 17 on the US pop top 40 charts, and #2 on the R&B chart.

A mere half-year later, on February 11, 1963, The Beatles went into the studio to record their first LP – 11 songs in 10 hours!  George Martin left ‘Twist and Shout’ for last. Engineer Norman Smith: “Someone suggested they do ‘Twist and Shout’ with John taking the lead vocal. But by this time all their throats were tired and sore; …John’s, in particular, was almost completely gone, so we really had to get it right the first time, The Beatles on the studio floor and us in the control room. John sucked a couple more Zubes, had a bit of a gargle with milk and away we went.” It would become The Beatles’ only million-selling cover. Here’s The Lads on the Ed Sullivan Show, and here’s the famous Royal Variety performance from 1963 before Queen Elizabeth, with John’s famous introduction: “For our last number, I’d like to ask your help. Would the people in the cheaper seats clap your hands. And the rest of you, if you’ll just rattle your jewelry.” 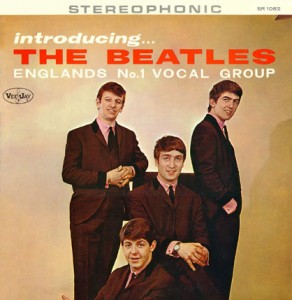 In 1964, O’Kelly Isley met a homeless young guitarist at a store, and brought him into the Isley family home. The young man, Jimi Hendrix, played on a couple of their flops, but then left to tour with Little Richard. The Isley Brothers signed with Motown and in 1966 regained the charts (#12) with the ebullient ‘This Old Heart of Mine’, written by Holland-Dozier-Holland, out-Topping the Four Tops, one of the finest cuts to come out of Berry Gordy’s factory. Did you ever catch that part of the song was recycled from The Supremes’ ‘Back in My Arms Again’? Ecologically responsible, that Berry Gordy.

You don’t need me to tell you about Rod Stewart’s cover of ‘This Old Heart of Mine’, but you might have missed his duet with Ronald Isley.

In the 1960s and early 1970s the Isley Brothers drafted three young family members into the group and reincarnated themselves in the funk mode. They continued their career into the early 2000s in a number of formats and styles. But you’ll pardon me if I get off the train in 1966.I prefer to wallow in my nostalgia; and I only bought Volume 1 of “The Isley Brothers Story.”

SoTW 28: Smokey Robinson & The Miracles, ‘The Tracks of My Tears’