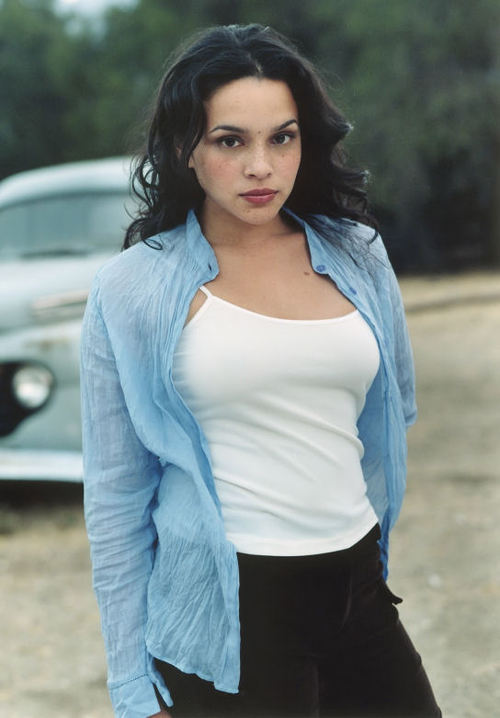 SoTW is a non-commercial venture, intended solely to promote the appreciation of good music.
Please show your support by signing up here for a single weekly notification.

We here at SoTW love getting readers’ letters. Well, usually we do. Last week we received one which we didn’t make us feel too good:

“Dear SoTW, Jeez, you know dude, you can really be a pain in the butt with all your talk and ideas and analyzing and history and shit. I mean, you know a lot of stuff and all, and it can even be a little interesting on occasion, but what happened to the music? You’re so heavy, man. Can’t you ever just kick off your shoes, lean back, and enjoy some music? And your choices? Where do you live? Don’t you get it that not everyone is into Bulgarian women’s choirs or albino Brazilian mystics or WWII contortionists? How about some NICE music for a change? Just something PLEASANT? Do you even know those words? How the hell do the people around you put up with you? Yours truly, F.Y.”

Ok, granted, F.Y. has a point or two there, although I don’t think he really needed to get that abusive or personal. But we really do take seriously what our loyal readers have to say, and F.Y. seems to be one of them. So, F. (you don’t mind if I call you that?), this week we’re going for NICE. 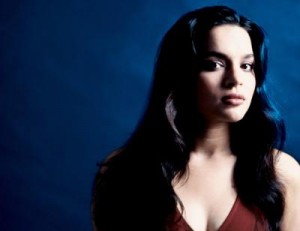 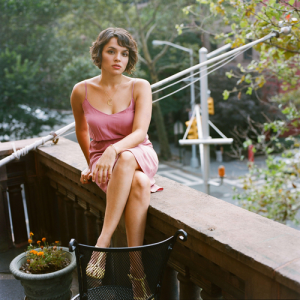 And there’s nothing NICEr than a pretty girl singing a pretty song, right? And there’s definitely no one prettier than the very lovely Miss Norah Jones (b. 1979).

Everyone says so. She’s a really big star, and justifiably so. Her first album, 2001’s “Come Away With Me” won all the Grammies in the world and remains the Blue Note label’s biggest-selling album. It includes the megahit ‘Don’t Know Why‘, as well as a whole bunch of other fine songs, and is probably the best ultrapopular and most listenable album by an intelligent female artist since Carol King’s “Tapestry”.

Young Norah often sounds familiar, a refugee of the 70s, but her style really is her own—country jazz, with a twist of blues and an ample dose of pop hooks. Ear candy that doesn’t insult the brain. Not to mention a pair of lips and a pair of eyes and a figure and an attitude that can make a man lose sleep at night. A fetching beauty with a catchy song. What more could one ask for?

Here’s a video clip of the song ‘Sunrise’. I think it’s witty and charming and she’s breathtakingly sexy. It’s from her second album, “Feels Like Home,” which was just as successful as the first. 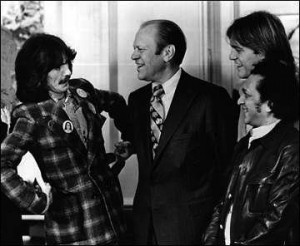 Who is this Norah Jones? Well, surprisingly, she’s not just a pretty face. For one, she was raised in Texas by her dancer/nurse/concert promoter mother, Sue, who had had a nine-year relationship with Ravi Shankar, towards the end of which Norah was born.

Ravi Shankar (b. 1920), of course, introduced classical Indian sitar music to Yehudi Menuhin, John Coltrane, George Harrison, and the rest of the Western world. He was one of the stars of the Woodstock Festival (I’m not imagining that, I saw him there). Norah was born Geethali Norah Jones Shankar (or in the original Bengali: গীথালি নরাহ জন্স শঙ্কর)). She only saw her father a few times a year until she was nine, and then not until she was 18, when he introduced her to her 16-year-old half-sister Anoushka, now a successful Shankar-trained sitar player. 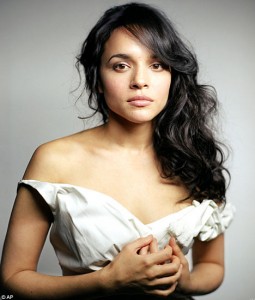 Norah plays down the father connection, but she has pursued lots of other musical directions. She recorded “The Fall” at home in 2009, a darker, more personal, laid-back album, including ‘Chasing Pirates‘. In 2010 she released ” …Featuring Norah Jones,” a collection of 18 duets she made over the years with artists such as Ray Charles, Dolly Parton, Herbie Hancock, Foo Fighters and Q-Tip. That’s one eclectic lady.

She’s even starred in a very respectable movie, “My Blueberry Nights,” directed by Wong Kar-Wai with supporting roles from Jude Law, Natalie Portman, Rachel Weisz. And with all of that, Norah Jones seems determined to avoid the pitfalls of celebrity and stardom. In spite of her incredible box office and cash register appeal, she consistently involves herself in small, personal, quality projects. Well, more power to you Norah. Not only an eclectic lady, but apparently a very spiffy and tasteful one. 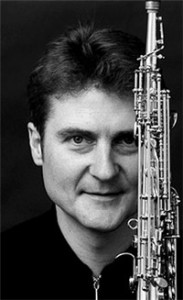 Tim Ries (b. circa 1959) is a very respectable jazz soprano saxophonist who’s studied under Michael Brecker, Dave Liebman and Bob Brookmeyer. He’s played with everyone from Steely Dan to Stevie Wonder to Paul Simon, as well as one of my very favorite musicians, Maria Schneider. He’s currently a professor of jazz at the University of Toronto. In 1999 he gigged in the horn section (and occasional keyboards) on The Rolling Stones ‘No Security tour’. After the tour, he recorded three Stones’ songs to see how they’d sound in a jazz context.  He gave the demos to Keith Richards:

I thought what Tim recorded was amazing, and I’m sort of jealous of him. When we wrote those songs, there was a lot of pressure on us to keep them as short as possible for the singles market. 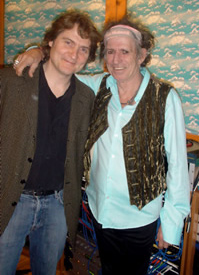 With what Tim does, he has the luxury to stretch out the melodies and play with the different chords and harmonies. Instead of the sketches that we basically recorded, Tim’s versions are more like fully finished things. The playing is beautiful too. Tim always has such a beautiful sound. 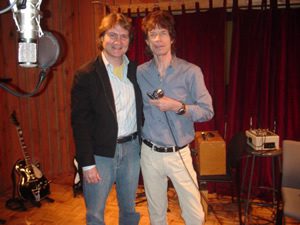 And here’s Bernard Fowler singing ‘Wild Horses’ live on a Tim Ries tour, a bit overdone for my tastes. Here’s a better clip, Tim Ries talking about the project and the recording session from the studio of a flamenco-informed ‘Jumping Jack Flash’. Fellas, if you’ve ever taken my advice about anything, watch this clip. If it doesn’t make your blood boil, you’re probably dead. And here’s Tim Ries’ recorded version of ‘Paint It Black’, and you’ll find lots more live performances from the project on YouTube. Here’s ‘Salt of the Earth’, sung in a number of languages and styles by a number of singers, one of whom is Ahinoam (Noa) Nini’s sister Odeya doing Stones in Hebrew! 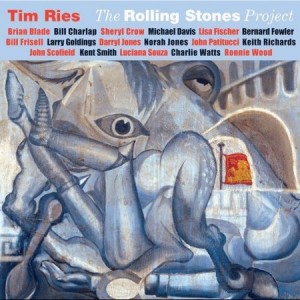 And here’s my pick of the lot, Norah Jones singing ‘Wild Horses’, backed by Bill Frisell and the whole Tim Ries crew. It’s not the best cut from Tim Ries’ Rolling Stones Project, and it’s not Norah Jones’ best cut. But it’s a really, really NICE cut, and I hope F.Y. and everyone else out there enjoys it as much as I do. So there!

Childhood living is easy to do
The things you want

ed I bought them for you
Graceless lady, you know who I am
You know I can’t let you slide through my hands
Wild horses couldn’t drag me away. 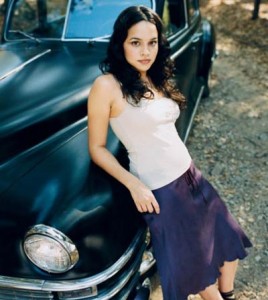 I watched you suffer a dull aching pain
Now you’ve decided to show me the same
But no sweet, vain exits or offstage lines
Could make me feel bitter or treat you unkind

Wild horses couldn’t drag me away.

I know I dreamed you a sin and a lie
I have my freedom, but I don’t have much time
Faith has been broken, tears must be cried
Let’s do some living after love dies
Wild horses couldn’t drag me away.