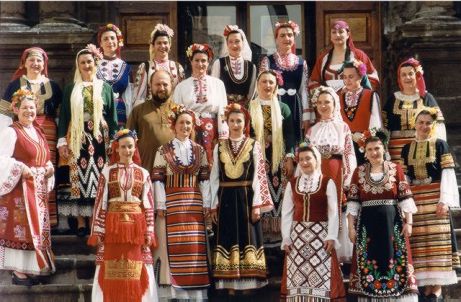 After the last 2 SoTWs, ‘Tracks of My Tears’ and “Over the Rainbow’, E.Y. wrote “What’s wrong with you, a normal song yet again?” Well, that’s an implicit challenge I can’t left unanswered, a musical gauntlet thrown at my feet.

So here you go, E.Y. and all you other unwitting readers: The Bulgarian State Television Female Vocal Choir. Seriously. I realize that may sound a bit, um, obscure, but they were a big hit in San Francisco in the 1980s, they won a Grammy in 1989 and recorded with Kate Bush. And I’ve been listening to them steadily since I discovered them a couple of years ago. C’mon, bear with me a bit.
The group has a murky history obfuscated by a muddy discography. From what we can gather, the group was formed in 1951 (right on, Bulgaria!), started recording in 1957, were discovered by a Swiss ethnomusicologist in 1975, and after Perestroika they hit the big time. 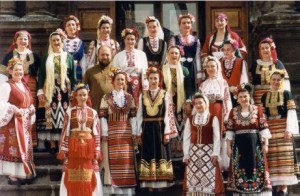 Nonetheless, they had their hour of fame in California – here’s Johnny (Carson), introducing them straight-faced, in full regalia, 1990, three songs (though I recommend you skip the third). Here’s another one of their greatest hits. And here’s a ditty I like a bit less, but the clip was made by Bulgarian TV, so it’s a real trip, maybe the most authentic piece of theirs I’ve encountered.

From Wikipedia: “Singers are chosen from country villages for the beauty and openness of their voices, and they undergo extensive training in the unique, centuries-old singing style. Influenced by Bulgaria’s Thracian, Ottoman and Byzantine history, their music is striking in its use of diaphonic singing and distinctive timbre, as well as its modal scales and dissonant harmonies (abundant second, seventh, and ninth intervals).” 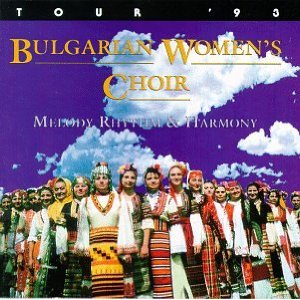 Let’s try to shed some light on that. Bulgarian folk music goes right to the roots of choral music as we know it. It predates our European tradition!! Get that? As far as I can figure it, its origins are more or less chronologically parallel to Gregorian chants—from deep in the Middle Ages. But it wasn’t affected by early polyphony; it remained duophonic long after the Europeans Renaissanced – Palestrina and Byrd and those guys. The adaptations we’re hearing, though, have lots of layers, heaps of dissonance, and a wealth of riveting textures.

Bulgaria was controlled by the Ottomans till the late 19th century. Ergo the Middle Eastern influences in the music. Rhythmically, it’s all Slavic. Today it’s bordered by Romania, Serbia, Kosova, Macedonia, Greece and Turkey. Do you know what countries it’s spitting distance from? I won’t tire you with the whole list, but it’s very long. So when Peter Gabriel (Surrey) and Paul Simon (Queens) talk about multiculturalism, sometimes I wonder just how unadulterated their ethnicity is.

Real indigenous Bulgarian folk music displays a glottal, yodeling style. The singers use throat resonance (as opposed to our Western abdominal breathing) and can hold a steady pitch for 5 minutes. But what we’re hearing today from them of course isn’t the real thing—it’s a modern hybrid of church and valley/mountain folk music, with no small dose of modern adaptation.

But it’s all women. Like the Scandinavians. Like most traditional music, for that matter. Have you ever wondered why traditional music seems to be the exclusive domain of the fair sex? I have. A Swedish folk musician told me that kulning, the musical form used to call the herds from across the valley, is a women’s genre because the menfolk, Vikings all, were out raping, pillaging, plundering, and having an all-round whopping good time. Leaving the women to develop open tone, resonant vocal techniques for calling the herds home from several hilltops away. Well, according to the comic books I read, Bulgaria didn’t have too many Vikings, but this sure is a women’s choir.

They tell me the songs aren’t deep lyrically, but as a rule they’re sadder than Western folk music. Sorry I couldn’t find the lyrics for the song I’ve included here as our SoTW, ‘Pilentze Pee’ (Pielntze Sings). But I’m sure it’s very sad.

Why, you might ask yourself (legitimately) is he telling me all this. Well, give a listen. Dunno why, but they’re a heck of a lot of fun to listen to. Just ask all my friends upon whom I’ve foisted this music. Or Kate Bush and the Grammy committee (who, I’m sure, couldn’t locate Bulgaria on a map). They sound good to ears all over the globe. Gee, almost makes you believe that we’re all brothers (and sisters), doesn’t it? Or maybe it’s just the mystery of those Bulgarian voices.