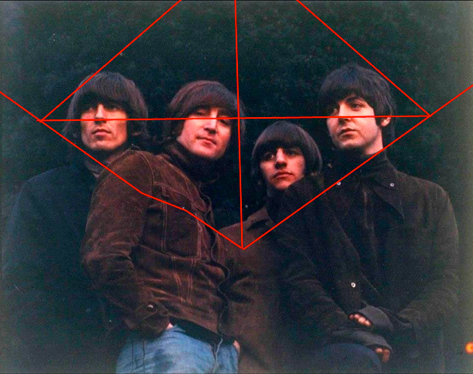 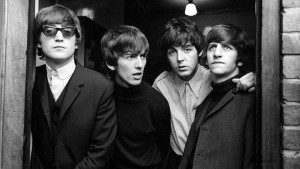 As far as I can remember (a dubious premise at best), I had no inkling on December 6, 1965 that “Rubber Soul” was being released in the US. Perhaps I’d heard that it had been released in the UK three days earlier, I don’t really remember. I do remember scouring the racks of the record store frequently, lest I miss such an auspicious event. But by early January it had reached #1, where it stayed for six weeks, prompting me to write a review for my high school newspaper. (You can see the original at the bottom here, if you must.)

I had forgotten that I was writing record reviews even before college, but an old friend sent me a hard copy of Bulldog Barks with my byline, so I guess it’s undeniable. 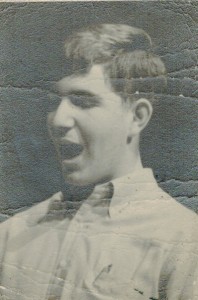 It’s a bit spooky to peek into the mind of one’s self at the age of 17 (if one can be said to have a mind at that age). But despite the occasional lapse into teenie-prose, I’m quite proud of the review. The observations are spot-on, really quite perspicacious (I’ve been waiting since a 10th grade vocabulary quiz to use that word!), especially considering the vacuum that was ‘rock journalism’ in 1965. The first edition of Rolling Stone magazine wouldn’t appear for a full two years.

So it’s me, a 17-year old music geek in Cincinnati, trying to figure out all alone just what was going on. But I did understand even back then – without the benefits of hindsight — what a seminal impact “Rubber Soul” would have on popular music, without the benefit of external resources other than what I could read on the record label and what I could deduce from thousands of listenings to the disc. This album was something wholly other:

People could (and probably have) written doctoral dissertations on each of those seismic events whose portent I am quite proud to have spotted. 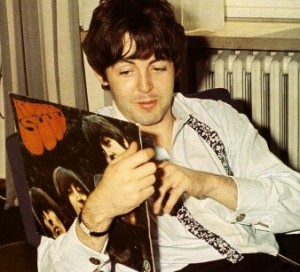 I even spoke of the ‘folksy kind of sound’ of ‘I’ve Just Seen a Face’. That was the one element I failed to plumb fully. Today I’d note that John plays an acoustic rhythm guitar on most of the cuts, with an immeasurable impact on the sound of “Rubber Soul” and on the music which would be profoundly influenced by it (i.e., everything).

‘I’ve Just Seen a Face’ was recorded in June 1965, released on the UK “Help” (August 1965), but yanked from the US version of the album. It was contemporaneous with The Byrds’ ‘Mr Tambourine Man’ (June 1965), ‘The Eve of Destruction’ (September 1965) and ‘The Sounds of Silence’ (January 1966). If we had to pick a “first” folk-rock song, perhaps it would be ‘You’ve Got to Hide Your Love Away’ (February 1965). If ‘I’ve Just Seen a Face’ wasn’t the Grand Opening of folk-rock, it was at very least the harbinger of acoustic rock. 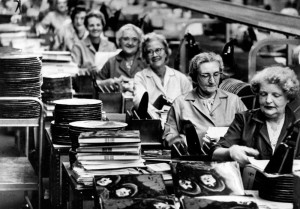 That ‘folksy’ sound is also umbilically tied to country music, which was in 1965 as far from mainstream rock as Mason was from Dixon. But George Harrison and his buddies listened to Carl Perkins almost as much as they listened to Chuck Berry. It just took a couple of years for those influences to insinuate themselves into the Beatles’ music. It started with ‘Act Naturally’ (June, 1965), which was perceived at the time (okay, by me) as a novelty one-off’er. But then came their original version of the same fingerpicking sound in ‘What Goes On’. And then came the giant step, that quantum shift we call ‘creative genius’, with ‘I’ve Just Seen a Face’. 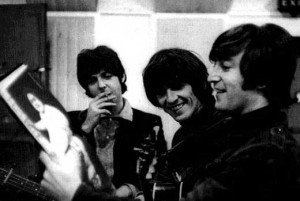 It’s got hillbilly all over it, from Ringo’s ra-ta-ta-tum brushes and John’s acoustic core, more pronounced in the Nashville harmony (Paul on top of Paul) of the refrain (“Falling, yes I am falling…”), complete with George’s Nashville Cat-informed acoustic lead guitar.

One intriguing conundrum of which I was unaware at the time was the variant UK and US versions of “Rubber Soul”, on which mountains of verbiage have been written. I’d like to toss my 2₵ on the pile of the ‘Which is Better?’ compost.

No question – the US version is much more organic stylistically than its British cousin. British LPs usually had 14 cuts, American ones only 12 (perhaps out of fear of fidelity loss due to “groove-cramming”. It wouldn’t be until “Sgt Pepper” that The Beatles would have enough artistic control over the packaging of their music to ensure that the same version of the album would be released on both sides of the pond. Here are the two versions of “Rubber Soul” – only UK in red, only US in aqua.

It seems to me that the Capitol Suits bested EMI Suits no less than they did in 1776 and 1812. ‘Drive My Car’ is a fine, quirky, biting rocker. But releasing it as a single (in the US) was a much wiser, aesthetically satisfying decision than using it to open The Beatles’ first album conceived as a coherent whole (George Martin: “Up till then we had been making albums rather like a collection of singles. Now we were really beginning to think about albums as a bit of art on their own, as entities of their own. And “Rubber Soul” was the first to emerge that way.”) 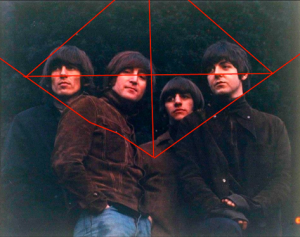 “Rubber Soul” was strongly influenced by Dylan, both by the weed he had introduced the boys to as well as the seriousness with which he related to his music. (Here’s a piece I wrote about the Dylan/Beatles symbiosis.) Seriousness means introspection. Introspection means acoustic. “Rubber Soul” is an acoustic album. ‘I’ve Just Seen a Face’ is a fitting (and wonderful) clarion call.  ‘Drive My Car’ is misplaced. Quod erat demonstrandum.

But if we’re already here, let’s beat the horse a bit. ‘Nowhere Man’ has always been a non-favorite of mine, even a bit of an embarrassment. ‘What Goes On’ is interesting only as part of the process, but is a clearly inferior cut. ‘If I Needed Someone’ is the only reject I regret. But we got in its stead ‘It’s Only Love’. John inexplicably said of it “That’s the one song I really hate of mine. Terrible lyric.” I’ve always been very fond of it. 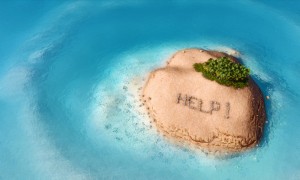 I wonder how many times I’ve listened to “Rubber Soul”. Five hundred? A thousand? Five thousand? Impossible for me to quantify that. I can certainly quality-fy it, though. There’s not a piece of music in this universe that’s dearer to me. ‘Norwegian Wood’ was a formative moment for my entire generation. As was its companion piece, ‘Girl’. Is there any song more fun than ‘You Won’t See Me’? How indelibly ingrained in my brain is the false start of ‘I’m Looking Through You’, as it appeared in the initial US pressings? Where would we be without the compass of ‘In My Life’? How different would our world have been without “Rubber Soul”?

We are who we are, to a significant degree, due to that record.

Just picture it – half a million children of the Woodstock generation on half a million little desert islands, each one clutching to his/her breast his own personal, worn, beloved copy of “Rubber Soul”.  In a sense, I think that does accurately describe the world we live in, today even more than ever. 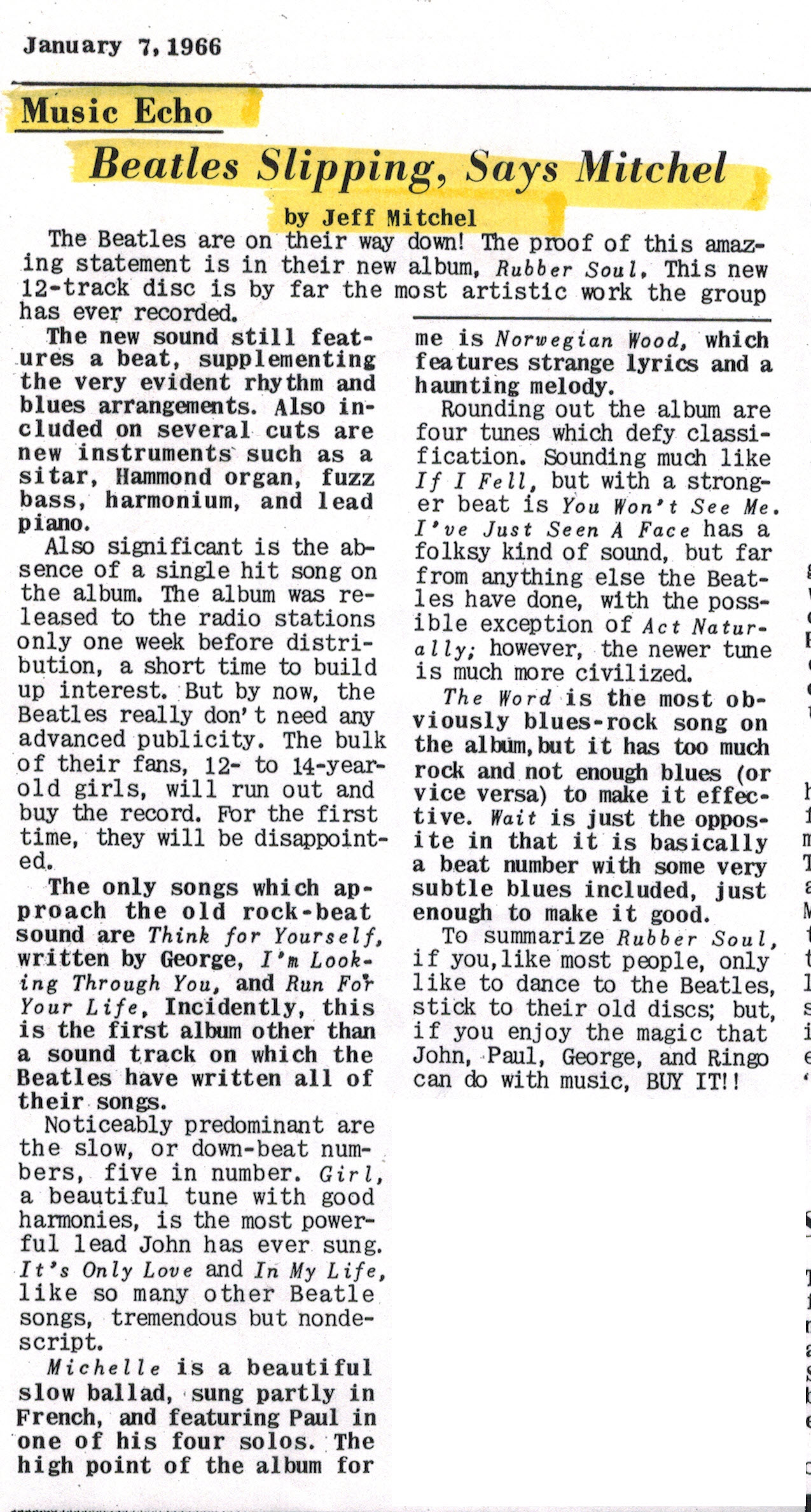