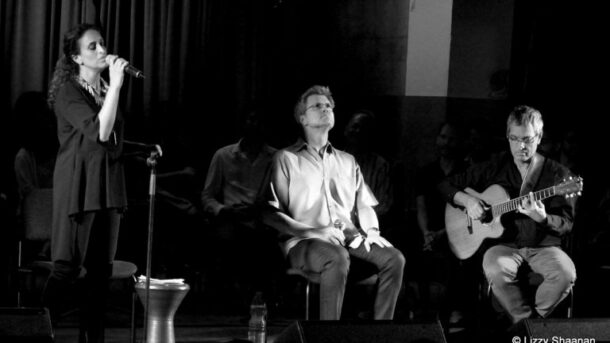 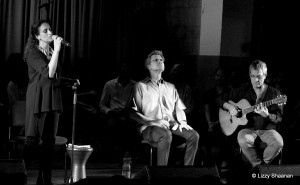 A guy can dream can’t he? A person should dream. You never know…

For many years I’ve been living inside the music I listen to. Like any other devotee suffering from arrested development, I’ve played with my little tin soldier fantasy Dream Teams, even in my dotage. What if Bill Evans and Gil Evans had collaborated?  What if Laura Nyro had followed David Geffen to Asylum Records? What if John and Paul had realized their dream of playing with Buddy Holly? I recently had the very good fortune to play Dream Team for real. 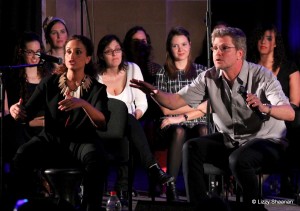 I’ve been an avid activist in the burgeoning ‘modern a cappella’ scene, especially in its European flavor, for the past ten years. The Real Group, The Swingle Singers, Rajaton, Vocal Line, even Pentatonix. I do live in and for this music, so it is with great love that I say that its form and technical sophistication has far outrun the content. There’s tons of great technique and very little creative, new, substantial music. It so often comes down to very clever, very charming, very sophisticated covers. 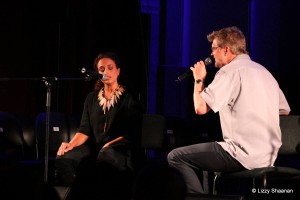 And then came “VOCAbuLarieS” under Bobby McFerrin’s name, but actually composed and scored and masterminded by Roger Treece. He coaxed motifs from Bobby’s improvisational experiments and architectured them into seven coherent compositions. Roger: “I was trying to harness the way Bobby takes ideas, sounds from all over the world and alchemizes them into a new language.”

Bobby: “I’ve never worked so closely with another writer who could create around what I do. As an improviser, everything exists only in the moment, and then you let go of it. But in this context, Roger would hear something I did once, write it down and build the material into a fully scored theme and variations form, and then say, “Here, sing this.” It was old and new, mine and not mine. It was a challenge for me.” 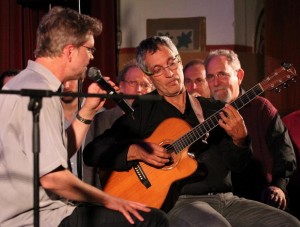 I listened to “VOCAbuLarieS” a couple of million times, and it became quite clear to me that this was the first important creation to come out of the music I love so dearly. So I jumped at the chance to have a sit-down with Roger at the AAVF a cappella festival in Aarhus, Denmark in 2013.

We talked Bible and belief, vocalisms and musical vocabularies. I told Roger that it seemed to me that VOCAbuLarieS was (among many other things) exploring the very roots of the voice and music (to which he readily agreed); but suggested that the palette could be expanded beyond the African and classical sources of his masterpiece. I raised the idea that he should come to Israel – the crossroads of three continents, the intersection of African and and North African and Mediterranean and Middle Eastern and Near Eastern cultures, a country of immigrants in which young people are conversant in 70 different musical languages. Roger is very Bible-oriented, so the idea of visiting God’s home court was greatly appealing, and he readily agreed, in principle.

I went back home to the wholly holey Holy Land and had the great fortune to form (together with my partner Ron Gang) Vocalocity, a 40-voice modern a cappella group under the musical direction of Kevin Fox (UK, The Swingle Singers), conducted by Erez Tal. 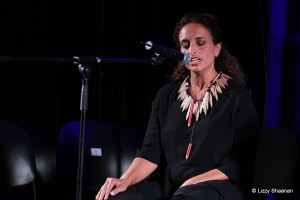 So now I have the ear of this likeminded mad genius composer/arranger and a vocal orchestra at my disposal. And I’m thinking “Israeli Vocabularies”. How to take the Treece/McF achievement a step further? What could be done to Israeli-ize the source materials? I started thinking of potential collaborators. And the name of one artist appeared as though it had been waiting inside the magic lantern to be conjured up—

Achinoam Nini, or as she’s known world-wide, Noa. Born in Israel to a Yemenite family, raised till her teens in New York, she’s a virtuoso singer defying categorization. She’s had a remarkably varied and sparkling career both in Israel and internationally for 25 years. Her music draws from the pools of American singer-songwriters to her Yemenite roots to jazz, opera, traditional Italian, and classical Israeli. Together with her long-time musical partner and collaborator Gil Dor, she’s displayed an exceptional mastery of a wide range of styles and genres in collaborations from Andrea Bocelli to Sting to Pat Metheney. She’s a warm and unpretentious person, an outspoken peace activist who provokes no little controversy in her home country for her relentless pursuit of her political agenda. A woman of the world, Made in Israel, a true musical polyglot. The formula wrote itself:
Roger + Achinoam/Gil + Vocalocity = Something New
Not just new. Achinoam’s melodic and percussive inclinations, Gil’s harmonic and structural predilections, and Roger’s unique abilities to grasp the ephemeral, to ‘architect’ the fleeting moment of the magic that can only emanate from the (almost always, but not here!) ungraspably improvised. Together they could permanentize the moment. I think of Picasso’s ‘light paintings’.

Now all that was necessary was to move this meeting of luminaries from my imagination to reality.

Roger and Vocalocity met at the Aarhus festival in May, 2015. We talked about the actuality of The Project – later to be named by Achinoam “NotesAre”, a homonym withנוצר  (‘Created’) – based on bringing him to Israel for a series of workshops, presentations and rehearsals. Roger was game from the git-go. I spoke to Achinoam (the luxury of living in a small country). She heard “VOCAbuLarieS”, said “It’s a masterpiece”, and graciously agreed to make time between her extensive touring and personal commitments for her and Gil to participate in a series of three workshops with Vocalocity and Roger. 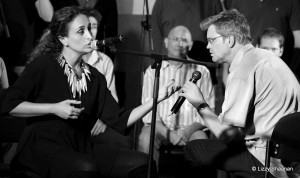 A lot of people have asked me why Achinoam and Gil agreed to participate in such an experiment (gratis—because we could never have afforded their fees). After all, they are stars with a very demanding schedule and lots of obligations.

Truth be told–they’re musicians. Dangle a juicy artistic challenge before them, they can’t resist. In these first three years of managing the virtually unfunded Vocalocity, I’ve too often said to professional musicians “I can offer you an exceptional musical opportunity, a unique instrument to play on, but unfortunately no (or very little) money.” They always listen. They’re musicians. I hope the day will come soon when we can pay people their just rewards.

So with the backing of Mil”a (the Israeli choral organization which Ron Gang heads) and the US embassy in Israel, we set a series of three workshops together in mid-November, two at the beautiful Elma hotel/music center, the third in front of an audience on the lovely stage of the YMCA, almost unadvertised for contractual reasons. But that was okay—we called it a ‘happening’, an open workshop, as opposed to a concert. It was all about the process. Real musical engagement, not a show. 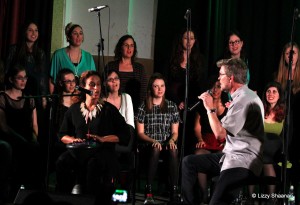 Roger sent us all a batch of ‘palettes’ to warm up our ears and voices – extended phrases in gibberish, choral chord progressions with intricate interlocking rhythms between the voices – such as Bring Us Home and Du Mac Dum. Vocalocity went over them with Roger via Skype. We sent them to Achinoam and Gil, but they were off with the Pope and Andrea Bocelli, so we figured they wouldn’t have a chance to go over the palettes before the workshops.

At our first tripartite meeting, Achinoam walked into the room carrying her palpable charisma, her warmth and a pile of papers. Greetings and hugs. What are those papers? “Well, Gil and I were listening to some of Roger’s gibberish lyrics, and some words started to coalesce. Like in “Bring Us Home”, ‘zinko zemuga’ became “Zeh po, zeh mugan (זה פה, זה מוגן)”, which in Hebrew means “It’s here, it’s protected”. 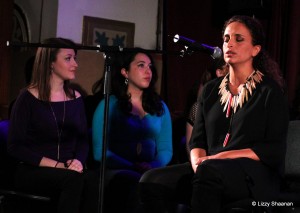 You have to remember—Israel’s a volatile place, tsuris by the barrelful, and Achinoam is a passionate, indefatigable peace activist. Words as simple as “It’s here, it’s protected” carry a tremendous valence. ‘Here’ is no generic center, it’s here in this wacky, wonderful country of Israel. ‘Protected’ is safe, secure—not from bogeymen, but from real threats. From Ayatollas with nuclear reactors, ISIS, and teenage girls carrying knives. Achinoam said that the song expressed her nostalgia for a different, a better Israel. I personally felt the words saying ‘Here, now, we have the ability to protect ourselves against adversaries’. It’s art, open to different interpretations. That I choose a different one from Achinoam is absolutely legit. In any case, we’re talking about the same subject.

So we started singing. “Zeh Po” is nine minutes long, during the course of which my dream comes true. Roger assigns a bass riff. Then adds the baritones, then each of the other voices, in interlocking phrases whose interaction bouncing off each other provide the internal combustion driving the music forward. Gil Dor is coloring it in, providing a secure harmonic underpinning. Achinoam begins to improvise, providing a linear, melodic focus to the mix. This is our first time singing “Zeh Po”. You can watch the magic, the moment of creation, right here.

Here’s the same ‘piece’ several nights later. It’s been polished just a tad, (“choreographed” is Roger’s term). At about 5’50” and again around 9’00” you can hear that wonderful, mad clockwork complex of rhythms interacting. 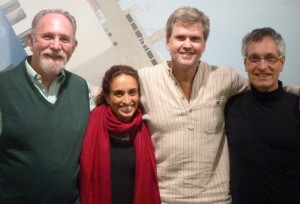 Achinoam coaxed one other distinct piece from a Roger palette. She cast a Yemenite spell on “Du Mac Dum 2”, giving us “Away You’ve Gone”. Achinoam and Gil and Roger and Vocalocity making the music I’d imagined three years earlier. I’m in heaven.

I wrote to Roger: “Well, the Achinoam/Roger/Gil amalgam worked. You can imagine how thrilling it was/is for me, especially when I learned that you’ve never really gone nose to nose with a solo voice in your weight class. I feel like I’ve helped facilitate a new kind of music being born in real time of the musical intercourse of two fine artists, each complementing the other, creating a whole neither could create alone.”

He responded more soberly: “Those two pieces are definitely working, but they’re two lines of a story that has yet to be written.”

I think we all feel that we’ve tapped a seam of gold. We put together a great virtuoso singer, the mad genius of modern choral music and a wonderful vocal orchestra. And we created Something New, something of beauty and substance, something that has never been done before, a new musical direction, one I passionately hope will continue to evolve in the future.