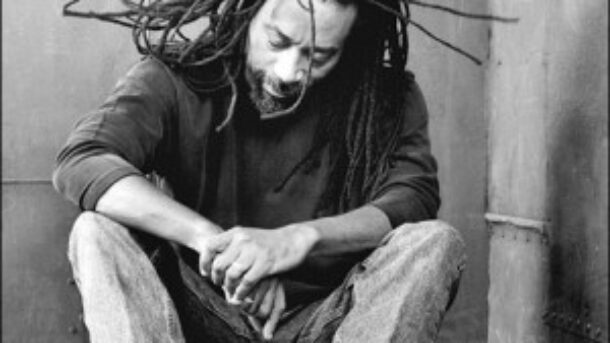 Segments of songs from “VOCAbuLarieS”, Official clip of the song “Say Ladeo” 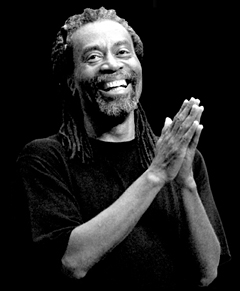 I’m probably going to step on some toes (again) this week. So I apologize in advance.

I really have no convincing defense against the charge that I’m a musical snob. Do you think it’s fun being a snob? Let me tell you, it’s not. We effete prigs get to sit in the corner and be judgmental while everyone else is having fun clapping hands and dancing. And what’s worse, is that this time I’m even stepping on my own toes.

Because Bobby McFerrin is a really nice guy. He’s neat and cool and creative and serious about his art. And about as talented in his craft as Michael Jordan and Leo DaVinci were in theirs. You know, the physical and technical and creative ability to do things that according to the laws of physics shouldn’t oughta be able to be done?

Just to get us on the same page – Bobby McFerrin (b. 1950) is hands-down the greatest vocal artist around today. Since 1982 he’s released about a dozen major CDs, focusing on a cappella vocals (both solo and multi-tracked) and collaborations, with classical cellist Yo-Yo Ma and with jazz pianist Chick Corea and others. He has the distinction of begetting not only a phrase, but also a cultural mindset with his most famous recording, ‘Don’t Worry, Be Happy’. He appears extensively as a solo artist and as a conductor/singer with many leading symphony orchestras. The guy doesn’t rest. 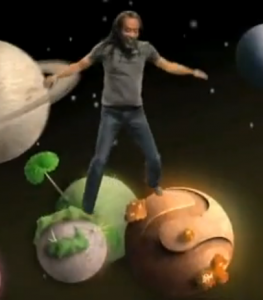 And everyone, including yours truly, is saying that his new CD, “VOCAbuLarieS“, released just a couple of weeks ago, is the CD we’ve been waiting for from him.

“VOCAbuLarieS” is seven tracks longs, a pastiche of some 1400 vocal tracks recorded by 50 singers–a tapestry of symphonic richness, much fuller than the 1997 improvised outing “Circle Songs”. It’s almost purely a cappella, with the exception of an occasional dash of soprano sax and a little support from some friendly bongos, congas, kalimbas and whatever.

The music is a dream–a snatch of lyric, a waft of melody, elusive, ephemeral, incredibly intricate and amazingly colorful and detailed, floating, free of the fetters of gravity. Like a dream, natural or chemically-induced, it is wondrous and ineffable. You wake up serene and smiling and peaceful and wowing–and then you try to tell the dream, and it dissipates, slipping through the gaps between your words.

So it is with “VOCAbuLarieS”. All seven songs are modal, and all morph from theme to theme, lilting and lovely and uplifting. The sound palette is that of the universe–McFerrin and his collaborator composer/arranger/producer Roger Treece have created a fusion of sounds drawing from South Africa (especially in “In the Garden”), Danish rhythm choirs (“Wailers”), world-mix (“He Ran to the Train”), Arvo Part neo-Gregorian (“Brief Eternity”) and Disney soundtrack (“Baby”). But all the tracks meld and slide from one world to another, and the overall effect is the space travel between them. 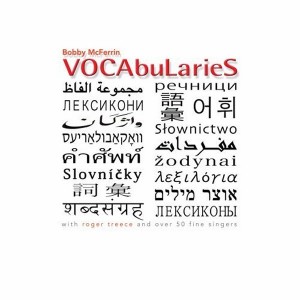 Outer space. No melody, no chord progression, no fetters. No gravity. Is being gravity-free an empirically desirable state? Isn’t ‘vapid’ a synonym for gravity-free? What about gravitas? Some grit? Some irony? Some intellectual toughness? “And there was day and there was night, And there was dark and there was light” and the melodic equivalents? Cmon! I’ll readily admit that Bobby McFerrin really is a spiritual person. But spiritual people usually make me uncomfortable.

I have some sense of the technical achievement of this CD. I’m probably the only person on my block who listens to the vocal jazz Scandinavian groups and choirs (Rajaton, The Real Group, and especially Vocal Line). That’s where I go to find rich group vocal experimentation. And “VOCAbuLarieS” has just upped the bar.

In terms of the wealth and depth of vocal textures, it’s a masterpiece. I think any sympathetic lay listener will get that, and it’s no mean accomplishment. I myself am impressed, amazed, overwhelmed.

I’ve been having some issues lately about not going to concerts. A surprising number of artists I admire have or are about to visit our fair shores–Leonard Cohen, Elvis Costello, The Swingle Singers, Chick Corea. I’m not going to any of them. The shlep and the commonality turn me off. Like I said, an unsufferable snob. I’d certainly go see Bobby McFerrin in concert, even though his CDs get relegated to background music in my playlist universe.

He does some remarkable things live. Here’s a very popular clip in which he “Demonstrates the Power of the Pentatonic Scale” to the World Science Festival. It’s fine and funny, how he non-verbally ‘explains’ to scientists how the language of music works. But here’s a clip I like much more–a spontaneous, musical audience participation improvisation. It includes a similar demonstration of the innate hardwiring of the language of the pentatonic scale, but kicks it up a level into real music. Want some more? Here’s a mock-baroque duet with the Azerbaijani singer/pianist Aziza Mustafa Zada; my guess is that this is based on a piece I don’t recognize–no humans can improvise on this level out of their heads. Here they’re scatting on Carmen.

And here’s one I like even better, one of his better-known songs, ‘I Got a Feelin”. But you have to watch it to the end. He may be spiritual, but he apparently knows the world of the flesh as well, and has a very wicked sense of humor.

But, meanwhile, back at SoTW–the song we’ve picked is the fifth cut, ‘The Garden’ (of Eden). He wrote it for his 1990 CD, “Medicine Music.” Here’s the original version. It was kicked up a few levels by in 2008 by the incredible Danish jazz choir Vocal Line, under direction of the very talented Jens Johansen.  Here they are showing their stuff in a live performance the song. It could well be that they’re backing Mr McF here. I did read that they’re going to NY to help him present “VOCAbuLarieS” in concert. Apparently there has been some cross-pollination going on between Mr McFerrin and Vocal Line. Sure wish I knew when and where and how that happened. 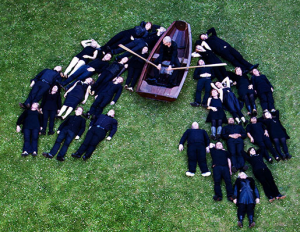 And I sure do hope that more of the very talented American luminaries interact more and more with the wonderful vocal group music that’s being made in The Northern Countries. In the meantime, we’ll enjoy the accomplishment of “VOCAbuLarieS”.

I’m sorry I didn’t have this CD to listen to back in my heady college days, when I was more in a state of head to float with it. Today, I’ll have to make due with being blown away by it, rather than moved. Well, ‘blown away’ isn’t such faint praise, is it?

He Ran to the Train