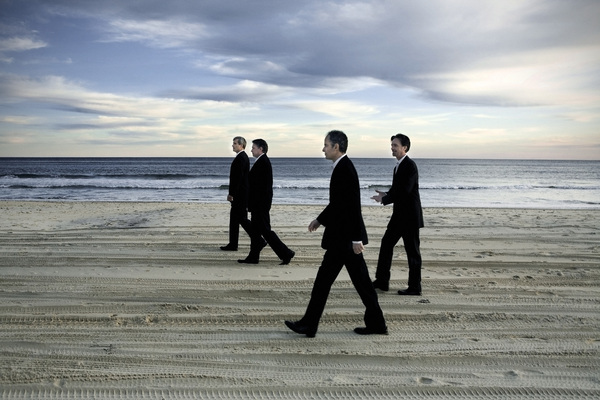 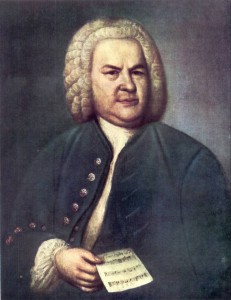 My knowledge of classical music is patchier than an Iowa quilt. But my wife still harbors delusions that I’ll grow up some day, and in her mind listening to Bach is a more dignified and mature activity than listening to The Beach Boys. A lot of people with highly-refined musical sensibilities don’t really understand Brian Wilson, but the opposite is the opposite, I believe. Anyone – even a corner-boy drug dealer from West Baltimore who takes a moment to pause and listen to “The Art of the Fugue” by Johann Sebastian Bach (1685–1750) – must grasp that he is standing before a grandeur and beauty rare in the course of our ordinary lives. Like standing on the lip of the Grand Canyon. Like gazing at the Temple Mount in Jerusalem. Like hearing your grandchild say “I love you, Poppa.” Those moments in which we transcend the traffic-jam that is our life.

Bach wrote this work during the last decade of his life, parallel to the B-minor Mass, another momentous work. But if the Mass is an exploration of how God informs and transforms the human soul, “The Art of the Fugue” is a demonstration of the counterpoint between the sublime, infinite perfection of God’s laws of nature and the workings of the human mind. 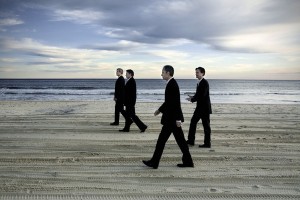 Let’s start with a couple of terms, just to get us on the same page of the score.

Fugue – a composition built on a subject and one or more ‘imitations’ (variations), which recur in opposition to each other. A fugue usually has an exposition, a development, and a recapitulation returning to the subject in the tonic key.

Counterpoint – the interaction (literally ‘point against point’) of two or more voices that are independent in contour, rhythm and harmony.

The two usually go together. In other words, you have two or more independent lines interweaving, comprising a unified whole. There’s a whole world of theory underlying this, which I wouldn’t try to explain if I could. But it’s way, way beyond my Pooh-brain’s capacity. In “The Art of the Fugue”, Bach set out to explore the extreme limits of this form. 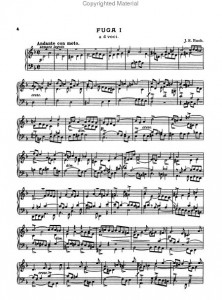 He begins with ‘simple’ fugues (believe me, that’s a technical term, not a lay description), which are actually two voices—a main theme and another completely independent line which plays against it. Then you get an inverted fugue, where Herr Bach turns the score upside down and continues playing it. But not necessarily in the same voice–he can move it up a third, or a fourth, or an eleventh, whatever he feels like on that fine Leipzig morning. That’s four lines intertwining, yes? But then he’s getting bored, so he combines the two, the original fugue together with its inversion, maybe taking one of the lines at half speed, one at double speed. And then, after a cup of coffee, he’ll write another ‘mirror’ line that can be played the same either forward or backwards.

“The governing idea of the work is an exploration in depth of the contrapuntal possibilities inherent in a single musical subject.” (Chrisoph Wolff). Each of the fugues uses this theme as its basis:

Here it is in a stripped-down harpsichord version, Contrapunctus 1.

“The Art of the Fugue” is unique in that it’s primarily a theoretical work. Bach didn’t even name it. His son-in-law attached the name “Die Kunst der Fuge” (BWV 1080). Bach didn’t even bother to orchestrate it – he failed to mention what instrument/s should play it, apparently because its performance was of secondary importance to him. Hence the many, many different settings in which it is played.

If you, like me in my weaker moments, think that various versions of a classical piece are inherently indistinguishable, try this exercise. Here are a number of versions of the same fugue. What will jump out and bite you is not only how greatly the orchestration impacts the piece, but how individual and discrete each one is from its colleagues.

For our Song of The Week, we’re presenting Contrapunctus 9, a 5, alla Duodecima. I have only the foggiest idea what that means, but it shor is pretty. We’ll start with my very favorite, the version I listen to most often, my default music for soothing my soul: 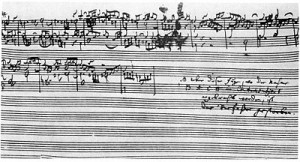 David Finckel, cellist of the Emerson Quartet: “I don’t know if there’s scientific evidence to support it, but when I listen to this music I feel my brain cells being realigned. The fugues are so complex yet so perfectly ordered, so respectful of the laws of physics that govern music and make it a universal language. Just hearing Bach’s work, even without much concentration, is like having my musical windows cleaned–all other music around me becomes clearer and more understandable.”

Bach didn’t quite finish “The Art of the Fugue”. While he was writing apparently the final fugue, based on the notes B-A-C-H (B natural), the score peters out. Bach’s son says he died while writing it. Here’s what the original looks like. Here’s what it sounds like, in Glenn Gould’s rendition:

I confess–for me, listening to Bach isn’t so different from prayer. They are both human attempts to impose an artificial order upon an inherently chaotic world.  They’re both beautiful; and, thank God, they both make a lot of sense.

Tags: Art of the FugueBachEmerson Quartet