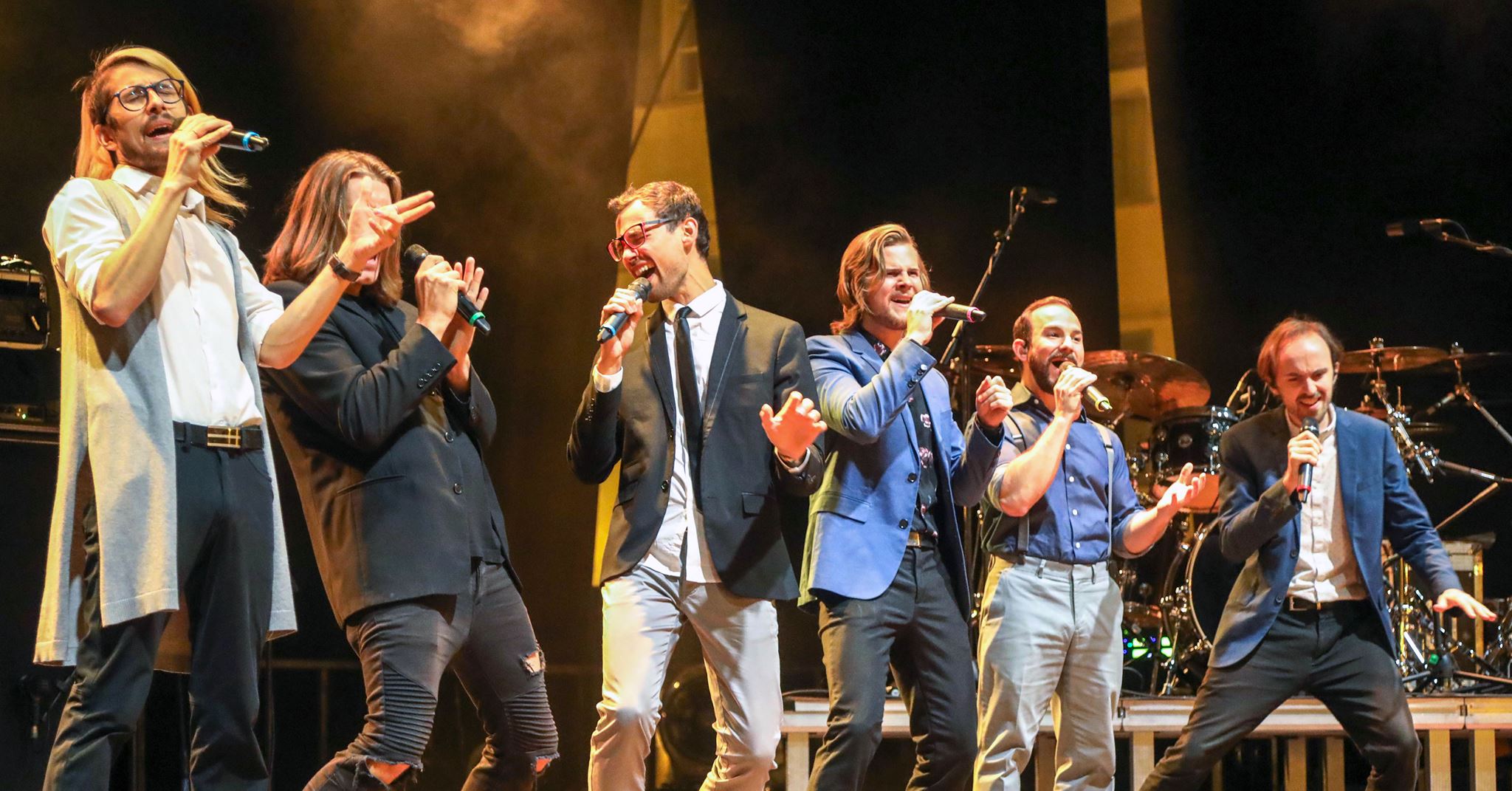 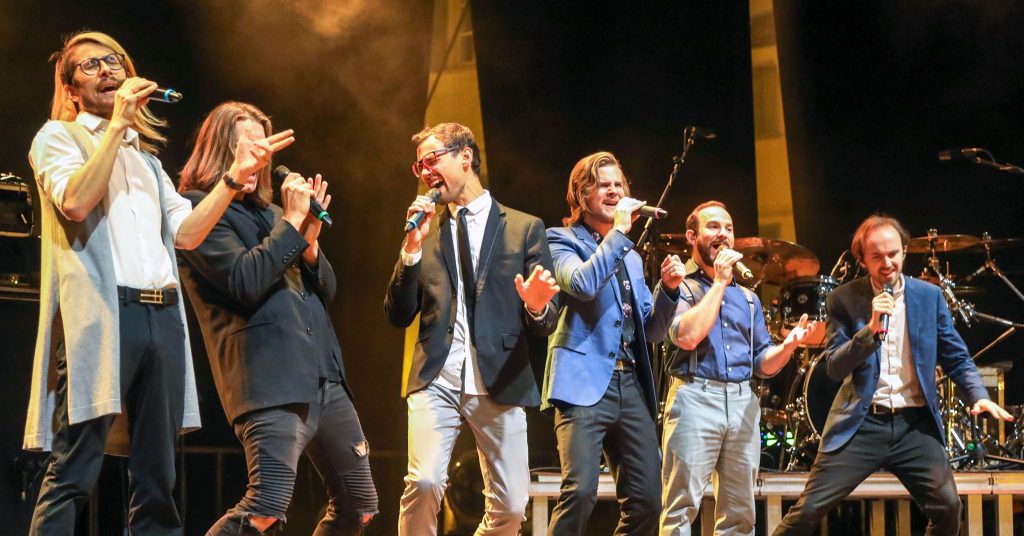 I wrote this blog post 10 months ago. All the excitement described below just begins to hint at the excitement and joy that I experienced at the Aarhus Vocal Festival, from which I’ve just returned. Same faces, same stories, but oh, so much much more. AAVF was a truly moving experience for me and for our growing cult of rabid practitioners of “modern a cappella” — virtuoso pop/jazz, voices only.

Accent — ‘With a Little Help from My Friends’ (live at Vocalmente)

Accent — ‘With a Little Help from My Friends’ (virtual version) 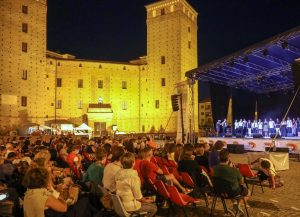 I’ve just returned [written August 2018] from Vocalmente 2018, my seventh European a cappella festival in ten years. My vacation and musical-spiritual retreat of choice. We come together, we devotees and practitioners of forward-looking close harmony vocal music, in Fossano Italy or Aarhus Denmark or Västerås Sweden or London England to hear concerts, attend lectures, participate in workshops, sing some very cool music conducted by Peder Karlsson and Merel Martens, record with Bill Hare, drink beer, and socialize. 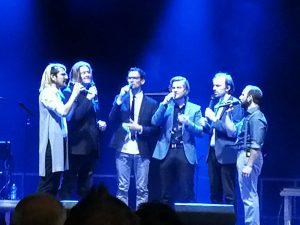 The afterparty socializing is of course the main attraction. There’s no distinction between the stars and the commonfolk, everyone hangs together, because that’s part of the ethos that defines our little cult–unaffected love of the music and each other. You meet someone who’s become an old friend over the past ten years. You meet someone you chatted with briefly a couple of times, have lunch and get close. You meet new people from exotic places like Paraguay or New Zealand or Portland.  You meet people, amateurs and professionals, who know your music from back home (in my case the rock choir Vocalocity) and whose music you have been following for years now (like the Finnish Rajaton or the Italian Cluster). 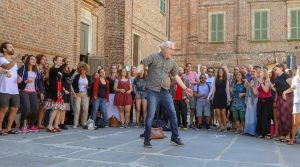 It’s a tribal gathering, members young and old drawn together by love for this thing called ‘modern a cappella’ or ‘contemporary a cappella’ or ‘rhythm choirs’ or whatever. In the five days since it ended, social media have been choked with participants’ overwhelming love, photos and videos, and post-partum depression. There was a whole world of palpable love generated there. So thanks to Erik Bosio and the whole team and warm, beautiful Fossano for a great, great job, and to Tobia Hug for starting the whole thing (and is now working on an upcoming new one).

So you’re sitting after the concert, drinking beer with some great Dane, and at the next table are sitting the six members of the rising start vocal group Accent, singing of summer in full-throated ease. Just for the fun of it. 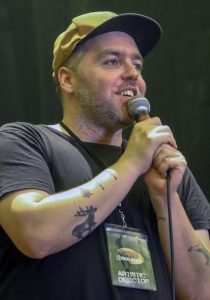 Way back in 2011, some kids met while hanging around on the street corners of the YouTube channels of old vocal jazz groups. One was from the US, two from Canada, one from the UK, one from France, one from Sweden, all musicians, all freakishly good singers. These 20somethings shared a rare love for a special kind of old close harmony music. Here’s their version of how they met.

They checked each other out, found that they were kindred spirits separated only by distance. Being millenials, they knew how to do things on the interweb that elude or mystify the rest of us analog-bred humans–like forming a vocal group without bothering to meet physically. They started by making clips like “Get Away, Jordan”, a cover of the American gospel-jazz group Take 6; or ‘Too Close for Comfort’, in the style of The Hi-Lo’s and Singers Unlimited, American vocal jazz groups of the 1950s and 1960s respectively, both led by Gene Puerling.

Remember, they had never been in the same room. It’s a new world, Suzy Creamcheese. 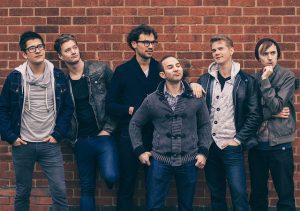 Then in 2014 they were invited to a music festival in Sweden, where they met, rehearsed, and performed their first gig. If you think we live in a post-miracle world, just watch the clip. Their first gig.

Since then, their reputation has been growing. They continue to meet at gigs, rehearsing for a few days in hotel rooms each time, currently a couple of times a year.

Accent were at Vocalmente, performing on the final night of the festival. Stars, for the meantime within our community; soon, I assume, worldwide. Because they’re so good. And cool. And cute. And fun. And they sing like six gravity-defying supermen, precise as laser surgeons, enthusiastic as eleven year-olds on a roller coaster. 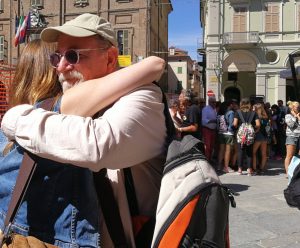 Friday night at the afterparty, I’m schmoozing with my Grammy-winning buddy Bill Hare, and they’re sitting at the next table singing. Accent, these guys we’ve all been watching for hours on YouTube, our jaws dragging on the floor, sitting at the next table, singing for fun. Then Saturday night at the afterparty, they just picked up mikes and started singing in the courtyard of the early XIVc castle for the fun of it. Because they can. For the pure joy of being young and ridiculously talented and good-looking and together with your buddies and making mind-bogglingly good music. This is how good they sounded and looked.

And this is how good their performance on stage was.

But just as much fun was watching them jumping around and whooping and hollering and leading a parade of dancing kids to the front of the stage where The Real Group are performing. 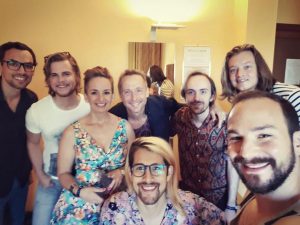 So one night Accent is dancing (in the rain) with abandon at the feet of their role models, The Real Group. And the very next night, The Real Group is gazing from the audience at these young ‘uns on stage – perhaps not jumping in the air like 25-year olds (except for Peder Karlsson, of course), but gaping speechlessly like the rest of us.

Anders Edenroth, last of the original TRG members still singing with the group, said with pride that Accent had invited him to their hotel room for their rehearsal that afternoon, “a VIP perk”. Accent said with awe that their legendary hero had graced them with his presence at their rehearsal. The passing of the torch, generation touching generation, live and in person in Fossano, Italy.

I’m still floating from the experience. I know that all my a cappella buddies who were there are still floating as well, each back in his own home territory. But we’ll keep in contact through Facebook and YouTube till next time—the Aarhus (Denmark) A Cappella Vocal Festival, AAVF, May 2019, where many of us will meet up again, hug and sing and listen to remarkable new music. And again we will generate a whole lot of unadulterated love, and feel lucky to be part of this wonderful, unique community.

Here are some more postings on related topics (for extra credit):