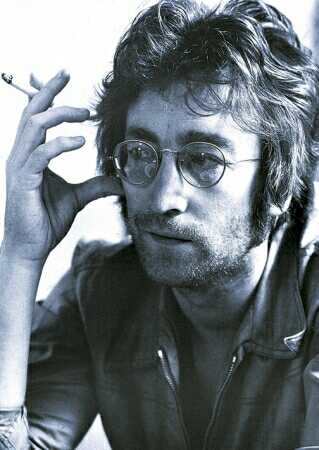 John Lennon was murdered 40 years ago today. Paul Simon wrote a song around that event. 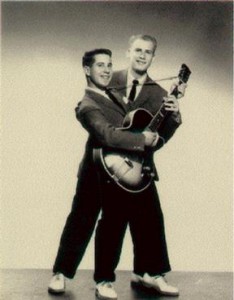 Paul Simon (b. 1941) was a nice Jewish boy from Forest Hills. At 13 he started playing and singing with his pal Art Garfunkel, and at 16 they had a small Everly Brothers-styled hit (‘Hey, Schoolgirl’) under the name Tom & Jerry. Paul and Art both went to college, but continued playing together.

They were 22 when President Kennedy was assassinated in 1963, and like all Americans, traumatized to the quick.

In 1964, when The Beatles conquered America and Bob Dylan released “Another Side Of”, they were 23 – a year younger than John, a year older than Paul, the same age as Bob. They were swept up by Beatlemania, sprouting from the same Everlies/Chuck Berry/Elvis/Buddy Holly roots. But they were even more impacted by Dylan and the folk movement, drinking from the same Woody Guthrie/Leadbelly well, not to mention doo-wop and early rhythm & blues. In short, they came from the same AM radio school. 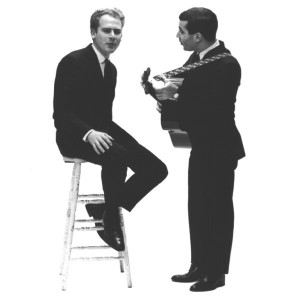 Protest Music was all the rage, and Dylan’s Columbia label signed the two young Jews to a contract (Simon claimed that after much deliberation at Columbia, it was the first time that artists had used identifiably ethnic names). They recorded an acoustic album (“Wednesday Morning 3A.M.”) that had Dylan written all over it, even in the five unoriginal originals written by Paul. Protest, Protest, Protest. Paul, like everyone else, had a hard time grasping that the recent “Another Side of Bob Dylan” had turned the page. It would take everyone a couple of years to catch on and catch up.

But the album didn’t take off. Paul went to London to be bohemian, play the folk club circuit solo, and witness The British Invasion from behind their lines. It’s important to remember how profoundly the JFK assassination impacted the American psyche. From November 22, 1963 till February 7, 1964 (The Beatles’ appearance on Ed Sullivan), the US was in a deep depression. The Fab Four were the first thing to make the American people smile in months. This mood was reflected in folk music (‘He Was a Friend of Mine’, etc) as much as it was in Beatlemania. 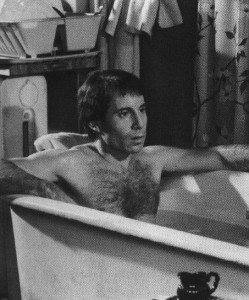 Meanwhile, back in NYC, Tom Wilson, who produced both Dylan and S&G, understood that an amalgam of rock and folk needed to be forged. He took a track called ‘The Sound of Silence’ from “Wednesday Morning”, added a bass and drums and electric guitars in the studio. The song became an anthem and together with The Byrds’ version of Dylan’s ‘Mr Tambourine Man’ more or less invented folk-rock. 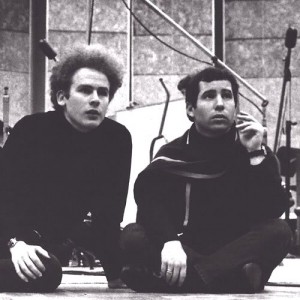 Simon & Garfunkel’s reputation is based on the mere four studio albums they went on to record. That they were early purveyors of Dylanism in a rock context is obvious. What time has obscured though is how much they were disciples of Beatle innovations. It went like this: ‘Hey, Jude’ was released in August, 1968. In addition to being a stunning song and a moving performance, it was an eye-opening, groundbreaking revolution in the evolution of what was possible in popular music. It was just about twice as long as any other #1 single, and included a 4-minute coda, a mantra that repeated and swelled and grew. It was Paul McCartney saying to the world, ‘Hi, here’s our new single, we’ve just invented this possibility.’ And The Stones and Simon and Garfunkel and everyone else would run out and try to work with what The Beatles had invented. Within a couple of months, The Stones had recorded ‘Sympathy for the Devil’, with a 2-minute fade repeating the same phrase over and over. And S&G had recorded ‘The Boxer’, also a 2-minute fade, even more in the hypnotic, swelling mode of ‘Jude’. Thus it was all those years ago, month after month, Beatles record after record. “Rubber Soul” followed by “Aftermath” and the “Sounds of Silence” LP, “Revolver” followed by “Between the Buttons” and “Parsley, Sage”, “Sgt Pepper” followed by “His Satanic Majesties’ Request” and “Bookends”.

Then The Beatles broke up, and S&G emulated even that. But while John lost his drive and direction musically, Paul Simon discovered his.

I don’t know much about the personal relationship between John Lennon and Paul Simon. I did hear one interview where Simon related a conversation he had with John: “He said to me, ‘How did you know to keep your publishing and not sign away everything’, and I said, ‘Well, we grew up in New York, but how did you know about combing your hair like that and wearing those clothes?’ He said he’d always thought he’d be a hairdresser.” 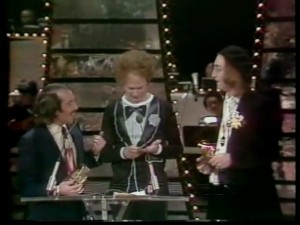 At the Grammy Awards in Los Angeles in 1975, they presented an award together. John more than anything, was an ex-Beatle. Paul and Art weren’t speaking. And host Andy Williams RIP had divorced his beautiful French wife Claudine Longet. Paul and John had clearly been being naughty boys backstage, and were visibly giddy in front of the cameras. They giggled through some inane text about breakups from partners, then opened the award envelope. Winner Olivia Newton-John (somehow beating out Elton John, Maria Muldaur and even Joni Mitchell’s ‘Help Me’!!!) was unable to make it from Down Under, but accepting in her stead, to the utter shock of all, is, um, Art Garfunkel. Ensuing is one of the intensest, embarrassingest and funniest things I’ve ever seen. The animosity between Paul and Art is palpable. From 1972–83, Paul Simon recorded a string of five sterling solo albums, the real achievement on which his reputation deserves to be judged: “Paul Simon”, “There Goes Rhymin’ Simon”, “Still Crazy After All These Years”, the vastly-underrated “One Trick Pony”, and his masterpiece, “Hearts and Bones”. “Hearts and Bones” was a commercial flop. But then again, so was “Pet Sounds”. So was “Astral Weeks”. And in my not-so-humble opinion, “Hearts and Bones” can hold its own in that very heady company. 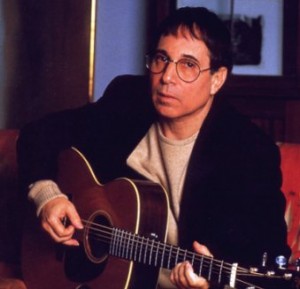 Even Simon’s subsequent “Graceland” (which I’m in a small critical minority of judging poorly) and “Rhythm of the Saints” outsold it. But I’ve never been one to care how well music does commercially. Really, it makes no impression on me whatsoever. And there are so many great songs on “Hearts and Bones”, and in Paul Simon’s string of his first five solo albums, that we’re not going to even deal with them here this week, they deserve their own day. Today we’re just going to address a single song from that album, “The Late, Great Johnny Ace.” 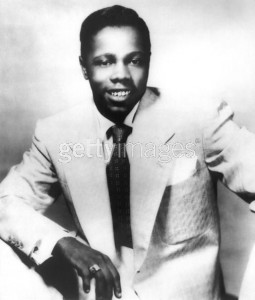 Johnny Ace (1929–1954)was a very successful rhythm & blues artist from Memphis, with a long string of hits in the early 1950s –’Pledging My Heart‘ (the first record Paul Simon ever bought), ‘Saving My Love for You,’ and ‘Never Let Me Go,’ (which was covered by such fine artists as John Martyn).

On Christmas Day, 1954, Johnny was fooling around between sets at a Houston show. Curtis Tillman, Big Mama Thornton’s bass player: “Johnny Ace had been drinking and he had this little pistol he was waving around the table and someone said ‘Be careful with that thing…’ and he said ‘It’s okay! Gun’s not loaded…see?’ and pointed it at himself with a smile on his face and ‘Bang!’ – sad, sad thing. Big Mama ran outta that dressing room yelling ‘Johnny Ace just killed hisself!”

I was reading a magazine, thinking of a rock and roll song
The year was nineteen fifty-six (sic) and I hadn’t been playing that long,
When a man came on the radio, and this is what he said,
He said “I hate to break it to his fans, but Johnny Ace is dead.”

Well, I really wasn’t such a Johnny Ace fan, but I felt bad all the same.
So I sent away for his photograph and I waited till it came.
It came all the way from Texas, with a sad and simple face
And they signed it on the bottom “From the Late Great Johnny Ace.” 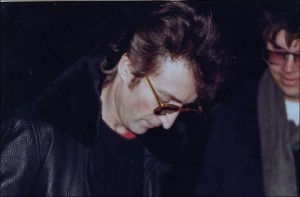 On a cold December evening I was walking through the Christmas tide
When a stranger came up and asked me if I’d heard John Lennon had died.
And the two of us went to this bar, and we stayed to close the place,
And every song we played was for the late, great Johnny Ace. 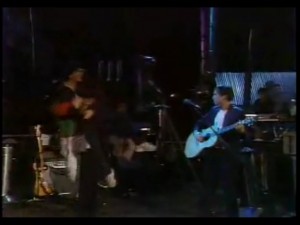 In September, 1981, Simon and Garfunkel gave a free concert in Central Park, attended by half a million people. Simon presented a brand-new song, ‘The Late, Great Johnny Ace,’ performed for the very first time. Towards the end of the song, a crazed fan rushes him onstage, saying “I just want to talk to you.” It’s hard to believe, but the scene isn’t staged.

Even today, my mind gets teary when it lights on John Lennon’s death. He appears in Paul Simon’s song only obliquely. Because the song isn’t about John Lennon, and it’s not about Johnny Ace. It’s about Paul Simon, born of a monumental artist informing a great one. So, thanks Paul, for talking about yourself so eloquently. Thanks for telling me something about myself. And John – you should know, up there in the sky with diamonds, that you shaped a large part of who I am. Me, and all of us.