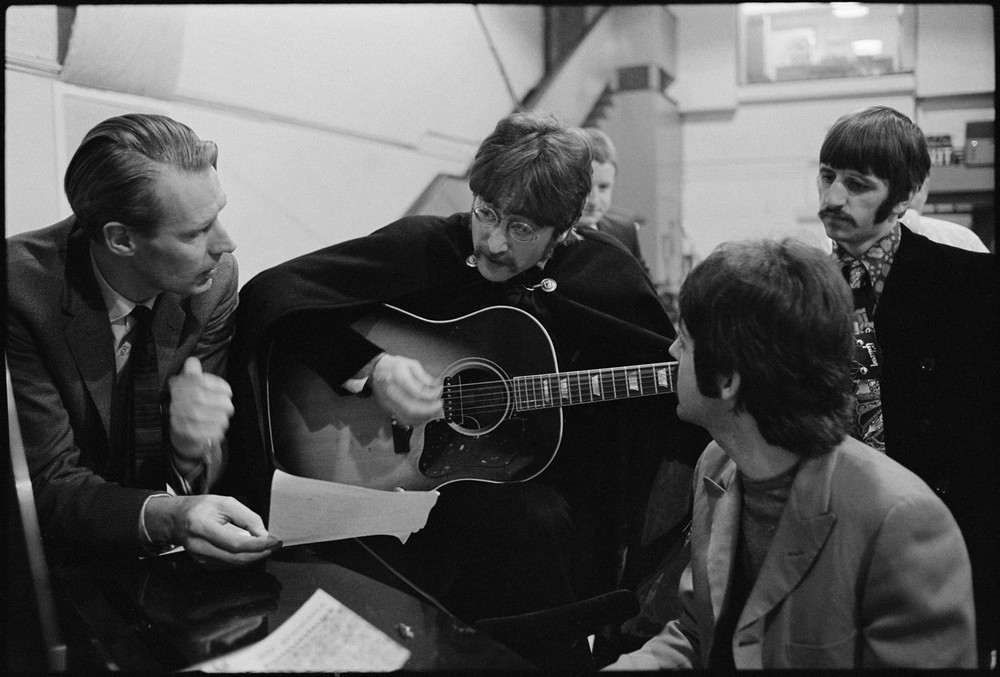 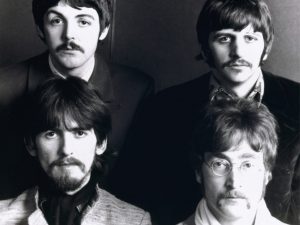 Once upon a time, and for a good many crucial years, I knew everything an American could know about The Beatles. That’s because there was so little information available.

We didn’t have Rolling Stone. We didn’t have Crawdaddy. We didn’t even have the interweb. Let us remind ourselves—“Sgt Pepper” was the first album to include printed lyrics. We had the music and the album covers, and that’s it. I listened several gazillion times to every note they recorded.  So I knew everything there was to be known—precious little, if you’re a Generation Z infoaddict. Everything that matters, if you believe that what matters most is the music. 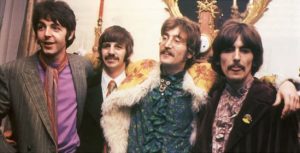 I’m not going to try to compete with all those myriads of young ‘uns who know more facts than I do about the Beatles. I’m also not going to analyze the content of ‘Strawberry Fields Forever’. My working assumption is that it’s a masterpiece. If you need convincing or affirmation of that, look elsewhere. What I am going to do is to try to provide some context for how this revolutionary recording came into being.

I’m taking the prerequisite key factor – John Lennon’s creative genius – as a given. But I do believe there are two additional crucial ingredients that are worth focusing on – the liberating impact of The Beatles’ massive success circa 1966, and the studio time afforded them.

On that day, The Beatles played their last live concert, at Candlestick Park in San Francisco. The playlist included creaky Hamburg workhorses such as ‘Rock And Roll Music’ and ‘Long Tall Sally’, but not a single song from “Revolver”, which had been recorded from April through June, and was released just a few weeks before the concert.

Up till then, The Beatles had recorded 116 songs in 46 months – 30 per year, several hours per song in the studio time that could be jammed into their schedule between touring and filming and reigning as kings of the universe.

“Rubber Soul” (December 1965) and the singles of the period had included their first cautious steps into experimentation – the fuzz bass on ‘Think For Yourself’, the sitar on ‘Norwegian Wood’, the sped-up piano break on ‘In My Life’, the backwards outro on ‘Rain’.  An indication of the schedule they worked under: ‘You Won’t See Me’ and ‘Girl’ were both done in a single day. Almost all the songs were recorded in a single day, with some overdubbing added on later. 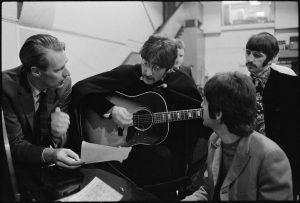 George Martin: “It became easier to do experiments because we’d had a few hits. The key was success. As we had more success, it became ‘Come on, lads’. We were more and more able to try out some far-out ideas.”
George Harrison: “You have success with what had seemed like a far-out idea, everybody says ‘Wow’, so you go back into the studio and George [Martin] was very keen, he’d say,  ‘Well what other ideas do you have?’”

Pause and reflect on that for a moment. At the height of the era of The Suits, an artist being asked ‘What other ideas do you have?’ Had anyone asked that question of Sinatra? Of Elvis? Of the Four Tops? Of Brian Wilson? All he heard was Mike Love’s “Stick to the fucking formula!” 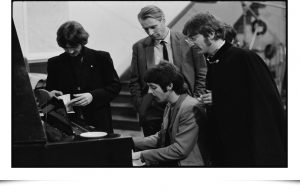 I worked as a creative artist for a decade. My next meal was never dependent on what I produced. But I assure you, every minute I spent trying to put my thoughts and words on the blank page, there were 10,000 Romans in the room demanding to be entertained, screaming for blood. I would recite to myself, “Jeff, you’re beholden to no one. You are your only audience. Ignore the world, do your best.” Very sound advice.

And then I would promptly turn and ignore it, looking over both shoulders as I typed, thinking “Aren’t I clever”, “Oh, this will tickle them—even if it’s just a little too obvious”, demeaning my integrity word after word. That’s the difference between The Beatles and the rest of the world. They transcended The Need To Please. Their god-like status liberated them. 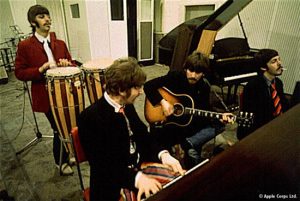 Then “Revolver” (recorded April–June, 1966) took much bolder steps, striking out in all sorts of directions, fueled by drug experimentation: ‘Taxman’, ‘I’m Only Sleeping’, ‘Yellow Submarine’, ‘Eleanor Rigby’, not to mention ‘She Said, She Said’ and ‘Tomorrow Never Knows’.  Still, only about a day and a half were allocated for the recording of each song. They had to get back on the road, which meant planes, hotel rooms, and screaming girls.

The Beatles were so sick of touring that after the Candlestick show that George Harrison said “That’s it, then. I’m not a Beatle anymore.” Brian Epstein was forced to promise them they’d stop touring. The lads got a three-month vacation. George went to India to study with Ravi Shankar. Ringo vacationed in Spain. Paul composed the soundtrack for “The Family Way”. Lennon filmed “How I Won the War” in Germany and Spain, during which time he turned 26. On that evening (the first time they escaped the punishment of recording during the daytime), The Beatles reconvened in the studio after having been apart for three months. Rested, buoyed by the success of “Revolver” (entered the charts at #1 in the UK, where it stayed for seven weeks), inspired by the drugs (marijuana and LSD), and driven by the competition (most notably Brian Wilson’s “Pet Sounds”), the lads and George Martin were at the peak of their creative energies.

George Martin: “Everything changed when they stopped touring. We could spend as much time as we wanted in the studio. That’s when things really started to go crazy.” 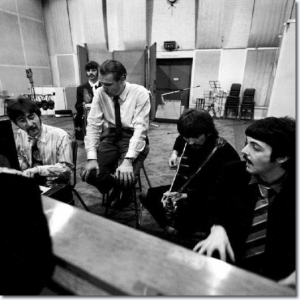 Over the next five months they would spend approximately 55 days in the studio, yielding (in order) :

According to Geoff Emerick, their regular recording engineer, they showed up with a new colourful, mustachioed Carnaby Street look, and a new attitude: 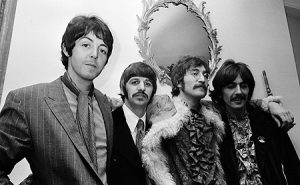 Paul: “Now we can record anything we want, and it won’t matter [that we can’t perform them live]. We want to raise the bar a notch, to make our best album ever.”

Lennon (to Martin): “What we’re saying is, if we don’t have to tour, then we can record music that we won’t ever have to play live, and that means we can create something that’s never been heard before: a new kind of record with new kinds of sounds.”

Martin: “Right then, let’s get to work. What have you got for me?”
Paul started to say something, but before he could answer, John shouted out, “I’ve got a good one, for a starter!”

John played the song. When he finished, there was a moment of stunned silence, broken by Paul, who in a quiet, respectful tone said simply, “That is absolutely brilliant.” John on accordion, Paul on trombone, George on trumpet

“The Beatles weren’t ever especially fast at working out parts…Several hours were spent deciding who was going to play what instrument.” Paul was practicing on the Mellotron, George was experimenting with his new slide guitar, playing ‘long, Hawaiian-style swoops’. Ringo was busy arranging ‘tea towels’ on top of his kit, to give it that distinctive muffled tone. The single take recorded that day was later abandoned.

Emerick on the Mellotron—“Each key triggered a tape loop of a real instrument playing the equivalent note.  There were three sets of tape loops installed, so you could have flutes, strings, or choir at the touch of a button.” It was the first time any of them had seen the instrument, and they all took turns playing around on it. “It was Paul, as usual, who discovered the musical potential instead of just the novelty value. Dialing up the flute sound, he began experimenting with the chords to John’s new song. Within a remarkably short time he’d worked out an arrangement that beautifully complemented Lennon’s haunting vocal line. 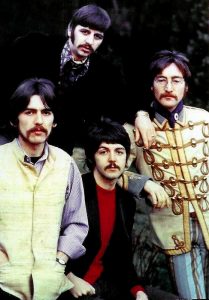 But after the weekend, Lennon announced he wanted a different sound. He and Martin started over from scratch. Here’s a nice description of that stage from George Martin, including  isolated tracks of the percussion, cello and trumpet orchestral recordings, and vocal tracks.

Three more long sessions were dedicated to recording the song, about 55 hours of studio time in total. Martin: “About 30 hours were spent recording the remake.” Emerick: “We were after perfection: it wasn’t a question of being 99 percent happy with something; we all had to be 100 percent happy with it.” John was unusually patient, perhaps due to the drugs he was taking. ‘Strawberry’ received more time and attention than even ‘Day in the Life’ and ‘I am the Walrus’.

“Lennon wanted to try recording it again with more orchestration. He and Martin decided on cello and trumpets. After Martin wrote a score for the instruments, the Beatles recorded the song again. Martin was pleased with this version, but Lennon liked the beginning of the first version and the end of the second and asked Martin to join them together. Martin pointed out that the two versions were in different tempos and different keys”, but the Beatles were accustomed to getting whatever they asked for. Remember, all they had to work with was “a pair of editing scissors, a couple of tape machines, and a varispeed control.” Emerick and Martin slowed down one of them and speeded up the other. The slower version was only a semi-tone flat compared with the faster. They combined the two versions together with a variable-control tape machine.” You can hear the splice at exactly 1:00 in the released version. 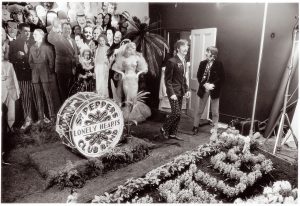 ‘Strawberry Fields Forever’ will be John’s song forever. Still, it couldn’t have happened without George Martin’s contribution. Or that of the rest of the band.

Paul’s introduction on the Mellotrom is credited by all as having a profound impact on the sound and feel of the entire recording process.

According to Emerick (who on his first day at work for EMI was taken to view a live recording session – ‘Love Me Do’!!!), whereas previous recordings had been more of a group effort, “Sgt Pepper” was much more of a Lennon and McCartney album.

Nonetheless, Harrison contributed to ‘Strawberry Fields’ the descending raga scale on the svarmandal, a harp-like Indian instrument. Every time I’m tempted to diss Mr Starkey (especially for all that damned hissing cymbal racket dirtying up so many tracks), I think of the revolutionary, muffled tom-tom sound he applied here. Levon Helm of The Band, describing their ‘Tears of Rage’— “It had the moaning tom-tom style of drumming that I’ve been credited with by some observers, but I know that Ringo Starr was doing something like it at the same time. You make the drum notes bend down in pitch. You hit it, it sounds, and then it hums as the note dies out. If the ensemble is right, you can hear the sustain like a bell, and it’s very emotional. It can keep a slow song suspended in an interesting way.”

“Sgt Pepper” marked the height of the “Paul Is Dead” craze. In case you’re still wondering, John isn’t saying “I buried Paul” at the beginning of the fade out, but rather “Cranberry sauce”.

In 1970, Lennon claimed that of all his compositions, only two qualified as honest songs: ‘Help!’ and ‘Strawberry Fields Forever’. ‘Strawberry Fields’ is a stunning song, one of his best, one of The Beatles’ best, a cultural landmark of our times. It was born of Lennon’s genius. But it was engendered by Beatlemania – the miraculous, unique, liberating status The Beatles enjoyed.