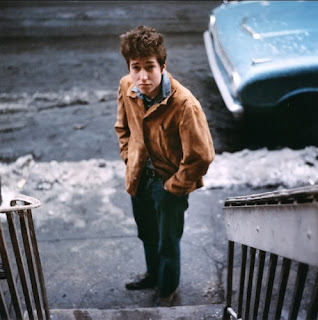 Young Bob Dylan didn’t often write gentle songs. Those addressed to a girl were usually angry, critical, upbraiding, if not down-right mean. Hate songs more than love songs. The one that pops to mind is, of course, ‘Like a Rolling Stone’, but you don’t have to think hard to come up with a whole string of them through his golden period of the mid-60s: ‘Don’t Think Twice’, the stunning ‘One Too Many Mornings’, ‘I Don’t Believe You’ (She acts like we never have met), ‘She Belongs to Me’ (She’s got everything she needs), to pick one from each of the masterpiece albums that preceded “Highway 61”.

But there are, hidden here and there, chinks in the armor, fleeting glimpses of vulnerability. They’re the soft underbelly of the list above – she did, after all, get to him. And there are a few songs in which the chip slips off his shoulder, his guard down, his sunglasses in his pocket, his heart open. The well-known ‘Girl from the North Country’; the gentle, vulnerable ‘One Too Many Mornings‘; the wrenching, under-appreciated ‘Boots of Spanish Leather‘; and this week’s SoTW, ‘I’ll Keep It with Mine’.

‘I’ll Keep It with Mine’ is notable for at least three reasons:

It’s a fine song, and a relatively obscure one. (That’s two reasons right there.) He never recorded it himself for an official album, just a piano bootleg that appeared years later on the (official) Dylan Bootlegs series. (Quick, name two other major non-love relationship songs from the same period that he didn’t record officially! That’s right – ‘Love is Just a Four-Letter Word‘ and ‘Mama, You’ve Been On My Mind‘, both taking a hilarious and cynical look at male/female relationships.)

‘I’ll Keep It with Mine’ is enigmatic and flawed. What the heck does the title mean? Why is he ‘loving you not for what you are but for what you’re not’? What isn’t she? What’s the subject of the song, anyway? Where the heck did the train engineer come from in the third verse?? But Dylan is Dylan, and somehow it all hangs together on a level I can’t and don’t care to try to ‘explain’. Fact is, 45 years later I’m still rolling it around my brain and over my palate. As Dylan himself said recently on his Theme Time Radio Hour show with so much disarming charm, “You can never tell why someone’s gonna stick something in a song. You just gotta remember that the whole is bigger than the sum of its parts. You can’t expect to understand everything in every song.”

Oh, right, there’s a third reason to take a listen to this song. It’s the only Dylan song I can think of from the 1960s that he misrecorded. Just flat out missed the point of the song. He bangs away at the piano and shouts the lyrics at way too fast a tempo. (Of course, ten years later he began several decades of rapid-fire shouting of what should have been whispered slowly). One of the several early cover versions our SoTW, though, came close to hitting it on the head, that of Fairport Convention.

They’re a leading voice of the English folk movement transmogrifying towards rock in the mid-60s, along with Pentangle and John Martyn. Their lead singer is Sandy Denny, a British Judy Collins, and I sure like Richard Thompson’s acoustic guitar leading a rock setting. Their treatment here really isn’t anything spectacular, just a tastefully wistful, properly laid-back rendition of a lovely and puzzling song.

I guess when all the sound and fury and high-falutin’ talk is over, what we’re left with is one darn pretty song.And if anyone out there understands it, please let me know.