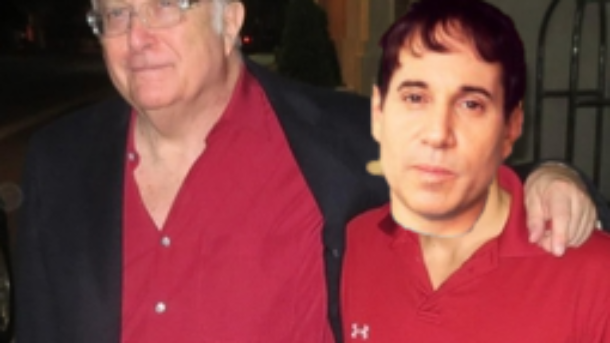 You all were so nice about SoTW 304, ‘Amulet’, which Paul Simon wrote for Luciana Souza, that this week we’re bringing you another obscure collaboration of his, this time as a guest on Randy Newman’s terrific song, ‘The Blues‘.

Even if you’re an ardent Randy Newman fan, or a Paul Simon one, or both (I’m guessing there’s a pretty serious overlap there), you might have missed this one. Or forgotten about it. Or, like me, just happy to hear it again. Because it’s such a good song.

I know absolutely nothing about ‘The Blues’ other than it’s from Randy’s 1983 album “Trouble in Paradise” (well worth visiting for ‘I Love L.A.‘ and one of my favorites, ‘My Life is Good’). Other than that, nada. Not a word on the whole interweb. I could find only this one, rare photo photo of the two of them together.

Obscurity notwithstanding, it’s a darn good song, worth listening to over and over. Since I don’t have anything to say about it, just to fill the page while you’re listening to it, I’ll tell you how I didn’t meet Randy and how I did meet Paul.

Randy came to ‘our fair shores’ just once, in the ‘90s, for a solo performance. Somehow I found what hotel he was in, called told him I might be his oldest fan. That I’d discovered his name from Judy Collins’ treatment of ‘I Think It’s Going to Rain Today’, his first notable recording. And I told him how I’d waited impatiently for his first album, unfortunately overlooked and underappreciated, a pantheon album for me. And I bought it as soon as it came out, the single copy of the album sold in Ohio with the original cover, an album that flopped so badly that Reprise Records offered refunds on it. As I said, a masterpiece. And I started singing to him over the phone the B-side of The Fleetwoods’ ‘Lovers by Night, Strangers by Day’, the beyond obscure ‘They Tell Me It’s Summer’, the first song Randy ever sold, at 18. (I led an exceptionally lonely childhood.)

He laughed and invited me to meet for coffee before the show. I told him that I’d love to, but it was the premiere of a play I had written and directed. (Jeff sighs deeply.)

That’s how I didn’t meet Randy.

But I did meet Paul.

And Art. Spring, 1967, they schlepped to rural western Pennsylvania, just the two of them, acoustic, to play their current single ‘Homeward Bound’ and their recent #1 hit ‘The Sounds of Silence’, at my very small college. With a small newspaper. With a small staff. Who struggled to fill the small paper, enabling me to finagle my first interview with real celebs, albeit minor ones. Their mega-stardom was still a year or so away, but I was still pretty intimidated and nervous, as you can imagine.

I knocked on their dressing room door, my frizzy Jewfro all a-frizz. Very short Paul opened the door, turned to his partner and said, “Hey, Art, this guy looks just like you.”

They were warm and open interviewees. You have to remember, this was 1967, i.e., pre-internet, pre-even liner notes. I knew nothing about them and very little about anything else. But I was experiencing, out there in Goysville, something of a Jewish awakening, and I guessed by their names and their New York attitude that they might actually be…

“Pardon me,” I said as I was leaving, not knowing when to keep my mouth shut, “but are you guys—lantzmen?” (the Yiddish word for what we call today MoTs).

They looked at each other uncomfortably and nodded. I thanked them for the interview and left, buoyant from my first real interview and the cool affirmation of my ancestral roots.

“He’s got the blues, this boy,” sings Jeff, smiling as he recalls how he did meet Paul.

Burned up in a factory in Springfield Mass.

Hustlin’ down the city streets

And selling his ass for a dollar bag.

Locked up in a prison out in Oregon.

Killed in a bar fight with a pair of Marines and a sailor, oh.

When I was nine years old

My daddy ran away

With a woman he met on a train, oh

Ran to the room

Where his piano lay in wait for him

He played and he played

He played and he played

A year ago I met a girl

But she dumped me

And all we’d hit were the blues