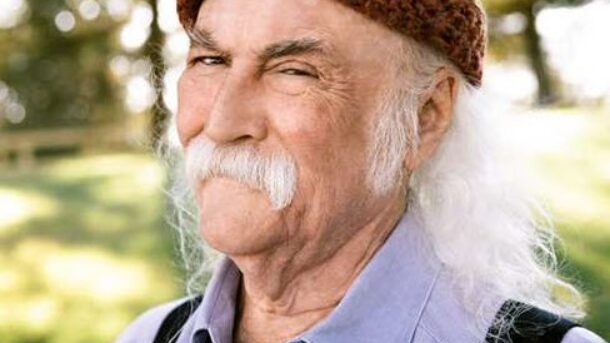 Nothing’s ever as good as it was. Except sometimes.

So Croz has passed to the other side.

His life was pockmarked by self-destruction, acrimonious relationships, personal tragedies and flamboyant provocation. His contributions to The Byrds and Crosby, Stills and Nash in the 60s catalyzed music so beautiful that it still evokes awe in some of us.

Then for 50 years, between jail and rehab and hospital and breakups and feuds and uninspired retread touring, Crosby released a desultory few albums. He had one kidney, a second-hand liver, and by all accounts should have kicked the bucket long ago.

A while back I picked through the meager offerings of Crosby’s discography from 1972-2017. Slim pickings, but, hey it’s Crosby, who knows? In SoTW 260 I presented you with one obscure gem I unearthed, co-written with Joni Mitchell, ‘Yvette in English’. In recent years he teamed up with James Raymond, the musician son whom he hardly knew, and created three respectable if unremarkable albums—“Croz” (2014), “Skytrails” (2017) and “For Free” (2021).

I figured I had done my duty. I congratulated Crosby for making some respectable if less than memorable music in his dotage, and waved sayonara.

In 2016, Michael League took Crosby in hand. Michael (b. 1984) is the bassist leader of Snarky Puppy, one of the hippest, most adventurous fusion bands around. He grew up idolizing Crosby. So he corralled him, dragged him into the studio, promising to produce him an album within weeks. “Lighthouse” was fine, the best music Crosby had made in decades, acoustic and gentle if not memorable. Still, it was remarkable to see Crosby working productively as he as he neared 80.

That’s when I was really ready to bid Mr Croz adieu.

What keeps me obsessive

Among the musicians League drafted for “Lighthouse” was Becca Stevens, one of the finest young singers/musicians I know. Together with pianist/vocalist Michelle Willis, the four formed The Lighthouse Band. This was their first recording (2017), and I loved the idea of 3 youngsters helping Crosby work his harmonic magic on Joni’s ‘Woodstock’, as opposed to CSN&Y’s hit  version.

Then in 2018, Crosby and the kids released “Here If You Listen.”

Okay, said I, Crosby with Michael League and Becca Stevens and one foot in the grave, let’s give it a listen, if only out of respect.

Turns out, to my utter amazement, that “Here If You Listen” is Crosby at his very best. In a league (ouch) with ‘Guinnevere’ and ‘Everybody Has Been Burned’ and ‘Déjà Vu’ and ‘Renaissance Fair’. For many of us, that’s about as high as praise can go.

It’s a remarkable album, gorgeously recorded, exultant vocal tapestries, as beautiful as anything you can imagine, jazzy, elusive, entrancing, hypnotic. A gossamer trip.

CS&N never made music this beautiful. The youngsters here bring in half a century of musical growth beginning where CS&N. This is what CS&N could have evolved into. It’s that good. League and Stevens are artists of stature in their own right, but they blend their voices and their Voices to Crosby’s. Nash’s nasal tenor is conspicuously absent—for the better. The vocals mesh with immeasurably more refinement than 50 years ago.

Crosby says that he came into the studio with a guitar lick, and the four of them wrote the song together on the spot. “It’s a triumph of writing. That’s what happens when you put the four of us in a room.” Well, Croz, with all due respect, I think there are three very active ingredients here and one alchemist.

“When you roam you’re traveling alone,” he sings. He lived as a soloist, habitually alienating all those closest to him. But he made his magical music in harmony. He was a brat of a junior partner in The Byrds, the harmonious but dissenting voice in CS&N, then alone and lost for decades. Miraculously, in his late 70s, he taken in hand by an energetic and practical devotee turned sponsor, surrounding him with three ultra-talented young, sympathetic voices at his musical service.

Who could ask for more?

“Here If You Listen”

It is a glorious album. Not just arguably the best music he’s ever made. It’s also wise and thoughtful. (I’m reminded of how thoughts of imminent mortality inspired Bill Evans to remarkable musical depths.) This album is Crosby’s swan song, his good-bye to the world. It even contains a self-penned eulogy, addressed to his son, the lovely ‘Your Own Ride’:

I been thinking about dying and how to do it well,
How to stand up and face it or just lie where I fell.
It’s a matter of honor, having stood up to night[?]
To spend my last hour clearing a path
For your own ride.
You will ride with the owls at night
Your own ride
I will be there beside you, child.

The Lighthouse Band even had time to tour and recently released a live album. I’m glad Croz got to feel some warmth from the world. But “Here If You Listen”, that’s the grail.

I have to admit, I’m not ‘sad’ as such about Crosby’s passing. I’m of an age when I can no longer pretend that my own mortality is a theoretical matter. Rather, I’m feeling more proud of Crosby for creating such dignified and glorious exit music.

Corporeal David may have passed, but he’s still here with us. Here if you listen.

When you roam you’re traveling alone
Tryin’ to catch each grain of sand slipping through your hands.
And the wind Is weathering your skin.
And all that’s on the outside is breaking you in.
Let me be the oil upon your glove
Moving in the creases
Soften what’s tough.

And when the weight is layered in rounds
Like Venusian clouds, you can’t find your way out
Let me be your glory in the sky
Circling your shadow, cradling the light.

Sleepless night, wake again
The strength of the heart is in contentment
Let me take your worn hands
If love could lift us then I would carry them