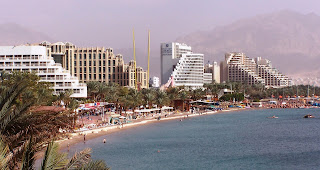 This week’s SoTW is by Chano Dominguez, a Spanish jazz pianist (b. 1960) who’s carved a successful career of fusing a modern jazz sensibility with traditional flamenco music (palos), dance (baile) and song (cante).

Unfortunately, I can’t even spell Andalusian without peeking, and I know virtually nothing about flamenco or Chano, so you’re not going to learn anything of substance about him here.

But I spent last week at the Red Sea Jazz Festival in Eilat, four long warm summer nights of immersion in live music at the lovely port venue. Chano was hands-down Best in Show there, so I’ll just have to try to say a few words about him without embarrassing myself or misleading you.

The two acts which outshone all the others for me and many others were Paquito D’Rivera, a wily old Cuban saxophonist who played with Dizzy Gillespie for years, and put on a great show of sophisticated, fun, intelligent, Latin-infused jazz of the Afro-Cuban flavor. And Chano did the same on the next night with his New Flamenco Jazz.

Scott Yanow of All Music Guide (a site I virtually reside in and heartily recommend) writes, “Of all the post-swing styles, Latin Jazz has been the most consistently popular… The emphasis on percussion and Cuban rhythms make the style quite danceable and accessible. The style has not changed much during the past 40 years but it still communicates to today’s listeners.” I have been making an effort to educate myself in all sorts of Brazilian music in recent years, but Afro-Cuban is still pretty much off my radar, infectious though it may be.

Chano began most pieces with a lovely, lyric, Bill Evans-influenced piano solo that absolutely charmed and captivated me. Then the bass and drum joined in behind him, and it all began to swing. And then, slipping in unobtrusively were the hand-clappers—three guys sitting next to each other opposite the piano: a singer, a dancer, and a percussionist playing on the box he was sitting on. Crazy, wild rhythms, complementing and enhancing the lovely American-informed jazz coming from the piano. Then the whole business got Latin. The singer (who looked like a Columbian drug soldier, you can see him in the clip) sang in what I assume is traditional cante style. The dancer (who looked like a bantamweight gay waiter in a seedy restaurant in the port of Valencia) danced what I assume was traditional baile. It was all quite intoxicating. Made the whole trip to Eilat worthwhile.

I couldn’t find anything among the 9 CDs of Chano’s that I’ve accumulated which really reflects the music we heard. Attached is the closest I could find, ‘Tangos del fuego’, from the CD “New Flamenco Sound”. And here’s a clip (Oye Cómo Viene) made in a studio which gives you a bit of a visual picture of a tamed-down version of what was going on at 3 AM in the Eilat port. It will give you some taste of the music and the sprit, but to be honest, the live music really was–alive.

I have very little experience listening to live jazz. I live in a place where it’s about as common as Martian field hockey, and I’m a snob to boot. I don’t like sharing my musical experiences with anyone other than my headphones (see SoTW 14 on my experiences at the festival, for those of you who read Hebrew). But what the heck, a chance to hang with my buddy Mike for four days and see some bands, what could be bad?

To be true to my effetist, kvetching roots, I’ll tell you what could be bad. The hotel was from hell (30,000 children, a guest bashing the maitre d’ over the head with a broomstick). The selection of kosher restaurants in Eilat rivals that in Dnipropetrovsk, and most don’t open till 8 PM (the festival goes from the evening till the morning). The best music was at the jam sessions from 3 to 6 AM (I don’t know about you, but decades of conditioning have trained me to provide for a basic need other than listening to music at that hour). The seats were made out of special industrial-hardened plastic. The bathrooms at the site weren’t fit for swine. And almost none of the music was really first-rate.

Marina Maximilian was immature and unfocused, but was conducting admirable experiments in open vocal jazz. Dee Dee Bridgewater and Robin McKelle were polished. The crowd loved Danny Sanderson and John Scofield. HaBanot Nehama were received very warmly. (You’ll note that I didn’t include myself in any of the above.) Eli Degibri and Dafnis Prieto provided some real, challenging, mainstream jazz (a surprisingly small minority of the music presented). Rob Ickes is a fine bluegrass dobro player, just now learning the language of jazz, but I did enjoy both his concert and master class. We heard another really fascinating class with drummer Billy Hart, who’s made 600 CDs with all the greats of our time.

But in spite of all, I really did have a fine time. It’s great to get away with a friend of the male persuasion (bromance, in today’s jargon), the hotel room was fine, and all that professional, live music in a really simpatico atmosphere is a trip. Going through the list of performers, I find myself being pretty critical of almost all of them. But the sum really was greater than the parts. I wasn’t able to make the trip last year, missing one of my recent discoveries, bassist/singer Esperanza Spalding, as well as one of my very favorite artists, the incredible vocal artist Kurt Elling. Don’t know who’ll be there next year, but I sure hope it will include me, waiting up all night, looking for that elusive musical grail.