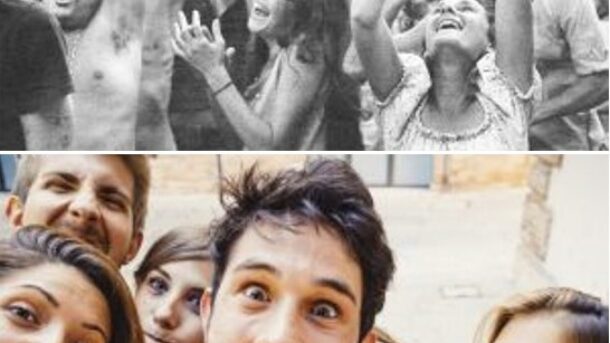 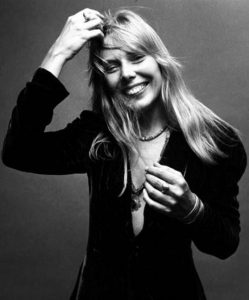 Joni Mitchell isn’t relevant for the 21st century. It’s a shame, I cry over it, but it’s true.

She evoked immense admiration for her precision craftsmanship and gushy affection for her emotional stripteases among her peers, the era whose epithet she helped coin—The Woodstock Generation. And of course she’s spawned several generations of introspective singer-songwriters, strong younger women building on the ground Joni broke. All of them credit Joni as their soul-mother.

But she was of a different generation, and no matter how much the young ‘uns may pantheon her, I don’t believe they have an inkling of the world of which she speaks.

Let me take one song, try to explain why it was so relevant and meaningful back then, and then why I think it’s so irrelevant to the 21st century: ‘Electricity’, a fine, overshadowed song on a fine, overshadowed album, “For the Roses” (1972), wedged between the masterpiece of intimacy (“Blue”) and the large-canvas grandeur of the orchestral (“Court and Spark”). 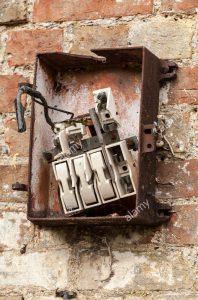 The song employs an extended metaphor of love as electricity, the two lovers grappling with the throes of shorts and frayed wires, Joni at her most literary. She protests relating to her songs as mini-romans a clef, but that’s disingenuous. She must enjoy sprinkling her songs with all those intriguing, intimate details such as James Taylor’s suspenders in the preceding song, ‘See You Sometime’. It’s a signature device–deny it as she may, we all revel in Joni’s juicy (or even gooey) autobiographical details, the catalog of her paramours.

To explicate ‘Electricity’ in the broadest of strokes, there’s a couple dealing with an electricity problem/outage which symbolizes their relationship. It’s all a mess (“She’s got all the wrong fuses and splices”; ”The masking tape tangles, It’s sticky and black”), and neither they together nor she alone can “fix it up too easy”. It’s a real, undeniable problem–the circuit just keeps shorting.

There are two difficulties in parsing the song. First, the chronology is chopped up. To put it in order (but you know this already; we’ve all experienced the same arc in a transitory relationship):

2. He sang her soothing songs that (still) run through her circuits like a heartbeat 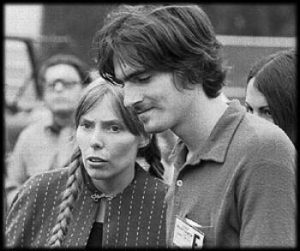 3. He moved to a different place (with a good dog and some trees, but his heart over-icing) where she doesn’t fit (She don’t know the system, she don’t understand)

5. She holds a flashlight for him, to fix the fusebox/relationship.

6. She even holds a (non-electric) candle for him, begging him to fix things. 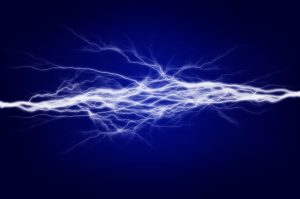 The ending is the Joni we all know and love: No rancor, elle ne regrette rien. She begs him to show her how to fix it, but he won’t. He just leaves her with his song coursing through her bloodstream. There are those who’d say it’s an allegory for James having gone and married Carly, but she got a good album out of it. Just stoking the star maker machinery,

Joni is canonized today as a harbinger of a new perception of the female of the species, and justifiably so. I know lots of young musicians of the female persuasion who place Joni’s bust on the mantle of their heroes and heroins, right alongside Jim, Jimi, and Janis. 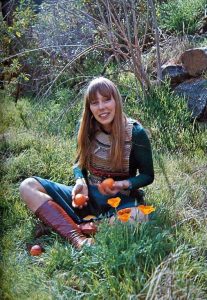 Worshiping those gods of My Generation has become a ritual. Praising J, J and J has become a knee-jerk genuflection. I admit that I sometimes take advantage of that superstition. More than once in conversation with a Millenial have I name-dropped kissing Janis or hurting Joni’s feelings in order to garner Street Cred.

I do it more and more frequently as I despair of creating any meaningful dialog with these kids. I simply flash my “I was at Woodstock” badge, or just shove into the conversation “I saw the Beatles perform” and watch their jaws drop. It works for a while, but I know they’re worshipping false gods. The Paul McCartney touring today isn’t the Paul of ‘Penny Lane’. Bob Dylan singing ‘That Old Feeling’ or ‘As Time Goes By’ (better them than ‘The Best is Yet to Come’) is not Bob Dylan singing ‘The Times They Are A-Changing’, or even ‘Forever Young’.

Remember the Y2K bug? (I know, it was 22 years ago, so how could anyone under 35 be expected to remember it? Well, I remember it well. I took it half seriously—that at the stroke of midnight on December 31, 1999, the world would collapse. Not just the computers of the world–the world itself. The sun would extinguish. The earth would stop spinning. FACEBOOK WOULD COLLAPSE IRRETRIEVABLY! (Launched in 2004, I know, but still.) 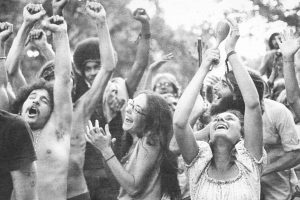 But it passed, and nothing seemed to happen, so everyone thought Doomsday was a marketing ploy.

It wasn’t. The Y2K bug passed. But unbeknownst to all, the seeds of the Millennium Plague had been planted. It was the night when humanity as we know it was infected by cannibal electrons.

I always preferred young people to those my age. They were vital, creative, excited and exciting. You could well attribute it to arrested development. I preferred to think of it as fuel for my creative bent.

I’ve worked with young people all my life. In my 20s and 30s and 40s, as a teacher and playwright, I surrounded myself with teenagers, They invigorated me. I actually learned to speak their language (teenagerese), and wrote successful plays in it. In my 50s and 60s I worked in hi-tech. When I started, my colleagues were in their late 20s; despite all the rumors about ageism, we got along just fine. 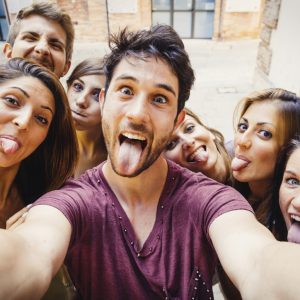 At social gatherings over all these decades, I’d look for an excuse to sit at the young peoples’ table. The girls were prettier, they guys were handsomer, and there was a lot more laughter going on.

But recently it’s fallen to my lot to be involved with Generation Y or Z or whatever, those who spent their formative years staring at screens, those who got their first iPhone before their first kiss. I tell you authoritatively: these creatures are post-Woodstockian zombies.

They engage nothing. You could get dirty. Word of the Century: “Whatever”.

They commit to nothing. They are way too cool for that. Jobs, bands, relationships.

They feel nothing. Emotions are so passé. Give them shots and apps.

They won’t even talk. There’s a 40-year old colleague who shows sparks of caring, with whom I’m trying hard to cultivate a creative relationship. I recently texted him, all fired up, “I got this really cool idea, when can we talk?”, to which he responded in all his Millenial phlegmatism “I don’t have time to talk. Text me.”

Of course I didn’t bother to respond. I’m learning.  Slowly and painfully. I may not be ready to give up my belief in communication and caring, but at least I’ve begun to figure out that it’s a gene they lack. I’m even starting to sit at the grownups’ table.

They no more believe in pain and love and human intercourse than they do in the need to know how to do long division by hand or to remember telephone numbers by heart. 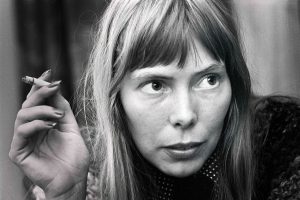 These kids, they don’t know from fuse boxes any more than they know of the human heart. Electricity ain’t no thang, as long as the iPhone is charged. But they even have external energy packs for that.

We denizens of the 20th century know why we can’t hear as well over a cell phone as we can over a landline. It’s because the bits and bytes are compressed, and the frequencies cut off at the knees and at the shoulders. You get only the bare binary data necessary to process the speech. We also know that our hearing isn’t what it once was.

What the Millenials don’t realize is how much of their humanity is lost in the restrictions of that digital compression. Emojis replace emotions. Write nothing other than the obvious and the factual in your text messages, because ‘everyone knows there’s no nuance in email’. Well, you can always add a smiley.

These Generation Whatever kids, they may idolize Joni, but they will never begin to really get her. You and I know that. Joni is the one who created for us a world of passion and pain, of knowing that you’re going to get burned but throwing yourself into a doomed relationship. Feeling and caring, no matter what the cost.

Joni knows she will not fix everything ‘so easy’, but that electric passion is her heartbeat. It will keep her going for as long as she’s alive. She will never write a song entitled ‘Electronics’.

We all know that the Millenial zombies will rule the world after she (and we) are gone. In the meantime, I guess all we have left to do is to listen to Joni. Over and over. And to bewail and bemoan the emotional holocaust this generation is wreaking upon us. Perhaps if they would only really listen to her…

The Minus is loveless, he talks to the land,

And the leaves fall and the pond over-ices.

She don’t know the system, Plus, she don’t understand,

She’s got all the wrong fuses and splices.

And the copper proud-headed Queen Lizzie

Conducts little charges that don’t get charged back.

Well the technical manual’s busy, she’s not going to fix it up too easy.

And she holds out her flashlight and she shines it on me.

She wants me to tell her what the trouble might be.

Well I’m learning–It’s peaceful, with a good dog and some trees

Out of touch with the breakdown of this century.

They’re not going to fix it up too easy.

We once loved together and we floodlit that time–

But the lines overloaded and the sparks started flying,

And the loose wires were lashing out at me.

She’s not going to fix that up too easy.

But she holds out her candle and she shines it in,

And she begs him to show her how to fix it again,