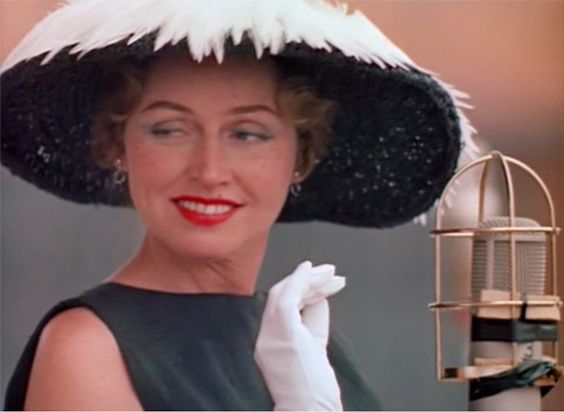 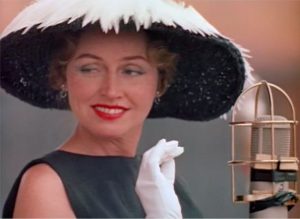 One of the first songs you ever learned, the soundtrack to your skating lessons at the rink, one of the songs hardest wired into your brain, is the ubiquitous ‘Tea for Two’. This week we’re going to trip over a few yellow bricks on memory lane, but with an ulterior purpose at the end.
The song was written by Vincent Youmans with lyrics by Irving Caesar for the musical No, No, Nanette in 1925, when Vaudeville was still transmogrifying into musical theater. Here’s what the original version sounded like.

But ‘Tea for Two’ quickly became a fundament in our collective musical consciousness. Among the notable performances:

Anita O’Day died in 2006 after a long and turbulent life–lots of marriages, affairs, alcohol, drug addiction, prison, as documented in her harrowing autobiography “High Times Hard Times”. But my, that girl could sing. She’s a distinguished member – my favorite, actually – of the very elite club of 1950s white female ‘cool’ jazz vocalists (June Christy, Rosemary Clooney, Sheila Jordan, Helen Merrill, Peggy Lee, Julie London). They started as soloists for big bands of the mid-1940s (Anita sang with Gene Krupa, Woody Herman, and Stan Kenton), then as soloists, working in the wake of the bebop idiom. This meant singing mostly standards from the Great American Songbook in a swinging style but with great emotional reserve, and lots of scat improvisation, random vocables and nonsense syllables or without words at all, improvising on melodies and rhythms, the equivalent of an instrumental solo but here using the voice. 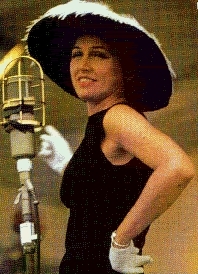 The Newport Jazz Festival was held every summer in Newport, Rhode Island from 1954 to 1972, still running in various forms. It served as a conclave for all the jazz greats of the time and inspired a very large number of live albums and quite a few legendary performances, notably Duke Ellington’s in 1956. The 1958 festival was captured in a very fine film, “Jazz on a Summer’s Day“, well worth looking up, with great 1950s jazz and an astoundingly evocative gallery of toddlers, lovers and hipsters. This is what a film of a music festival should be, and it’s as precise a portrayal of a place and time as you’re likely to run into. It features Jimmy Giuffre, Thelonious Monk, Sonny Stitt, Dinah Washington, Gerry Mulligan, Chico Hamilton and Louis Armstrong, but Anita’s performance of ‘Sweet Georgia Brown’ (another old workhorse, from 1925) and ‘Tea for Two’ stole the show. ‘Sweet Georgia Brown’ takes no back seat; but listen especially to ‘Tea for Two’, to her ‘trading fours with her long-time drummer, friend and fellow-junkie John Poole in the middle of the song. But where the magic of jazz really happens is in the last minute, ‘the sound of surprise’. “We’d just begun doing it as a fast tune,” she writes, “And it was as fresh to us as to the audience.” 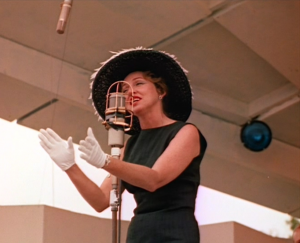 Her sleeveless 1950s version of a LBD (little black dress), the over-the-top cartwheel hat, the white gloves—she’s the epitome of class. And she was “high as a kite” (in her words) when she went on stage. She says that she really enjoyed doing an afternoon show because for a change she could see the audience, including fellow songstress Chris Conner, and watching her enjoying the show gave her a big kick. But as striking as her apparel is, it’s Anita O’Day’s great singing that makes the appearance so memorable.