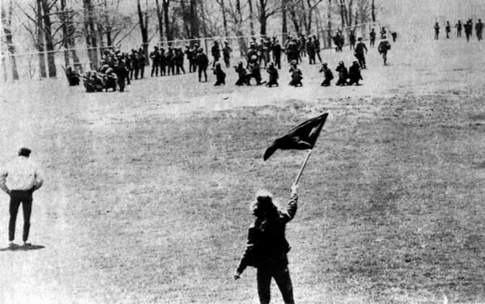 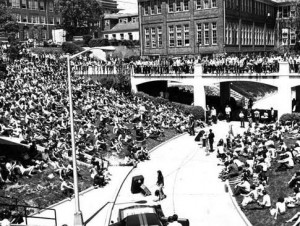 I suppose all old fogies think their Day was special. But it seems pretty obvious and indisputable to me that those years of flower power, Sgt Pepper, and Woodstock hold an interest above and beyond the norm. Last year I gave a lecture to a group of very bright undergrads (on the other side of the world from where the aforementioned events took place) about those times and their music, and the degree of the kids’ expertise was really quite outstanding. They’ve memorized the Jimi Hendrix canon, pored over the Woodstock outtakes films, purchased and re-mastered The Beatles Remastered. Colorful, heady, memorable times, those late ’60s. 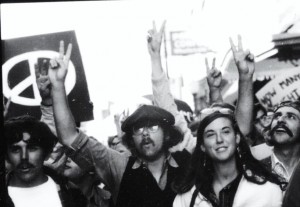 But if we’re going to be truthful, all this nostalgia has its ugly underbelly. The Woodstock nation didn’t come into being spontaneously. It was fueled, yes, by babyboomers moving out of the house and into the realms of burgeoning sexual freedom, self-exploration, and idealism. But there was one unsympathetic devil lurking behind all that jingle-jangle—The Draft.

There was a war going on, in Vietnam, and Richard Nixon was trying to send me over there to get myself killed. Here, let’s try to build a scaffolding of pertinent facts.

Throughout 1969, American soldiers were being killed in Vietnam at a rate of 223 a week. Thirty-two soldiers a day. My friends and I were being pursued by the draft to join those figures. At that time, 53% of Americans approved of Nixon’s handling of the war, 30% disapproved.  We were among the unbathed minority. 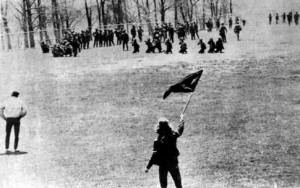 In August, 1969, half a million hippies showed up at Woodstock, seemingly out of nowhere, for 3 days of peace and love and music.

In December, 1969, promoters organized an attempt at a free ‘Woodstock West’ at the Altamont Racetrack in northern California, with The Rolling Stones as headliners. Hell’s Angels were right in front of the stage – according to most versions hired to enforce order, an oxymoronic plan if there ever was one. There was a lot of scuffling and fighting, reaching its peak during the Stones’ set when one Meredith Hunter was stabbed to death after brandishing a gun. 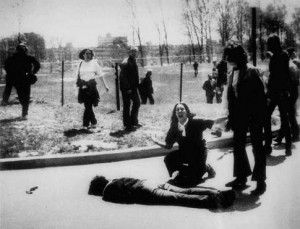 On April 30, 1970, Nixon announced the invasion of Cambodia. Protest strikes broke out on campuses across the country. The strikes were mostly non-violent, and included marches, disruption of classes, and sit-ins in college administration buildings. On May 4 – 51 years ago this week – at Kent State University in northern Ohio, National Guard troops opened fire on protesting students, killing four and wounding 9 others. A week later, two more students were shot and killed at Jackson State College in Mississippi. A wave of violent and non-violent protests swept the country, involving four million students closing more than 450 colleges and sparking marches of 100,000 in Washington and 150,000 in San Francisco. (Thanks for the picture above of the march to my buddie Rod Pennington.)

It has never been conclusively determined if the Guardsmen fired on orders or spontaneously out of frustration. 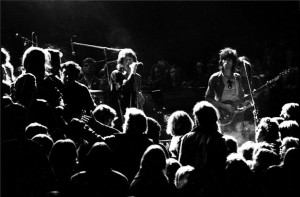 The Kent State massacre was a trauma for us. Our university (in southern Ohio) was shut down immediately, students running as fast and as far as they could. The university was opened especially for a graduation ceremony, probably sometime in June or July. But by then, I was already packing for a country where I felt wanted.

My most vivid memory of the events is, of course, musical. Not, as you might expect, Neil Young’s song ‘Ohio’, which was composed immediately and released only weeks after the events. My memory came in the form of what I believe was a ‘musical hallucination.’ Oliver Sacks devotes an entire long chapter to this phenomenon in his fine book Musicophilia. He asks a patient why she spoke of musical “hallucinations” rather than musical “imagery.” “They are completely unlike each other! They are as different as thinking of music and actually hearing it,” she answered. 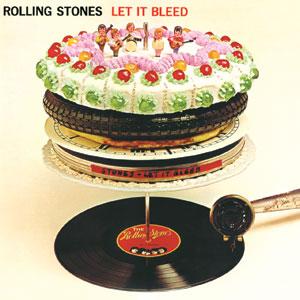 It was the morning after the shootings. I was walking onto campus from my nearby apartment, going towards the administration building to see if it was still being occupied by the protestors. But the campus was abandoned, and my mind was a turmoil of outrage, shock and fear. That’s when I heard the opening bars of the Stones’ ‘Gimme Shelter‘.

It’s a remarkable song, demonic, apocalyptic, emblematic of all the evil and ugliness embodied in the events described above.

The song opens the Stones album “Let It Bleed”, released in November, 1969. It was written by Mick Jagger and Keith Richards together. According to Jagger, “The use of the female voice was the producer’s idea. It would be one of those moments along the lines of ‘I hear a girl on this track – get one on the phone.'” The girl they found was a professional backup singer, Merry Clayton (who at 15 had sung the original version of ‘The Shoop Shoop Song [It’s in His Kiss]”, which later became a hit by Betty Everett and Cher. She had sung on records by Elvis Presley, Burt Bacharach, Tom Jones, Joe Cocker and Carole King. She was one of Ray Charles’ Raelets (“because you have to let Ray…”).  Merry was 21 at the recording of ‘Gimme Shelter’. 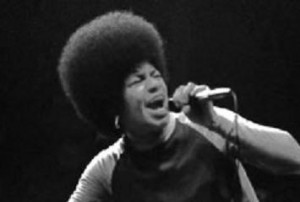 Jagger plays harmonica on it, Nicky Hopkins piano. Brian Jones was already gone. There’s an unreleased version with Richards singing lead. And here’s the song as performed at Altamont. But it’s the end-of-the-world album version that is #38 in Rolling Stone magazine’s 500 Greatest Songs of All Time. It shows up everywhere, from The Simpsons to a video game to three Scorcese Mafia movies to That 70s Show to American Idol.

What’s the song’s connection to the shootings at Kent State? None, really. Other than I actually heard it, in the Aftermath of the event. And because it’s become universally accepted in the minds of me and my friends and the entire Woodstock nation as emblematic of that terrible time when American soldiers killed American citizens.