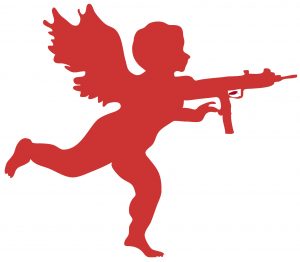 Well, maybe. But maybe not.

I’m not here to sell you a designer box of little wrapped chocolates for $74.49 or a dozen long-stemmed roses for a sum that could feed an Indian village for a decade.

I grew up in a United States where stores were closed on Sundays and Valentine’s Day meant handing out handmade cards to The Ones You Liked in your fifth grade class (a crash course in heartbreak for 10-year olds), just before the country was insidiously and invidiously invaded by The Corporate Commercial Machine! Up against the wall, motherfuckers!!! 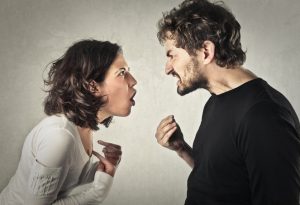 If this Hallmark unholiday serves as a reminder to be especially appreciative of the one you love, I’m all for it. But y’all should know there’s a pretty harsh reality lurking beneath the pink wrapping paper, ready to bite us, as James Taylor so beautifully reminds us in this ostensibly modest little ‘pretty song’ from his 1988 album “Never Die Young”.

It’s James’ 12th studio album over 20 years, arguably the last of his great ones. In SoTW 56, ‘Secret o’ Life’, I soapboxed against the myriads of fans of James’ greatest hits. “To think that James Taylor is ‘You’ve Got a Friend’ and ‘Fire and Rain’ is like thinking that The Beatles are ‘I Want to Hold Your Hand’ or Dylan is ‘Blowing in the Wind’.” In SoTW 112 I explained why I think James Taylor’s version of “Yesterday” is immeasurably superior to that of McCartney.” In SoTW 139, James celebrates mature love ‘On the 4th of July’. And in SoTW 205 I explain why James’ first album is so profound to me. In SoTW 132, James and I mourned the passing of a sibling in ‘Enough to be on Your Way.And in SoTW 46 I explained why the title song of “Never Die Young” speaks so deeply to me about the arc of my life. 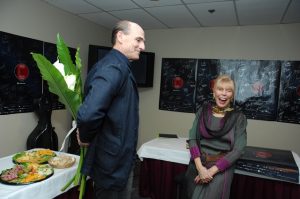 ‘Valentine’s Day’ is an unusual song for James—all piano (Don Grolnick), with some lovely help from bassist Jay Leonhart (plucked and bowed) and the great violinist Mark O’Connor. No guitar whatsoever. If you see somewhere on the infallible World Wide Web (“But it’s written!”) that the song was penned by Hollywood composer John Debney, it’s an untruth. He scored the movie “Valentine’s Day”, but this song is all James. 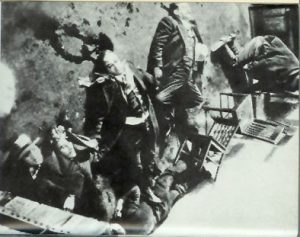 For all of its ostensible pink sweetness, the song is bitterly ironic, an extended comparison of a couple’s relationship to the Valentine’s Day Massacre of 1929, in which four members of Al Capone’s Italian gang (two disguised as policemen) machinegunned seven members of Bugs Malone’s Irish gang in a Chicago garage in a turf war over control of the bootleg market.

Police tried to question survivor Frank Gusenberg as to who shot him. Gusenberg, with fourteen bullets in him, replied “No one shot me.” He died three hours later. 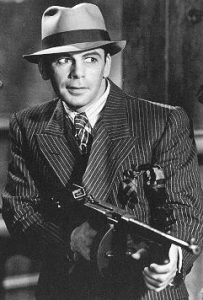 The event was recreated in Howard Hawks’ 1932 movie “Scarface” starring Paul Muni, and subsequently in a dozen more screen treatments. Here’s a medley of those scenes (best not to show this to your Significant Other while presenting the chocolates and flowers). Of course we all recognize the same themes throughout the entire gangster (as opposed to Gangsta) genre (see “The Godfather”, “The Sopranos”, et al).

The first verse is piano and James’ voice. “Beneath the tide the fishes glide/Fin to fin and side to side/For fishy love has now begun/Fishy love, finny fun.” Jabberwocky? Denizens of the deep fishily swimming around some bodies ‘sleeping with the fishes’?

The second verse sets the scene. ‘It’s Only a Paper Moon’ is a 1933 song written by Harold Arlen, E. Y. Harburg and Billy Rose, so associated with the Great Depression that when Peter Bogdanovich asked his mentor Orson Welles if it was a suitable title for his movie, Welles responded “That title is so good, you shouldn’t even make the picture, you should just release the title!” Here’s James singing it himself. 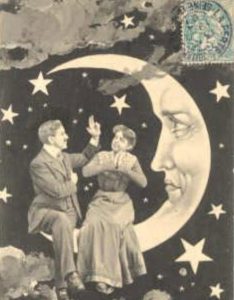 The third verse provides some less rosy coloring: Bootleg gin — I don’t really need to explain that, do I? The porkpie hat was all the rage during the depression, even though Muni was wearing a fedora in the film. ‘Dew Drop Inn’ was a corny name for a restaurant way back when—there was a film by that name from 1919 and a musical from 1923. “You dirty rat”? Depression-era gangster meme from James Cagney’s 1932 film “Taxi!”. Cupid’s dart? Check out this image from a speed dating ad. Ouch. What have we wrought?

The tone gets more ominous in verse four – “Day to repay the one that you love”. Oh, isn’t that a cute little threat? I wonder what was going through the minds of those seven cronies of Bugs Malone as they were lined up against the wall. ‘Take off your hats’—how many movies have we seen in which the gangsters remove their hats at the funeral of a person they’ve just had laid to rest? Boxing was of course the sport of the Depression/gangster world. Going a few rounds without gloves—with what, then? Machine guns? Bare fists? Fingernails? Those a 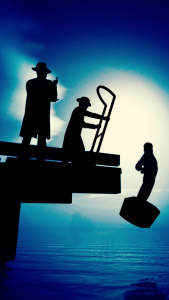 wful words that we speak when we’re in a vicious, bloody argument with our own dear Valentine?

Fifth round. I mean, verse. “Land your punch, I stand my ground/We break for lunch and a second round.” Wow, what a couplet. Could there be a more precise, incisive description of how a couple argues to the death? You might have to go back to Ingmar Bergman to find one.

Or think of all the times when the bell’s finally rung on your gut-wrenching argument with your beloved and you walk away – finally – and you or she slams a door or drops a dictionary or a whatever, to get in the last word. Nothing like that last little jab after the bell has rung, right?

Oh, no similarity between love and boxing at all is there? The biggest difference being that in love all bouts go the full 15 rounds and always end in a bloody draw.

Last verse, last man standing. “We keep score”. Oh, sure. We tally the points, to be absolutely clear how badly both of us are losing. “Love as war.” All of us who have been in a serious relationship have experienced our own domestic siege of Leningrad. 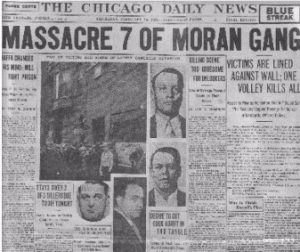 So let’s all try to learn a lesson from James’ beautiful, witty, disarmingly simple but painfully accurate portrayal of how we so frequently most hurt the one we most love. Forget the chocolates and flowers. Let’s remember that no one wins in a war. And that Prohibition is long gone. Let’s use this day to remind ourselves to be decent, patient, loving partners.

Beneath the tide the fishes glide
Fin to fin and side to side
For fishy love has now begun
Fishy love, finny fun 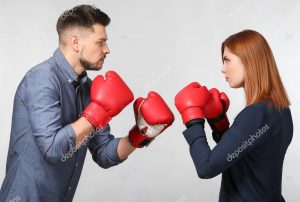 Land your punch, I stand my ground
We break for lunch and a second round
We set them up, we knock them down
Valentine’s Day

Me and you, you and him
Him and her, us and them
We keep score, love as war
Valentine’s Day