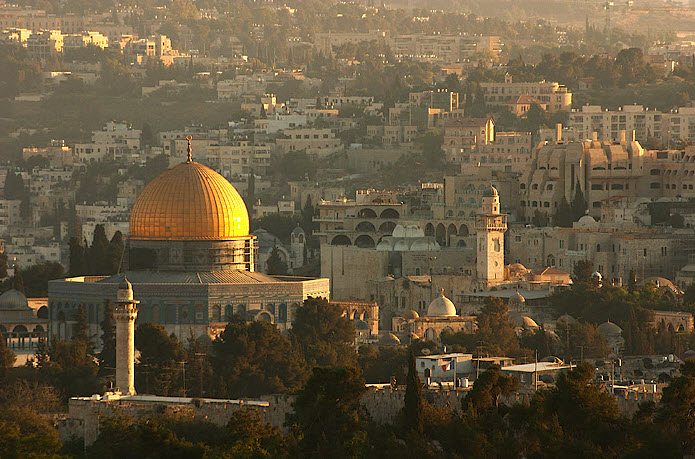 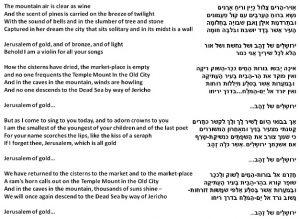 Sunday is Jerusalem Day, marking the 51st anniversary of the reunification of the city. There’s a song inextricably intertwined with that event, ‘Jerusalem of Gold’ (‘Yerushalaim shel Zahav’). So this week I’m going to share with you here my personal connection with the city of Jerusalem, with the idea of Jerusalem, a thumbnail overview of the history of the city, and a look at the song so strongly identified with that event. 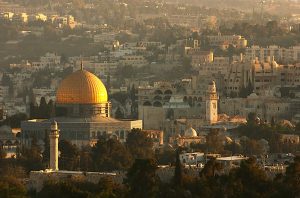 I came to Jerusalem on September 1, 1970, planning to spend nine months investigating my Jewish identity and then return to the US. My world was still reeling from the Kent State shootings, the draft breathing down my neck, and a lot of other walking nightmares best left in the attic. Yeats’ “Mere anarchy is loosed upon the world/The blood-dimmed tide is loosed” or The Stones’ “Rape, murder/It’s just a shot away”, take your pick.

I was 21, and terrified of what the world had in store for me.

I arrived at the dorm in Kiryat Shmuel in the middle of the night, climbed up to the top floor and collapsed. In the morning, I awoke to see three doors: The hallway. A closet.  And then I opened the third door and found a balcony with this view: 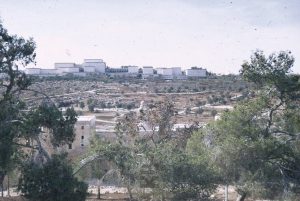 The rust-colored stucco roofs of Rehavia; The Valley of the Cross (the olive grove from which Jesus’ cross was taken, with no road yet traversing it); the Monastery of the Cross; Israel Museum; Hebrew University; the Knesset (parliament); and most of all, the sky.

And my life has never been the same. It was love at first sight.

Two thousand years ago, the Jewish sages said “Ten portions of beauty came down into the world; Jerusalem took nine of them, and one of them for the entire world. There is no beauty such as the beauty of Jerusalem.” (Babylonian Talmud)

That day I went to find Egon, a German-born American poet with a beard down to his bellybutton. I found him digging in the archaeological site at the southwestern corner of the Temple Mount, at about the level of 800 BCE. In other words, I had just gone back 2700 years overnight. 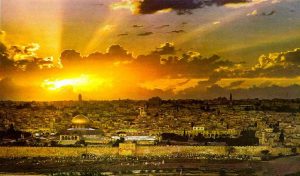 It was that sense of timelessness that got me–the stones, the history they had witnessed. And the beauty–the city turns a profound shade of golden pink at sunset, the angle of the sun hitting the hand-carved stones of the buildings.

The palpable vibration in the air.

Israel was in the exhilarated throes of its victory in the 6 Day War, full of patriotism and confidence and optimism. Back in Cincinnati I had seen bumper stickers aimed at us long-hairs, “America–Love It or Leave It”. I wrote a silly song about my feelings at the time, which somehow found its way into the Library of Congress, ‘Talkin’ Jues Blews’. The song was a self-fulfilling prophesy.

Two months later, I met Yonit. Three days after that, as she was about to board the 15 bus on Jabotinsky Street, we kissed. A week after that we were engaged. A year after that, we were one of the first families to move into French Hill. A year later our daughter was born, two years after that our son. 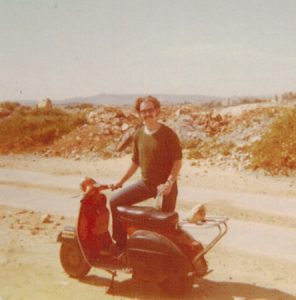 For a year I worked for a book wholesaler, delivering Newsweek all over this magical city on my orange Vespa. That’s when I got to know her intimately. Then while I was studying at Hebrew University, the Yom Kippur War broke out. It slowly sunk in that the doomsday scenario so feared in 1967 had almost come true in 1973. In our military victory of 1967, we had not achieved security. We were still surrounded by enemies seeking our destruction.

But today we’re going to talk about that unique interbellum period of euphoria, when Israel was the David to the Arabs’ Goliath, when we were the valiant, courageous, victimized underdogs.

The Temple Mount is about 36 acres in size, or 11 football fields. From the destruction of the Temple till about 1880, Jerusalem was a God-forsaken backwater populated by about 10,000 Jews (praying at the Wailing Wall, the last remnant of the Temple), 5000 Muslims and 5000 Christians, all living within the city walls. 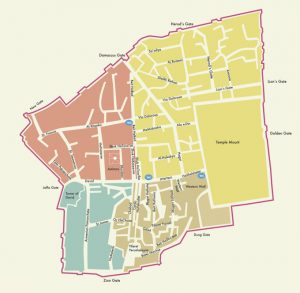 In about 1880, the Zionist movement (led by Herzl) inspired Jews mainly from eastern Europe to come to Israel with the vision of recreating a national homeland. The first Jerusalem neighborhoods were built outside the city walls. My grandmother was born in one of them, in about 1885.

As the Jewish population grew, so did the resistance to it from the local Arab population.

In 1917, the British conquered Jerusalem from the Turks. Jewish immigration increased. Friction grew between Jews, Arabs and Brits. In 1939, the gates were closed to Jews trying to flee Europe. In 1947, there were approximately 100,000 Jews, 30,000 Muslim Arabs and a similar number of Christians (some Arabs, mostly foreigners) living intermixed geographically, although most neighborhoods were predominantly Arab or Jewish. The Old City (the Walled City) had a strong Arab majority, the population outside the Old City was mostly Jewish. 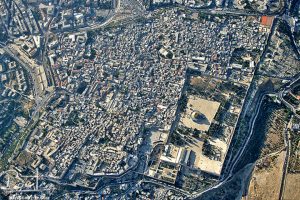 The British announced their plan to end of the Mandate in May, 1948. The UN voted on a Partition Plan dividing the country into two national states, with Jerusalem under international control. The Jews accepted the plan, the Arabs rejected it. The British left, the Jews declared an independent state, the Arabs attacked. In the ensuing war, the fledgling Jewish population (the Yishuv) managed to hold off the invading Arab armies and establish an independent Jewish homeland for the first time in 2000 years.

But the military victory in Jerusalem was only partial—the Old City, in fact all of eastern Jerusalem, remained in Jordanian hands.

A wall was built dividing the city. Jews were forbidden from crossing the border, forbidden from praying at the Wailing Wall. The synagogues in the Old City were destroyed and defiled.

The 6 Day War, Re-unification of Jerusalem

In 1967, Egyptian president Nasser decided it was high time to throw these infidel interlopers into the sea. The combined Arab armies greatly outnumbered that of Israel, and annihilation seemed imminent.

The air was fraught with tension. In all the Arab capitals, mobs were screaming for Jewish blood. The reserves of the Israeli Defense Forces – virtually the entire male population – had been drafted, bringing the country to a nerve-wracking standstill. 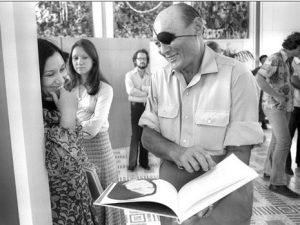 In the middle of this, at the behest of Jerusalem mayor Teddy Kollek, songwriter Naomi Shemer (1930-2004) composed an ode to Jerusalem in honor of Israel’s 19th Independence Day, May 15, 1967. It was performed by the young, unknown Shuli Natan at a music festival, and overnight became the song on the lips of every Israeli citizen during these unbearably tense weeks. Egypt expelled the UN troops from the Sinai peninsula, amassed troops on the border with Israel, and blocked Israel’s southern port of Eilat by closing the Straits of Tiran.

“Jerusalem of Gold” (“Yerushalayim shel Zahav”) expresses the modern Jews’ longing for Jerusalem, echoing the complaint of the Israeli exiles as expressed in Psalm 137: “By the rivers of Babylon, there we sat and wept, remembering you, Zion…If I forget you, Jerusalem, may my right hand be forgotten.” In May 1967, that psalm was reflecting a political and military reality, as well as a spiritual and historical one.

On June 5, Israel launched a pre-emptive air strike against the Egyptian air force, destroying it on the ground, and effectively determining the outcome of the war within hours.

Without a plan or forethought, driven by centuries of longing and decades of strife and suffering, Israel also captured the Sinai from Egypt, the Golan Heights from which Syria had mercilessly shelled Israeli settlements in the north, and the West Bank from Jordan. Including the Old City, including the Temple Mount, which was now under Jewish control for the first time since its destruction two millennia earlier.

The ram’s horn was blown freely, marking what was perceived as a ‘Hidden Miracle’; i.e., one with no direct supernatural intervention (cf the splitting of the Red Sea during the Exodus), but a confluence of happenings which defies rational explanation.

The Song and the Two Jerusalems

Naomi Shemer then added the fourth verse to the song. No longer was Jerusalem the object of our longing, the cause for our tears. Overnight, Jerusalem was real.

In the Jewish tradition, there are two Jerusalems—heavenly Jerusalem and earthly Jerusalem. And never the twain shall meet. 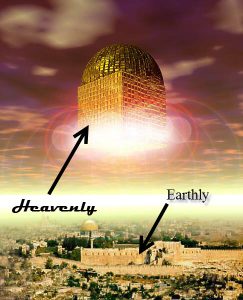 The source for this cosmic dichotomy is Hosea 11:9: “For a god am I, and not a man – [I am] holy among you; I will not enter the city.” (כי אל אנכי ולא-איש – בְּקִרְבְּךָ קָדוֹשׁ – וְלֹא אָבוֹא בְּעִיר) In Tractate Ta’anit of the Talmud (5A), the sages wonder why God’s being holy would preclude him from mingling with Man. R. Elhanan explains: I will not enter heavenly Jerusalem until I have entered earthly Jerusalem. (אמר הקב”ה, לא אבוא בירושלים של מעלה עד שאבוא לירושלים של מטה.)

“Jerusalem of Gold” has become Israel’s unofficial anthem. In the 51 years since the 6 Day War, the two Jerusalems have existed side-by-side. Well, one on top of the other. Physical Jerusalem, where people work and play and pray; and super-physical Jerusalem, where the longing for an unattainable ultimate is as real and undefinable as it has always been.

To tell you the truth, I don’t know how to deal with that. I’m as bewildered by this untenable reality coexisting with this impossible super-reality as I was when I came to Jerusalem 50 years ago.

As you’re driving to work, you pass the Temple Mount. If you’re Jewish or Muslim or Christian, you wave to God. Do you get that? All three monotheistic religions believe that God–in one sense or another–resides there. It’s where the cosmic meets the profane. That creates the vibrations – and the beauty – that are so uniquely my Jerusalem.

Going Up to Jerusalem with Kurt Elling