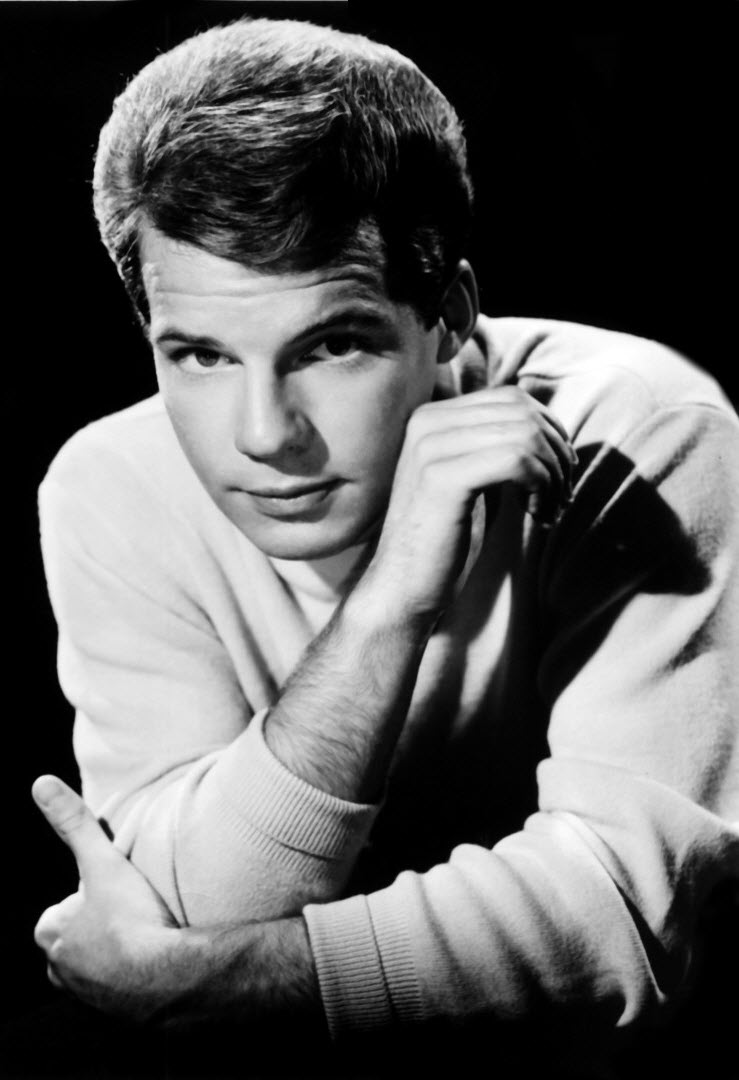 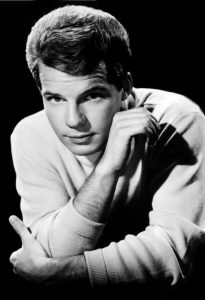 Bobby Vee, ‘The Night Has a Thousand Eyes’ (recording) 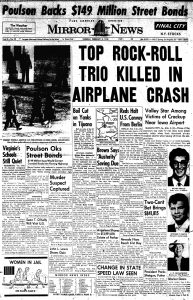 Bad news on the doorstep

But in February, 1959, rock and roll was just reaching Fargo. Bobby and a couple of friends had formed a band two weeks earlier. Bobby came home from school for lunch, and found bad news on the doorstep. On their way to Fargo, headliners Buddy Holly, Ritchie Valens and The Big Bopper had been killed that night in a plane crash, .

A call went out from KFGO, Fargo’s Top 40 station. Was there a local group that could step in and help the show go on? Bobby’s mom ran out to buy the boys matching sweaters and ties, his dad came up with the name The Shadows, and the boys cram-rehearsed all the Buddy Holly songs they could play.

Though the scars of that night haven’t yet healed (see ‘American Pie’), Bobby and the boys were a hit. By June they had recorded a Bobby-penned Buddy-cloned single, ‘Suzie Baby’, virtually indistinguishable from the master himself. The song went world-famous in Minnesota. 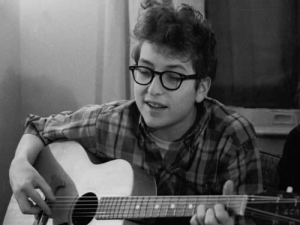 The boys decided they needed a pianist, and auditioned a kid from Hibbing who introduced himself as Elston Gunnn, but whose real name was Bobby Zimmerman. He played a few gigs with The Shadows, then left for Omaha where he got a job as a carburetor out at the hot-rod races every Thursday night.

In 2013, Elston (now more widely known as Blind Boy Grunt) was playing a show in St Paul, where he said:

“Thank you everyone, thank you friends. I lived here a while back, and since that time, I’ve played all over the world, with all kinds of people. And everybody from Mick Jagger to Madonna. And everybody in there in between. I’ve been on the stage with most of those people. But the most beautiful person I’ve ever been on the stage with, was a man who is here tonight, who used to sing a song called “Suzie Baby”. I want to say that Bobby Vee is actually here tonight. Maybe you can show your appreciation with just a round of applause. So, we’re gonna try to do this song, like I’ve done it with him before once or twice.”

Sounds fabricated? You can see it, right here. Elston also recalled that Vee “had a metallic, edgy tone to his voice and it was as musical as a silver bell.” Vee for his part remembered Elston Gunnn “played pretty good in the key of C.” But we get ahead of ourselves. 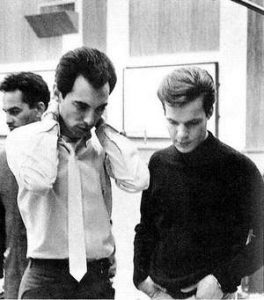 The Elston-less Bobby Vee and The Shadows were signed by Liberty Records in LA and assigned to the tutelage of a Texan high-school dropout, the 19-year old Snuff Garrett. Snuff went on to work with Sonny Curtis, Johnny Burnette, Brenda Lee, Roy Rogers, Gene McDaniels, Buddy Knox, Walter Brennan, Gary Lewis & the Playboys, Del Shannon, Sonny & Cher, Cher and JJ Cale. He gave Leon Russell and one Phil Spector their first jobs in the business. Walter Brennan and Phil Spector—I’m not making it up.

Snuff took Bobby to Norman Petty’s studio in Clovis, NM, where Buddy had gotten his start. They recorded ‘Devil or Angel‘,  an old R&B cut by The Clovers (who did the original version of the Leiber-Stoller classic ‘Love Potion #9’). Bobby’s cover went to #6 nationally, as did their next single, ‘Rubber Ball’ (co-composed by Gene Pitney under his mother’s maiden name). 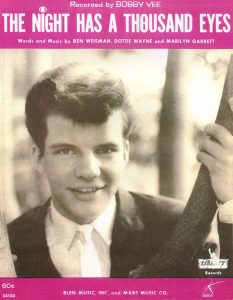 Snuff took a shopping trip to New York to shop at the Brill Building, where he was offered a tune by the young husband-and-wife team of Gerry Goffin and Carole King, who had just had their first #1 hit with The Shirelles’ ‘Will You Still Love Me Tomorrow’. Dion had recorded it, but wasn’t planning on releasing it. Snuff felt that the song lacked a kick, so Carole added the “My tears have fallen” intro. Bobby’s version went to #1, his only one, Goffin-King’s second of many.

Bobby had 36 songs in the Top 100, mostly in the pre-Beatles early ‘60s. You’ll forgive me for not giving you all 36. Or not. But I’m running the table here, so you’re going to have to make due with a few of my favorites: 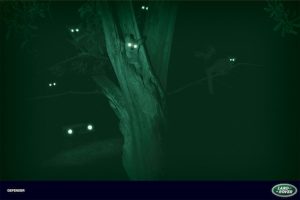 And last but certainly not least in the list, my personal favorite, the song I choose to remember Bobby by:

It was kept out of the top spot by Paul & Paula’s ‘Hey Paula’ and The Rooftop Singers’ ‘Walk Right In’. Competition was stiff before The Fab Four took over. 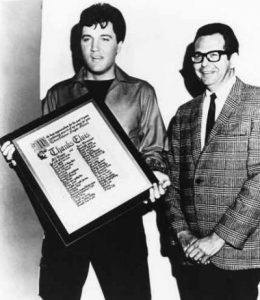 Bobby’s ‘The Night Has a Thousand Eyes’ was written by Benjamin Weisman, Dorothy Wayne, and Marilyn Garrett. I don’t know nothin’ about the two ladies, but this is what Elvis (Presley) had to say about Mr Weisman (at a bacchanalian post-Vegas run party, shortly before The King died): “I want you all to meet Ben Weisman. The man who has written more songs for me than any other writer – 57! I want to hear it for this man”.

What can I say about it? Not too much, really. It’s a pop song. Charming and catchy. The stuff of my innocent youth. I readily admit that when I was listening to it in 1962, I didn’t visualize it like this freakish clip. The director is uncredited, but I’m hoping he’s kept under supervision when he leaves the grounds. I particularly like the blonde with the seaweed whip. 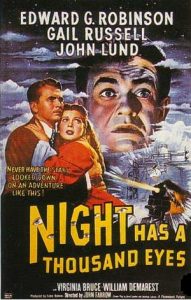 Bobby’s tune shouldn’t be confused with

Bobby’s song has had numerous covers, including by Jennifer Connelly (from the movie “Dark City”, better on the eyes than on the ears) and American Idol Vegas Week, one of the ugliest, most aesthetically offensive clips I’ve ever had the misfortune to watch 8 seconds of.

So, Bobby, what shall we say in parting? R.I.P. Thanks for the hits, thanks for the mini-dramas, thanks for the memories. We’ll remember you fondly. And who knows, maybe Elston Gunnn will play ‘Suzie Baby’ or ‘Take Good Care of My Baby’, or even ‘The Night Has a Thousand Eyes’ the next time he plays Fargo.