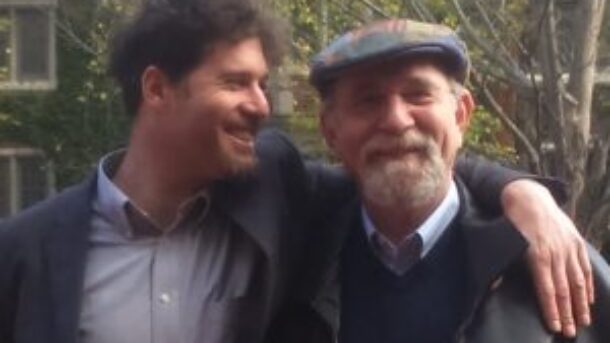 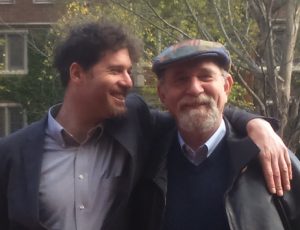 My son’s coming back home.

After seven years abroad, on various other sides of the world, N is coming back to the country where he was born, where his great-grandmother was born, where about a hundred generations ago all of his ancestors were born. Where we’ve all been waiting for him. Him and his wonderful wife (daughter in so much more than law) and his five wonderful children, each one of them bearing my grandfather’s name. Well, kind of, but that’s another Ellis Island story.

He’s going to be living 100 km away. Rather than 10,000. Two fucking zeros, in one fell swoop. There’s nothing in the world that could make me happier.

I think that’s cause for celebration. And since I don’t drink champagne on a Friday morning, I’m gonna share a song with you. 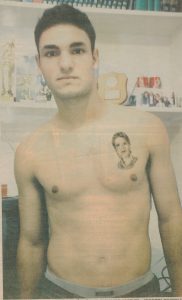 Kobi Nahmias: “Now Daddy will always be on my heart.”

N’s motives for returning aren’t completely clear. He keeps his cards close to his chest. He had a great job out there in the diaspora, and he’s coming to a much-coveted one here. But that’s the vehicle, not the tenor. He chose to leave a situation devoutly to be desired by most sane people, in exchange for a cubbyhole in a crazy little corner of the craziest neighborhood in a patently crazy world.

I’m not quite clear just why he’s coming back. To tell the truth, I don’t think he is either. But since he’s never gotten around to explaining his motive (don’t look a gift son in the mouth), I guess I’m free to invent one for him:

Just to be near his dad.

I’m reminded of Kobi Nahmias, who played left midfielder for a 3rd division football club nearby. Kobi had his father’s portrait tattooed right on his left breast. It was the least he could do.

But there are other models, musical ones.

Model I: To me he is ev’rything strong; no he can’t do wrong, my dad. 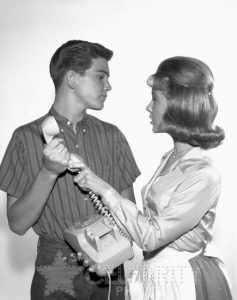 Take, for example, Paul Peterson (b. 1945). Paul started out as a Mouseketeer, appeared in the 1958 film “Houseboat” as the son of Cary Grant and Sophia Loren (that’s some pair of genes!), then went on to find fame, fortune and family as Jeff (no relation) in eight seasons and decades of reruns in 1950s idyllic “Donna Reed Show”. He also shared the upstairs bathroom with his ‘sister’ Mary, Shelly Fabares, she who invented the tight cashmere sweater.

Following the success of TV turning Ozzie and Harriet’s son Ricky (Nelson) into a teenage singing idol, Donna’s real-life husband/producer of the show Tony Owen convinced both Shelly and Paul that they could sing. They were terrified, but he insisted. The result? Shelly’s #1 hit ‘Johnny Angel’, and Paul’s ‘She Can’t Find Her Keys’ and the iconic anthem of filial devotion, ‘My Dad’.

Model II: Just drop by when it’s convenient to, but be sure and call before you do. 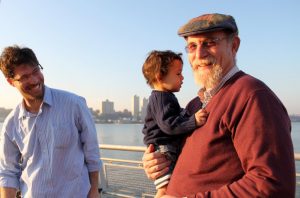 I engendered in my son a predilection for orange juice, a Van Dyke beard, and an appreciation of Randy Newman’s first album. His favorite? ‘So Long, Dad’:

Come and see us, Poppa, when you can
There’ll always be a place for my old man.
Just drop by when it’s convenient to
Be sure and call before you do.

Okay, it’s not Koby Nahmias, but he invited me to come whenever I want, didn’t he?

Model III: Welcome back to that same old place that you laughed about

A lot of energy has been invested over the years by those who know and love N speculating on his motives (not to mention his whereabouts). It’s a fruitless labor. He remains a sweet, eccentric, unique enigma. 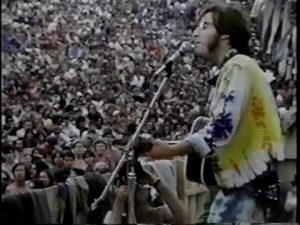 Perhaps I’ll just resort to my internal data base’s default  Coming Home song, John Sebastian’s ‘Welcome Back’. It may not tell the whole story, but it sure reflects one aspect of my feelings and thoughts.

John (b. 1944) was of course the founder and leading force of The Lovin’ Spoonful (‘Do You Believe in Magic’, ‘Daydream’, ‘Summer in the City’, as well as another score of stunning pop poems). He’s always been one of my favorite artists. He was a pioneer of American rock (see SoTW 052, ‘Girl, Beautiful Girl’) and a major force in the rock world (he turned down an invitation to join Crosby, Stills, Nash and Sebastian). He’s one of the wittiest lyricists to come out of the world of rock (‘I could feel I could say what I want, I could nudge her and call her my confidante’). He’s an artist of sensitivity, depth and wisdom (see SoTW 098, ‘Younger Generation’).

He’s also a real mensch. At least his persona in his music is, and I’ve never heard anything to the contrary about him as a person.

Sebastian left The Spoonful in 1968, made a memorable spontaneous appearance at Woodstock in 1969, and released an uneven solo debut album in 1970, with help from friends and a few great songs (‘She’s a Lady’, ‘You’re a Big Boy Now’, ‘How Have You Been’).  But he got mired in contractual disputes, and his solo career has been one long downward spiral commercially. Fear not, John made a nice living investing in real estate, and seems to have followed a path of playing the kind of Jug Band and New Acoustic music that he loves.

In 1975, ABC was making a new sitcom tentatively entitled “Kotter”, about a former Sweathog (the remedial class in a lower-class Brooklyn high school) who returns to teach at the selfsame school, trying to try to rehabilitate the current class of idiots, led by Horshack, Boom Boom Washington, Juan Epstein, and Vinnie Barbarino (John Travolta’s breakout role). 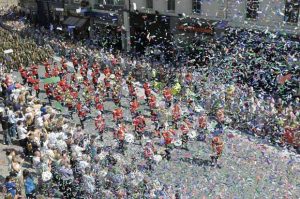 Sebastian was invited to write a theme song, and the producers liked it so much they renamed the show “Welcome Back Kotter”. The single went to #1. It was Sebastian’s swan song, but has occupied a warm and tender spot in my heart and that of many a nostalg, as only a Sebastian song can do.

The song even inspired a rap version. And while I’m here, I’m happy to have the opportunity to give a shout for the one other fine song in the album, ‘She’s Funny’, a charming, disarming paean to his lady’s sense of humor.

Every week for five seasons “Welcome Back, Kotter” had a happy ending. But life, Virginia, isn’t a sitcom. Coming back now after seeing The Big World (I mean that literally—the tales of N’s hair-raising and exotic odysseys may someday be told), I know the lad’s going to have a reality bath back in the old neighborhood. I do hope it’s a warm one.

Time will tell. Life, with its inevitable twists and turns, is never as simple as a Hollywood sitcom. But one thing I do know: when they tumble off that plane, all seven of them, they’re going to be welcomed back with the warmest embrace in this whole wide world.