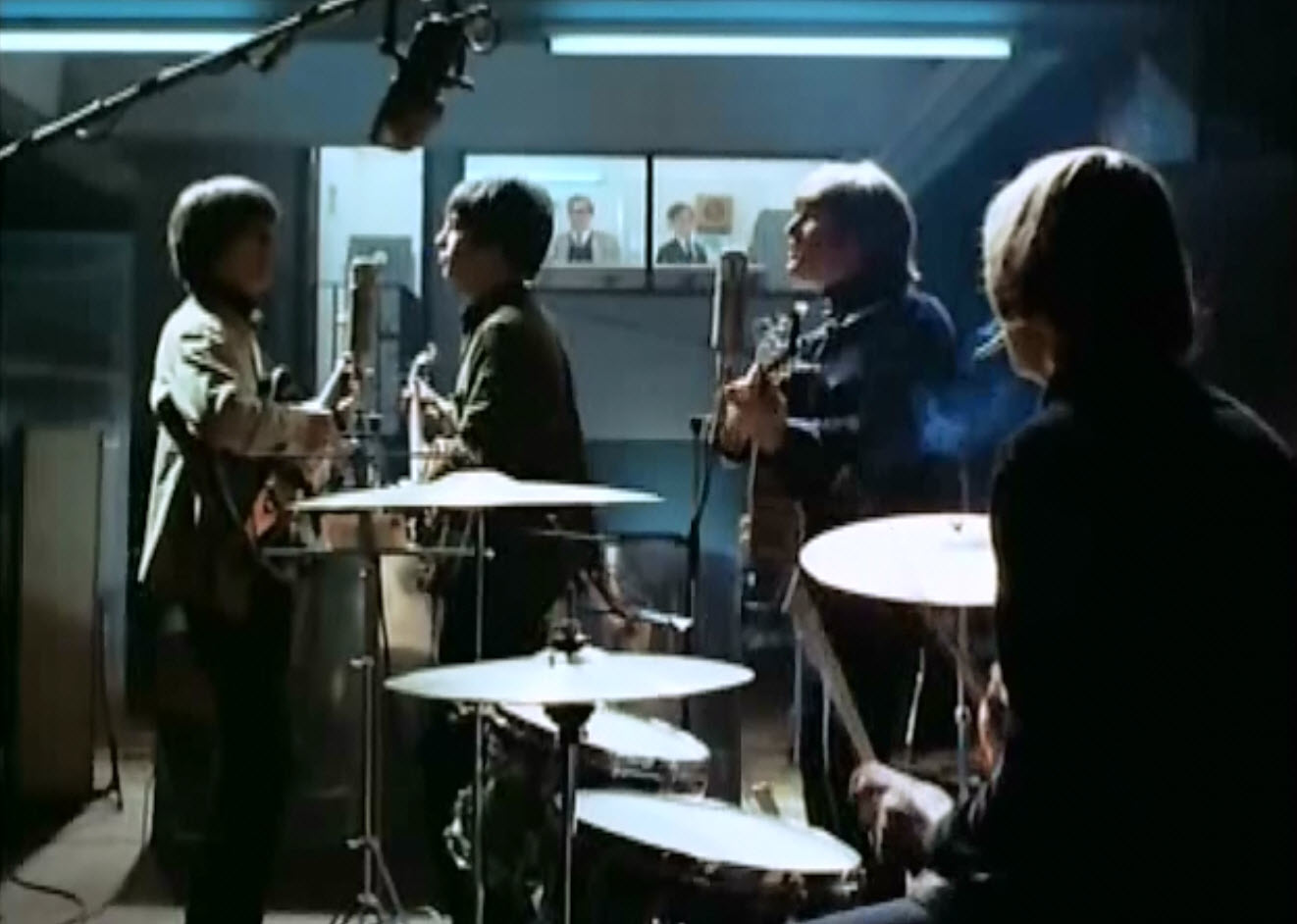 The Beatles — ‘You’re Gonna Lose That Girl’ (video from the movie “Help!”)
If that link doesn’t work, try this one.  Or this one.
Apologies for the visual jamming. Some corporations don’t want you to enjoy this music.

The plague. Time to contemplate. What is the meaning of life? Are the zombies really coming to eat me? When am I going to be able to buy a new battery for my watch? 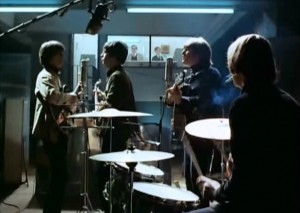 These are some of the existential conundrums I’ve been thinking about while staring at the same four walls. One might think I’d have figured out something of significance during that time, something about the universe, or at least about my own navel. One would be wrong. With each passing year, each passing decade, I get cluelesser and cluelesser.

The only thing I have picked up on is I am what I am. Now, there’s a piece of profound drivel for you. I mean that I have succeeded in detecting some patterns in my behaviors and predilections, and as an orthodox believer in reality, I’ve come to the conclusion that I’d better get used to what I am, because it ain’t gonna change. 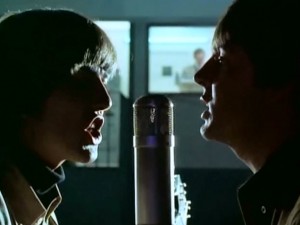 My clothes range from solid boring blue to solid boring brown. My best friends say I’m droll and humorless. I shout only when I accidentally cause myself physical pain.

And in music as well, I like the stripped down. In classical music, always chamber, never symphonic. I like to hear exactly what I’m hearing. In rock, acoustic. I hate double-tracked vocals and rattling, obfuscating cymbals. Look me in the eye and give me what you got.

Here, let me show you what I mean. These are my two favorite musical videos–Rick Danko of The Band singing the divine ‘Unfaithful Servant’ and Luciana Souza singing Naftali Neruda’s ‘Sonnet 49’. Unadorned, restrained, straightforward. Glitzless. Pristine and perfect. And here’s another one (significantly more fun if you can find a clean copy of it, such as  – The Beatles singing ‘You’re Gonna Lose That Girl’ from “Help!”. 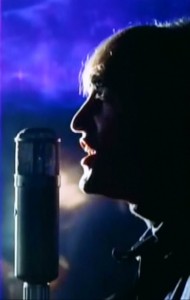 I recently rewatched The Beatles’ movie “Help!” I probably saw it twice when it was released in the summer of 1965. It was of course a tremendous letdown after “Hard Day’s Night”–unfocused, humorless, self-indulgent, flat. Still, I waited a couple of months after it was released to go see it. I wasn’t going to put myself in a movie theater with all those screaming girls. But I hadn’t seen it since.

I’ve been practicing my snobbism for a long time. I didn’t even apply for tickets when The Beatles came to town (you sent in a check for $24 for two tickets and crossed your fingers). My friend Andy called me that morning of August 21, 1966 to tell me his little sister was sick, would I like her ticket? Well, if it’s already being shoved in my face… (By the way, it was hot, sticky and full of screaming adolescent girls, annoying more than epiphanous. I probably went home and listened to “Yesterday and Today” on my headphones.) 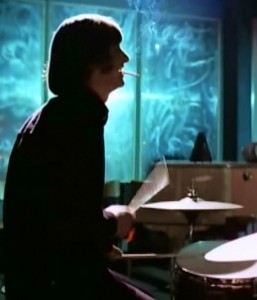 The “Help!” sessions included both upbeat electric cuts (Paul’s ‘The Night Before’, ‘Another Girl’; John’s ‘Ticket to Ride’). John’s ‘Help!’ was unfortunately upbeated and electrified – he later expressed regret at that – a rare Beatles misinterpretation of their own material (the other notable example being ‘In My Life’). But one must remember that popular music of the day rarely strayed from boy-meets-girl, and ‘Help!’ was perceived at the time as Revolution #1, a harbinger of The World, It Is A-Changin’, a (whisper the word furtively) protest! ‘You’ve Got to Hide Your Love Away’ was widely recognized as the first unabashedly Dylanesque Lennon song. 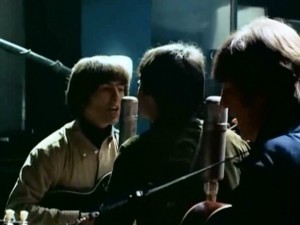 What else was on the album? Several more experiments in directions that later became genres. ‘I Need You’ was an early prototype for George’s Eastern journeys. ‘Act Naturally’, too easily dismissed as a trifle, was in fact a groundbreaking homage to Nashville; a step later came ‘What Goes On’, “Nashville Skyline” just a couple of steps beyond that. The monolithic ‘Yesterday’. Whatever The Beatles of early 1965 touched turned not just to gold. Each cut became a template for music as it is still being made half a century later.

But me, of course, I gotta get weird about it all. Rather than all those myths-as-they’re-being-recorded, I will by default choose to listen to ‘It’s Only Love’ and ‘I’ve Just Seen a Face’, the two cuts that were saved in American for “Rubber Soul”, which for my two cents is a more natural environment, the place they really belong. 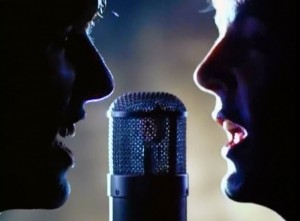 For me, the song that most represents “Help!”, the natural apex of the first incarnation of the Beatles, ‘You’re Gonna Lose That Girl’. I think it almost slips unnoticed among all those flashier jewels. It’s the culmination of everything that went before it – from ‘Please, Please Me’ to ‘A Hard Day’s Night’ to ‘I Feel Fine’.

There’s nothing unique about ‘You’re Gonna Lose That Girl’ (except that Ringo plays bongos and the intro is an ear-gnashing eighth tone lower than the body of the song). It’s merely the perfect early Beatles song. Stretching a point, it’s the perfect place for rock and roll to end and Rock to begin.

So when I recently rewatched this clip of ‘You’re Gonna Lose That Girl’ from “Help!”, I realized I hadn’t really learned anything over those 50 years. I understand now exactly what I understood as a silly, snobbish 17-year old, exactly the same thing that a bejillion screaming 12-year old girls understood – that The Beatles were the coolest humans ever born, making the finest music of our times.