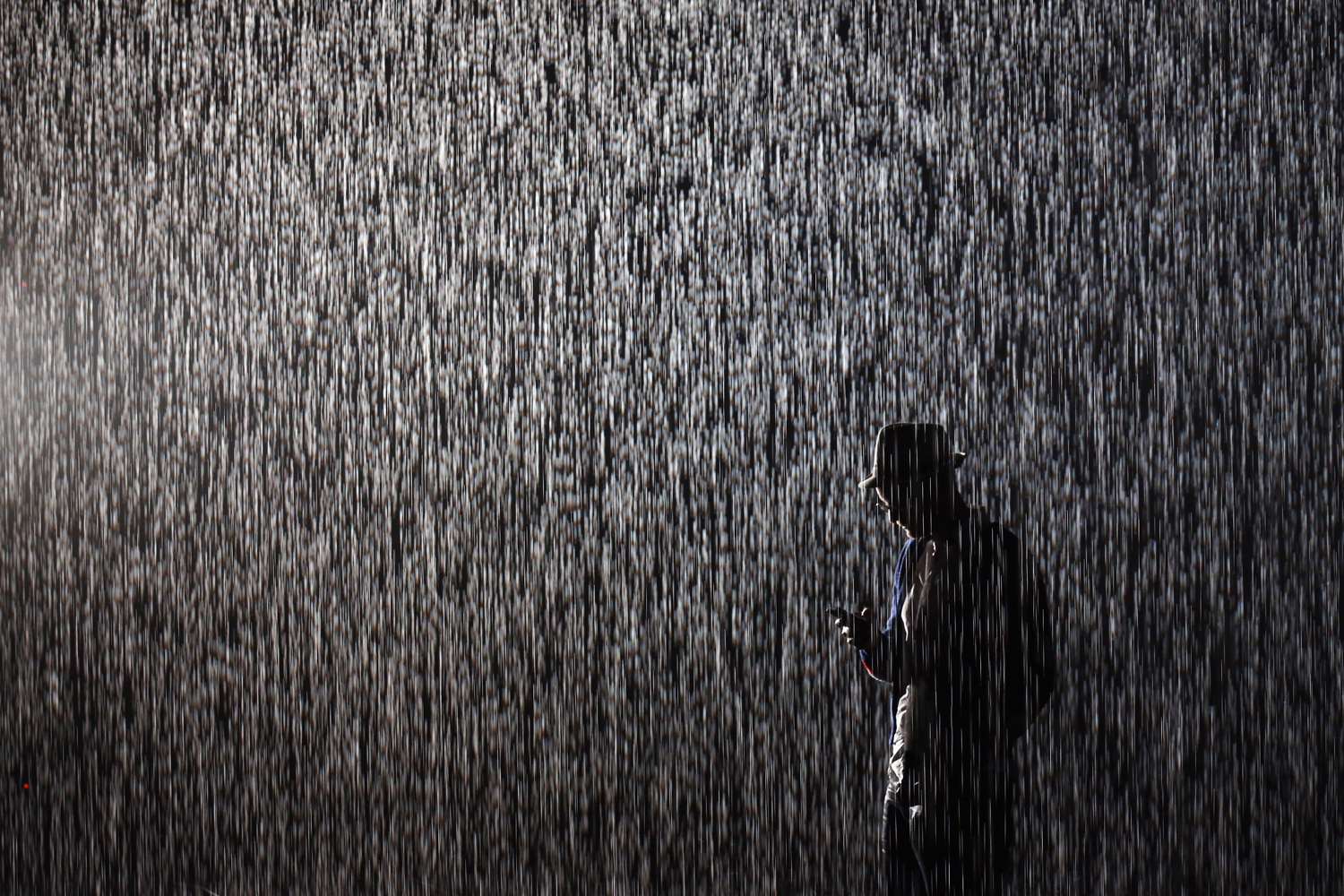 The Everly Brothers – ‘Crying in the Rain’ 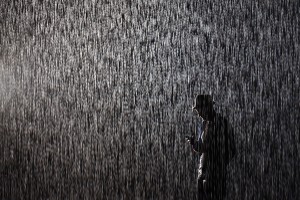 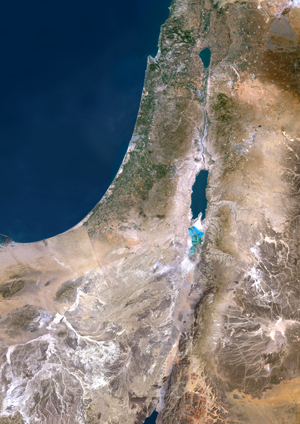 The people of our little country are even more diverse than the climates. I have friends here from Afghanistan to Zimbabwe, no exaggeration. But variegated as the terrain and the folk are, we all share one common concern—the water level of that pond. The pond is fed by the Jordan River and some less illustrious streams, but it mostly depends on rainfall. But we’ve had seven years of drought, and the water level has been dropping dangerously. We’re a people who like to drink water and bathe, and even wash our cars and water our lawns on occasion. Well, the government put a stop to that (watering lawns, not drinking and bathing—yet).

Rain usually falls here only in the winter (December–March), and the entire population has been hoping and/or praying for a lot of it. Because, as I said, we like to drink and bathe and flush the toilet, and we have no other source. Lots of our neighbors have a surplus, but they would rather see us dry up than sell us any. So we root for the skies. Go, God! 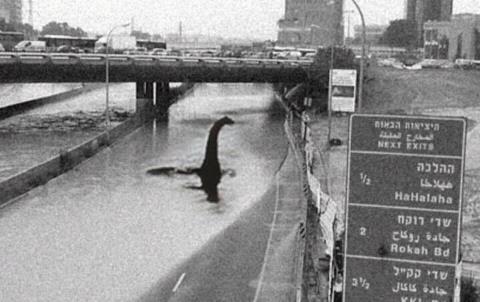 Three weeks ago we had a veritable rainstorm here (in local terms), an entire week of propitious precipitation. The trains closed down, poor neighborhoods flooded, the main artery in the main city was blocked. The country was paralyzed. And everyone celebrated. Because we really do like our water, and we have nowhere to get it other than from God and the desalinization plants that are being built. (God’s prices are much better.) A driver caught in The Jam as interviewed on the news:

”How long have you been stuck here?”
“Three hours.” (Looks at his watch.) “Three and a half.”
“You must be pretty upset.”
(Grinning, raising his eyes to the sky) “Are you kidding? This is great! A few days a year like this, who cares? We need it. Let it rain!!” 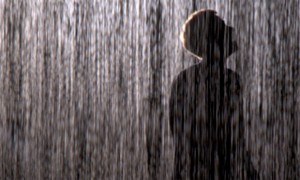 There was a holiday mood throughout the country, a celebration of rain, a groundswell of appreciation for God’s beneficence. National elections were taking place, and no one gave a hoot. The rising level of The Sea was the lead headline, the elections below the fold. And now this week, another round. The media are full of National Pond Water Level graphs and Annual Rainfall tables.

Which brings us to the music. Rain and soppy songs, how well they go together. Our challenge for Song of The Week is to find The Quintessential Rain Song. No, not ‘Singing in the Rain’, dummy. A Rain Song is all about melancholy, a downcast  heart, soggy shoes, sloppy self-indulgent adolescent depression. Yeah, I know, there’s a myriad number of ways to feel about rain and an equal number of songs. I’m talking about the essence of that wet stuff. You can feel any way you want, going in. Love, national pride, it don’t matter. “Snap out of it” just doesn’t work. The essence of rain is grey and the blues. 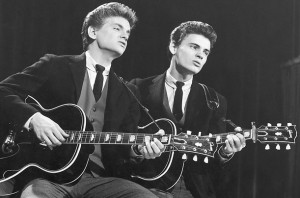 So in my quest for the grail of The Perfect Rain Song, I ran a search on my music directory and came up with over 500 hits, and another bunch from my analog grey-matter data base.

‘Train’ doesn’t count (strangely I found no songs about a train in the rain). Neither do ‘Rainbow’ songs (a plethora). Knock out all the happy ones, from ‘Singing in the Rain’ to ‘Bus Stop’ to John Sebastian’s ‘Rain on the Roof’ (oh, I love that song so much) to ‘Soon It’s Gonna Rain’ from The Fantasticks.

Right off the bat, I see a couple of great songs about rain that really aren’t Rain Songs – most prominently Buddy Holly’s ‘Raining in My Heart’ (“The weatherman says ‘Clear today’”) and The Beatles’ monolithic ‘Rain’. Out go the Dead’s ‘Box of Rain’, ‘MacArthur Park’, the Rolling Stones’ salacious ‘Rain Fall Down’.

Two masterpieces get dropped because they’re too serious (I hope you’re grasping the logic of the criteria): Randy Newman’s ‘I Think It’s Going to Rain Today’ (see SoTW 85), and ‘Fire and Rain’.

Regretfully, we also have to reject Peter Paul & Mary’s surprisingly dark (and very funny), ‘It’s Raining’. Oh, yeah, a nursery rhyme: ‘Ladybug, ladybug, fly away home – your house is on fire, and your children, they will burn.’

Dylan a priori lacks the soppy, soggy sentimentality, so out with such gems as ‘Buckets of Rain’, ‘It’s a Hard Rain’s A-Gonna Fall’, ‘Rainy Day Women’, ‘Percy’s Song’ (and its folk source ‘The Dreadful Wind and Rain’). 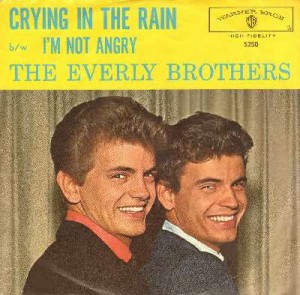 We’re even going to veto one of the most exquisitely painful songs we know, James Taylor’s ‘Rainy Day Man’ because it’s just too good. The Rain Song is about depression, not about existential angst. Here’s the perfect version from his first (Apple, 1968) album, here’s the revisit from “Flag” (1979), here from a bootleg performance with Joni Mitchell circa 1971. Here’s a fine 1971 video to chill you on a warm day.

I’m sure by now you understand that a real Rain Song has to be about clouds and eyes and crying and tears. So here it comes, the finalists in our unreality competition for the mantle of The Quintessential Rain Song

#7 – ‘Cry Like a Rainy Day‘, Etta James. A bit slick for my tastes, from a distinctly unslick singer.

#6 – ‘Blue Eyes Crying in the Rain’, Willy Nelson. Yeah, it’s a nice song. It meets all the prerequisites. But there are those where the heart is more fully saturated.

#5 – ‘Cry Like a Rainstorm’, sung by Linda Ronstadt, written by Eric Kaz. Lots of violins, and she can really hit those high notes.

#4 – ‘It Might As Well Rain Until September’, 1962, young Carole King’s first solo release, back when she was churning out Brill Building hits. You can read all about it in its very own Song of The Week.

#3 – ‘Early Morning Rain’, written by Gordon Lightfoot, as performed by Peter Paul & Mary. One of my very favorite emotionally sodden songs. It also had its own Song of The Week.

#2 – ‘Raindrops’ by Dee Clark, a one-hit wonder from 1961. I was in the 8th grade, miserable, in the rainy Midwest, and I sure shed a lot of tears to this one. Check out the power soul wailing at the fade. Dee spent the last years of his short life in a welfare hotel in Toccoa, Georgia, impoverished and paralyzed by a stroke. So what was I doing, a Jewish boy, crying in the suburbs?

The envelope, please. Ladies and Gentlemen, the ultimate song of unrequited love and waterlogged self-pity:

#1 – ‘Crying in the Rain’, the Everly Brothers, music by Carole King, lyrics by Howard Greenfield. 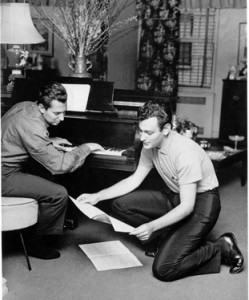 Carole King’s corpus needs no elaboration. Howie grew up in Brighton Beach, in the same building with Neil Sedaka. He co-wrote such Brill Building gems as ‘Breaking Up Is Hard to Do’, ’Oh! Carol’, ‘Stairway to Heaven’, ‘Calendar Girl’, ‘Little Devil’, and ‘Happy Birthday Sweet Sixteen’ for Neil; ‘Everybody’s Somebody’s Fool’ and ‘Breakin’ in a Brand New Broken Heart’ (Connie Francis); ‘Love Will Keep Us Together’(The Captain & Tennille); ‘Venus In Blue Jeans’ (Jimmy Clanton); and ‘Foolish Little Girl’ (the Shirelles)., not to mention the theme songs to Bewitched, The Flying Nun and Hazel.

Don and Phil Everly, of course, are charter members of the pantheon of rock and roll. Their career split into two – recording for Cadence Records in 1957-1959 songs written by husband-and-wife team Felice and Boudleaux Bryant (‘Bye Bye Love’, ‘Wake Up Little Susie,’ ‘All I Have to Do Is Dream’–SoTW 186, ‘Bird Dog’ and ‘Problems’), and then songs from a variety of sources in 1960-1962 for Warner Brothers (‘Cathy’s Clown’, ‘So Sad‘, ‘Walk Right Back’, ‘Crying In The Rain’, ‘That’s Old Fashioned’, and ‘When Will I Be Loved’. My, my, what a body of work. You can read all about them in their own dedicated SoTW here.

Not even a duo such as Art Garfunkel and James Taylor could match the Everly’s performance. And that’s saying something, because James has been known to rival them at their own game (here’s the Everly’s ‘Devoted to You’; here’s the treatment by James and then-wife Carly Simon). 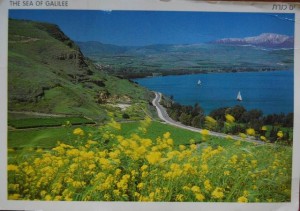 Pretty as a picture postcard

But no one can beat the Everly Brothers. Simon and Garfunkel admitted to striving to be Everly ver. 2.0. The first time I heard a Beatles song (‘I Want to Hold Your Hand’) on the radio, sometime in late 1963, way before their appearance on the Ed Sullivan Show, I said to myself, “What’s the big deal? They sound like the Everly Brothers with a heavier beat.” Neil Young, inducting them into the Rock and Roll Hall of fame, said that every musical group he belonged to had tried and failed to copy the Everly Brothers’ harmonies.

‘Crying in the Rain’ the perfect soggy, squishy rain song. It’s a pretty perfect song for any season. You just put the needle down on that 45 with the big hole, it brings its own weather system. All the heartache, all the sogginess, all the rain mixed with all the tears. I think we could even declare it as a genre unto itself: ‘Crying In The Rain Songs’. And here’s the best of the bunch.

Tags: Crying in the RainEverly Brothers