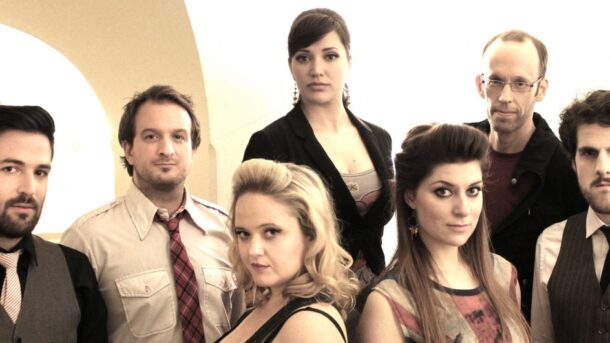 The Swingle Singers – ‘Sinfonia from Partita No. 2 in C Minor’ 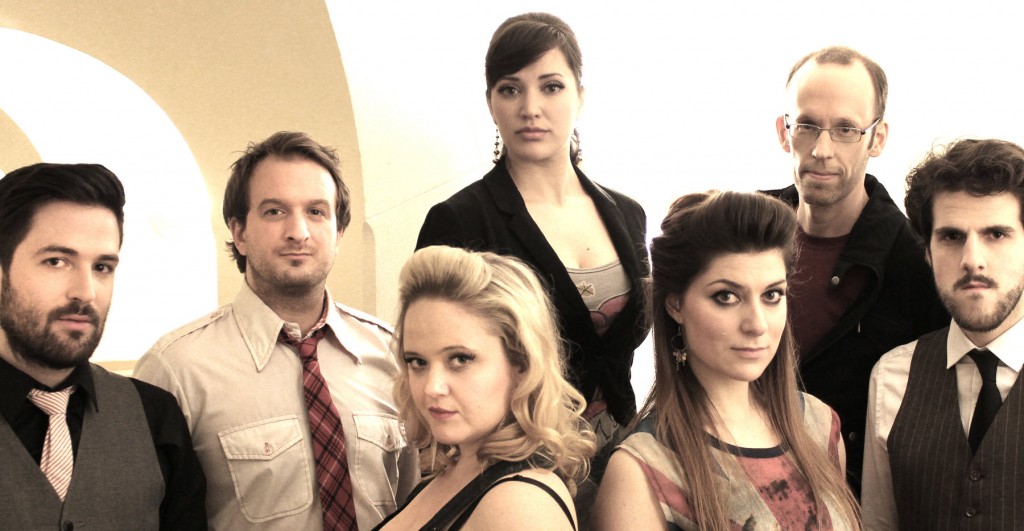 I had the great pleasure last week of hanging out with The Swingle Singers. They were coming to our little corner of the globe for a couple of concerts, and graciously agreed to give a workshop for the growing local a cappella community. Both the workshop and the concert were knockouts, and I highly recommend you following their tour calendar and trying to catch them the next time they’re in your neighborhood. Here’s what they look and sound like today. Ain’t no one who won’t enjoy them, from the most casual listener to the most effete snob. 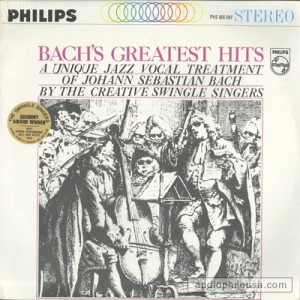 I wrote at some length in SoTW 139 about the history of the Swingle Swingers, the context in which they sprouted, the path they’ve traveled, and especially where they are today. In short, the original Swingle Singers were formed in 1963 in Paris under the direction of Ward Swingle singing Bach instrumental scores in eight voices with a jazz bass and drum accompaniment. They disbanded after a successful decade, and Ward regrouped in London. This new incarnation worked for the next thirthysomething years, into our current century, as an evolving a cappella group performing technically polished treatments of a standard range of folk, pop, classical and traditional music. In recent years they’ve become associated with the “contemporary a cappella” movement, which I’ve written about extensively, becoming a world leader in this burgeoning cult. 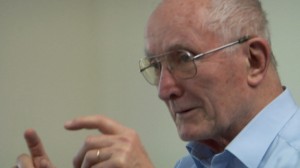 They’re creating new and exciting music, and they’ve just begun. They’re planning on recording a lot of new material for their 50th anniversary, and judging by the two samples from their recent concert, some new ground is about to be broken. One very impressive piece featured a fluid harmonic center gliding between keys while being driven by a programmatic rhythmic scheme. Bartok would sit up and listen intently. The other began with the bass creating a beatboxing backing loop, then added Billie Holiday’s vocal track from ‘Don’t Explain’ isolated from its backing and run through a compressor/limiter and distorted, à la ‘Tomorrow Never Knows’!! Then the group overlays this potpourri with a demure choral ‘accompaniment’ overriding Lady Day. Say wa?? 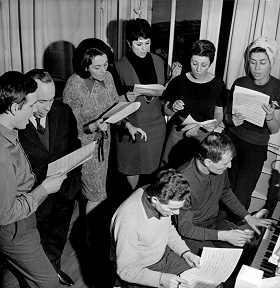 Clare Wheeler, the very talented arranger and alto of the group, told me that for much of their audience, ‘The Swingle Singers’ means singing Bach in a jazz setting. But for her and all the current Swingles, it means creating new, innovative, interesting music. Just like Ward Swingle did fifty years ago, when he pretty much invented the mindset of crossover and opened up the music world to the potential of classical music in popular contexts,  vocal jazz and so much more. In fact, she told me, the 86-year old Ward Swingle heartily approves of ‘the new stuff’ and encourages the youngsters to pursue new directions rather than slavishly copying the original Swingle music.

“For him, The Swingle Singers is about being innovative. We see ourselves as a band, striving to create good music, not a party trick slavishly adhering to a principle such as doing everything strictly a cappella.” 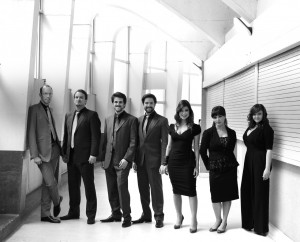 I loved hearing that, and was encouraging Clare to be bold and continue taking bold chances, because they’re a hip, young, fun group of musicians. But they also carry that name, and with it a mantle of noblesse oblige and the aura of that great, groundbreaking music that I was singing twenty years before any of the current Swingles was born.

So I sheepishly asked them if they knew my very favorite piece from one of my very favorite albums, the ‘Sinfonia from Partita No.2 in C Minor, BWV 826’ from the very original “Bach’s Greatest Hits”. ‘Sure’, they said, ‘it’s still in our repertoire, but we haven’t sung it since Ward’s party a few years ago.’ Wow. I sure would get a kick out of hearing Clare and Jo and CJ and Kevin and Oliver and Ed singing that ‘Sinfonia’, with Sara singing that crazy, divine virtuoso lead which will forever be one of my very favorite pieces of music.

It begins with a formal choral introduction, then launches into an extended scat solo that makes you wonder what Johann was smoking back there behind the chapel organ. That’s followed by a long polyphonic fade (actually if you look at the score it’s only two voices, but in Bach’s hands that sounds like twenty.) I’ve listened to it some three trillion times, and I can sing about 80% of the notes. Not that it’s challenging music or anything. 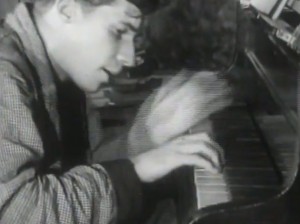 Just to start off on solid ground, here it is by my favorite babushka, Tatyana Nikolayeva.

And here’s the piece by our favorite Canadian whacko, Mr Glenn Gould. It’s actually pretty restrained for him. But if you want to witness the madness lurking beneath that veneer of respectability, check out this clip of Glenn Gould practicing the Sinfonia.It’s not recommended for children or those weak of constitution. You might want to fasten your seatbelt and take a valium before watching this one. 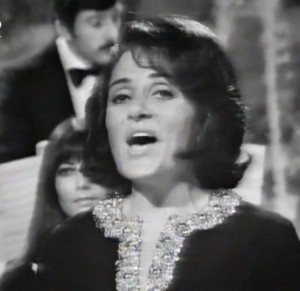 And here’s the ‘original’ recording, the one I’ve been unsuccessfully trying to sing along with for fifty years, longer than these seven whippersnapper Swingles have been swingling combined. What do they know? Well, they’re lovely people and fine musicians, tall singers on the shoulders of giants. They actually know quite a lot, and I’m looking forward to them showing more. But nothing can alter the lifelong love affair I’ve had with the original Swingle Singers, 1963, singing ‘Sinfonia from Partita No.2 in C Minor, BWV 826’.