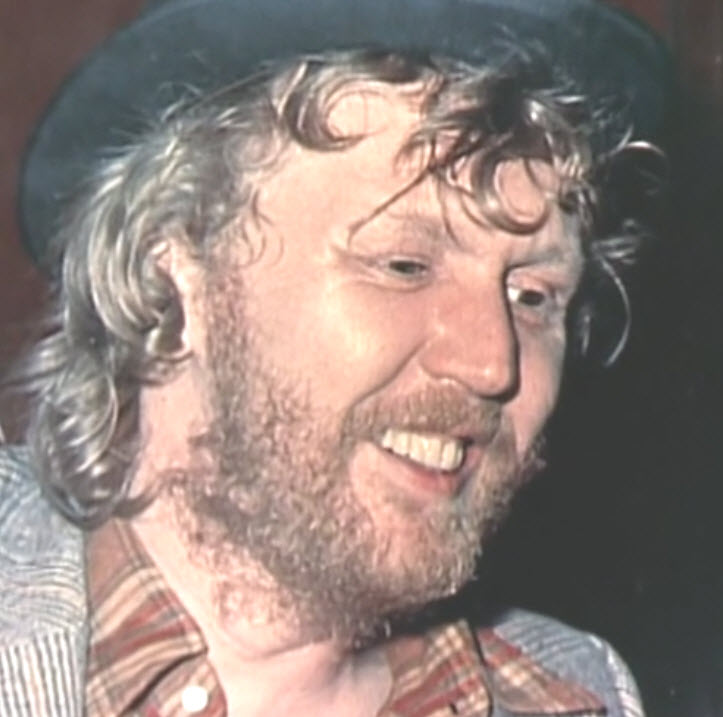 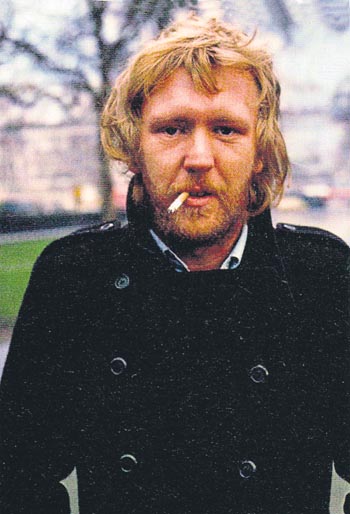 Nilsson, Part II. If the story of last week’s SoTW was Harry Nilsson’s meteoric rise and his storybook embrace by the Beatles, this week it’s his seismic collapse and tragic self-destruction.

Let’s try to impose some chronology on this very chaotic life. When we saw Harry last week, he’d made his 1967 debut album, “Pandemonium Shadow Show”. Then he had his big hit song ‘Everybody’s Talking’ from “Midnight Cowboy”. Then in 1968 and 1969 his two best albums, “Ariel Ballet” and “Harry”. Then in 1970 a critically successful co0mmercially flop album of covers of a weird, unknown young songwriter, “Nilsson Sings Newman”.

Then he went to England, began to hang out with the recently ex-Beatled John Lennon, and in the words of his best friends, “he changed”. He fired his producer by telegram and never saw him again. He became what one friend called “a big bunny with sharp teeth.”

He refused to perform live, refused to tour, thereby dooming his career to very limited success. 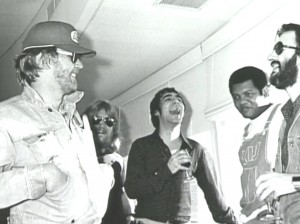 For the rest of the 1970s he embarked on a career of self-destructive carousing that sucked into its vortex such luminaries as John Lennon, Ringo Starr, Robin Williams and Mickey Dolenz. As each one recalls laughingly, you’d be living your life innocently, out of the blue would come “The Harry Call”, and you’d wake up three days later in a whorehouse in Albuquerque with no recollection of how you got there. During this time Nilsson recorded three relatively successful but artistically spotty albums, “Nilsson Schmilsson”, “Son of Schmilsson”, and “A Little Touch of Schmilsson in the Night”. 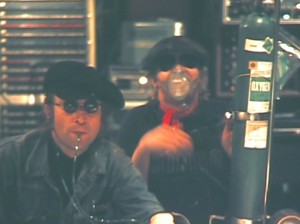 John called his 18-month separation from Yoko his “Lost Weekend”, with Harry his chief partner in crime. Nightclub high points include being ejected for heckling their buddies The Smothers Brothers and John fighting with a waitress with a used sanitary napkin tied to his forehead. Then Harry and John moved the debauchery into the studio and recorded “Pussy Cats” during which they had a screaming contest. According to witnesses, there was blood on the microphones.

According to their wives (Una and Yoko), their friendship had a lot to do with the fact that both were abandoned by their fathers as young children and then later by their dysfunctional mothers. On his 1967 album, Harry described in his song ‘1941’ the father’s leaving, and then imagined the son growing up and in 1964 abandoning his own son in the same way. In 1969, Harry married, had a son, and “walked right out the door”. 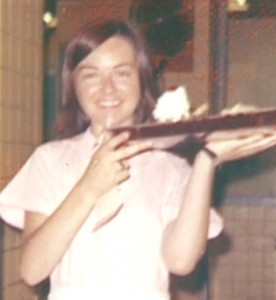 But he was a man of infinite contradictions. One Sunday night in the mid 70s, he walked into an ice cream parlor in Manhattan drunk on brandy, and saw Una, a 19-year old Irish exchange student. He looked at her, said, “You have the most beautiful eyes I’ve ever seen. Will you marry me?” She did, they had six children, and he remained a devoted family man for the rest of his short life. 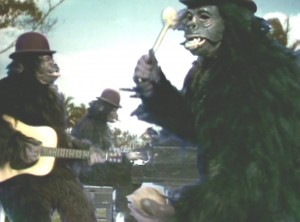 When John was murdered in 1980, Nilsson devoted years to anti-firearm activism, but his musical career was effectively finished. He lost all his money to his manager, and died at 53. But he did leave a rich if erratic musical legacy. I need to pick a Song of The Week, and I confess I’m having trouble. There are many fine ones from 1968-71, but not one encompasses his frazzled life or fragmented discography.

Perhaps Nilsson’s finest moment is the improvised half-hour BBC studio ‘concert’ he made in 1972 (Part 1 and Part 2). Having been assured he could do it without a real audience, he went into the studio with a piano and guitar and made it up as he went along, just as he did his life. Songs of great seriousness merge into the ludicrous. Check out the non-transition from last week’s SoTW ‘Without Her’ to him multitracking ‘Coconut’, portraying three very funny gorillas. No transition: the sublime, naked vulnerable Harry brutally juxtaposed with the hokey, jokey Nilsson. Just like his life.  On the one hand, it has the seriousness of a bunch of stoned 16-year olds goofing around with cameras and instruments. On the other, check out how he creates a unifying theme of the audience not applauding to systematically undercut his own seriousness. But I need to pick one song. 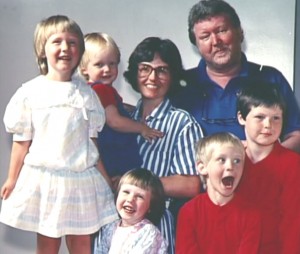 We could pick one of the many fine songs from “Harry”, of which there are many. Such as ‘Open Your Window’, a marvel of a jazz qua pop vocal virtuosity. Or ‘Rainmaker’, a folk myth he wrote himself, a song which wouldn’t have been out of place on an early album by The Band (that’s about the highest praise I can give). Or ‘Mr Bojangles’, his lovely cover of the beautiful Jerry Jeff Walker song ‘Mr Bojangles’ (covered by Nina Simone, Bob Dylan, the Nitty Gritty Dirt Band, Sammy Davis and Robbie Williams, among many others). Nilsson’s cover was the first and by far the best.

Or ‘The Puppy Song’, a whimsical treatise on innocence and reality, on the way the world is and the way you’d like it to be: “Dreams are nothing more than wishes, and a wish is just a dream you wish to come true.” Or we could pick ‘I Guess the Lord Must Live in New York City’, the song he composed as a theme for “Midnight Cowboy.” His song was rejected, as was Randy Newman’s ‘Cowboy’ (here in the original version from Randy’s first album, here Nilsson’s version from “Nilsson Sings Newman”). There are stories that both Bob Dylan’s ‘Lay Lady Lay’ and an unnamed song by Joni Mitchell also lost out to ‘Everybody’s Talking’. 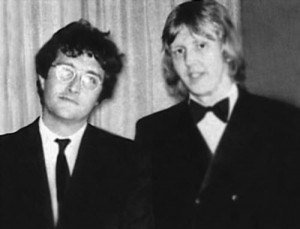 Or we could pick a song from “Nilsson Sings Newman”, Stereo Review’s 1970 album of the year, piano by Randy himself. It was probably the worst career choice Nilsson could have made at that point, recording an album of covers of a thoroughly unknown rival jazz/pop singer-songwriter, one even quirkier and with less mass appeal than Harry himself. Five of the ten songs are from Randy’s virtually unknown first album, a beloved and esteemed Desert Island pick of mine. In my mind, it’s a work of genius, incomparably original. Randy sings oblique, ironic, passionate songs with a growl that makes Dylan sound like Ella Fitzgerald, backed by a full orchestra filled with magic and muscle and mirth unlike any popular music. On the Nilsson album we get the same piano (by Newman) sans orchestra, and Harry’s unadulterated, angelic vocals. The irony has disappeared. Unless you listen to the songs and think about them. I prefer the original to the sweeter Nilsson versions, but they’re themselves so fine that they diminish the original not a whit. Check out Nilsson’s monumental ‘Love Story’ (vs Randy’s) or ‘Living Without You’ (vs Randy’s masterpiece, or the less-successful cover by wonderful, wonderful Luciana Souza). Or the indelible ‘Dayton, Ohio 1903’ (Nilsson’s, Randy’s). The irony is there; but you need a nuclear microscope to find it.

Or ‘Vine Street’, Newman’s depiction of The Day and The Music and The Girl and Everything. It begins with an imagined clip from a recording some friends made when they were young, then segues into ‘Vine Street’ itself: “That was me, third guitar. I wonder where the others are.” Someone who knows music and knows me once said that this in his mind this is the song that most conjures me in his mind. Randy never put it on a studio album, but here’s a demo version. Here’s the first recording of it, by the immortal Van Dyke Parks from his first album “Song Cycle”, Randy on piano. And here’s the version from “Nilsson Sings Newman“. I’m sure glad I don’t have to decide which of the three I like best. 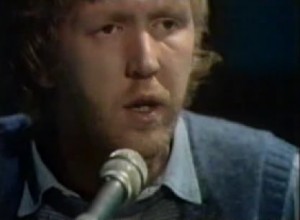 But we’re going to go for “Ariel Ballet”, Nilsson’s most satisfying album. It starts off with ‘Good Old Desk’ (“My old desk does an arabesque in the morning when I first arrive”), his paean to his desk, industriousness and routine. Al (“Al Kooper is God”) Kooper said, “I’m sure he influenced the Beatles as much as the Beatles influenced him.” ‘Good Old Desk’ testifies to that amply.

By the same token, we could pick as SoTW the lilting, perfectly constructed and performed bossa nova ‘The Wailing of the Willow’. Or his take on Beatles-fame, Nilsson-obscurity, and their fans growing old in ‘Mr. Richland’s Favorite Song’. Or, we have to admit, ‘Everybody’s Talking’. Really, almost any cut on this consistently fine album from this tragically inconsistent genius.

But we have to pick one, so let’s go with ‘One’ of Nilsson’s most famous songs due to a pretty silly cover version by Three Dog Night.  Know how he wrote it? He dialed the phone, got a busy tone, and while standing there listening wrote the song. Cello, bass, harpsichord, flute. Oh yes, and a busy signal. This isn’t the only song he’s written with a lot of word twists on a central theme. Check out ‘Joy’, for example. But this is the ‘One’ we all know and love and remember. Ladies and gentlemen, a not completely wasted genius of our era, Mr Harry Nilsson.

One is the number divided by two…