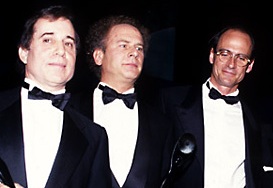 What happens when three of the finest and most successful singers of our times get together to record a pop paean to pimply passion? Well, when it’s James Taylor hooking up with Paul Simon and Art Garfunkel to sing “Don’t know much about no Rise and Fall, don’t know much about nothin’ at all”, it’s pretty darn memorable.

Paul and James had been friends since their teenage backpacking days circa 1966 as the two leading Americans in the nascent London folk scene. Fame snuck up on Paul while he was in London, when (unbeknownst to him) the acoustic ‘Sounds of Silence’ he had recorded with Art was overdubbed with electric guitars and drums, thereby inventing folk-rock. Meanwhile, James was hanging out with Peter Asher and becoming the first non-British artist signed by The Beatles’ Apple label.

If you don’t know what happened to James and Paul and Art in the late 1960s/early 1970s, you should probably be out mowing the lawn or watching Championship Bowling. 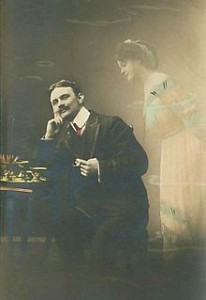 In late 1977, James got a call from his neighbor Paul, who was in a period of reconciliation with Art, who had provided backing vocals on James’ “In The Pocket” album the year before (the very fine ‘Captain Jim’s Drunken Dream’ and the sublime ‘A Junkie’s Lament’) the year before. Art had recorded an album of Jimmy Webb songs, “Watermark”, which was his best solo effort artistically but another commercial flop. It seems Paul was feeling sorry for his ex-, seeing how his own solo career was flourishing. So he called James, and the three of them convened in Paul’s apartment to record a song for belated addition to the already-released album.

In 1978, refashioning up-tempo rock songs into gentle ballads was nothing new—way back in the nascent years of rock and roll, Buddy Holly covered Little Richard’s raucous 1956 ‘Slippin’ and Slidin’’ twice, in a slow electric version and in an unreleased acoustic version.  (The Band and John Lennon also tried their respective hands at the song, albeit in the spirit of the original.) 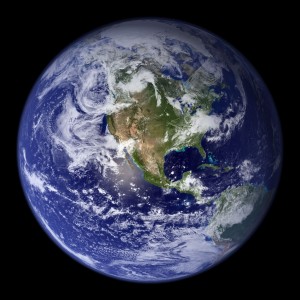 I’m assuming it was James who chose to record the Sam Cooke hit, ‘(What a) Wonderful World’. He had been reworking bouncy rock and roll standards in just the same acoustic, introspective, gentle mode to great success (his mega-hit ‘Handy Man’, a hit for Jimmy Jones in 1959; and his Carole King-penned ‘Up On The Roof’, a hit for The Drifters in 1962). In SoTW 112, we took a look at what James could do to Beatles songs such as ‘If I Needed Someone’ and ‘With a Little Help from My Friends’, not to mention the already-ballad ‘Yesterday’.

But whoever picked the song, it’s James’ vocals that invest it with such magic. One of the most common planks in the SoTW soapbox is just how fine an artist James Taylor is, and no matter how much of an icon he has become today, his artistry is loved more than understood or seriously appreciated. One of his many insufficiently appreciated talents is as a harmony singer. In my not-so-humble opinion, James and David Crosby stand head and shoulders above the field as harmonizers supreme. 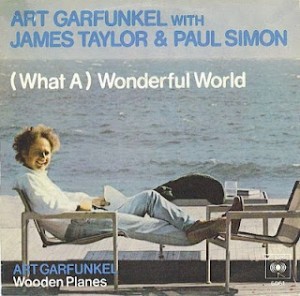 All the others, Art Garfunkel and Graham Nash and the Everlies included, go for the easy choices—adding a second voice a third or a fourth above the lead. James and Crosby have a penchant for adding subtle harmonies below the lead, where they unobtrusively add a depth and a resonance unique in the world of rock.

Take for example TS&G’s ‘Wonderful World’. In the second verse (‘Don’t know much about Geography’), S sings the lead with G singing a fourth above him. Just like in Simon and Garfunkel. It’s not a bad formula—they sold about three bazillion records that way. Contrast it with the introduction (TS&G) or the first verse (G singing lead, T harmonizing a minor third underneath him, then S adding a falsetto counterpart). Then listen to what happens in the second verse when JT joins in on ‘But I do know one and one is two’. Nothing more than the quantum shift from 2D to 3D. 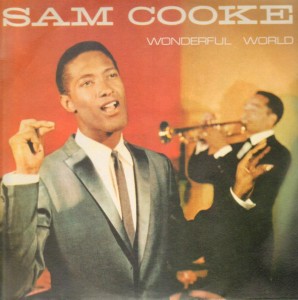 The choice of the song is no little win in and of itself. It was originally a hit (#12 in the US) for Sam Cooke in 1960, and  placed 373rd in Rolling Stone magazine’s 500 Greatest Songs of All Time. It was written by Lou Adler (producer of Cooke, The Mamas & the Papas, Barry McGuire, and Carole King, including her Tapestry album; former husband of Shelley Fabares; and Lakers’ courtside crony of Jack Nicholson), Herb Alpert (Mr. Tijuana Brass, producer of The Carpenters and  Sérgio Mendes, and the Broadway “Angels In America”, mogul and sculptor), with finishing touches by Sam Cooke himself. Lou Rawls sings backup on the original.

It is so irresistible that it’s been recycled more times than the number of ants on a Tennessee anthill:

And here are the wonderful lyrics to this whimsical, witty paean to mindless teenage love. I taught high school for 25 years. Believe me, every word of it is true:

Now I don’t claim to be an “A” student, but I’m trying to be.
I think that maybe by being an “A” student baby, I could win your love for me

Sam Cooke Songs of The Week

James Taylor Songs of The Week

Paul Simon Songs of The Week