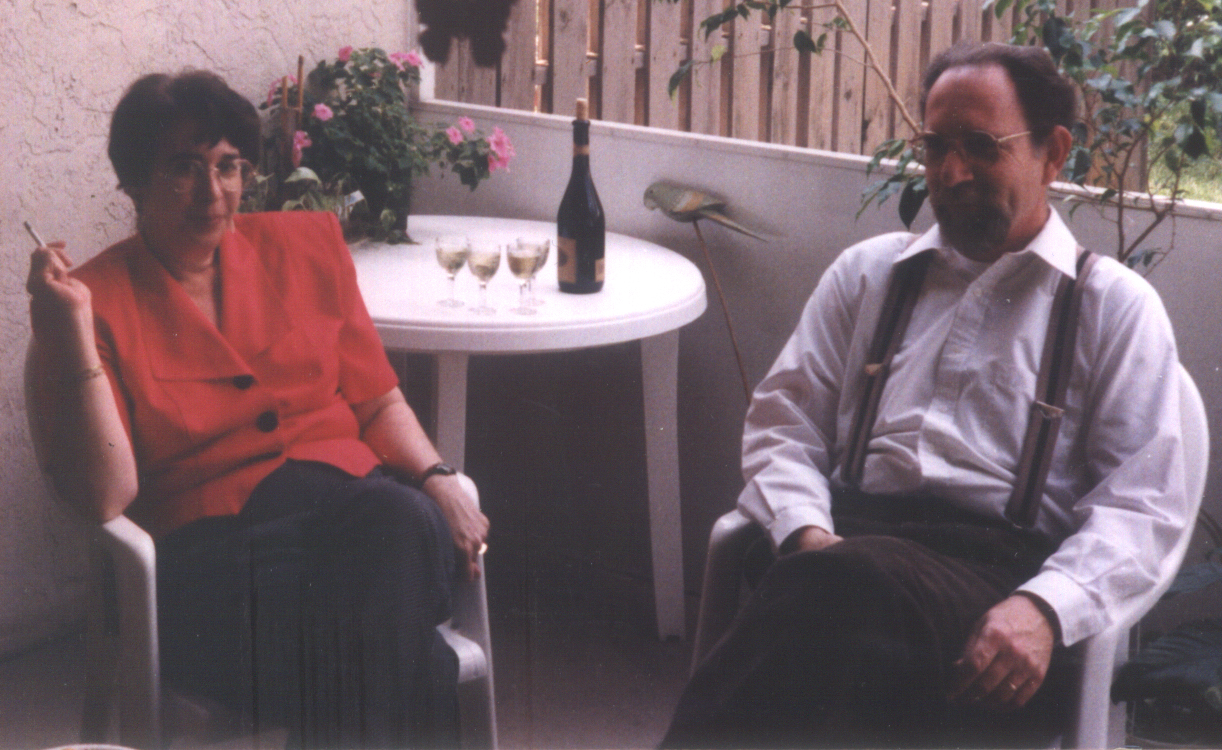 James Taylor, ‘Enough To Be On Your Way’

This week was the twelfth anniversary of my only sister’s death, at 62, from lung cancer. She was a denizen of Marlboro country all those years, and succumbed to statistics. Madie was five years older than me, and I loved her dearly. Never, not once in our entire lives, did we fight. Not when we were kids, not when we were adults. As youngsters, we had the age and sex differences to keep us apart, and a mutual enemy to keep us together. As adults, there was a literal ocean between us. From 21, when I left the US, for almost 30 years, I saw her only a few times for a few days each. We would talk on the phone for a short time a couple of times a year, and exchange only sporadic aerograms. 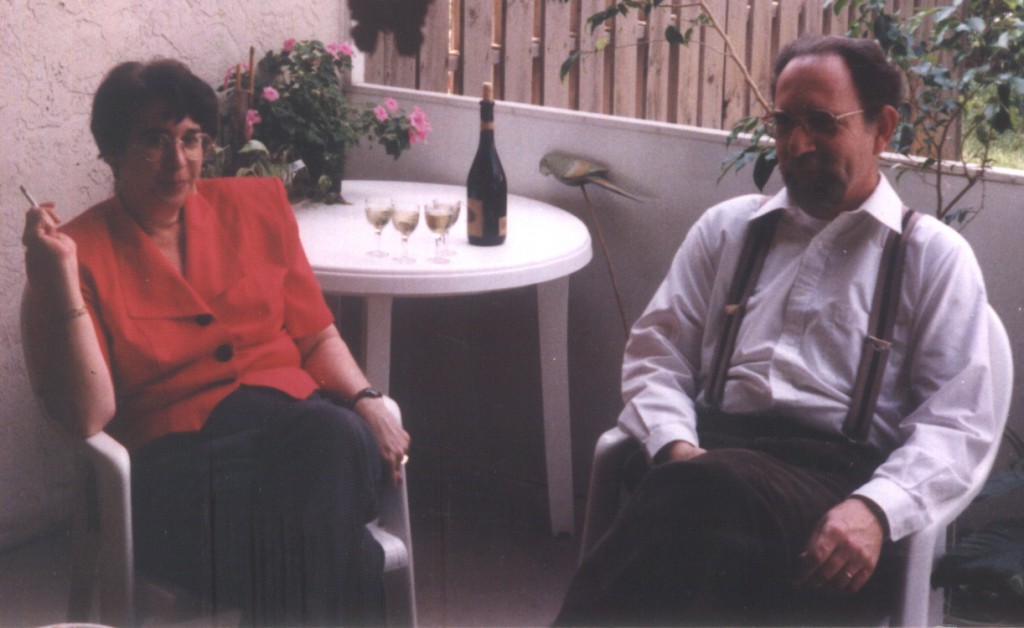 She never came here to visit me in the life I made for myself. For many years it was logistically and financially impractical, and then she got sick. But I understand that she really didn’t want to come, so strongly did she resent my having moved to “the other side of the world”. She loved me simply and deeply and purely, as I did her. She wanted me near her on occasion, in the hard times, in the good times, as she went through her life. But I had removed myself, and she never overcame the resentment of that fact.

Then our folks started getting old, finances and costs changed, and I began visiting every year or two. We’d usually meet in Florida for the best part of a week, without spouses, just the organic family of dinosaurs. She and I would hide out on our parents’ veranda. She’d smoke her Marlboros, and we’d open our hearts to each other.

It was only  long after she’d passed away that I came to understand how she missed me, because that’s how I still miss her. She was the one person to whom I could open up completely unguardedly – one quarter stranger on a plane, one quarter twin personality, one half unadulterated love. Life goes on, with all its blessings and curses, with all its joys and disappointments, with all its tribulations and trials. There’s so much I want to share with that one person in the world through whose veins flowed the same blood as mine. Madie’s absence is a gaping void in my soul.

There’s a song that I associate with my sister’s death. That statement demands some justification. My love for my sister is bigger than any pop song. I don’t equate the depth of my love for her, or my sadness over her absence with dropping a quarter in a juke box. But there’s no denying that that which comes through the car radio is the soundtrack of our lives, as surely as the violinists in a Hollywood tearjerker manipulate our heartstrings. A pop song is just a pop song, and a life is a life. But in our real lives, the two are intertwined, each person with his own background accompaniment. 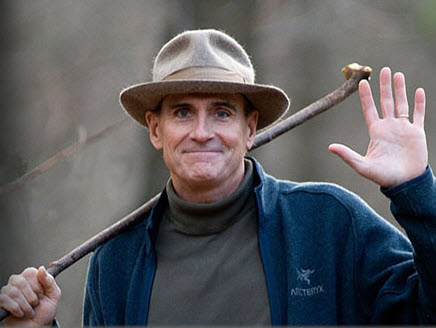 James Taylor is a few months older than me. I’ve been listening to him closely and attentively since we were 21. James was the second of five children of Trude and Ike Taylor. Ike was a patrician and a closet lush, dean of the Chapel Hill medical school who ran away on an expedition to Antarctica to stay drunk and avoid the real world. Alex Taylor was the firstborn of the five rebellious children, filling the role of convention-breaker and thus drawing the heaviest flack. James moved more comfortably into the role of singer-substance abuser after Alex had broken all the curfews. Alex named his firstborn after brother James, and James in turn wrote the swaddling nephew a lullaby called ‘Sweet Baby James’.  Alex himself was an unsuccessful singer, an accomplished drinker, rough and gruff and unsettled and loveable. In 1993, he died after sinking into a booze-induced coma. 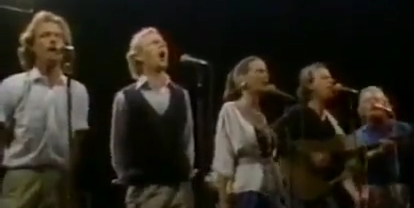 Here’s a wonderful clip of that “fucked-up family“, the five Taylors singing James’ great song ‘Shower the People’. “Shower the people you love with love.” Boy, triter and truer words were never spoken.

‘Enough To Be On Your Way’ is James’ lament for his brother. “My brother Alex died in ’93 on (not for) my birthday. We all went down to Florida to say goodbye. The day after we flew home (the day after his cremation) a giant mother hurricane followed us north through the Carolina’s; trashing everything in its path and finally raining record rains on Martha’s Vineyard (home). In Paris, a year later I changed his character to a hippie chick named Alice and the location to Santa Fe; but my soulful older brother is still all over this song like a cheap suit.”

The sun shines on this funeral the same as on a birth
The way it shines on everything that happens here on Earth.
It rolls across the western sky and back into the sea
And spends the day’s last rays upon this fucked-up family.
So long old pal.

The last time I saw Alice she was leaving Santa Fe
With a bunch of round-eyed Buddhists in a killer Chevrolet.
Said they turned her out of Texas, yeah, she burned ’em down back home.
Now she’s wild with expectation on the edge of the unknown. 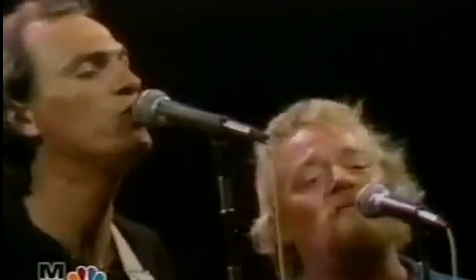 James Taylor: “The idea is of somebody who can’t get home, who can’t find home late in their lives. As you get older- and I’m pushing 50—you grasp that the loneliness of the human condition stems from a wholeness from which we seem separated. Consensus, just the sense of connection with other people, feels so great, and it motivates an awful lot of what we do. The more successful or thwarted you are as an isolated individual, the more you need reconnection.”

They brought her back on a Friday night, same day I was born.
We sent her up the smoke stack and back into the storm.
She blew up over the San Juan mountains and spent herself at last.
The threat of heavy weather, that was what she knew the best.

It woke me up on a Sunday an hour before the sun.
It had me watching the headlights out on highway 591
‘Til I stepped into my trousers, ‘til I pulled my big boots on.
I walked out on the Mesa and I stumbled on this song. 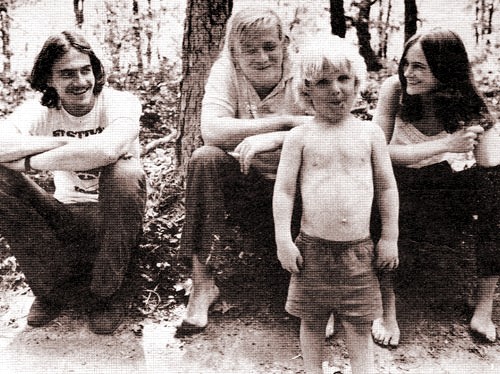 James made a rare slip in taste in a creating a video in which he portrays the details of this song literally—the old lover Alice (played by Barbara Hershey), the Moonies, the Chevy, the mesa—you get it all, premasticated and spoon-fed. I watched it once, and I’m sorry I did. The only thing it’s good for is to deplete the magic from a magical song. I’m not going to give you the link for it. Go find it yourself if you must.

James says the song is about striving for reconnection. Well, even that’s pinning it down too much for me. Those so-beautiful, so evocative lines – “Oh it’s enough to be on your way/It’s enough just to cover ground/It’s enough to be moving on.”–what do they evoke? Lots of sadness, lots of love, lots of regret, a very strong desire to find some reconciliation with the pain of the loss. I’d rather not parse it. The song is best left with its magic.  I’m best left with my love and my longing.

My  grandchildren are all good siblings, but they’re normal kids. When I see them squabble over whose turn it is to clear the table, say harsh words to each other, raise their voices in anger, I feel a physical pain in my gut. That most treasured gift of a sibling. Who can appreciate how precious it is?