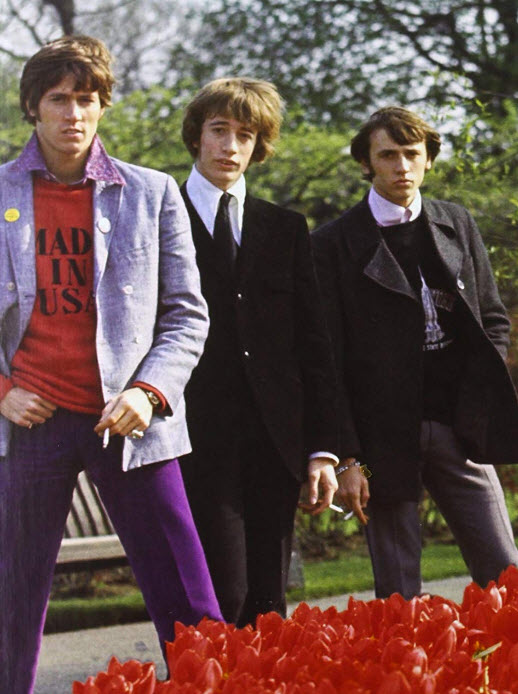 I know, I say The Bee Gees and your eyes roll and you start to snicker, conjuring up sounds of bung-jaga-jaga- jaga and sights of a studly Italian undulating cockily down the street in flared white pants so tight you can see his gjamidanker. 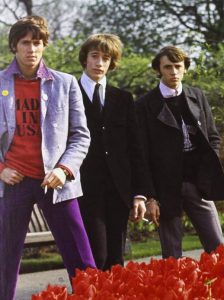 I’m talking about the other Bee Gees. The ones who once upon a time were compared favorably with, ahem, The Beatles. Yes, Virginia, really.

You see, les frères Gibbs used to be sound like three white Australian brothers. Before they started sounding like three black American sis-tahs.

So unroll those eyeballs, cowboys and Indians, and listen to the tale of The Bee Gees, Incarnation #1.

Barry (b 1946) and twins Robin (b 1949) and Maurice (inexplicably also b 1949) were b’ed on the Isle of Man. In 1958 the parents moved to Australia (I think because they wanted a daughter), where the boys drank a lot of milk, underwent puberty, and sang together so well they had their own Brisbanean TV show. (Here’s an example, but I’m warning you, I couldn’t sleep for a couple of nights after watching it, so use your own judgment.) But they had their eyes on the big-time, which in 1966 was good old England. So back they went.

The England to which they returned was producing a new brand of ‘pop’ music: ‘Strawberry Fields Forever’/’Penny Lane’, ‘Let’s Spend the Night Together’/’Ruby Tuesday’, ‘Whiter Shade of Pale’. America was in its original flush of psychedelia – ‘Purple Haze’, ‘Light My Fire’, ‘Somebody to Love’. 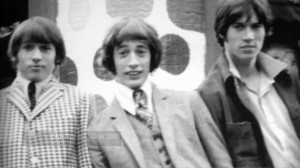 The Bee Gees will ever be indelibly engraved in your minds and ears as those silly guys in the embarrassing clothes making the whole world bounce to dance rhythms, with their high harmonies and funk beat. But for those of us who remember the 1960s better than the late 1970s (don’t ask), The Bee Gees were something wholly other. You don’t believe me? Here’s a quote from Lillian Roxon’s prototypical “Rock Encyclopedia” (1971):

…Their first single, ‘New York Mining Disaster’ …was like having a wonderful new Beatles single out on the market. For those who were bewailing the loss of the comparatively uncomplicated pre-Sergeant Pepper Beatles, the Bee Gees were a godsend and their first album a delight. …They sounded more like the Beatles than the Beatles ever did and … they wrote songs considerably better than the Beatles had done that early in their career.

Huh? Are we talking about the same guys? 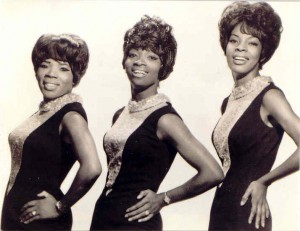 Well, yes. See, when the Bee Gees hit the radio in mid-1967, they were decidedly Old School. ‘Words’ and ’To Love Somebody’ sounded more like ‘Norwegian Wood’ ‘We Can Work It Out’ than did ‘All You Need is Love’ and ‘Lucy in the Sky with Diamonds’. Sure, we loved our head music. But there were also those daytime hours when your mind was lucid and you wanted to hear something pretty.

They had this string of hits in 1967-68 that took a back seat to none, not even that group they followed in the encyclopedia alphabetically (I don’t mean Jeff Beck). ‘New York Mining Disaster, 1941’, ‘To Love Somebody’, ‘Holiday’, ‘Words’, ‘I Started a Joke’, ‘Massachusetts’, ‘I’ve Gotta Get a Message to You’, ‘I Can’t See Nobody’, ‘World’. Each one a gem, carefully crafted, exquisitely orchestrated, flawlessly performed, with a strong, memorable melody, and lyrics ranging from the poetic to the enigmatic to the self-consciously cryptic.

It’s true, their lyrics were a lot more convincing after you’d smoked a few: 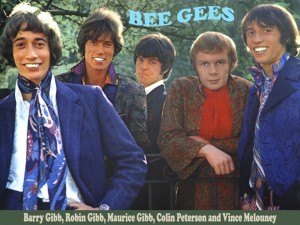 Millions of eyes can see
Yet why am I so blind
When the someone else is me
It’s unkind, it’s unkind

As impressive as their recordings were, they couldn’t duplicate the lush, extravagant productions live. By 1969 they’d split up, regrouped a year later, floundered for five years till The Plague of 1977, when young people on both sides of the ocean began to display inexplicable weekly episodes of convulsive twitching, what subsequently became known as The Saturday Night Fever. The rest, as they say, is hysteria.

107: The Association, ‘Everything That Touches You’