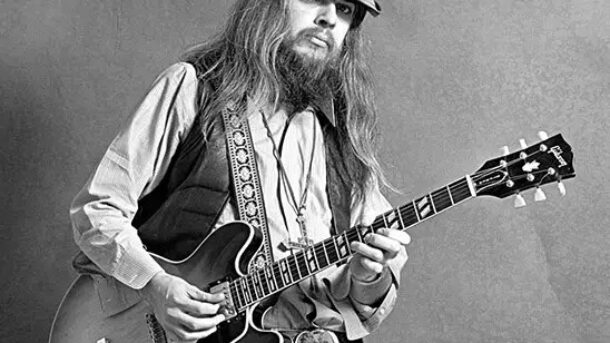 Leon Russell, ‘A Song for You’  (original)

Los Angeles circa 1970 was rock’s Medici Florence. Seemed like every time you turned around some new whippersnapper was tossing off a classic for the ages.

The truth is, when Leon Russell’s first album came out in February 1970, the only thing we knew about him at the time was that he was the music man behind Joe Cocker’s spasticism; and some of that music, like Cocker’s version of Delta Woman, was pretty darn fine. 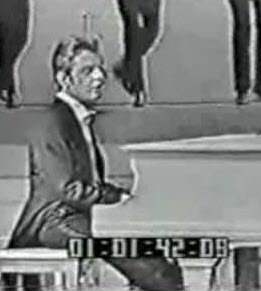 We had no idea that Leon (b. 1942) was Phil Spector’s pianist in the classic Wall of Sound era, that he was instrumental in arranging Tina Turner’s ‘River Deep – Mountain High’ (what George Harrison called “a perfect record”), that he had played on The Byrds’s ‘Mr Tambourine Man’ and Gary Lewis’s ‘This Diamond Ring’. To tell the truth, we had forgotten his sterling performances from 1964-5 on Shindig of songs such as ‘Jambalaya‘ (compare this to ‘Honky Tonk Woman’ five years later), or ‘Roll Over, Beethoven’ (wearing tails!). 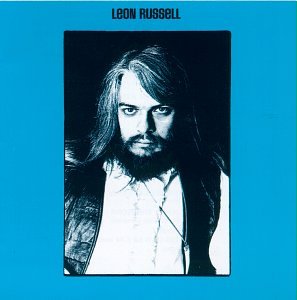 What we did know when that eponymous first album was released in 1970 was that on the back cover it said he was assisted in the recording by George Harrison, Ringo Starr, Charlie Watts, Bill Wyman, Eric Clapton, and Stevie Winwood, along with an aristocratic cadre of studio musicians. In 1970, that kind of stuff just didn’t happen. Stars stuck to their own solar systems. This was by far the most impressive assemblage of luminaries on a single album (outstripping even that on Stephen Stills’ first solo LP). Know what? It might still hold that honor today, ‘The Last Waltz’ and ‘We Are the World’ notwithstanding.

A year later, he produced and played on the only original song Dylan recorded in a two year period, ‘Watching the River Flow‘. Having fun wasn’t usually part of Dylan’s repertoire at that point, but this is a great good-time cut, with Leon written all over it. During the same period, Leon was also playing with B.B. King, Eric Clapton, George Harrison, and in the Bangladesh concert. 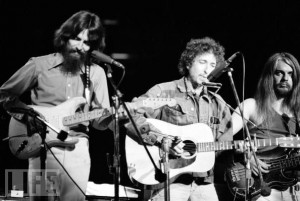 He had a hit album in 1972, “Carney”, and a hit single ‘Tight Rope‘. But then his career went spotty, and he spent the 1980s outside the music business. Even after he returned to producing, recording and touring, he remained in the shadows, till Elton John decided to repay a musical debt. In 2010, Elton John asked him to co-write and co-record a double CD called “The Union“, with guests such as Booker T. Jones ‘(Green Onions’), Neil Young (‘I Am a Child’) and Brian Wilson (‘Surfing USA’). Here’s their single ‘If It Wasn’t’ for Bad.’ Earlier this year (2011) Leon was inducted into the Rock & Roll Hall of Fame. 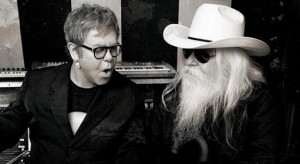 But for me, Leon is all about that first album. It brought us oh so many hours of listening pleasure, and remains for me one of the most evocative of the era, especially three songs that justify Hall of Famehood, each and every one. I recently discovered videos of two of them from an eye-, ear- and mind-boggling recording session in 1971. It was broadcast on PBS and seems to have been called either “Leon Russell & Friends – ‘Homewood Sessions’,” or “Live at Vine Street Theater, Hollywood, California, USA”, or “Vine Street Theater presents Homewood”. Well I don’t care what you call it, it’s downright marvelous. ‘They’ say it was the first national stereo rock-and-roll TV broadcast. That’s nice, but what makes it memorable is – well, you just look at these clips, and you don’t need me to tell you what’s memorable about them. 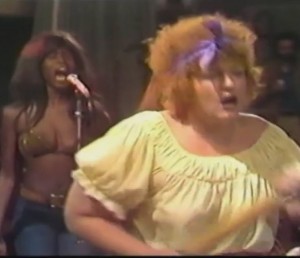 You got Leon’s own version of ‘Delta Lady’, complete with a false start, the ugliest shirt every sewn by humankind, an unforgettable puff on a cigarette in slo-mo, and at the end the most bizarre silence you’ll ever not hear.

You got his cover of The Rolling Stones ‘Honky Tonk Woman’, where you hardly see Leon, but you do see an awful lot of Sweet Emily and a very potent rolling pin. I didn’t realize till I saw this that Leon wrote the song in some sense. I won’t tell you whether I prefer this cover or the original. I’ll let you guess. 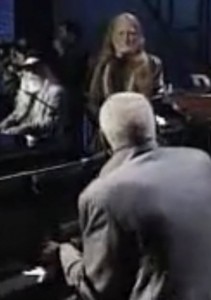 Elton John sang it as an intro to a medley of his own songs “Blue Eyes” and “I Guess That’s Why They Call It the Blues” on his 1986 tour.

‘A Song for You’ became a signature song for Willie Nelson.

But the best cover of it I know, hands down, is that by Ray Charles. It’s hard to believe the song wasn’t written for him. It also won him a Grammy Award.

But omigosh, look at this one I found. A stunning duet between James Taylor and the wonderful Allison Janney! (CJ, from “The West Wing”) from the Matthew Perry sitcom called “Mr.Sunshine”. 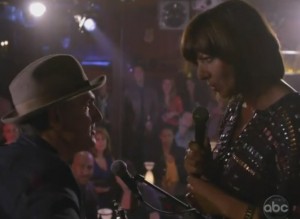 Here are the original album versions of the three pantheon songs from that album— ‘Delta Lady‘, the sublime ‘Roll Away the Stone‘ (“Roll away the stone, don’t leave me here all alone; resurrect me and protect me, don’t leave me laying here—what will they do in 2000 years?”) and that most beautiful, soul-rending love song, ‘A Song for You’, the original LP version.

What is this song that attracts so many people to it? It’s a bitch to sing, even worse to play. It hasn’t got a cute little memorable hook or a jingly-sticky rhyme.

I’ve been so many places in my life and time
I’ve sung a lot of songs, I’ve made some bad rhymes
I’ve acted out my life in stages with ten thousand people watching
But we’re alone now, and I’m singing this song for you.

I know your image of me is what I hope to be
I treated you unkindly, but darling can’t you see
There’s no one more important to me, baby can’t you please see through me?
‘Cause we’re alone now and I’m singing this song for you.

You taught me precious secrets of the truth withholding nothing;
You came out in front when I was hiding. But now I’m so much better
And if my words don’t come together, listen to the melody
Cause my love is in there hiding…